“Dad, you don’t have to shovel water” my oldest son, Walt, bragged. We were visiting their home in Seattle; 50-degree sunshine never felt better. Minnesota had been transformed into a vast ice skating rink and I was feeling sorry for myself. “It’s only frozen water” I shrugged. “We get more year-round sunshine. No volcanoes or earthquakes either.” Cheap shot?

Minnesotans rationalize during the dark days of winter; it’s the snow/ice/cold tax we pay for living in a resort. The next few weeks we’ll dodge a bitter bullet.

My maps and models show a consistently mild and moderating Pacific influence into mid-January. A few pops of cold, but no prolonged polar punches. 30s in mid-January, when it could easily be minus 30?

Yesterday’s instant snow globe weather is about as exciting as it’s going to get anytime soon. Expect low to mid 30s New Year’s Day and Thursday; 10-15F above average.

We may yet get spanked in late January and February. Yes, it’s way too early to let your guard down. 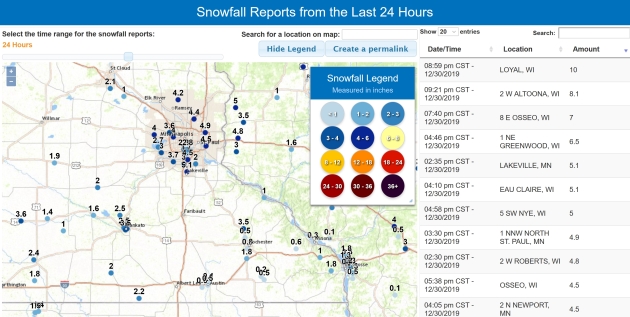 Snowfall Amounts. Before I fell off the couch into a coma last night I saw mostly 3-5″ amounts for the immediate Twin Cities, less to the south and west. The Twin Cities National Weather Service has the latest amounts. 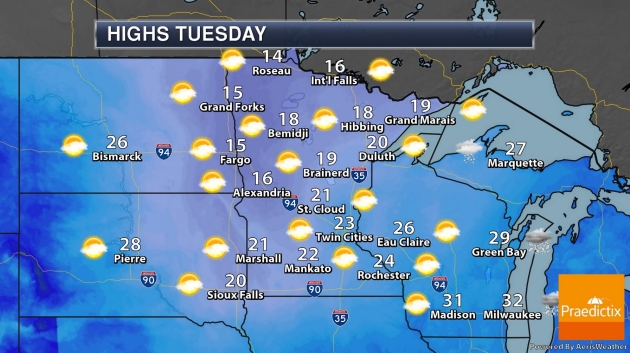 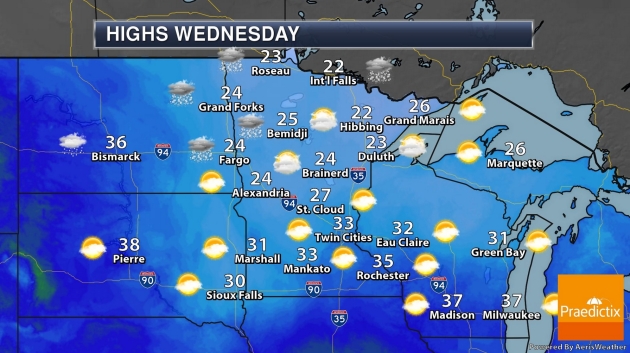 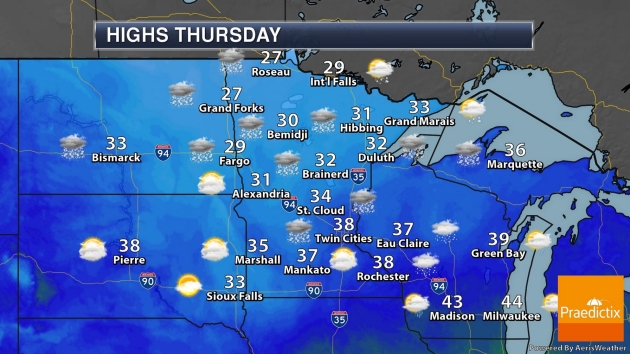 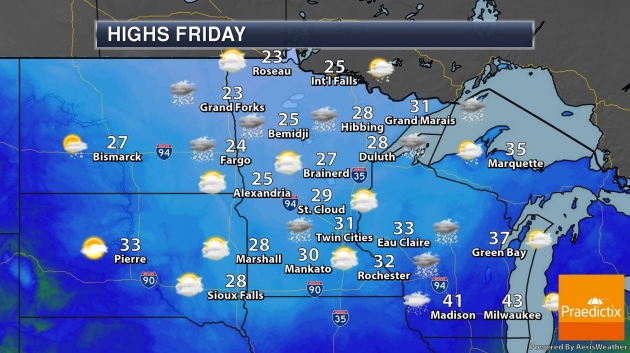 Not Bad for Early January. Considering we could easily be -10 to -20F right now remind me not to complain about 20s and 30s – above zero. Twin Cities ECMWF temperature forecast above: WeatherBell. 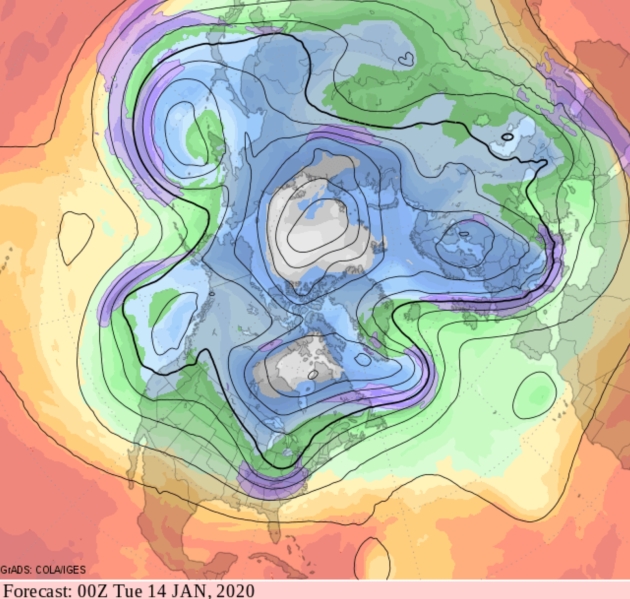 A Nagging Pacific Influence. I don’t see any evidence of a warm/dry ridge of high pressure setting up over Alaska and the western USA, which would have the effect of consistently guiding arctic air into Minnesota. If anything persistent storminess from Alaska to California may bias our winds aloft to blow predominately from the west or southwest, keeping temperatures above average into mid-January. After that all bets are off. 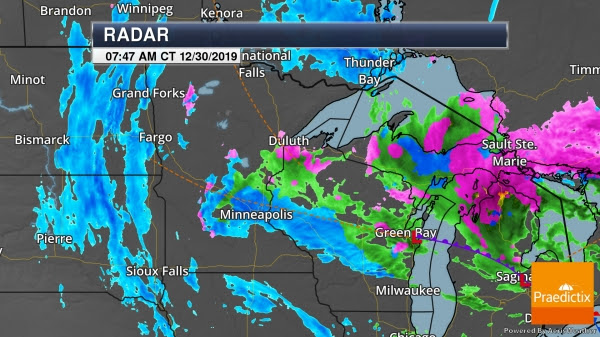 Morning Radar. Snow continues to fall across the upper Midwest this morning, mixing with some drizzle or rain at times. Snowfall totals reported this morning so far include 15.8” in Armour (SD), 12.8” in Grand Forks (ND), and 12.3” in Fargo (ND). While precipitation has changed over to snow in the Twin Cities, it is raining this morning in Green Bay (WI) with freezing rain reported in Pellston (MI). 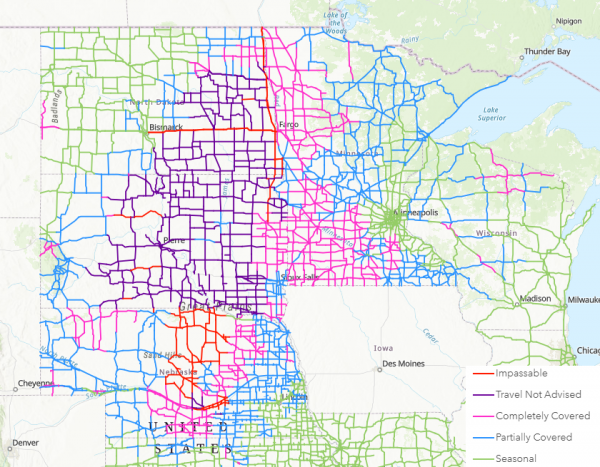 Road Closures. Due to the heavy snow and blizzard conditions, several major interstates are closed including I-29 from Watertown (SD) to the Canadian border, I-94 in North Dakota from Bismarck to Fargo, I-90 in South Dakota westbound from Mitchell to Wall and eastbound from Rapid City Exit 67 to Mitchell, and I-80 in Nebraska between Grand Island and Lexington. 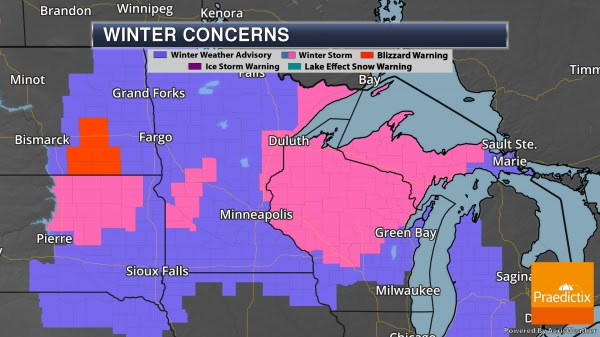 Upper Midwest Winter Storm Alerts. Numerous winter storm concerns continue across the Upper Midwest this morning due to the snow and strong winds. Blizzard Warnings are in place across portions of southeastern North Dakota. Breaking down some of the alerts in place: 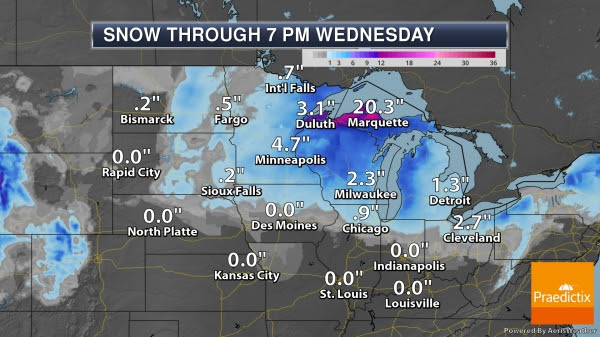 Upper Midwest Snow. The heaviest additional snow will fall in the western Great Lakes over the next couple of days, with over a foot possible in portions of northern Wisconsin and the U.P. of Michigan. 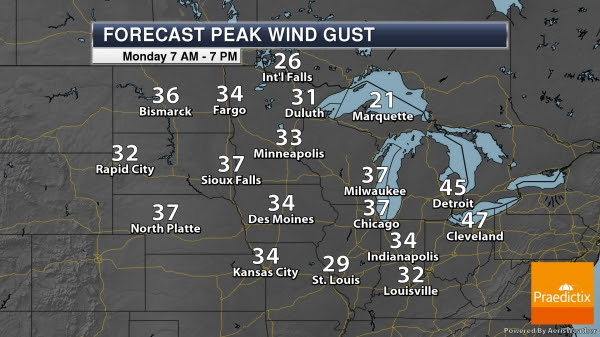 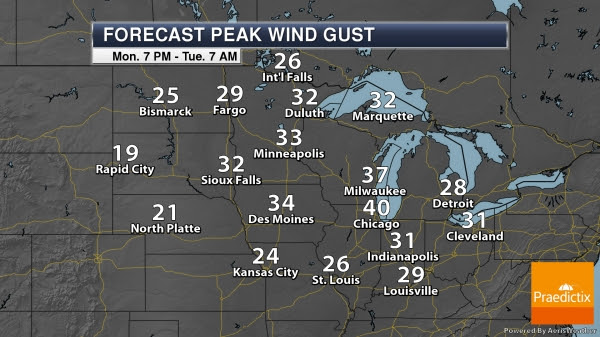 Strong Winds. Winds will continue to be blustery today in association with this system, with wind gusts over 30 mph possible across a good portion of the upper Midwest. These winds will cause blowing snow issues where snow does fall, reducing visibility. 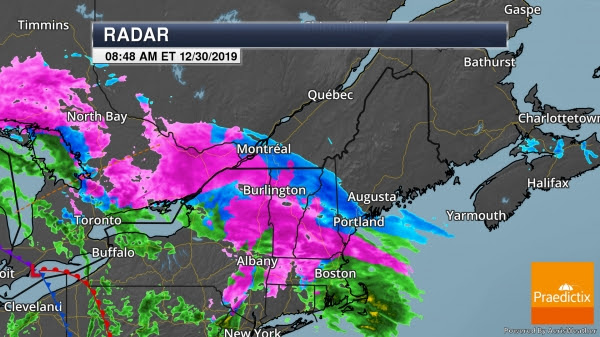 Second Low Out East. Meanwhile, a second low has formed near the East Coast and is expected to strengthen as it pushes offshore today. This system is helping to produce rain, snow, and ice in the Northeast this morning. Icing has been occurring on trees and powerlines in Massachusetts, with reports of limbs starting to break. 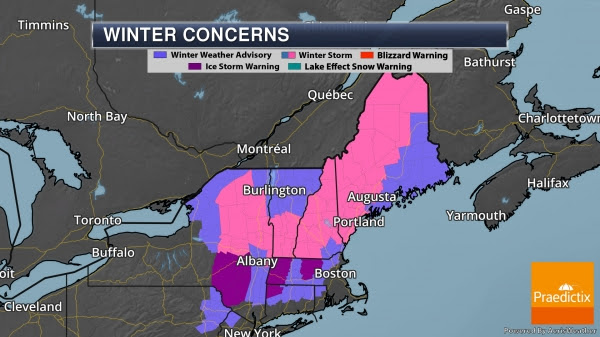 Winter Alerts In The Northeast. Ice will continue to be a big concern across portions of New York, Connecticut, and Massachusetts today where Ice Storm Warnings are in place. In these locations, ice accumulation of at least a quarter to a half an inch is possible, with some locations receiving up to three-quarters of an inch. All Ice Storm Warnings go through either 1 AM or 7 AM Tuesday. Other alerts in the Northeast include: 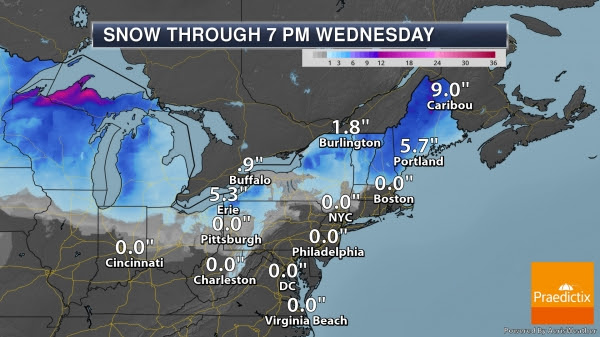 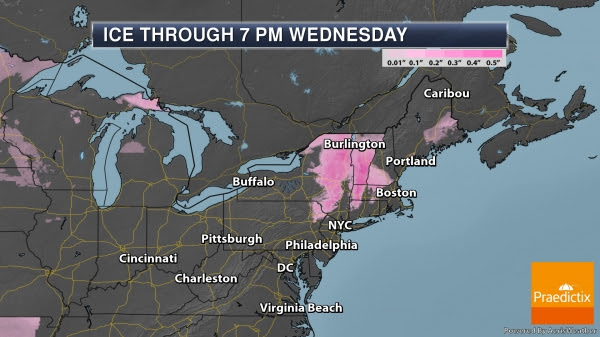 Expected Snow And Ice. Snowfall tallies of over a half a foot will be possible across portions of New England through the end of 2019 which will impact travel across the region. The greater concern will be where heavy ice occurs from New York State into Massachusetts, where once again accumulations of at least a quarter to a half an inch are possible. This will cause nearly impossible travel and could cause power outages and damage across the region.

Minnesota Chalks Up the Wettest Year on Record. In case you missed this good summary at Star Tribune; here’s an excerpt: “…It appears 2019 will wind up being the wettest year on record in Minnesota, busting the record set in 1977, said Kenny Blumenfeld, senior climatologist in the State Climate Office. Although the entire state was significantly wetter than normal, the southern half was the soggiest with at least a dozen areas setting individual records, he said. By mid-December, Rochester had recorded 54.28 inches of precipitation — 10 inches more than the record set in 1990. And by mid-December, Minneapolis-St. Paul inched above the 2016 record of 40.32 inches. The wet conditions forced many farmers to plant later than usual, said Dave Nicolai, University of Minnesota Extension educator for crops. “Some never got their crops in the ground,” he said. “To be most successful, you like to plant starting in April, and then have a good fall...” 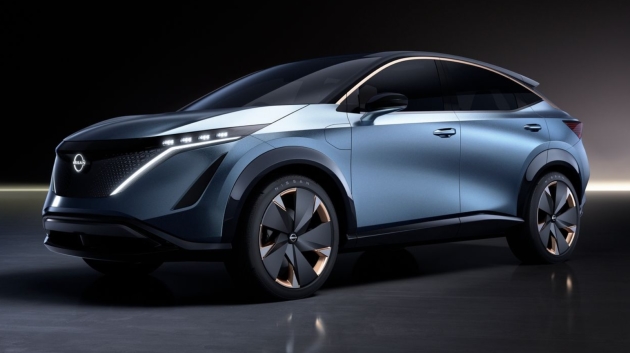 Why 2020 is the Turning Point for Electric Cars. Dan Neil reports for The Wall Street Journal (paywall); here’s the intro: “In an industry caught flat-footed by the rise of Tesla and China’s skyrocketing vehicle-emissions mandates of the past decade, 2020 came to be seen as the horizon of reasonable expectations, when global OEMs, startups, suppliers and investors could finally join the EV fray. That time has arrived… almost. A slew of new battery-electrics will debut next year, most as 2021 models. Some announced prices could change; and the to-market dates for some products may be delayed, depending on outside events, like Brexit. Note: Earlier this week, Congress declined to expand the federal tax credit for EVs, which sets auto makers’ eligibility for the credit at 200,000 sales. The Tesla Model Y isn’t eligible for the credit. Here’s what’s coming…” 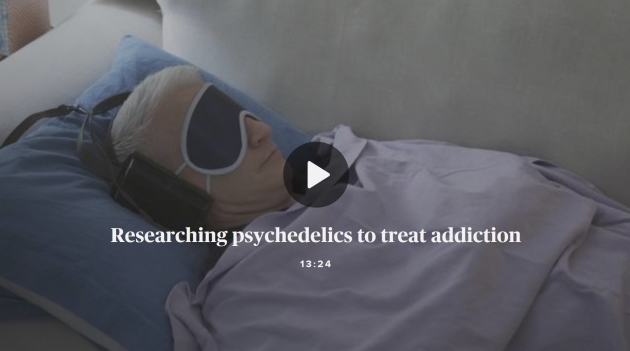 Psychedelic Drugs May Help Treatment of Addiction, Depression and Anxiety. Magic mushrooms anyone? Here’s an excerpt of an interview at CBS News 60 Minutes: “For most, psychedelic drugs conjure up images of the 1960’s, hippies tripping out on LSD or magic mushrooms. But, as Anderson Cooper reported earlier this year, these powerful, mind-altering substances are now being studied seriously by scientists inside some of the country’s foremost medical research centers. They’re being used to treat depression, anxiety and addiction.  The early results are impressive, as are the experiences of the studies’ volunteers who go on a six-hour, sometimes terrifying, but often life-changing psychedelic journey deep into their own minds…” 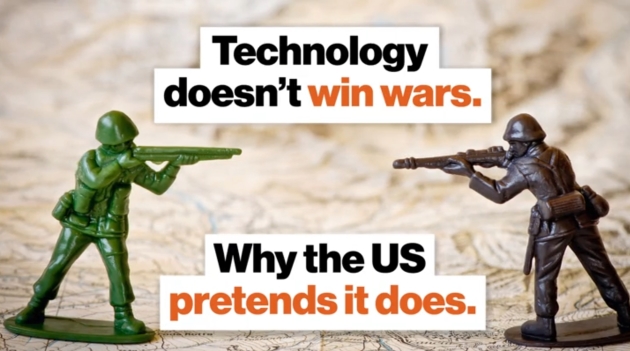 Technology Doesn’t Win Wars. Why the US Pretends It Does. A post at Big Think made me….think. Here’s an overview: “Number eight on Big Think’s list this year says the future will not even look like wars to the traditional mind. The worst threat is systemic. It’s growing entropy in the global system. Today, when Russia wants to shake up Europe — the world — its operatives weaponize refugees. That is, by bombing civilian centers, they create an avalanche of refugees, which, in turn, creates Brexit and the rise of right-wing national parties that want to disembowel the European Union. High-tech is not the savior that many futurists pretend it is when it comes to warfare. As a matter of fact, McFate contends, much of our investment in it is ludicrous. “You know, we have not fought, we have not had a strategic dogfight since the Korean War. So why do we need more fighter jets? I do not know. . . . We’ve spent $1.5 trillion on the F-35. That’s more than Russia’s GDP...”

2″ snow on the ground at MSP International.

December 31, 1999: It’s a balmy end to the 2nd millennium over Minnesota, with temperatures in the 30s over central and southern Minnesota near midnight.

December 31, 1937: Damage is done by a flood at Grand Marais, while 18 inches of snow is dumped on Grand Portage.

December 31, 1913: New Ulm has its fortieth consecutive day without precipitation. 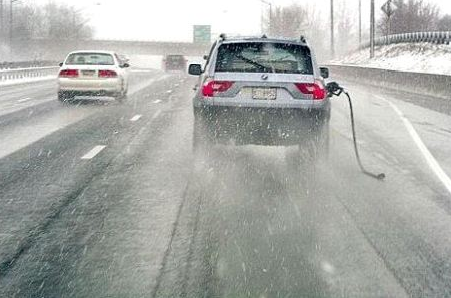 SUVs Are Worse for the Climate Than You Ever Imagined. WIRED.com (paywall) reports: “…According to a summary analysis of a report by the International Energy Agency that was released on November 13, SUVs are the second-biggest cause of the rise in global carbon dioxide emissions during the past decade. Only the power sector is a bigger contributor. The analysis, which surprised even its own authors, found a dramatic shift toward SUVs. In 2010, one in five vehicles sold was an SUV; today it’s two in five. “As a result, there are now over 200 million SUVs around the world, up from about 35 million in 2010,” the agency reports. The preference for heavier SUVs is offsetting fuel-efficiency improvements in smaller cars and carbon savings from the growing popularity of electric cars. “If SUV drivers were a nation, they would rank seventh in the world for carbon emissions,” reported The Guardian…” 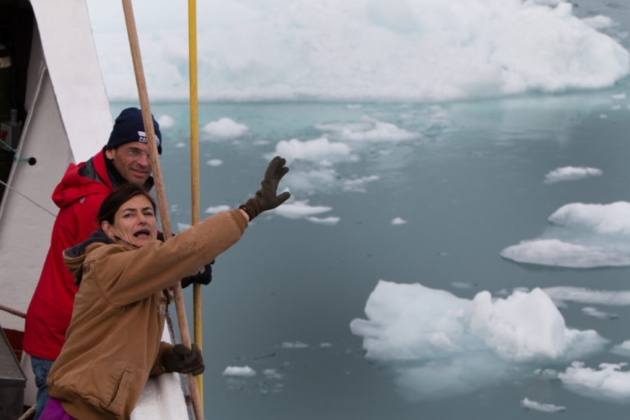 Greenland Ice Loss is at “Worst Case Scenario” Levels, Study Finds. A press release from UCI News caught my eye: “Greenland is losing ice mass seven times faster than in the 1990s, a pace that matches the Intergovernmental Panel on Climate Change’s high-end warming scenario – in which 400 million people would be exposed to coastal flooding by 2100, 40 million more than in the mid-range prediction. The alarming update resulted from the Ice Sheet Mass Balance Intercomparison Exercise, a project involving nearly 100 polar scientists from 50 international institutions, among them two from the University of California, Irvine. IMBIE researchers combined 26 separate surveys to compute changes in the mass of Greenland’s ice sheet between 1992 and 2018. Altogether, data from 11 different satellite missions were used, including measurements of the ice sheet’s changing volume, flow and gravity...”

Photo credit: “The more remarkable result from this study is that Greenland is melting along the lines of the highest rate of warming examined by climate models. In other words, we’re in the worst-case scenario,” says Eric Rignot, UCI professor and chair of Earth system science, shown here in Greenland with fellow researcher Isabella Velicogna, also a UCI professor of Earth system science.” Maria Stenzel / For UCI. 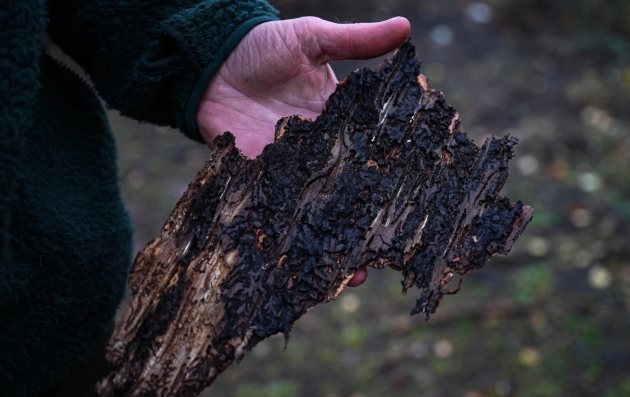 Climate Change Strikes at the Heart of German Identity: The Woods. Here’s a clip from a story at The New York Times (paywall): “...In the 1980s, fears that German forests were dying from acid rain — when the word “Waldsterben,” or “forest death,” was coined — led to widespread protests and galvanized the popularity of the nascent Greens party. Although laws to curb toxic emissions eventually led to a decrease in pollutants and a revival of the woods, that period left its mark on the trees that survived. More recently, rising temperatures caused by climate change are threatening German forests. Severe drought in 2018 followed by another exceptionally dry summer this year left trees across Germany vulnerable to bark beetles that lay their eggs just beneath the bark, which has killed trees and left large swaths of normally lush, green hillsides a sickly brown…”

Photo credit: “Cornelius Meyer-Stork, a private forester, showing the trails left by a beetle under the bark of a spruce tree.” Lena Mucha for The New York Times.