Mapping America’s Most Extreme Weather Since 2000 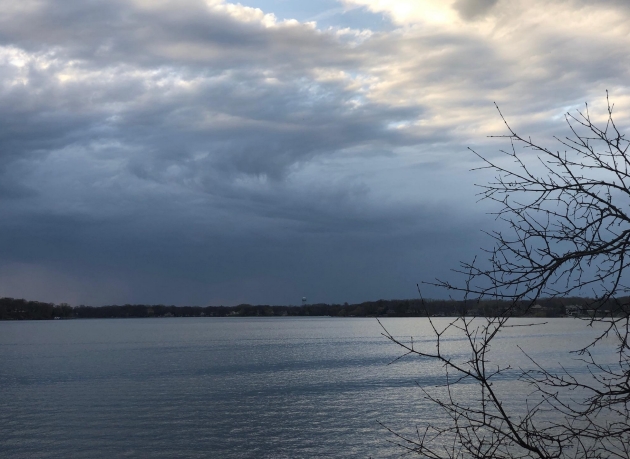 Trending Cool and Soggy This Week

“In the spring, I have counted 136 different kinds of weather inside of 24 hours” said Mark Twain. I’m wondering out loud if he was visiting Minnesota when he uttered that memorable quote?

Minnesotans like their 7-Day Outlook super-sized. We tolerate the slings and arrows of outrageous weather, never failing to rationalize along the way. Even lousy weather has an upside!

Today’s rain? A perfect indoor, get-stuff-done day. Unusually cool start to May? Perfect. Too soggy to work in the yard and too chilly for tornadoes. It’s easy once you get rolling.

Today may be the wettest day of the week, as a southern storm brushes us with a few hours of rain. Skies dry out a bit the latter half of the week, and right now Saturday appears to be the nicer, milder day of the weekend, with a shot at 60s. Another aggravating push of Canadian air sparks a shower Saturday night and an outbreak of sweatshirts Sunday. We won’t be overheating anytime soon.

Silver linings? Sure! No sirens. No pulsating red blobs on Doppler or beachball-size hail. Yay. 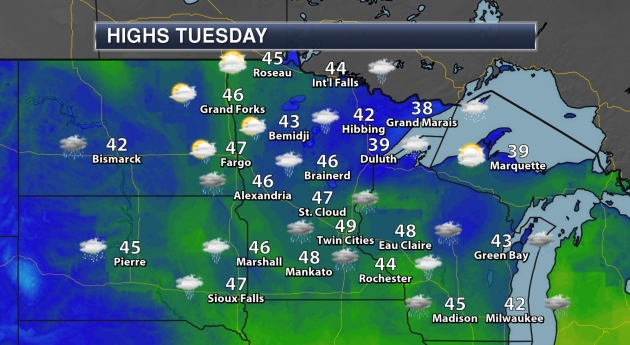 Cool Finish to April. Temperatures run 10-15F cooler than average today with periods of light rain and drizzle. At the rate we’re going those May flowers are going to be enormous. Map: Praedictix and AerisWeather. 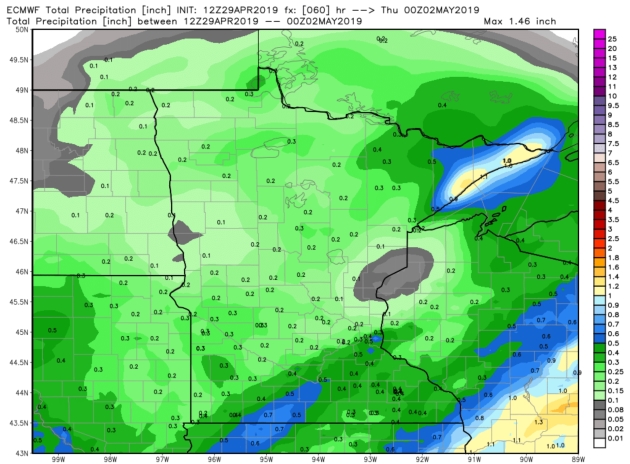 ECMWF Predicted Rainfall by Wednesday Evening. The European model predicts about .2 to .5″ rain between now and 00z Thursday; heaviest amounts southern and eastern suburbs, with well over an inch of rain for the southeastern third of Wisconsin. Map: WeatherBell. 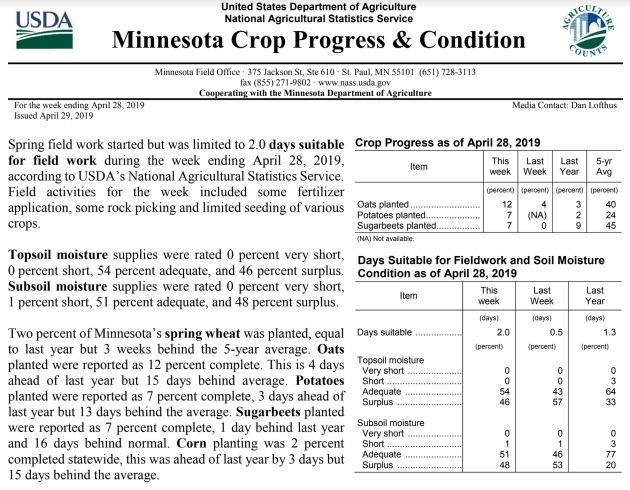 Things I Thought I Would Never See. In this week’s edition of Minnesota WeatherTalk Dr. Mark Seeley summarized a list of head-turning weather events that made him connect the dots; here’s an excerpt: “…At some recent public meetings about climate change in Minnesota I was asked by members of the audience to describe some characteristic changes in weather and climate that I never thought I would see. After contemplating for a while I came up with a brief list:

Mapping America’s Wicked Weather and Deadly Disasters. The Washington Post has a good summary of extreme weather in the recent record; here’s an excerpt: “Hurricanes and tornadoes are woven into the fabric of life in certain parts of the country. Storm cellars and tornado drills are common in the Midwest. On the gulf and east coasts, hurricane evacuation route signs line major streets and highways. These areas are home to some of the most violent storms in the world. “Tornado Alley” stretches from the Dakotas south to Texas. Warm, moist air from the Gulf travels north and collides with cold, dry air from Canada and the Rockies. But the deadliest tornado outbreak in decades — meteorologists called it a “Super Outbreak” — took place in “Dixie Alley” in Alabama in 2011. More than 350 tornadoes were confirmed, and 324 people died…” 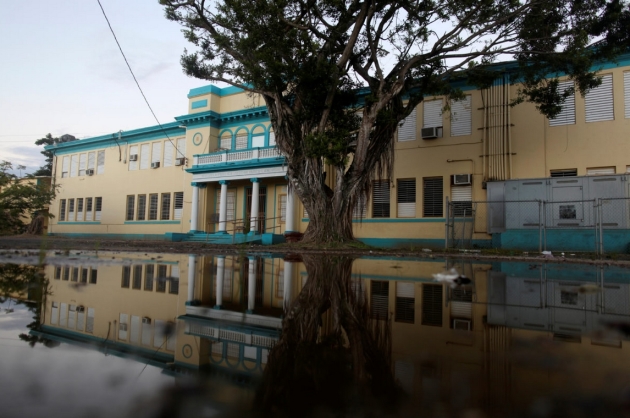 Photo credit: “A shut-down elementary school is reflected in a puddle of water in Toa Baja, Puerto Rico, on February 5, 2018.” Photo by Alvin Baez/Reuters. 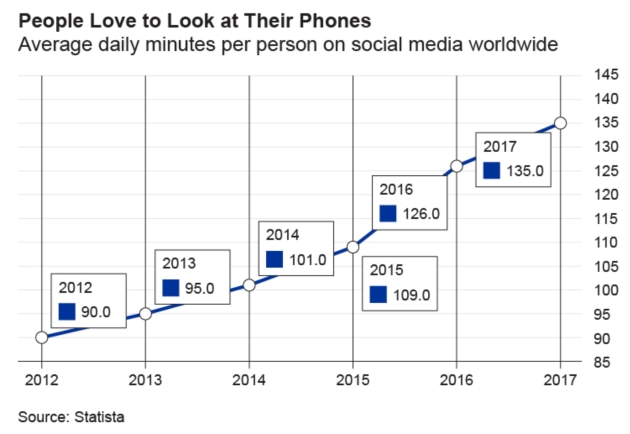 Decline in Human Empathy Creates Global Risks  in the “Age of Anger”. Just leave me alone with my best friend, my smartphone, OK? Bloomberg has the post: “…While technological change always causes stress, the Fourth Industrial Revolution is marked by a blurring of the line between the human and the technological, according to the Global Risks Report 2019, published by the World Economic Forum in partnership with Zurich Insurance Group. The result of this blurring has been an increase in loneliness, rising polarization and a corresponding decline in empathy. And unlike previous waves of globalization, today’s feelings of discontent aren’t just confined to displaced workers. For business leaders, the challenge is to create a corporate culture of openness and diversity that is responsive to the concerns of employees and customers. “We are going to need new ways of managing technology and globalization that respond to the insecurity that many people experience,” says John Scott, Head of Sustainability Risk at Zurich Insurance Group…” 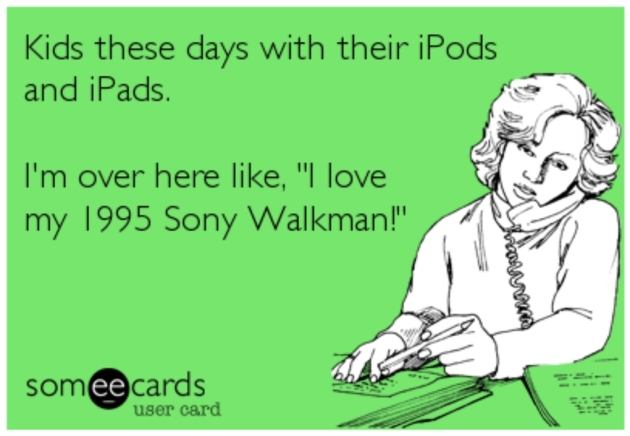 Children Under 5 Should Get No More Than 1 Hour of Screen Time Every Day, WHO Says. ABC News has details: “The World Health Organization (WHO) has released new guidelines on the importance of physical activity and adequate sleep for young children, which includes recommendations on how little screen time they should get. One of the most striking suggestions a WHO panel of experts suggested is that children under the age of five should get no more than one hour of “sedentary” screen time, adding that “less is better.” When sedentary, children should be engaging in activities such as reading, storytelling, puzzles and singing with a caregiver instead, the agency said in a press release published Wednesday...” 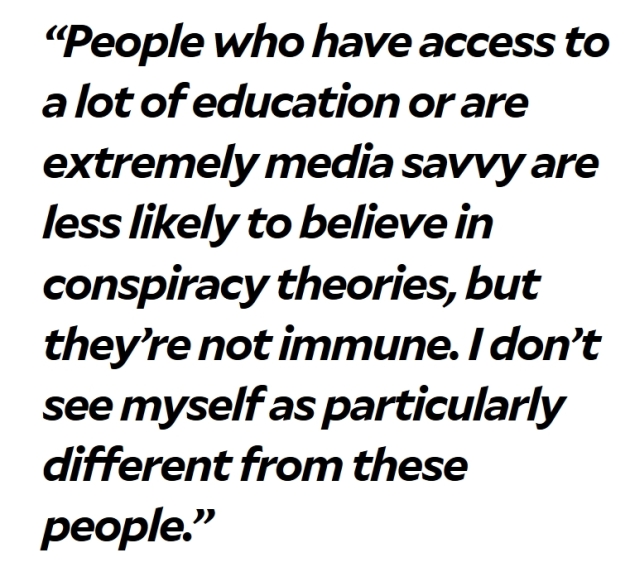 Conspiracy Theores Are More Destructive Than Ever Before. There’s a Reason For That. A post at Mother Jones offers up food for though: “…There are a bunch of reasons for that. One is that statistically, most Americans believe in at least one conspiracy theory. People who have access to a lot of education or are extremely media savvy are less likely to believe in conspiracy theories, but they’re not immune. So I don’t see myself as particularly different from these people. I like to say that we’re all in the pool, some of us are just in a deeper end of the pool. That was part of the reason to be empathetic. There’s so much writing about conspiracy theories and subcultures that is really snarky, and I just think there’s been enough of that. I don’t think I need to add anything to that genre.  Some of it too is that I write about this a lot. I think people who get involved in conspiracy theories are often doing it in response to social and economic inequalities…”

58 F. high in the Twin Cities on Monday.

April 30, 2004: After a high temperature of 91 on the previous day in the Twin Cities, the mercury tumbles to 47 degrees by the morning. St. Cloud sheds 50 degrees over 12 hours.

Along One Minnesota River, Ice and Walleyes Signal Changing Climate. Here’s an excerpt from a story at Star Tribune: “…It’s a telling symptom of climate change, and just one of countless ways that rising temperatures are altering the lives of Minnesotans and the landscape of their state. Around the world, climate change is forcing people to revamp the way they fight wildfires, prepare for typhoons, nurture their crops through drought and manage coastal flooding. In Minnesota, the same forces are changing the state’s response to spring floods, the way foresters choose trees for timber and which lakefronts can have summer cabins or resorts. Ice is just one indicator. Across Minnesota, lakes are losing up to four days of ice every 10 years, according to the state climatology office. And it’s not just Minnesota: Rivers and lakes across the continent are tending to freeze later and thaw earlier...”

Photo credit: “Anglers hit the Rainy River as walleye spawn in spring. But this year, for the first time, the DNR imposed catch-and-release rules on the border river.” Photo by Brian Peterson, Star Tribune.

Carbon Offsets. I fly Delta, and now there’s a fairly easy way to calculate carbon offsets to make up for CO2 released during your next flight. Here’s a clip from Delta: “At Delta, we know that reducing our impact on the environment will improve the sustainability of our planet as well as our business. When it comes to air travel, jet fuel is by far the biggest source of carbon emissions. In fact, it makes up more than 98.5% of our total carbon footprint. In addition to improving fuel-saving measures by ordering new, more efficient planes, adding winglets, and streamlining operations, we partner with programs, like The Nature Conservancy®, that strive to stop deforestation and promote alternative energy. Through The Nature Conservancy, you can now view the environmental impact of your travels and make a donation to support forest protection projects that produce measurable benefits to the atmosphere.  To learn more about the many ways Delta is working to protect the environment, visit delta.com/responsibility.“

U.S. Air Force: We Need $5 Billion to Fix Weather-Damaged Bases. Defense One has the story; here’s the intro: “The U.S. Air Force says it needs nearly $5 billion over the next three years to rebuild bases in Florida and Nebraska severely damaged by weather in the past six months. If it does not receive $1.2 billion of those funds by June for repairs at Tyndall Air Force Base and Offutt Air Force Base, service officials warned they would be forced to cut projects at bases in 18 states (here’s the list) and cancel 18,000 pilot training hours. “We desperately need the supplemental funding to recover from the natural disasters that hammered Tyndall and Offutt,” Air Force Secretary Heather Wilson said Wednesday at Heritage Foundation event in Washington…” 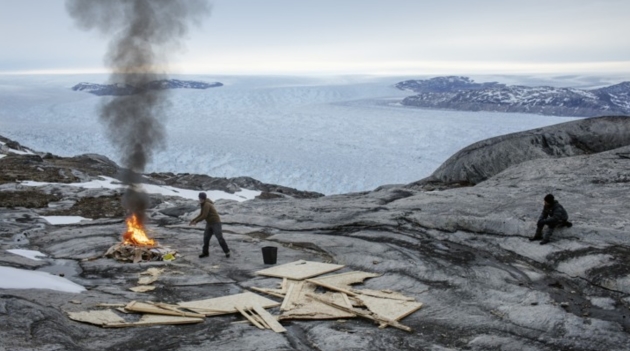 Greenland is Falling Apart. Ice melt appears to be accelerating, according to new research highlighted at The Atlantic“…The paper casts the transformation of the Greenland Ice Sheet as one of the profound geological shifts of our time. Scientists measure the mass of ice sheets in “gigatons”—each unit equal to 1 billion metric tons, or roughly the same amount of water that New York or Los Angeles uses in a year. Greenland, according to the study, has lost 4,976 gigatons of water since 1972. That’s enough water to fill 16 trillion bathtubs or 1.3 quadrillion gallon jugs. That much water weighs about 11 quadrillion pounds. (A quadrillion is 1 with 15 zeros after it.) More worryingly, the paper finds that Greenland lost about half of that ice—roughly 2,200 gigatons—in the years between 2010 and 2018. The ice sheet has also failed to gain mass in any year since 1998…”

Photo credit: “NASA researchers burn leftover wood on the Helheim Glacier, which is one of the fastest-moving ice floes in Greenland.” Lucas Jackson / Reuters. 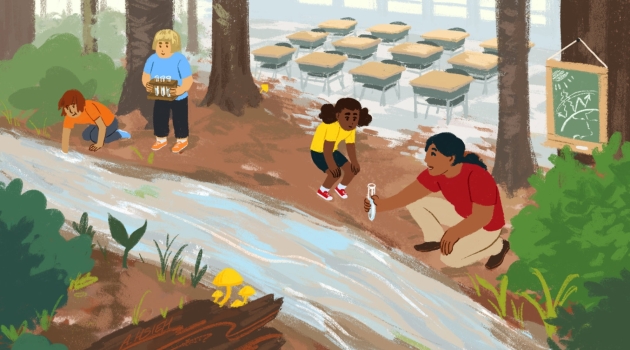 8 Ways to Teach Climate Change in Almost Any Classroom. NPR has the story: “NPR/Ipsos conducted a national poll recently and found that more than 8 in 10 teachers — and a similar majority of parents — support teaching kids about climate change. But in reality, it’s not always happening: Fewer than half of K-12 teachers told us that they talk about climate change with their children or students. Again, parents were about the same. The top reason that teachers gave in our poll for not covering climate change? “It’s not related to the subjects I teach,” 65% said…”

Golman Sachs, Bank of England and Treasury Targeted by Climate Activists in London. Reuters has details: “More than 300 environmental activists sowed chaos through London’s financial district on Thursday, gluing themselves to the stock exchange and blocking roads outside the Bank of England and major banks such as Goldman Sachs. The Extinction Rebellion group has spent 11 days disrupting London in a bid to force Britain to act to help avert what they cast as a climate cataclysm. On Thursday, they turned their attention to London’s financial institutions and the City – home to more international banks than any other and the global center for foreign exchange trading…”

Oil & Gas Majors Using Free Rehab Labor: Headlines and links via Climate Nexus: “At least two major oil companies have benefited from free–and likely illegal–labor provided to them by drug rehab companies forcing addicts to work long hours as part of a faulty therapy program, according to a new investigation. A year-long Reveal and Center for Investigative Reporting collaboration shows how Texas rehab nonprofit Cenikor contracted with Shell and Exxon, among other giant corporations, to send addicts to work for free on a refinery and building an oil platform as part of “work-based therapy.” The company received $7 million from work contracts last year, while participants received little actual therapy and often suffered serious injuries on the job. “It’s like the closest thing to slavery,” former Cenikor participant Logan Tullier, who worked 10-hour days at a refinery in dangerously hot conditions, told Reveal. “We were making them all the money.” (Reveal)