Let’s see. MSNBC, CNN or Fox News. Which network will tell me what I want to hear? It’s much the same way with weather models, which have their own unique quirks and foibles.

Some models work better in specific scenarios, but there is no such thing as a perfect model. They are approximate simulations of how the atmosphere SHOULD behave, but reality never quite works out that way to a tee. We want and expect perfection in an imperfect world.

That’s why I’m skeptical of all Covid-19 models. Keep an open mind; follow the data and trends.

Proving once again that Mother Nature needs to be sedated, showers are in the forecast from tonight into Monday. No continuous rains – nothing like the 2-4 inches that soaked the area last Sunday. But I can’t guarantee dry weather until next Tuesday (of course!)

Cooler weather returns late next week. And yes, it’s ABSOLUTELY appropriate to wear a light jacket over your short shorts. 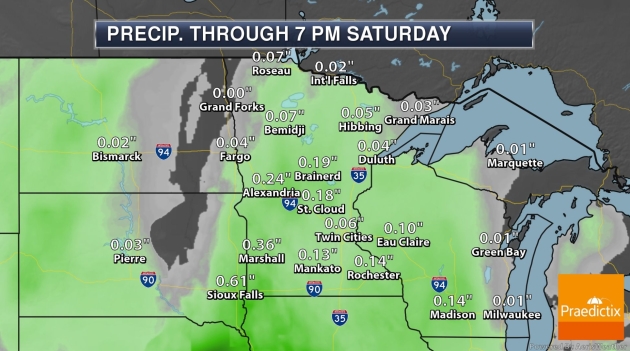 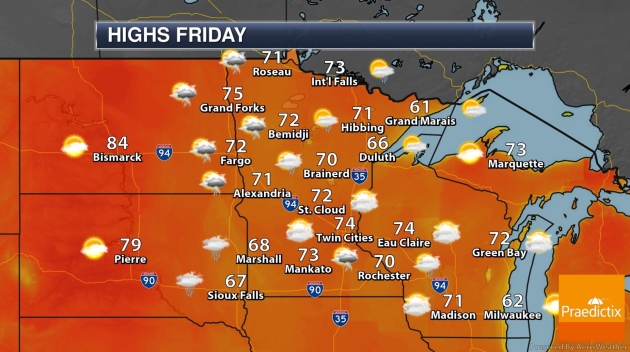 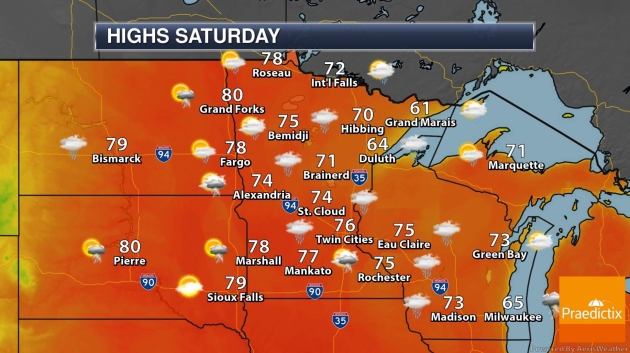 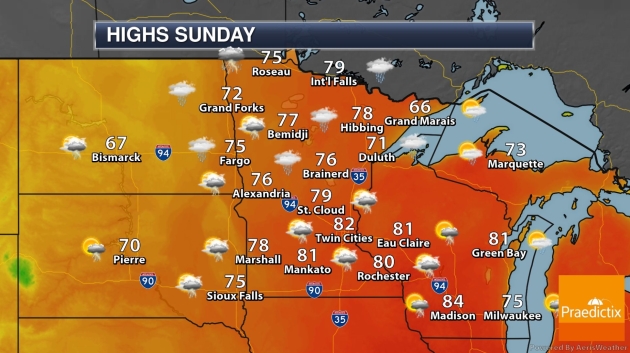 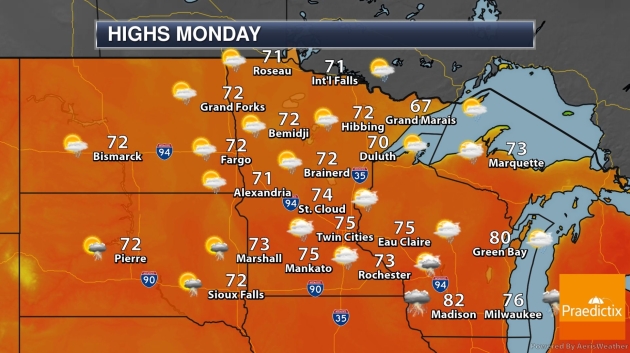 Showery Spells. I wish I could be more optimistic, but it’s a holiday weekend, and – hold on – what did you expect? Saturday should be the wettest day, Sunday the warmest day with the best chance of a little sunshine (and a stray T-storm). A few hours of showers are possible Memorial Day. Tuesday will be nice…naturally. Image: windy.com. 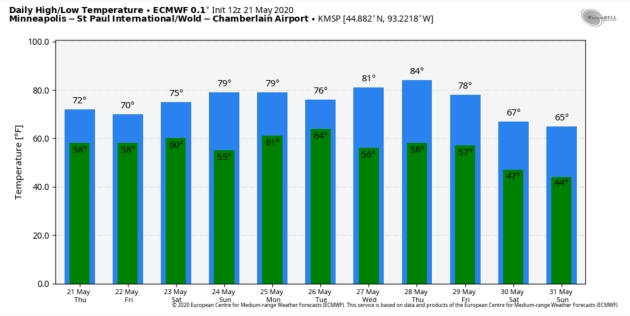 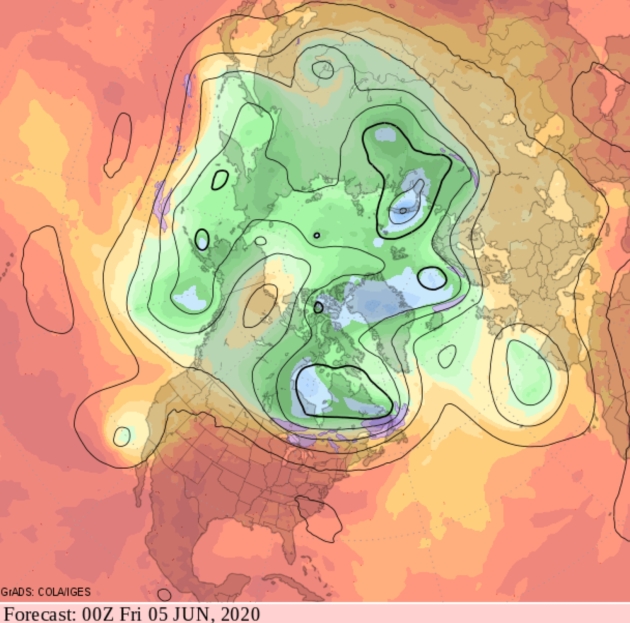 The Edge of Steamy. The forecast for the evening of June 4 suggests significant heat from the central Rockies and Plains into the Midwest and much of the eastern half of the USA as a more summerlike pattern sets up across the USA. An amazingly persistent closed low over eastern Canada will trigger unusually chilly weather from Hudson Bay to the Canadian Maritimes.

Busy Atlantic Hurricane Season Predicted for 2020. Well, that’s not good, especially with the background hum of pandemic that flavors every decision. Here’s an excerpt from NOAA: “An above-normal 2020 Atlantic hurricane season is expected, according to forecasters with NOAA’s Climate Prediction Center, a division of the National Weather Service. The outlook predicts a 60% chance of an above-normal season, a 30% chance of a near-normal season and only a 10% chance of a below-normal season. The Atlantic hurricane season runs from June 1 through November 30. NOAA’s Climate Prediction Center is forecasting a likely range of 13 to 19 named storms (winds of 39 mph or higher), of which 6 to 10 could become hurricanes (winds of 74 mph or higher), including 3 to 6 major hurricanes (category 3, 4 or 5; with winds of 111 mph or higher). NOAA provides these ranges with a 70% confidence. An average hurricane season produces 12 named storms, of which 6 become hurricanes, including 3 major hurricanes...” 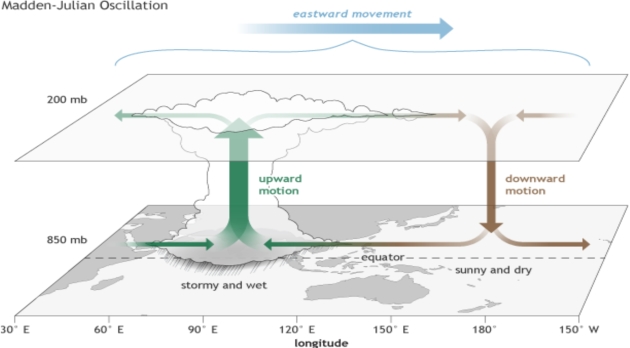 Madden-Julian Oscillation Could Help Provide Earlier Forecasts for U.S. Tornadoes. A story at WeatherNation caught my eye: “…While past studies have also found a correlation between the MJO and tornado activity in the United States from March through July, the new study found a much more robust correlation during the late Spring and early Summer (May through July). A summary of the correlation posted on NOAA’s Atlantic Oceanographic and Meteorological Laboratory (AOML) page states,”When the moving thunderstorm is passing across Indonesia to the Pacific, the air across Central America becomes very dry due to changes in the Walker circulation that moves upper-level air westward and lower-level air eastward across the tropical Pacific. The drying air across Central America redirects the low-level air flow to enhance the supply of warm and moist air into the U.S. east of the Rockies...” 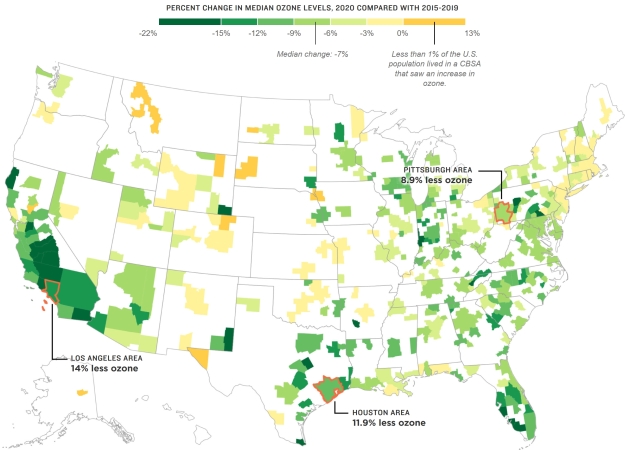 Why Air Pollution Hasn’t Fallen More With Everyone Drivng Less. NPR has details: “…In some cities, the amount of one pollutant, ozone, has barely decreased compared with levels over the past five years, despite traffic reductions of more than 40%. Ground-level ozone, or smog, occurs when the chemicals emitted by cars, trucks, factories and other sources react with sunlight and heat. NPR analyzed more than half a million air pollution measurements reported to the EPA from more than 900 air monitoring sites around the country. We compared the median ozone levels detected this spring with levels found during the comparable period over the past five years. Our analysis revealed that, in the vast majority of places, ozone pollution decreased by 15% or less, a clear indication that improving air quality will take much more than cleaning up tailpipes of passenger cars…”

Map credit: “The areas shown in color represent 335 out of 929 core-based statistical areas (CBSA) in the United States, which are one or more counties, anchored by an urban center of 10,000 people or more. Areas in white are either CBSAs with no available data, too little data or areas outside of CBSAs. Places where ozone increased in 2020 had low ozone levels between 2015 and 2019.”

Study Shows Vulnerable Populations With Less Education More Like to Believe, Share Misinformation. Critical-thinking skills have never been more important than they are today, according to new research from The University of Kansas: “As the COVID-19 pandemic threatens public health around the world, misinformation regarding its treatment, causes and cures has abounded. A University of Kansas study has found that vulnerable populations, often those most severely affected by such crises, are also at a high risk of consuming and sharing such misinformation online, while also struggling to assess information’s credibility. What’s more, when misinformation is related to a topic people are personally involved in, they are more likely to believe and share it. KU journalism and mass communications researchers conducted a study in which they presented low-income, older African Americans a dubious health-related story, then conducted surveys and in-person interviews to learn more about how they assessed it…” 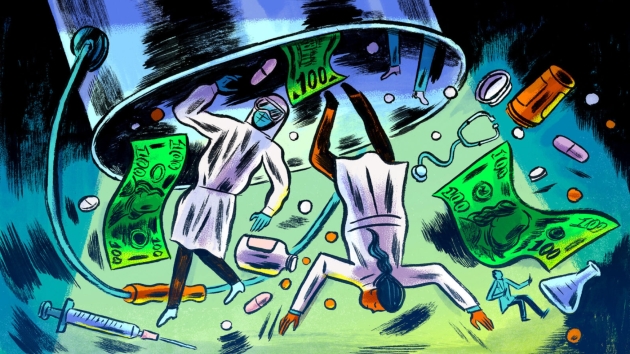 9 Ways Covid-19 May Forever Upend the U.S. Health Care Industry. Check out an interesting post at STAT; here’s an excerpt: “…Health care providers in the U.S. have been inching toward making more services available via telehealth for years. But health care leaders across the ideological spectrum agree: Covid-19 has pushed the inevitable telemedicine revolution forward by a decade, if not more, according to health care leaders. Chris Jennings, policy consultant and former health care adviser to the Obama and Clinton administrations: “There’s the assumption in primary care that you always had to have in-person contact, and that telemedicine would be unsatisfactory, or wouldn’t fill the void. That’s been exposed — actually, it’s safer, it’s quicker, and it’s easier...”

Restaurant of the Future? God help us – this is more car wash than restaurant, I fear. CNN Travel has details: “…One Japanese pub is taking a novel approach to customer safety. Visitors to Kichiri Shinjuku, a traditional Japanese-style pub known as an “izakaya,” are sprayed with a fine mist of disinfectant before they are allowed to enter. “We want customers to feel safe when they come inside,” spokeswoman Rieko Matsunaga told CNN. “This is geared to promote social distancing and prevent infections.” Upon arrival at the pub in the Shinjuku district of Tokyo, customers are greeted by a hostess on a monitor, who tells them to wash their hands and take their temperature with a thermometer. Next, they walk into what looks like an airport security scanner, where they are sprayed with a mist of chlorine-based disinfectant for 30 seconds...”

May 22, 2011: A strong EF-1 tornado with wind speeds up to 110 mph strikes north Minneapolis, causing extensive tree and structural damage. The tornado touched down in St. Louis Park and moved through north Minneapolis, lasting 14.25 miles before dissipating in Blaine after causing minor damage to the Anoka County Airport. The tornado reached a peak width of 1/2 mile.

May 22, 2001: Record cold high temperatures are set in over 30 cities in Minnesota, including a chilly 47 in the Twin Cities and 39 at Grand Rapids and Pine River. Half of an inch of snow falls at International Falls. 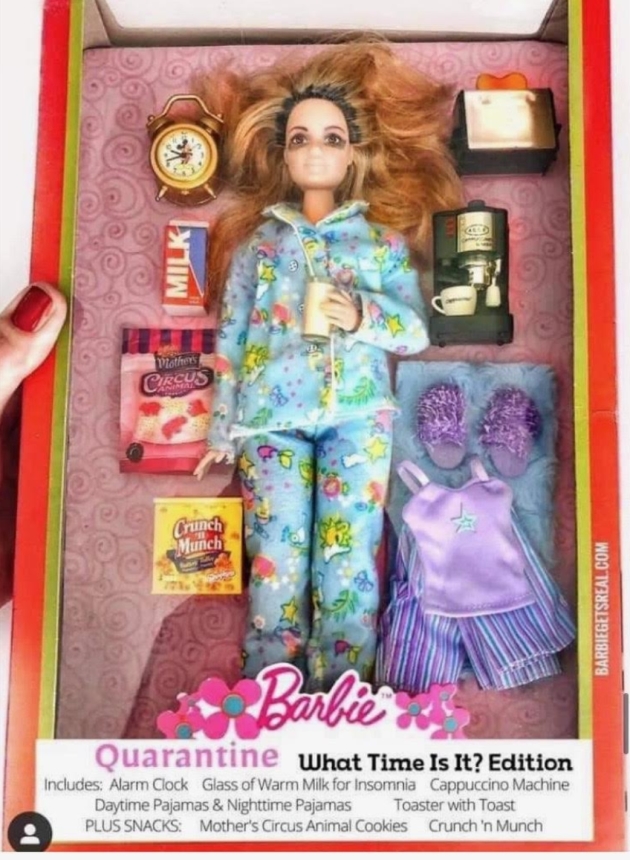 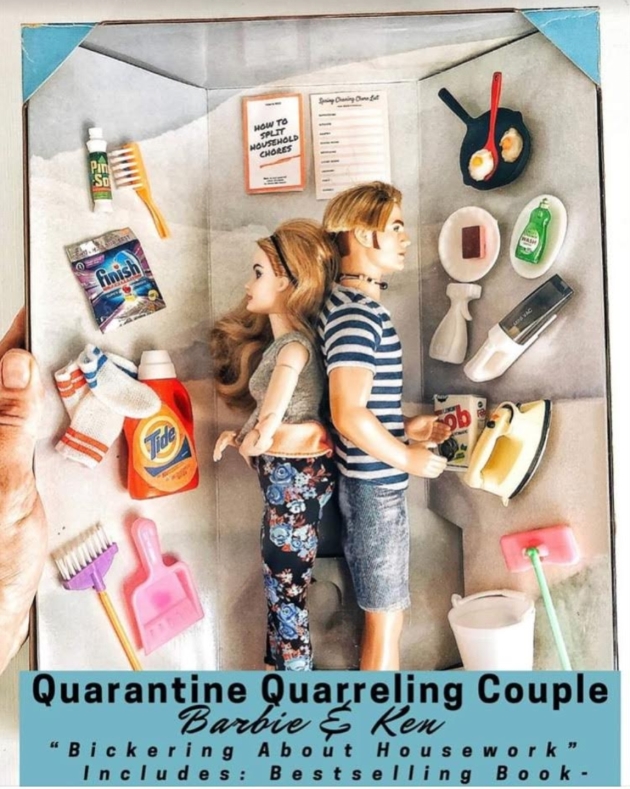 Creepy Dolls. My little sister sent me these images. She still likes to play with dolls, especially Quarantine Edition Barbie and Ken. God help us. 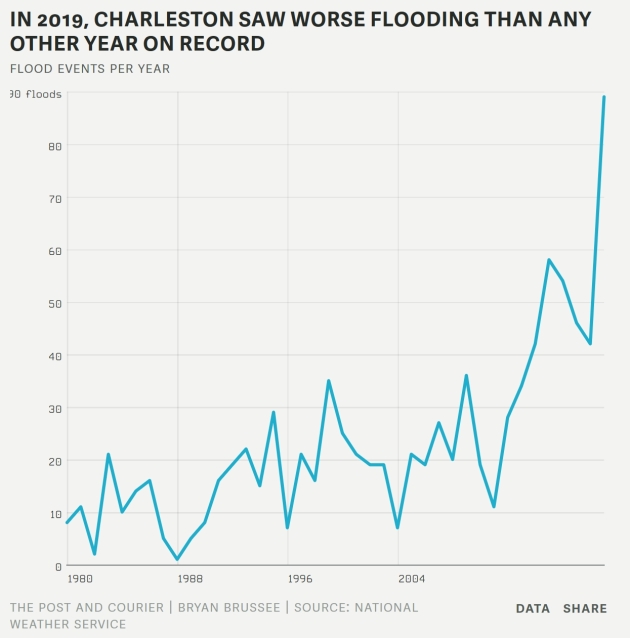 Rising Waters: The Real Story is Climate Speed. Postandcourier.com in Charleston, South Carolina has the first episode in a series; here’s a snippet: “A two-hour cloudburst drenched Charleston on Wednesday, turning downtown streets into swirling rivers. Nearly 5 inches fell over the city’s hospitals, turning the medical district into an island. Five inches fell on Johns Island, turning parking lots into lakes. It was a mess. And it’s not normal. Set aside the notion of climate change. The climate has always changed. The real story is about speed. The pace of change. From rain bombs to higher sea levels, the impacts are coming faster. This is as real as Wednesday’s storm. And the one four weeks ago. And so many others in the past five years. In the coming months, The Post and Courier will explore these accelerating forces and their many ripple effects...” 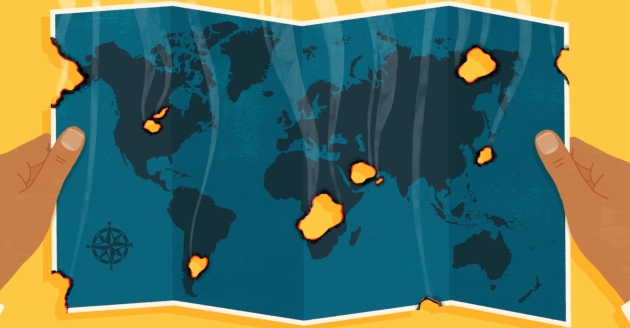 Why Some Spots on the Planet Are Heating Up Faster Than Others. The Washington Post reports: “…For example, temperatures in the Arctic summer — when the sun shines 24/7 — are typically moderated by sea ice, which reflects most of the sun’s rays back into space. But summertime ice cover at the pole has been rapidly shrinking. It’s now half a million square miles smaller than the average since 1981. More exposed ocean means more sunlight gets absorbed as heat, which melts the ice even further. This feedback loop is responsible for making the Arctic the fastest-warming place on the planet. Changes in one part of the planet can destabilize climate systems elsewhere. Scientists say the loss of sea ice in the waters north of Japan has triggered a chain reaction that threatens an entire Pacific ecosystem. Historically, when the ocean surface froze it would expel huge amounts of salt into the waters below, creating a dense, nutrient-rich current that flowed East across the Pacific…”

The Strongest, Most Dangerous Hurricanes Are Now Far More Likely Because of Climate Change, Study Shows. Capital Weather Gang has more details and perspective on the trends: “A new study provides observational evidence that the odds of major hurricanes around the world — Category 3, 4 and 5 storms — are increasing because of human-caused global warming. The implications of this finding, published Monday in the Proceedings of the National Academy of Sciences, are far-reaching for coastal residents, insurers and policymakers, as the most intense hurricanes cause the most damage. The study, by a group of researchers at the National Oceanic and Atmospheric Administration and the University of Wisconsin at Madison, builds on previous research that found a trend, though not a statistically robust one, toward stronger tropical cyclones. Tropical cyclones are a category of storms including hurricanes and typhoons worldwide...”

Summer Starting Earlier. Climate Central takes a look at the trends: “Spring is a transitional season with both warm and cold days, even in a warming climate. But long-term trends show that the arrival of summer-like temperatures is starting sooner across much of the U.S. These changes are beginning to warp the seasons as we know themーsqueezing out the winter chill and stretching the summer heat long before us. To investigate the onset of summer heat, Climate Central analyzed the first calendar day when local temperatures reach their average daily summer high, and how that first day may have changed since 1970. We found that 54% of cities recorded summer temperatures at least a week earlier, on average, than they did fifty years ago. The top 15 stations with the largest advances in the onset of summer temperatures all recorded summer heat arriving more than three weeks earlier...” 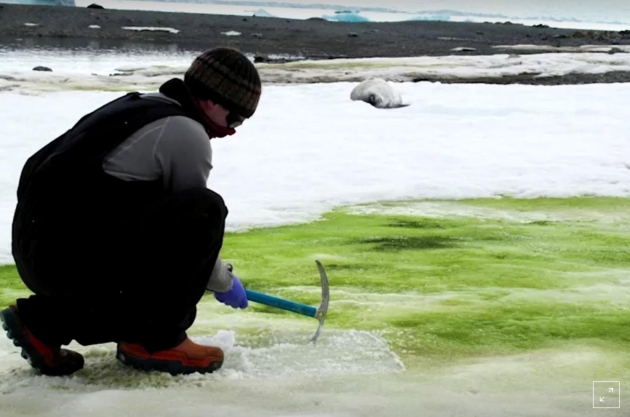 Climate Change Turning Antarctica’s Snow Green. Reuters has the story: “Antarctica conjures images of an unbroken white wilderness but blooms of algae are giving parts of the frozen continent an increasingly green tinge. Warming temperatures due to climate change are helping the formation and spread of “green snow” and it is becoming so prolific in places that it is even visible from space, according to new research published on Wednesday. While the presence of algae in Antarctica was noted by long-ago expeditions, such as the one undertaken by British explorer Ernest Shackleton, its full extent was unknown...”