Verkhoyansk, north of the Arctic Circle in northeastern Siberia, registered a daily high of 100.4 degrees on Saturday. If verified, this would be the northernmost 100-degree reading and warmest temperature ever recorded in the Arctic. Wildfires are accelerating the melting of permafrost, releasing more warming CO2 gases into the atmosphere. Verkhoyansk is located at 67 degrees north latitude. A warning sign?

Temperatures mellow later this week, with the next round of widespread showers and storms scheduled for Thursday PM into Friday. Skies should clear Saturday, with another hot jab of 90s next week. Long-range models hint at slight relief by the 4th of July, but there’s little doubt this will be a long, hot summer.

Weird weather: Saharan dust is being swept across the Atlantic Ocean by trade winds, dropping visibilities down to 3 miles on some Caribbean islands! 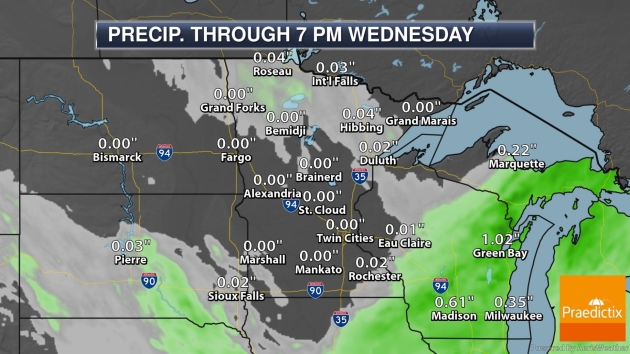 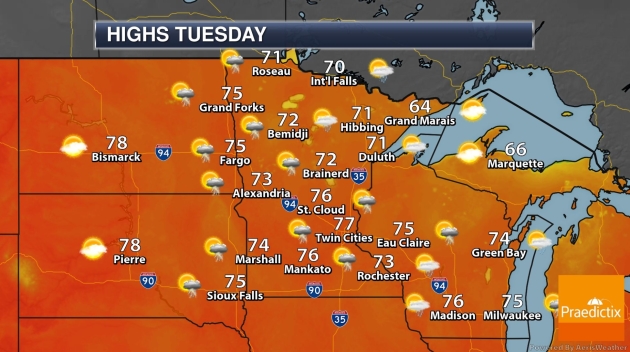 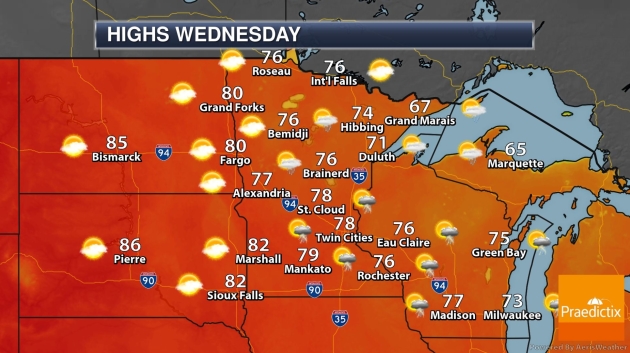 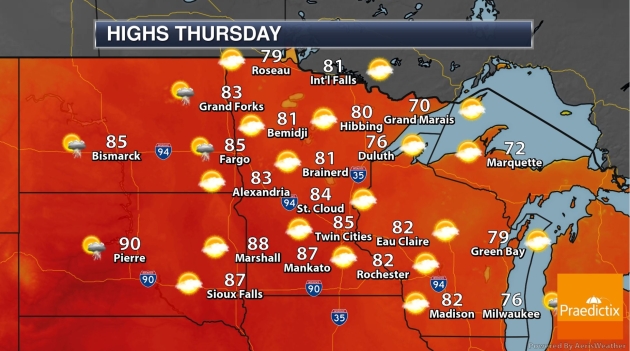 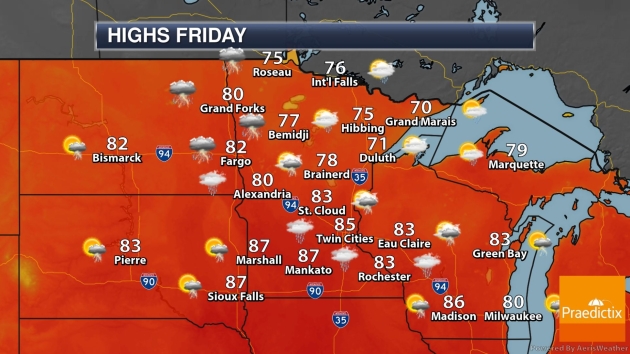 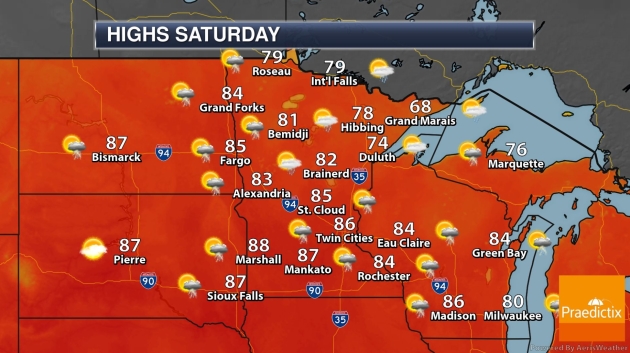 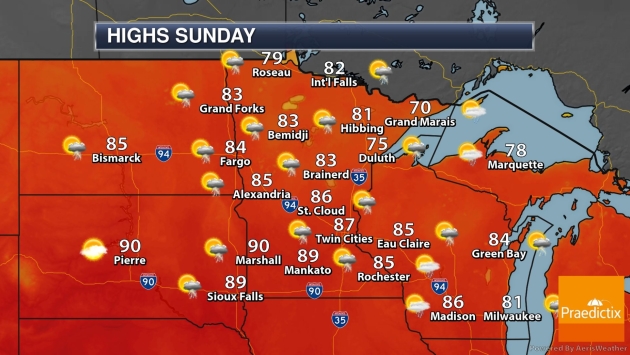 Warming Trend. This is about as cool and comfortable as it’s going to be looking out through at least the end of next week; 80s returning by Thursday with a healthy lawn watering Friday (probably the wettest day). Lake-worthy 80s return for the weekend with a shot at 90F next week.

Dry Bias for Central Minnesota. The latest June rainfall anomaly shows a 1-2″ rainfall deficit for the month from Duluth to Brainerd and St. Cloud. Map credit: Praedictix and AerisWeather.

Warm, Windblown June. Some interesting statistics from Dr. Mark Seeley at Minnesota WeatherTalk: “…The windiness continues to be remarkable for the month, though it has abated somewhat in the north. Many days have seen an average wind speed of 15 mph or greater, while most days have brought maximum wind gusts over 30 mph. The list below shows the number of days with wind gusts of 30 mph or greater:

Hottest Arctic Temperature Record Likely Set in Siberian Town. Capital Weather Gang has details: “A northeastern Siberian town is likely to have set a record for the highest temperature documented in the Arctic Circle, with a reading of 100.4 degrees (38 Celsius) recorded Saturday in Verkhoyansk, north of the Arctic Circle and about 3,000 miles east of Moscow. Records at that location have been kept since 1885. If verified, this would be the northernmost 100-degree reading ever observed, and the highest temperature on record in the Arctic, a region that is warming at more than twice the rate of the rest of the globe. On Sunday, the same location recorded a high temperature of 95.3 degrees (35.2 Celsius), showing the Saturday reading was not an anomaly. The average June high temperature in Verkhoyansk is just 68 degrees (20 Celsius)...” 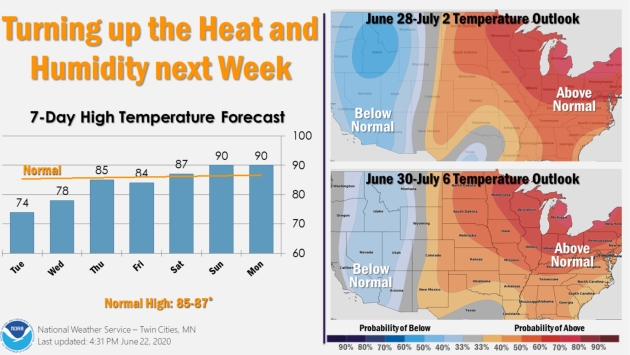 Looks Like Summer. Temperatures warm into the 80s later this week, and I suspect ECMWF (above) may be underestimating the level of warming for next week – I could see a few days above 90 6-10 days out. MSP Meteogram: WeatherBell. 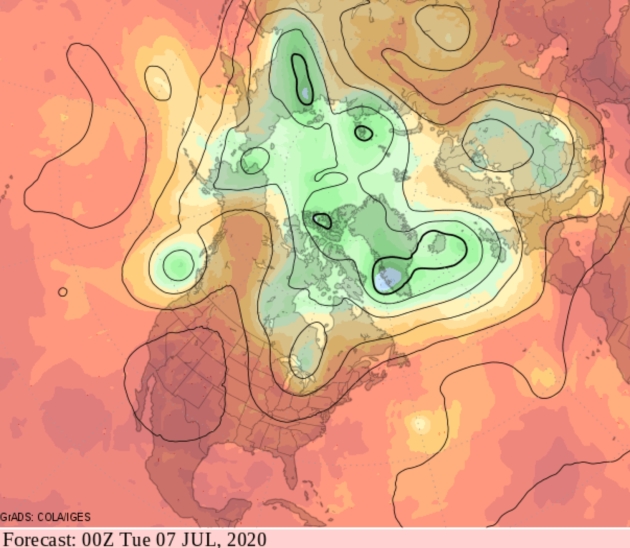 Toasty, Not Scorching. If the GFS model verifies for the evening of July 6 the epicenter of heat will be over the Intermountain West and Southwest, with a cooler bias for the Great Lakes and a few gently used cool fronts keeping the worst of the heat away from Minnesota.

The Senate Just Passed an Historic Environmental Bill. Here’s What’s In It. Here’s an excerpt of an interview at PBS News Hour: “…I want to talk about the politics here. One reason also Republicans are supporting this, look at this letter. This is from an environmental — the Evangelical Environmental Network. Judy, 65,000 people who describe themselves as pro-life or anti-abortion Christians signed this letter urging Congress to pass this bill and other environmental bills. Essentially, Judy, there is some fervor on the right from religious groups to say, the environment is a life issue. And that is something that we’re seeing senators listen to. Also, there are some at-risk senators, Cory Gardner in Colorado, also Steve Daines in Montana, for whom this bill will help. And there is more environmental legislation coming up the pike. We will keep an eye on it...”

Covid-19 is Bad. But It May Not Be the “Big One”. Really? This is big enough, thank you very much. A post at WIRED.com (paywall), feature Minnesota epidemiologist Michael Osterholm, caught my eye – here’s an excerpt: “…That expectation is leading modelers and planners to a difficult realization. Not only will the US need a high-level effort to figure out what went wrong in its response to the novel coronavirus, it needs to start soon, and not wait for whenever the end of this pandemic might be. Looking back at his 15-year-old prediction, Osterholm said last week that it’s critical to begin the accounting now. “We have to take the information that we get from this pandemic—all aspects of it—and ask ourselves, much like the National Transportation Safety Board takes the black box from a crashed airplane: What can we do to make sure it doesn’t happen again?” he says. “And part of this needs to occur throughout the duration of this, because we’ll need to pivot quickly based on whatever is going on...”

“Major Vulnerability”. EV Hacks Could Threaten Power Grid. Here’s an excerpt from E&E News: “The spread of electric vehicles is melding parts of the U.S. power and transportation sectors — and posing a unique problem for grid cybersecurity, experts warn. The two industries are connected by powerful chargers, known as electric vehicle supply equipment (EVSE), that could offer ways for hackers to disrupt the grid. “You do reach a tipping point where you’ve got so much load on the grid provided by these chargers, that if you could control it and manipulate them in aggregate, you would start to see power system problems,” said Jay Johnson, principal manager of technical staff at Sandia National Laboratories. Johnson and his team at Sandia are exploring ways to prevent such a grid attack, which would take a difficult and coordinated effort to pull off...”

June 23, 2002: Just a few weeks after torrential rains hit the area, another round of heavy rain hits northern Minnesota. This time up to eight inches would fall in a two-day period in parts of Mahnomen and St. Louis Counties. 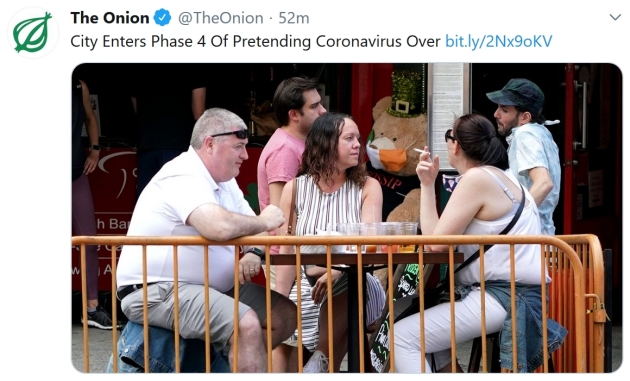 Cumulus congestus above courtesy of (my buddy) Keith Eichner.

Rising Seas Threaten an American Institution: The 30-Year Mortgage. Here’s a clip from The New York Times (paywall): “…If climate change makes coastal homes uninsurable, Dr. Becketti wrote, their value could fall to nothing, and unlike the 2008 financial crisis, “homeowners will have no expectation that the values of their homes will ever recover.” In 30 years from now, if global-warming emissions follow their current trajectory, almost half a million existing homes will be on land that floods at least once a year, according to data from Climate Central, a research organization. Those homes are valued at $241 billion. Currently, new research shows banks rapidly shifting mortgages with flood risk off their books and over to organizations like Fannie Mae and Freddie Mac, government-sponsored entities whose debts are backed by taxpayers…”

Climate Change Exposes Future Generations to Life-Long Health Harm. Reuters reports: “A child born today faces multiple and life-long health harms from climate change – growing up in a warmer world with risks of food shortages, infectious diseases, floods and extreme heat, a major global study has found. Climate change is already harming people’s health by increasing the number of extreme weather events and exacerbating air pollution, according to the study published in The Lancet medical journal. And if nothing is done to mitigate it, its impacts could burden an entire generation with disease and illness throughout their lives. “Children are particularly vulnerable to the health risks of a changing climate...”

Oil and Gas Companies Might Never Recover from Covid-19. Quartz has the story: “…The impact on oil companies, from the biggest supermajors to independents like Cooper, was swift and devastating. In a matter of weeks, the world’s most valuable commodity had become practically impossible to sell. At least 500 drilling rigs in the US have been shut down, pushing the nation’s total to its lowest level on record. Most of the global majors posted Q1 earnings far below 2019 levels; some have plans to cut thousands of employees. Several smaller companies have already filed for bankruptcy; analysts project hundreds more could follow over the next year even if prices rebound somewhat. Texas shed a record 26,300 oil and gas jobs in April alone, and could lose up to 100,000—one-third of its workforce in the industry—by the end of the year…” 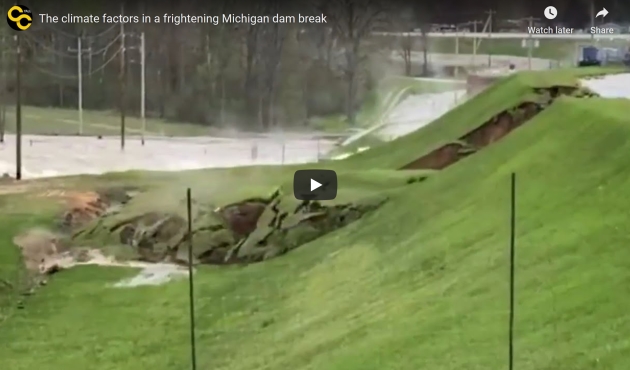 Michigan Dam Break Shows How Climate Change Strains Infrastructure. Yale Climate Connections explains: “…The combination of more frequent and more severe extreme events with aging infrastructure vulnerable to damages from climate change amounts to that “double whammy” … and leads to double jeopardy. “You take, say, a 150-year event, and it suddenly becomes a 50-year event, and that’s sort of what’s happening in many places,” says MIT scientist Kerry Emanuel in this month’s “This is Not Cool” original video by Midland resident Peter Sinclair. Scientist Jennifer Francis of Woods Hole Oceanographic Institution points to the atmosphere’s now holding 7% more moisture than it did just five decades ago. That water vapor, or moisture, one result of a warming climate, amounts to latent energy, she says. “So when it does rain, it rains harder.” She points to a “big uptick” in heavy precipitation events in the eastern half of the U.S. “very directly related to climate change...”

High Siberian Temperatures Alarm Scientists: Links and headlines via Climate Nexus: “In Siberia, high temperatures, following an extraordinarily warm winter, are “alarming” and symptomatic of human-caused climate change, scientists say. Russian towns in the Arctic circle, which usually have daytime temperatures around 0°C (32°F) at this time of year with a previous record of 12°C (54°F), hit an astounding 30°C (86°F) on June 9th. Average winter temperatures in Siberia were roughly 6°C (10°F) above average, higher than any year since records began 130 years ago, likely contributing to the permafrost melt partly to blame for a disastrous diesel fuel spill. Warm winter temperatures also led to swarms of Siberian silk moths, whose larvae eat the region’s conifer trees, and zombie fires across the region that smoldered under winter snows and have reignited as temperatures rose. “It is undoubtedly an alarming sign, but not only May was unusually warm in Siberia. The whole of winter and spring had repeated periods of higher-than-average surface air temperatures.” Freja Vamborg, a senior scientist at C3S, told the Guardian.” (The Guardian, Mashable; Climate Signals background: Extreme Heat and Heat Waves)

IEA Outlines $3 Trillion Green Recovery Plan to Help Fix Economy. If we’re rebuilding and focusing on infrastructure, a cleaner, more sustainable path forward makes sense. Here’s an excerpt from CNBC.com: “The International Energy Agency has laid out a $3 trillion green recovery plan, offering governments around the world a “once-in-a-lifetime” roadmap to sustainably rebuild their economies in the wake of the coronavirus pandemic. The Sustainable Recovery report, published Thursday, is designed to present world leaders with cost-effective measures that could be implemented from 2021 through to 2023. It sets out three main goals: spurring economic growth, creating jobs and building more resilient and cleaner energy systems…”