No Way To Predict Individual Thunderstorms

“Paul, what time will it rain at my house? Please be specific.” Timing precipitation from late fall into spring is a bit easier with clearly defined storms and frontal passages.

But summer hit-or miss-thunderstorms are a different beast altogether. We can predict when the atmosphere will be ripe for storms, but trying to quantify when and where a 10-mile diameter storm will mushroom to life is an exercise in futility. Good luck with that. Doppler radar can give a 30-90 minute heads-up. But models? Not possible yet.

It’s official: 80s now constitute a “cool front”. Random T-storms freckle Doppler radar today into Thursday; 90s on Wednesday give way to slightly cooler, less humid weather by the weekend, with highs in the mid-80s. Enjoy the brief respite because models another run of 90s next week. 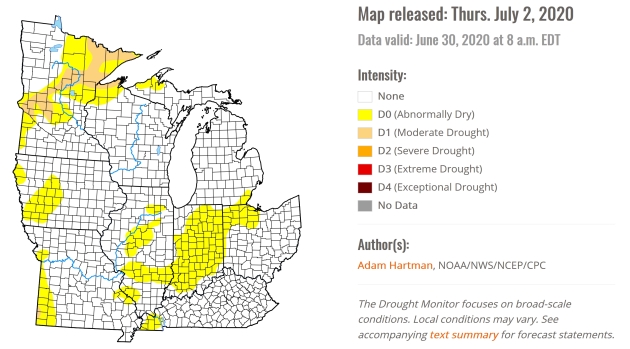 Pockets of Moderate Drought. You may have seen downpours in recent days, but much of Minnesota is considerably drier than average, an omen of what may be to come in August if this pattern continues. Map: U.S. Drought Monitor.

10 Essential Facts About Heat and Your Health. A post at Everyday Health has some useful information on who is most at risk of heat-related ailments: “…Others at higher risk for heat-related illness include those who are morbidly obese, the elderly, and people who are immobile, Buete says. People with diabetes can be heat sensitive, too, says Matthew Corcoran, MD, of APG Endocrinology in Egg Harbor, New Jersey. “If you have diabetes and you become dehydrated from the heat, it can affect your blood-sugar levels,” says Dr. Corcoran. Be sure to keep insulin and other diabetes medications out of the heat, as hot temperatures can ruin them, he adds. People with multiple sclerosis may also find that their symptoms worsen when they’re hot. When heat raises a person’s body temperature, it becomes harder for the central nervous system to work properly...” 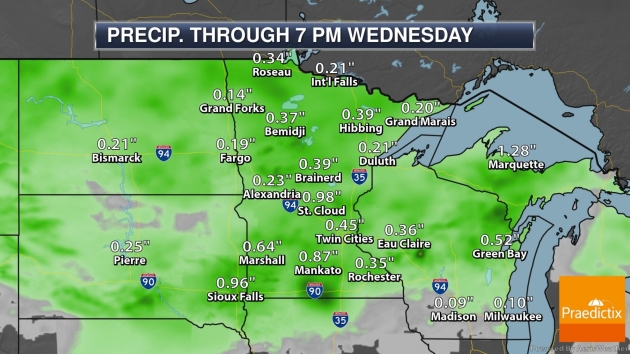 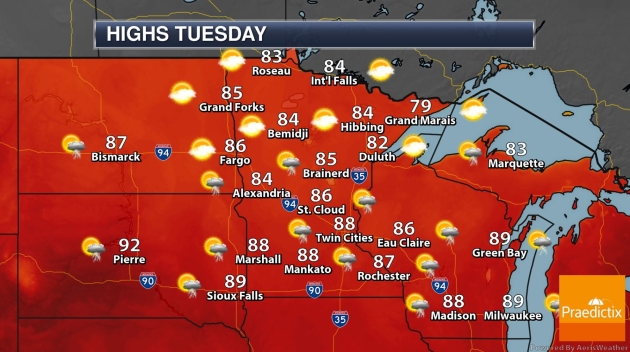 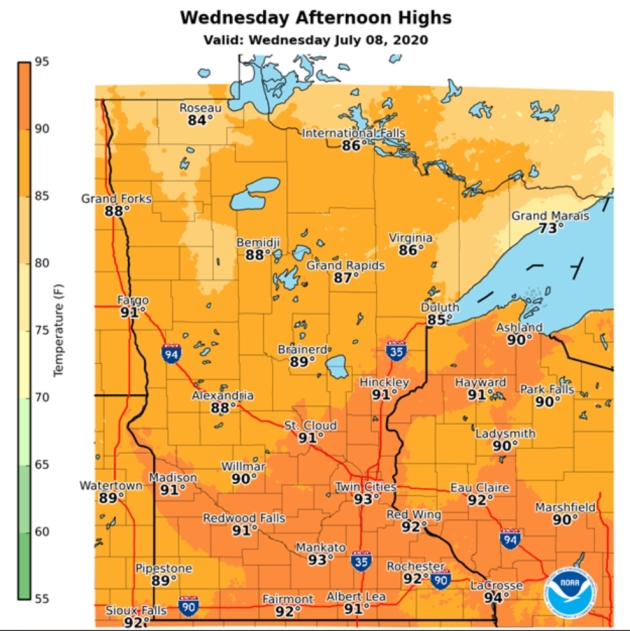 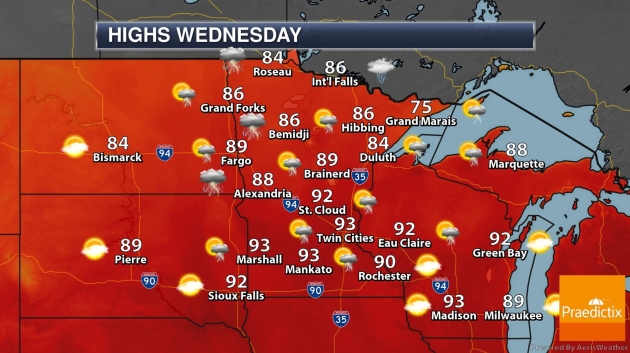 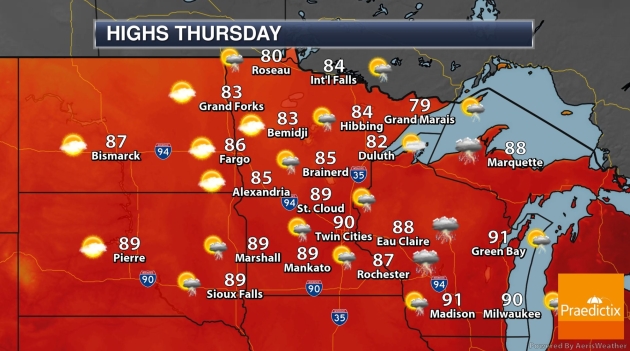 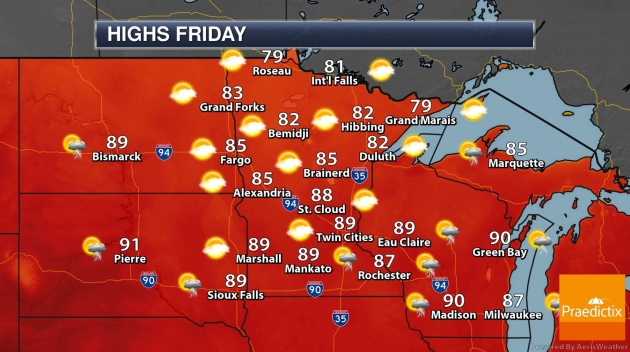 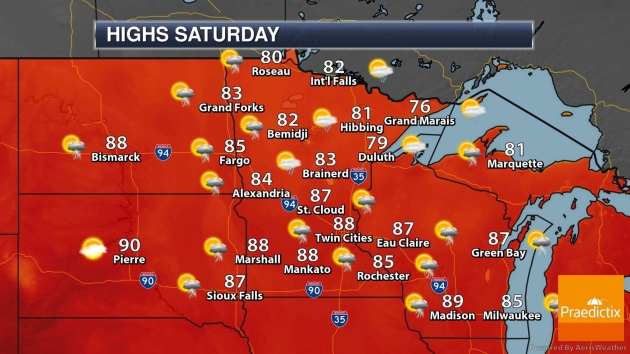 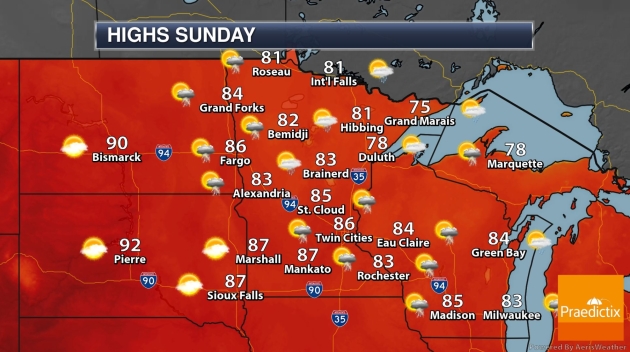 8-14 Day Temperature Trends. NOAA CPC predicts significantly warmer than average temperatures for most of the USA between July 13 and 19. Seems consistent with the current pattern. 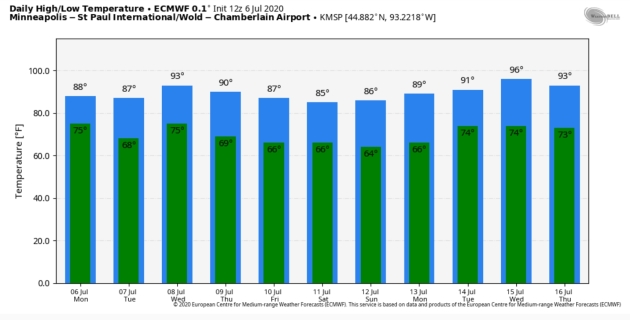 57 Shades of Ouch. Once again I think GFS is too hot, and ECMWF is a few degrees too cool. The truth may lie somewhere inbetween the 2 solutions. But yes, in spite of a more comfortable weekend temperatures trend above average into the third week of July. Meteograms: WeatherBell. 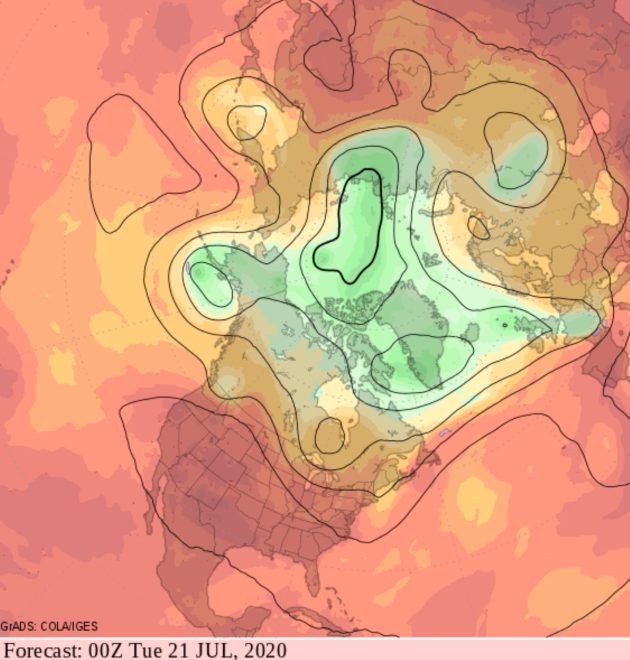 Faint Puffs of Relief. While most of America bakes Minnesota is forecast to see occasional cool fronts, capable of dropping temperatures into the 80s by the third week of July, if the latest GFS guidance is to be believed. 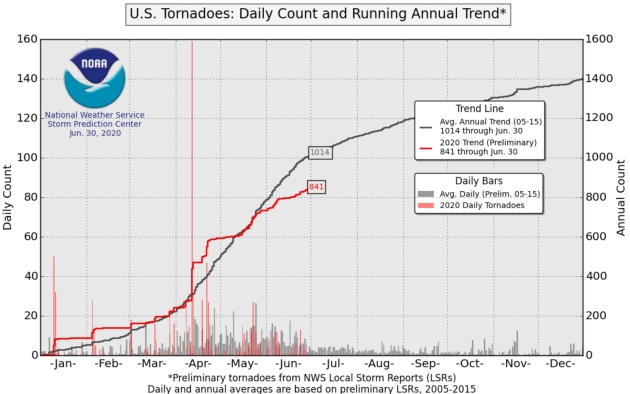 Tornado Alley Just Had One of Its Slowest Seasons Ever. What is going on? CNN.com has an update: “After a deadly start to the tornado season in the South, May and June were unusually quiet across the Plains, with near record lows for tornadoes, giving residents of Tornado Alley a rare reprieve. Usually, central US states are hit by an onslaught of tornadoes in late spring, but this year that failed to materialize. Nationally, May saw 140 tornadoes, well below the average of 276, and the fewest in 50 years. And the month’s two strong tornadoes, EF2 or greater, were also the fewest in recorded history. In fact, this year there were more tornadoes in two days in April than in all of May. On Easter Sunday and the early hours of that Monday, 190 tornadoes, including 16 rated EF3 or higher, tore through 10 states, killing 36 people…”

Protecting Your Home From Lightning. Neighbors gave me a hard time for putting up lightning rods on our last home, but after a few near-misses I look back and believe it was money well spent. Here’s more info from NOAA: “Lightning rods (and the accompanying protection system) are designed to protect a house or building from a direct lightning strike and, in particular, a lightning-initiated fire. Note that lightning protection systems do not prevent lightning from striking the structure, but rather intercept a lightning strike, provide a conductive path for the harmful electrical discharge to follow (the appropriate UL-listed copper or aluminum cable), and disperse the energy safely into the ground (grounding network). It’s very important that these components be properly connected (bonded) to minimize the chances for any sparks or side flashes. While lightning rods help protect a structure from a direct lightning strike, a complete lightning protection system is needed to help prevent harmful electrical surges and possible fires caused by lightning entering a structure via wires and pipes. A complete system also includes electrical surge protection devices for incoming power, data, and communication lines; and surge protection devices for vulnerable appliances. Lightning protection may also be needed for gas piping…”

61,000+ Clean Energy Jobs. Here’s an excerpt of a post at Clean Energy Economy Minnesota: “In 2019, clean energy employed 61,800 Minnesotans. COVID-19 has dramatically shifted this number, with the latest numbers showing over 11,000 jobs lost in the clean energy sector. Unfortunately, these job losses have erased several years of industry gains. Despite this, the clean energy industry continues to serve our communities, care for employees, and innovate new solutions to address the crisis. Minnesota’s clean energy industry will play a vital role in our state’s economic recovery because of its size, reach and potential for growth. Restoring and increasing jobs in this industry is a proven way to boost the economy and will be critical as policymakers work to get Minnesotans on their feet again...”

There is Too Much News. Well, yeah. Columbia Journalism Review has a timely post: “…The basic rhythms of the news cycle don’t help us. Each day’s news must fill the same amount of column space, the same number of cable-news hours, the same length of radio news bulletin. Usually, the most important of that news is hyped in all-caps headlines, blaring chyrons, and “BREAKING NEWS” jingles—this exerts a flattening effect, making it harder, over a long period of time, to distinguish actual news from attention hustling. At times like this one, when almost everything in the news is actually important, it’s especially difficult to maintain a well-calibrated sense of proportion. Sure, we have some crude metrics for the bigness of news...”

How Scientists Know Covid-19 is Way Deadlier Than the Flu. A story at National Geographic got my attention: “…Using the handful of studies that have calculated infection-fatality rates for seasonal flu, Meyerowitz-Katz determined that somewhere between 1 and 10 people die for every 100,000 that are infected. For COVID-19, that number ranges between 500 and 1,000 deaths per 100,000 infections. By his calculations, the coronavirus is likely to be 50 to 100 times more deadly than the seasonal flu, which supports the Columbia University findings…” 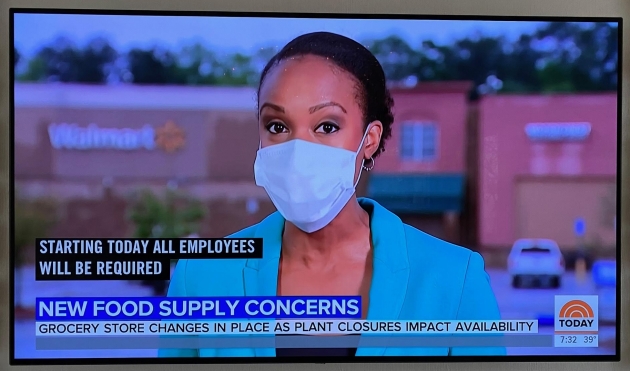 No, Your Coronavirus Face Mask Does Not Limit Oxygen Intake. Mental Floss dispels some of the myths floating around out there: “…While some CO2 can be inhaled, it’s not in quantities that could pose a threat to healthy mask users. The amount is easily eliminated by a person’s respiratory and metabolic systems. If a mask is worn for a prolonged period, it might be possible to develop a headache, but nothing more. “There is no risk of hypercapnia in healthy adults who use face coverings, including medical and cloth face masks, as well as N95s,” Robert Glatter, an emergency room physician at Lenox Hill Hospital in New York, told Healthline. “Carbon dioxide molecules freely diffuse through the masks, allowing normal gas exchange while breathing...”

Dr. Elon and Mr. Musk: Inside Tesla’s Production Hell. WIRED.com (paywall) has a fascinating and vaguely horrifying tale: “…If it has been strange to watch Musk’s wild ride via news reports and social media, it’s been even weirder inside the company. Over the past six months I’ve communicated with dozens of current and former Tesla employees, from nearly every division. They describe a thrilling and tumultuous workplace, where talented engineers and designers have done some of their proudest work but where, as one former executive put it, “everyone in Tesla is in an abusive relationship with Elon.” Almost all these employees spoke on the condition of anonymity because of nondisclosure agreements or fears of being sued or fired by Musk. (Even those with positive things to say asked for anonymity…)”

July 7, 2000: Torrential rains douse the southern Twin Cities metro area with 8 inches in a three to five hour span in northern Dakota county. Eagan receives the most damage; many homes were flooded. 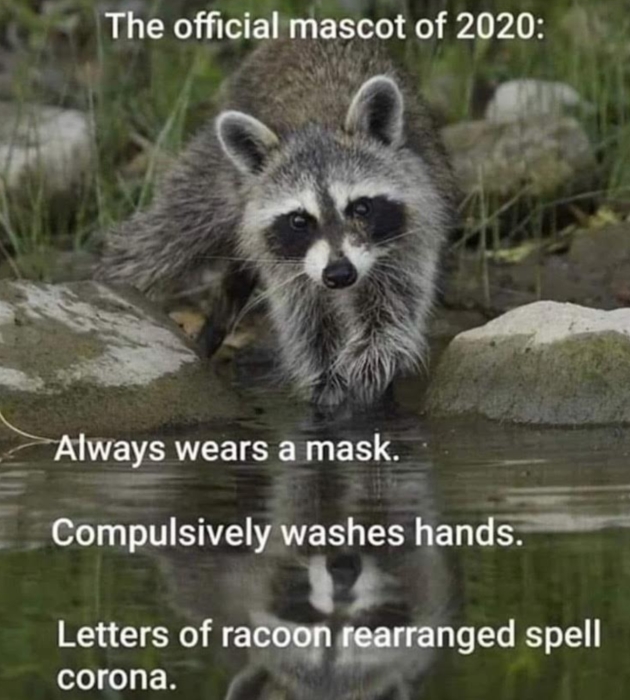 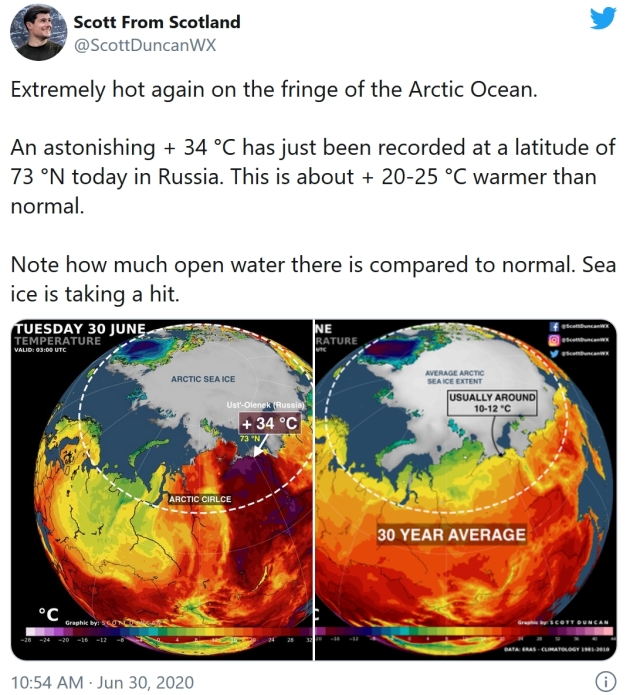 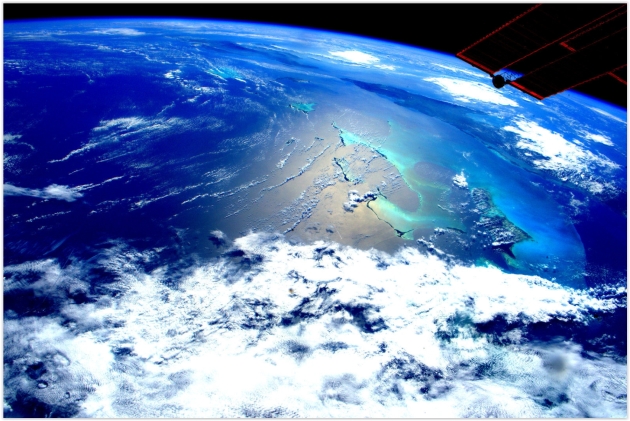 Biden’s Big Climate Decision: Will He Embrace His Task Force’s Goals? The New York Times reports; here’s a clip: “…Still, Ms. Ocasio-Cortez, who has previously clashed with Mr. Biden over his approach to combating climate change, struck a note of caution. “Now, what he does with those recommendations, ultimately, is up to him,” she said. “And we will see what that commitment looks like.” Those goals, according to three people familiar with the task force’s decisions, include committing to seeing the United States’ electricity sector powered fully by renewable energy by 2035 and a rapid transition to energy-efficient buildings. They also seek a Day 1 promise to begin developing new vehicle efficiency standards — and to include labor unions in the discussions — to replace and improve upon the Obama administration measures that President Trump has weakened...”

As Sea Levels Rise, Will Drinking Water Supplies Be at Risk? Yale E360 has the story; here’s an excerpt: “…Concern about the Delaware River’s salt front is mirrored in other coastal areas, such as the Savannah River between Georgia and South Carolina, where an advancing salt front is threatening drinking water intakes as well as freshwater wetlands. Researchers from the University of South Carolina modeled the effects of 1 foot and 2 feet of sea level rise on salt concentrations over about 40 miles of the river’s estuary, starting at the city of Savannah, and found that those sea level increases would threaten drinking water intakes as well as natural systems…”

Climate Change Should Be Fully Integrated In All Subject Areas and Grade Levels. Here’s an Op-Ed (that I happen to agree with) featured at MinnPost: “There is overwhelming support from teachers, parents, and youth for incorporating climate change in K-12 education, as seen in recent surveys. Yet state education standards continue to lag behind. In June, New Jersey became the first state to fully integrate climate change education in all subject areas and grade levels — a major accomplishment and only the beginning of climate change education’s journey into the public school system nationwide. Education standards are developed at the state level, with specific curricula and lesson plans developed at the district and teacher level. When we look at the nation as a whole, climate change education is a patchwork across states and counties — with full integration in some areas and partial or no integration in others...”

Northern Great Plains “Greening” During Recent Climate Change. NASA data confirms spring is coming a few weeks earlier, autumn warmth lingering a few extra weeks into October and November, based on greening of vegetation. Here’s an excerpt of a press release from Idaho State University: “Increased carbon dioxide in the atmosphere is causing a “greening” in northern latitudes and more carbon dioxide is being absorbed by plants there, according to a new study co-authored by Idaho State University researcher Bruce Finney, that includes the Northern Great Plains of the United States. “Greening” in this sense means higher plant productivity on the large swaths of grasslands studied, including the plains of Montana. Increased amounts of carbon in the atmosphere due to the burning of fossil fuels allowed higher plant photosynthesis while using water more efficiently…”