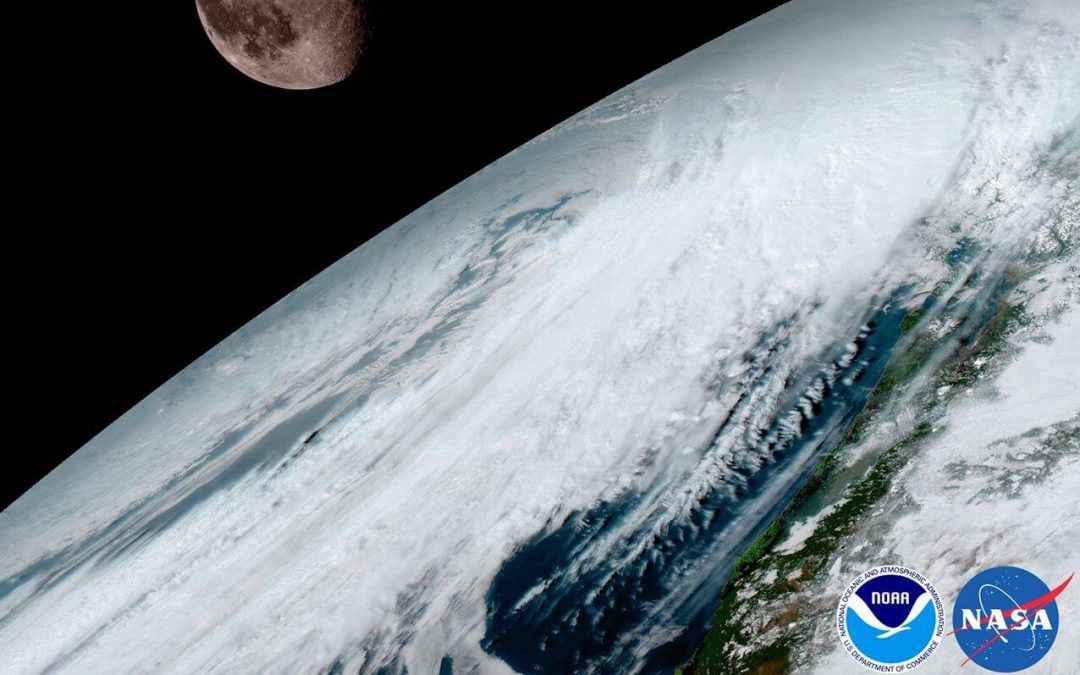 GOES-16, launched in November 2016, is the first of the National Oceanic and Atmospheric Administration’s (NOAA) next generation of geostationary weather satellites.

With the new age of weather satellites upon us let’s take a look back at the top six GOES -16 satellite images of 2017.

NOAA’s GOES-16 provides imagery with detail and clarity like never seen before. GOES-16’s delivers resolution four times higher than previous NOAA satellites and rapidly scans Earth every 30 seconds to allow forecasters the ability to monitor almost continuously the development of each thunderstorm. This increases thunderstorm and tornado warning lead time. The video above shows the early stages of thunderstorm development on March 6, 2017 over eastern Nebraska. The first tornado was spawned by dusk near Harcourt, Iowa. This line of thunderstorms would continue to be severe through the night and go on to produce at least 36 tornadoes.

Dust storms pose a threat to life and property. One of the greatest impacts being to transportation. On June 20, 2017 six people were killed when a dust storm resulted in a 25-car pileup along the New Mexico and Arizona border. March 23-24, 2017 GOES-16 was able to pick up blowing dust particles as strong winds developed across a large portion of central Texas. Also, better detection of wildfire smoke particles and other pollutants improves air quality warnings.

NEW #GOES16 (now #GOESEast) tech – Geostationary #Lightning Mapper (GLM) data will soon provide real-time view of convective weather to aviation forecasters – check out this imagery showing how flights (red dots) are safely routed around (or through!) a weather system. #TheFutureIsBrightThis time-lapse movie of GLM lightning data covers the afternoon and evening of November 5th, 2017, when a large complex of thunderstorms spanned across Illinois, Indiana and Ohio. This GLM movie is rendered at 500x real time and overlaid with aircraft flight tracks as broadcast over the ADS-B system, displayed as one red dot for each aircraft. The flight tracks were filtered to only show aircraft flying higher than 5000 feet and faster than 150 knots. The animation shows how air traffic interacts with convective weather, with flights routed around the system or through gaps within the system to reach their destination. While this animation was created in hindsight using archived flight tracks, GLM data will soon provide a real-time view of convective weather to aviation forecasters, enabling safer and more efficient flight routing decisions across the entire hemisphere, including remote regions with sparse or no weather radar coverage.Credit for ADS-B historical data goes to ADSBexchange, http://www.ADSBexchange.comCredit: Lockheed Martin

The Geostationary Lightning Mapper (GLM) is a new instrument on board the GOES-16 satellite providing never before seen lightning data to forecasters. By continuously looking for lightning flashes, the GLM has greatly improved detection and prediction of lightning which, in turn, will help alert the public of dangerous weather. The new lightning mapper detects in-cloud lightning which tends to occur 10 minutes before potentially deadly cloud-to-ground lightning strikes.

The imagery above shows how airplane traffic (red dots) is safely routed around a large complex of thunderstorms spanning Illinois, Indiana and Ohio on November 5th, 2017. With the GLM forecasters can detect when a thunderstorm is forming and strengthening. A rapid increase in lightning is often a sign of an intensifying thunderstorm. Accurate detection of lightning over the open ocean also provides safer navigation by flight and by sea.

During heavy rain events, the GLM is able to show when thunderstorms stall. This data in combination with radar help forecasters spot severe weather and a flood threat early and can issue public warnings sooner.

Dust off Coast of Africa

On January 15 2017 the Saharan Dust Layer can be seen in the far right edge of the image above. This dry, dusty air from the coast of Africa can have impacts on tropical cyclone development in the Atlantic Ocean. GOES-16 is able to observe this dusty air with its 16 spectral channels enabling forecasters to study hurricane formation and intensification as storms approach North America. These additional channels help to differentiate between clouds, dust, or snow.

GOES-16 satellite proved critical in forecasting Hurricane Maria as it neared Puerto Rico on September 20, 2017. The National Hurricane Center reported that Maria’s maximum sustained winds were near 150 mph with higher gusts, and that hurricane-force winds extended outward up to 60 miles from the hurricane’s center. As NOAA describes:

Radar in San Juan went out at 5:50 a.m. EDT, just before Maria made landfall on the island. Land-based radar is used during storms to provide detailed information on hurricane wind fields, rain intensity, and storm position and movement.  With this critical technology disabled and a major hurricane approaching, forecasters were able to utilize data from NOAA’s latest geostationary satellite, GOES-16, to track the storm in real-time. GOES-16 is able to scan a targeted area of severe weather as often as every 30 seconds, a capability not available with current GOES. This rapid scanning rate is allowing forecasters to analyze cloud patterns and track Maria in real time. GOES-16 also has three times more channels than the current GOES imager, providing better estimates of the structure of tropical cyclones and their environments. The four-fold improvement in resolution from GOES-16 provides greater accuracy of feature attributes, allowing for better characterization of the eyes of hurricanes.

In spring 2018 the next satellite in the series, GOES-S, is scheduled to launch from Cape Canaveral Air Force Station in Florida. Once the satellites reaches geostationary orbit, approximately two weeks after launch, it will be designated GOES-17. Once operational GOES-17 will be placed in the GOES West location giving the U.S. two advanced geostationary weather satellites to watch over the Western Hemisphere, from the west coast of Africa to Guam. Of the remaining satellites in the series, GOES-T will launch in 2020 and GOES-U in 2024. Indeed, an exciting time to be a meteorologist!