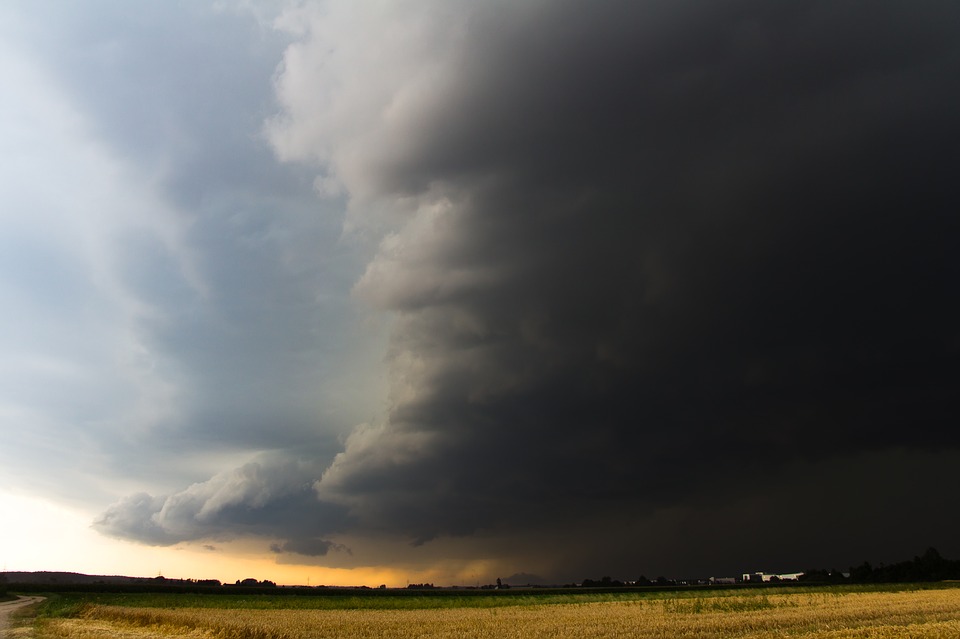 Nice to see that stubborn, slow moving, large upper level low moving east of the Great Lakes Region through the end of the week. Weather conditions will slowly improve for folks in the northeast quadrant of the nation, but another storm sytem will quickly develop behind it and move into the middle part of the country through the 2nd half of the week. Widespread showers and storms will be possible with mountain snow, strong/severe storms in the Plains and pockets of heavy rain.

…SUMMARY… ISOLATED TO SCATTERED THUNDERSTORMS…WITH SOME PRODUCING LARGE HAIL AND WIND DAMAGE…WILL BE POSSIBLE THURSDAY ACROSS MUCH OF TEXAS…SOUTHERN OKLAHOMA AND LOUISIANA. MARGINALLY SEVERE STORMS WITH HAIL AND STRONG WIND GUSTS MAY OCCUR IN PARTS OF THE CENTRAL GULF COAST…WEST-CENTRAL TEXAS AND CENTRAL OKLAHOMA. THUNDERSTORMS MAY ALSO DEVELOP ACROSS PARTS OF THE OZARKS…CENTRAL PLAINS…CENTRAL ROCKIES…INTERMOUNTAIN WEST…DESERT SOUTHWEST AND SIERRA NEVADA. …SRN PLAINS AND LA… AN UPPER-LEVEL RIDGE IS FORECAST TO MOVE EWD ACROSS THE SRN AND CNTRL PLAINS ON THURSDAY OVER THE TOP OF A WARM SECTOR LOCATED ACROSS THE ERN HALF OF TX INTO LA. SFC DEWPOINTS ARE FORECAST TO BE IN THE LOWER 70S F IN CNTRL AND EAST TX RESULTING IN STRONG INSTABILITY. IN SPITE OF THIS…SUBSIDENCE DUE TO THE UPPER-LEVEL RIDGE WILL HELP TO KEEP CONVECTIVE INITIATION ISOLATED THURSDAY AFTERNOON AND CONCENTRATED ALONG BOUNDARIES. AS LOW-LEVEL CONVERGENCE INCREASES ON THE MESOSCALE…A FEW CONVECTIVE CLUSTERS COULD DEVELOP BY EARLY THURSDAY EVENING AND PERSIST INTO THE OVERNIGHT PERIOD. THE MOST FAVORABLE AREA FOR CONVECTIVE INITIATION WOULD BE ON THE WRN EDGE OF THE MOIST SECTOR ALONG THE I-35 CORRIDOR AND NEAR A WARM FRONT EXTENDING SEWD ACROSS ARKLATEX. NAM FORECAST SOUNDINGS FOR WACO AND DALLAS AT 00Z/FRI SHOW IMPRESSIVE THERMODYNAMICS WITH MLCAPE OF 3500 TO 4500 J/KG AND STEEP LAPSE RATES NEAR 7.5 C/KM FROM 850 TO 500 MB. IN ADDITION…VEERING WINDS WITH HEIGHT BELOW 700 MB AND WLY FLOW ALOFT WILL CREATE STRONG DEEP-LAYER SHEAR ACROSS MUCH OF THE WARM SECTOR. THIS SHOULD SUPPORT SUPERCELLS AND LARGE HAIL IN AREAS WHERE STORMS CAN INITIATE. WIND DAMAGE COULD ALSO OCCUR WITH CLUSTERS THAT CAN ORGANIZE DURING THE EARLY EVENING. A TORNADO OR TWO CAN NOT BE RULED OUT WITH SUPERCELLS THAT CAN BECOME DOMINANT. FURTHER TO THE EAST ACROSS LA…THUNDERSTORMS COULD ALSO DEVELOP IN A MODERATELY UNSTABLE AND STRONGLY SHEARED ENVIRONMENT. ALTHOUGH LAPSE RATES ARE NOT AS STEEP AS ACROSS TX…ANY CONVECTIVE CLUSTER THAT CAN ORGANIZE COULD DEVELOP A WIND-DAMAGE THREAT DURING THE LATE AFTERNOON AND EARLY EVENING. 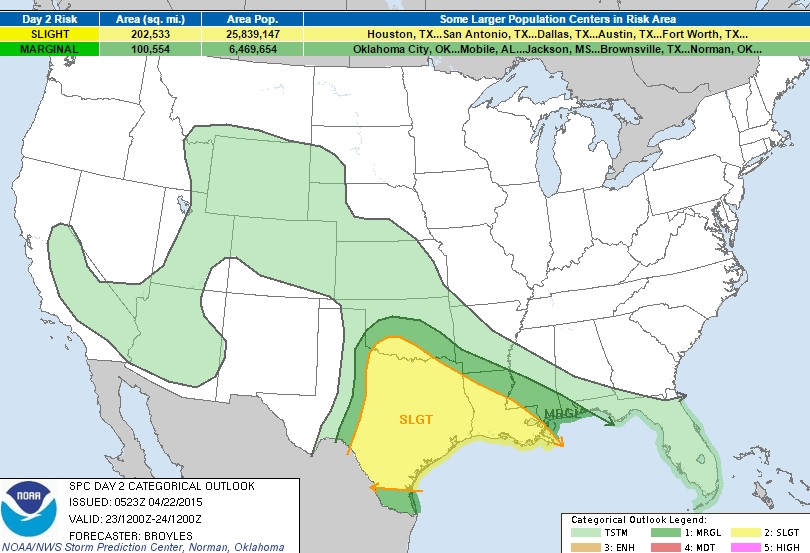 …SUMMARY… SEVERE THUNDERSTORMS WITH LARGE HAIL…WIND DAMAGE AND SOME TORNADOES WILL BE POSSIBLE ACROSS ACROSS THE CENTRAL PLAINS SOUTHWARD INTO THE SOUTHERN PLAINS AND EASTWARD INTO THE LOWER MISSISSIPPI VALLEY. THUNDERSTORMS MAY ALSO DEVELOP ACROSS PARTS OF THE CENTRAL GULF COAST…CENTRAL HIGH PLAINS AND INTERMOUNTAIN WEST. …CNTRL PLAINS… AN UPPER-LEVEL TROUGH IS FORECAST TO MOVE EWD INTO THE CENTRAL PLAINS ON FRIDAY AS A SFC LOW DEEPENS ACROSS THE CNTRL HIGH PLAINS. BACKED SELY WINDS AT THE SFC WILL ALLOW LOW-LEVEL MOISTURE TO GRADUALLY INCREASE ACROSS THE CNTRL PLAINS DURING THE DAY WITH THE MOISTURE AND INSTABILITY AXIS SETTING UP ACROSS SCNTRL AND NRN KS. SFC DEWPOINTS ARE FORECAST TO BE AROUND 60 F ALONG THIS CORRIDOR WITH MODERATE INSTABILITY DEVELOPING BY AFTERNOON. MODEL FORECASTS SUGGEST THAT THUNDERSTORMS COULD INITIATE ALONG THE WEST EDGE OF THE INSTABILITY AXIS IN THE MID TO LATE AFTERNOON WITH A COMPLEX OF STORMS MOVING EWD ACROSS CNTRL AND ERN KS DURING THE LATE AFTERNOON AND EARLY EVENING. NAM FORECAST SOUNDINGS AT 00Z/SAT FOR SALINA AND EMPORIA KS SHOW MLCAPE IN THE 2000 TO 2500 J/KG RANGE WITH STEEP LAPSE RATES AND 40 KT OF 0-6 K SHEAR. THIS ENVIRONMENT SHOULD BE FAVORABLE FOR SUPERCELLS WITH LARGE HAIL AND WIND DAMAGE. THE NAM…GFS AND ECMWF SOLUTIONS AGREE THAT A 40 TO 50 KT LOW-LEVEL JET WILL DEVELOP ACROSS SRN AND ERN KS DURING THE EARLY EVENING AS THE LEFT EXIT REGION OF THE MID-LEVEL JET PASSES OVER THE AREA. THIS COULD MAKE CONDITIONS FAVORABLE FOR TORNADOES WITH THE MORE DOMINANT SUPERCELLS. THE SEVERE THREAT INCLUDING A RISK FOR LARGE HAIL AND WIND DAMAGE SHOULD CONTINUE EWD INTO MO DURING THE EVENING AND MAY REACH THE MID MS VALLEY DURING THE OVERNIGHT PERIOD. …SRN PLAINS/ARKLATEX/LOWER MS VALLEY… AN UPPER-LEVEL RIDGE IS FORECAST TO MOVE INTO THE LOWER TO MID MS VALLEY ON FRIDAY. A WARM SECTOR SHOULD BE IN PLACE FROM CNTRL TX EWD TO THE LOWER MS VALLEY WITH A LOW-LEVEL JET FORECAST TO DEVELOP ACROSS EAST TX AND LA DURING THE DAY. LIFT ASSOCIATED WITH THE LOW-LEVEL JET AND LARGE-SCALE ASCENT ASSOCIATED WITH AN APPROACHING UPPER-LEVEL TROUGH MAY SUPPORT SCATTERED TO WIDESPREAD THUNDERSTORM DEVELOPMENT ACROSS THE REGION AS A 60 TO 75 KT MID-LEVEL JET PASSES BY TO THE NORTH. MCS DEVELOPMENT WILL BE POSSIBLE FROM THE ARKLATEX SWD ACROSS EAST TX…LA AND INTO WRN MS. NAM FORECAST SOUNDINGS AT 21Z FRIDAY FOR MONROE LA EWD TO THE MS RIVER SHOW MLCAPE AROUND 1500 J/KG WITH 45 TO 50 KT OF 0-6 KM SHEAR. THIS SHOULD BE FAVORABLE FOR SUPERCELL DEVELOPMENT ALTHOUGH CONVECTION COULD ALSO ORGANIZE INTO LINES AS STORMS CONGEAL DURING THE AFTERNOON. WINDS AT LOW-LEVELS ARE FORECAST TO BE SOMEWHAT VEERED TO THE SSW WITH UNIDIRECTIONAL WIND PROFILES IN PLACE ABOVE 850 MB. THIS SHOULD BE FAVORABLE FOR WIND DAMAGE ESPECIALLY IF A COLD POOL CAN ORGANIZE ACROSS THE REGION FRIDAY AFTERNOON. LARGE HAIL…WIND DAMAGE AND A TORNADO THREAT COULD DEVELOP WITH SUPERCELLS AND THE MORE INTENSE LINE SEGMENTS. 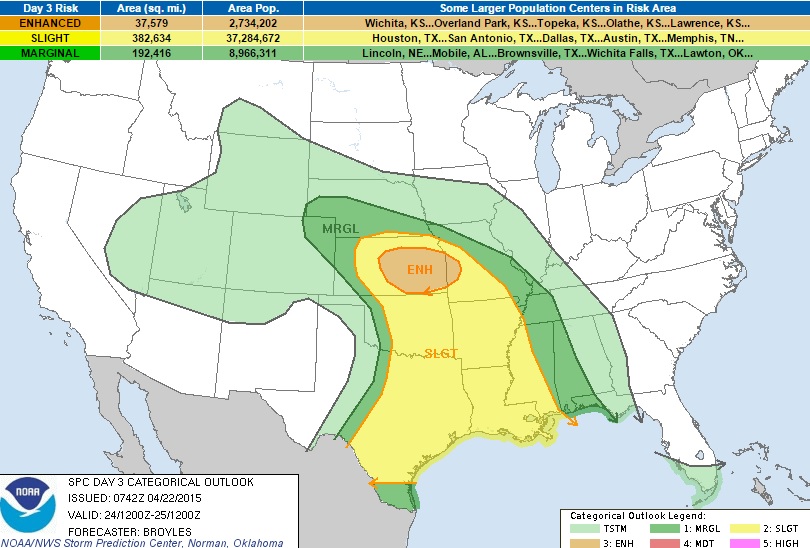 According to NOAA’s HPC, the precipitation outlook through AM Monday suggests pockets of heavy rainfall across the southcentral part of the country as well as area along the Front Range.

As our next storm system moves into the western half of the country over the next few days, snowfall will be possible across the high elevations. There may be pockets of heavier snowfall, but it will be confined to the peaks. Regardless, it is nice to see snow/precipitation in the Western U.S.! 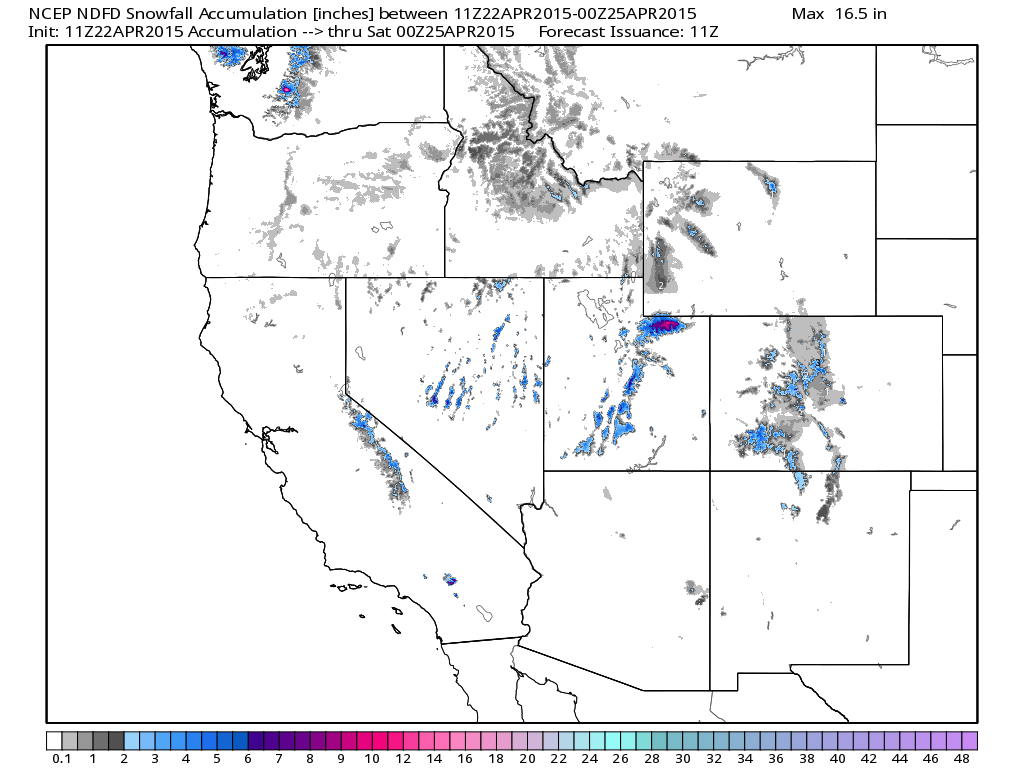 According to NOAA’s HPC, the 8 to 14 day temperature oulook (April 29th – May 5th) suggests cooler than average temperatures continuing across the Eastern U.S., but it is also showing a mild trend across the Western U.S. building into the Central U.S. 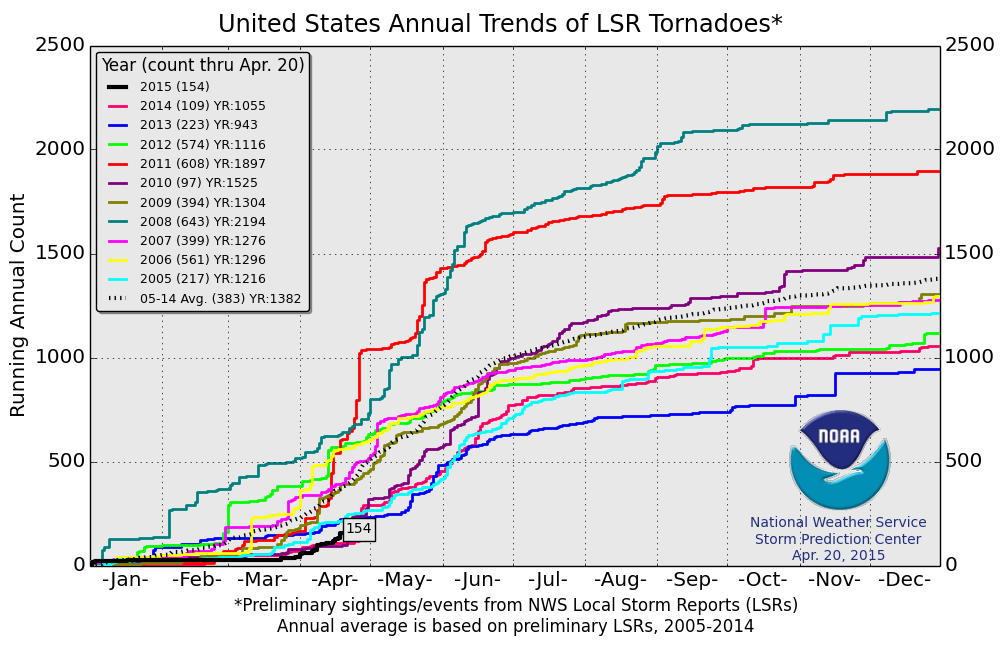 We are nearing the 4th anniversary of the largest/costliest and one of the deadliest tornado outbreaks ever recorded across the U.S., which took place April 25th-28th, 2011.

“The April 25–28, 2011 tornado outbreak was the largest and one of the deadliest tornado outbreaks ever recorded, affecting the Southern, Midwestern, and Northeastern United States and leaving catastrophic destruction in its wake. While the states that were hardest hit were Alabama and Mississippi, the outbreak also produced destructive tornadoes in Arkansas, Georgia, Tennessee and Virginia, and affected many other areas throughout the Southern and Eastern United States. In total, 355 tornadoes were confirmed by the National Weather Service (NWS) and Environment Canada in 21 states from Texas to New York to southernCanada. Widespread and destructive tornadoes occurred on each day of the outbreak, with April 27 being the most active day with a record of 211 tornadoes touching down that day from midnight to midnight CDT (0500 – 0500 UTC). Four of the tornadoes were destructive enough to be rated EF5, which is the highest ranking possible on the Enhanced Fujita scale; typically these tornadoes are only recorded about once each year or less.”

“In total, 348 people were killed as a result of the outbreak, which includes 324 tornado-related deaths across six states. In addition, 24 fatalities were not caused by tornadoes, but were confirmed to be as a result of otherthunderstorm-related events such as straight-line winds, hail, flash flooding or lightning.In Alabama alone, 238 tornado-related deaths were confirmed by the Storm Prediction Center (SPC) and the state’s Emergency Management Agency.”

“April 27 had the most tornado-related fatalities in the United States in a single day since the “Tri-State” outbreak on March 18, 1925, when at least 747 people were killed. Nearly 500 preliminary local storm reports were received for tornadoes over four days, including 292 in 16 states on April 27 alone. This event was the costliest tornado outbreak and one of the costliest natural disasters in United States history (even after adjustments for inflation), with total damages of approximately $11 billion (2011 USD).” 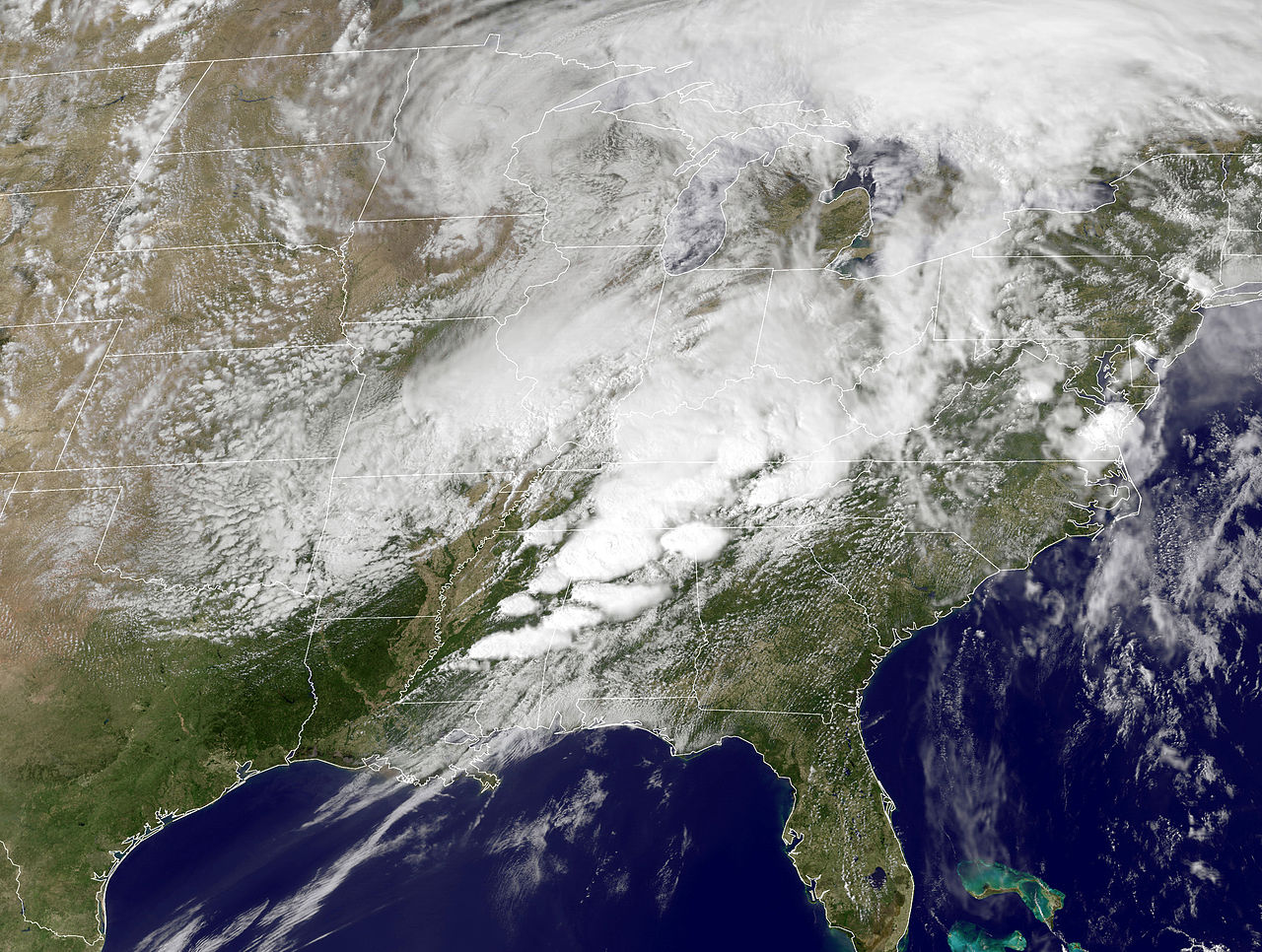 Below Normal 2015 Atlantic Hurricane Season Ahead?

Earlier this month, Colorado State University released it’s 2015 Atlantic Hurricane Season forecast and this is what they are saying.

“FORT COLLINS – Colorado State University researchers are predicting a well below-average hurricane season for the Atlantic basin in 2015, citing the likely development of a moderate to strong El Niño event as well as anomalous cooling of the tropical and sub-tropical Atlantic.”

“The CSU Tropical Meteorology Project team is calling for seven named storms during the Atlantic hurricane season, which runs from June 1 to Nov. 30. Of those, researchers expect three to become hurricanes and one to reach major hurricane strength (Saffir/Simpson category 3-4-5) with sustained winds of 111 miles per hour or greater.”

“The team bases its forecasts on over 60 years of historical data that include Atlantic sea surface temperatures, sea level pressures, vertical wind shear levels (the change in wind direction and speed with height in the atmosphere), El Niño (warming of waters in the central and eastern tropical Pacific), and other factors.”

““The tropical Atlantic has anomalously cooled over the past several months, and the chances of a moderate to strong El Niño event this summer and fall appear to be quite high,” Klotzbach said. “Historical data indicate fewer storms form in these conditions.”” 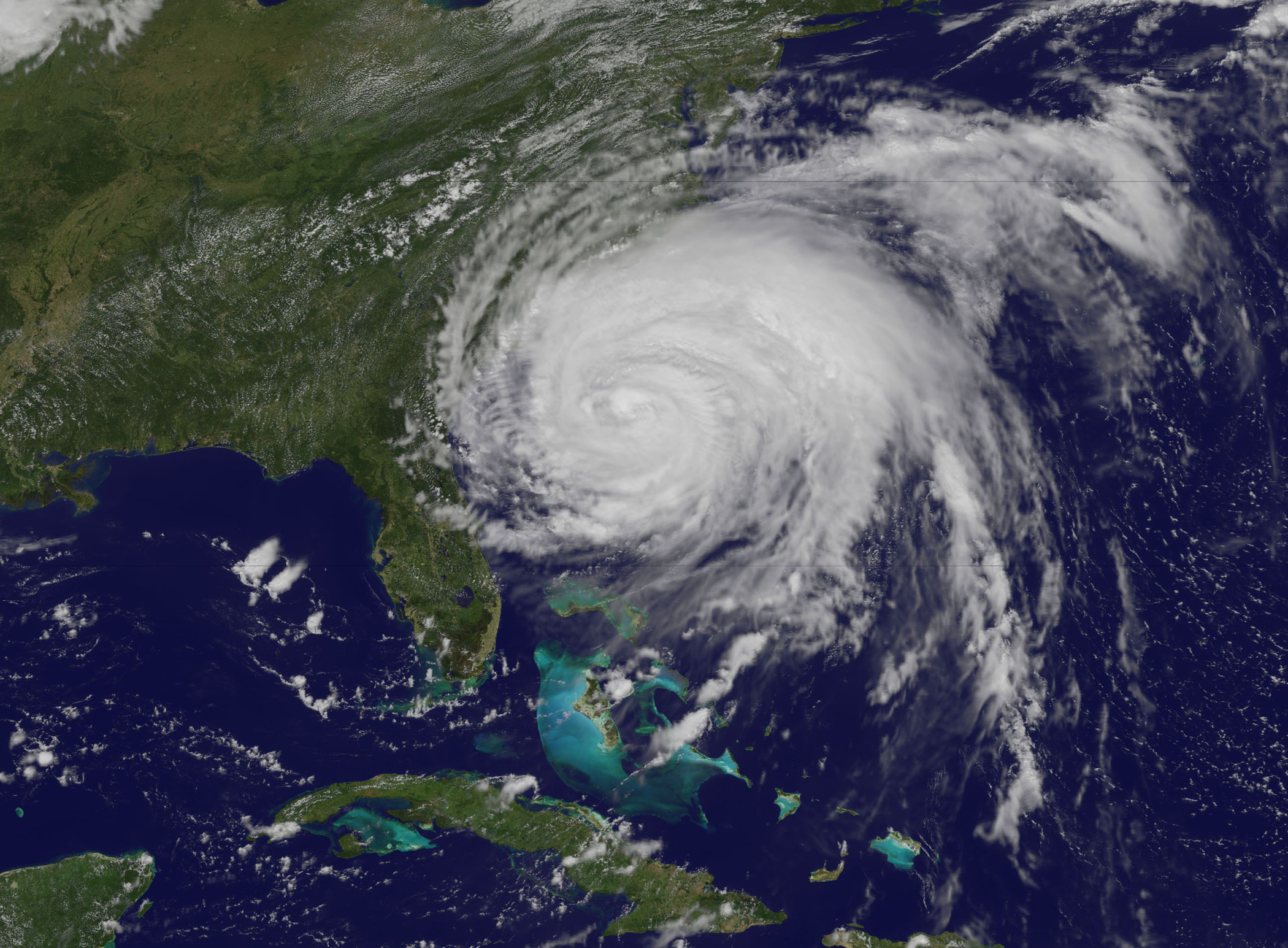