Chillier Air (And Even SNOW) In The Upper Midwest – National Weather Outlook For October 6, 2022 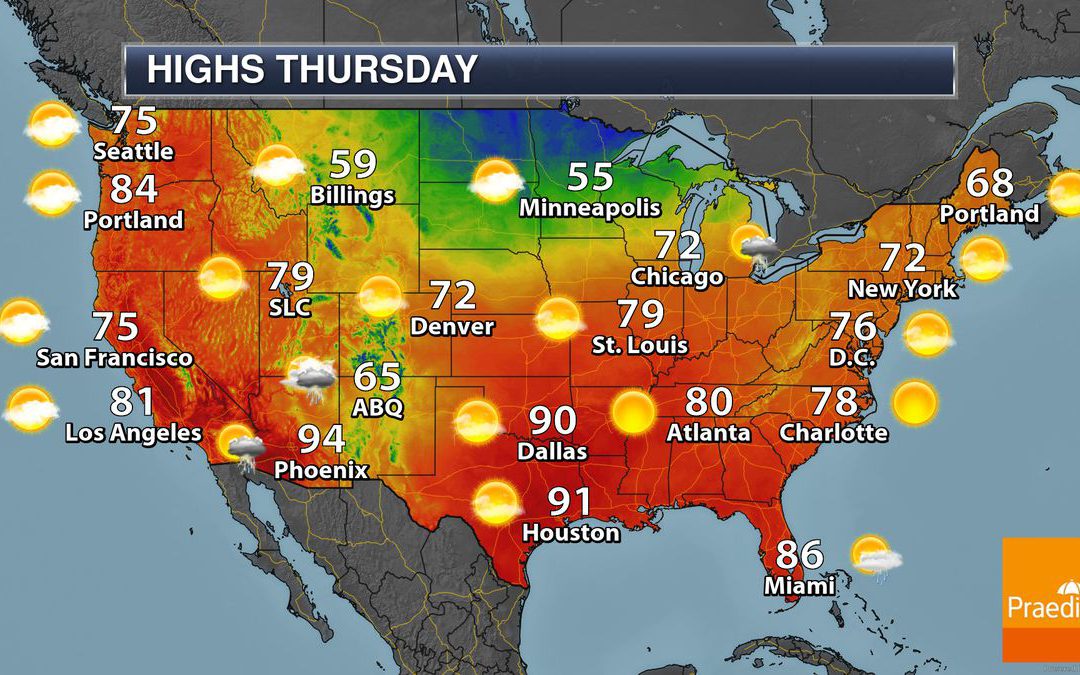 As an area of low pressure moves through the Great Lakes on Thursday, it’ll bring the threat of showers and thunderstorms along with some lake effect snow showers downwind of Lake Superior with it. It is also ushering in much cooler air into the upper Midwest, with places like the Twin Cities likely to set their high early in the day with slowly falling temperatures through the rest of it. Another low-pressure area in the Southwest will bring the threat of storms and some snow as well.

Some pockets of heavier rain will be possible across the Great Lakes into the Northeast and in the Southwest in the next few days. Some areas could have the potential to see up to three inches.

Snow-wise, some light accumulation will be possible at higher elevations of Colorado and New Mexico, as well as downwind of Lake Superior in the U.P. of Michigan and northern Wisconsin, through Friday evening.

More from EarthSky: “Oceanographers at the University of Michigan said on October 4, 2022, that the asteroid that struck Earth and wiped out the dinosaurs – 66 million years ago – also triggered a vast, global tsunami. The great wave started out as more than a mile (1.6 km) high, they said. It was large enough to scour the ocean floor thousands of miles from the Chicxulub impact site on Mexico’s Yucatán Peninsula. And it took some days – “less than a week,” the scientists said – to dissipate. The authors calculated the initial energy contained in this ancient tsunami. And they found it was up to 30,000 times larger than the energy in the devastating December 2004 Indian Ocean earthquake tsunami, one of the largest tsunamis in the modern record. They said in a statement: Any historically documented tsunamis pale in comparison with such global impact.”

Meet the California farmers awash in Colorado River water, even in a drought

More from NPR: “A few hundred farms in the southern tip of California, along the Mexican border, may hold the key to saving the drought-plagued Colorado River from collapse. These farmers, in Imperial County, currently draw more water from the Colorado River than all of Arizona and Nevada combined. They inherited the legal right to use that water, but they’re now under pressure to give up some of it. The Imperial Valley is a place of jarring contrasts. Half is in its natural state, a bone-dry desert. The other half is mile after mile of green fields lined by irrigation canals. A few of the fields are shrouded by showers of water delivered from long lines of sprinklers.”

Most electric car buyers don’t switch back to gas

More from Axios: “People who buy electric vehicles (EVs) really like them, according to U.S. vehicle registration data, which shows most EV owners tend to buy an EV for their next car, too. Why it matters: The data reveals a growing embrace of electric cars as automakers and the federal government pour billions of dollars into EV and battery production. What’s happening: Axios is tracking the historic shift away from gasoline by examining vehicle registration data from S&P Global Mobility. Here’s a peek at the latest data: Roughly two-thirds (65.3%) of EV-owning households that bought a new car in 2022 got another electric. That’s up sharply from the second quarter of 2021, when about 48% of EV-owning households in the market for a new car bought another EV.”