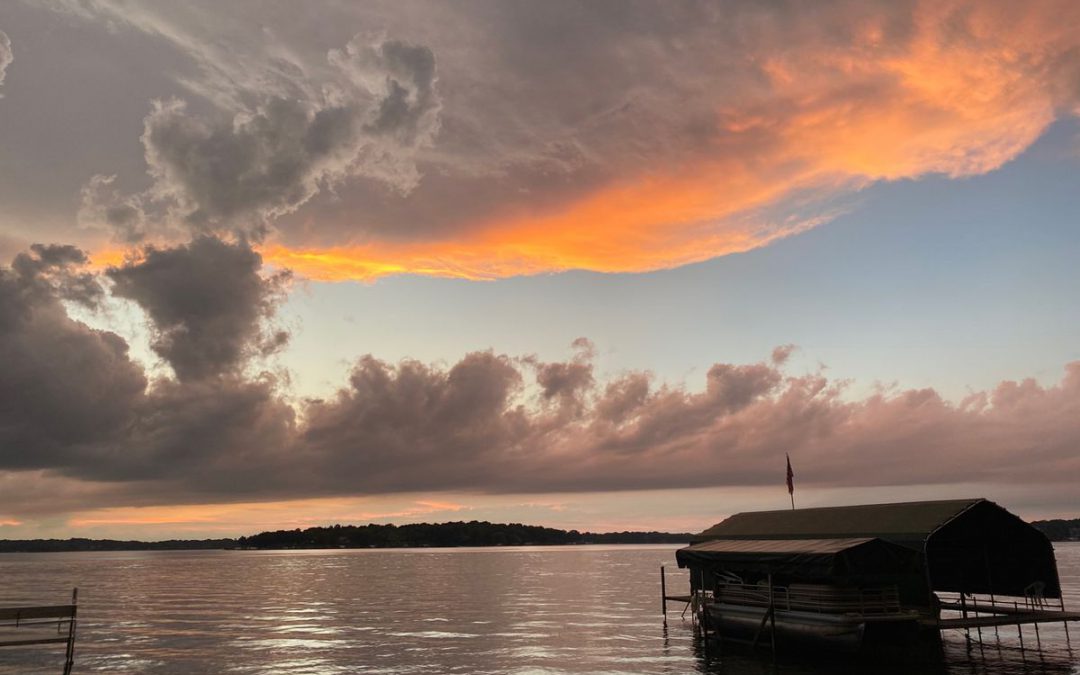 Yes, I have Doppler in my pocket (radar apps on my smartphone). I hate unpleasant surprises. With weather apps and models available online, armchair meteorologists are everywhere.

The approach of steamy frontal boundaries can leave the atmosphere irritable and primed for severe weather. A few tip-offs that a particular thunderstorm may be extra-dangerous? Frequent lightning and large hail. Anything bigger than golfball-size is a tip-off of a powerful updraft capable of not only large hail, but possible tornadoes.

A north breeze cools us off into the 70s today (how I’ve waited to be able to say that in a sentence) but a stormy warm front returns tonight with mid-80s Wednesday, and if the sun stays out for a few hours, 90F on Thursday. Friday and Saturday look cooler, with a few pop-up showers for the Fishing Opener. That said, I don’t see any all-day washouts right now.

Previous Openers brought flurries and windchill, but 2022 should be more tolerable than most years. Good – not great.

The fish are nervous.

Record-Setting Heat on Thursday? If the sun stays out and T-storms don’t keep it too cool for too long there’s a shot we could hit 90F in the metro Thursday afternoon. Temperatures this week feel more like July than May. A cooling trend next weekend may be accompanied by a few showers, especially Saturday.

Heating Up Again Last Week of May? NOAA’s GFS guidance keeps wanting to carve out an omega block with storms stalled over New England and the Pacific Northwest, and relative warmth over the central USA. Confidence levels looking out 2 weeks are low, but I see no signs of persistent chill anytime soon.

An Unprecedented View Inside a Hurricane. Eos focuses a post on how drones on the water may be able to help hurricane intensity forecasts: “…Predicting rapid intensification, normally defined as an increase in maximum wind speed of at least 15.5 meters per second (30 knots) in 24 hours or less, remains extremely challenging and is a top research and forecast priority [Gall et al., 2013; Cangialosi et al., 2020]. If we are to continue improving hurricane intensity forecasts, we will need further advancements in our knowledge and understanding of the processes that affect hurricane intensification. We will also need expanded measurements of the ocean and the atmosphere ahead of and within hurricanes, as well as improvements to hurricane forecast models. Last year, NOAA scientists deployed five uncrewed saildrones in regions of the western Atlantic Ocean and the Caribbean Sea where hurricanes have been historically prevalent. In August, the scientists and pilots in charge of remotely operating the saildrones got a chance to practice positioning them ahead of Tropical Storms Fred and Grace. But the real test came in September as Hurricane Sam headed westward across the Atlantic…”

May 10, 1934: ‘The Classic Dust Bowl’ hits Minnesota. Extensive damage occurs over the region, with near daytime blackout conditions in the Twin Cities and west central Minnesota. Dust drifts cause hazardous travel, especially at Fairmont where drifts up to 6 inches are reported. Damage occurs to personal property due to fine dust sifting inside homes and businesses.

Climate Change Means More Rain Will Fall, But Its Impact on Severe Storms is Less Clear. CBC News summarizes the state of the science – here’s an excerpt: “…Although we see a clear link between climate change and damaging rainfall events, the link between the other impacts of severe thunderstorms — like hail and tornadoes —aren’t easy to predict. “When it comes to severe convective storms, we don’t have such a high confidence,” says Xuebin Zhang, a research scientist with Environment and Climate Change Canada. “We don’t really have lots of good observations to help us understand what has changed in the past. So we don’t know if severe convective summer storms have increased or decreased.” Thunderstorms are common occurrences in our summers but they need specific conditions to form. They like an unstable environment, they need moisture and they need something to get them started. In the weather world, we call that a trigger...”

How Climate Scientists Keep Hope Alive as Damage Worsens. Here’s a clip from a story at AP News: “…The coping technique these scientists have in common is doing something to help. The word they often use is “agency.” It’s especially true for climate researchers — tarred as doomsayers by political types who reject the science. Gill, who describes herself as a lifelong cheerleader, has also battled with depression. She said what’s key in fighting eco-anxiety is that “regular depression and regular anxiety tools work just as well. And so that’s why I tell people: ‘Be a doer. Get other there. Don’t just doomscroll.’ There are entry level ways that anyone, literally anyone, can help out. And the more we do that, ‘Oh, it actually works,’ it turns out...”

On Climate “Doomism”: Heart and Mind Reasons to Resist It. Some helpful advice in a post at Yale Climate Connections: “...We can, with a reasonable amount of effort, simply decide we won’t let hopelessness take charge of what we think and feel, what kind of people we want to be, and especially how we act in the world. Read on for some anti-doomer encouragement. Start with these two very good overview articles:

As Penn State climate scientist Michael Mann points out, to give up is to join the opposition: the big carbon polluters want us to think they’ve already won. He also reminds us that our situation is one of urgency (we really do have to act quickly) and agency (our actions matter a lot)...”

Americans are Missing a Key Stratum of Modern Knowledge. Why isn’t Earth science taught in our schools on a consistent basis? The Atlantic delves in – here’s an excerpt: “…You need [an Earth-science] education to live with our changing hazardous environment. I truly believe that,” Jazmin Scarlett, a volcanologist at the University of East Anglia, in the United Kingdom, told me. This knowledge can help people make better sense of the changes that they see in the environment, and how to cope with those changes. But the fact that I took Earth science at all makes me something of an anomaly. In the United States, only 7 percent of high schoolers take Earth-science courses, according to a 2010 study. (Scarlett said that Earth-science education in the U.K. is not much better.) And I couldn’t take AP Earth science in high school, because the course didn’t exist back then. These days, the College Board does have two AP courses that are related to Earth science: environmental science and human geography. High school in particular matters because many of us stop taking science after that. Yet Earth science generally disappears from the curriculum after middle school…”

Filipino Inquiry Finds Big Polluters “morally and Legally Liable” for Climate Damage. The Guardian reports: “The world’s most polluting companies have a moral and legal obligation to address the harms of climate change because of their role in spreading misinformation, according to an inquiry brought about by Filipino typhoon survivors. Experts say the long-awaited report published on Friday, which concludes that coal, oil, mining and cement firms engaged in “wilful obfuscation” of climate science and obstructed efforts towards a global transition to clean energy, could add fuel to climate lawsuits around the world. The inquiry by the Philippines Commission on Human Rights began seven years ago after a petition by survivors of Typhoon Haiyan and local NGOs…”