Climate Change May Make Pandemics More Common. With permafrost melting what can possibly go wrong? Here’s an excerpt from WebMD: “The likelihood of an extreme infectious disease epidemic – similar to the COVID-19 pandemic – could triple in the coming decades, according to a recent study published in the Proceedings of the National Academy of Sciences. The chance of someone seeing a pandemic like COVID-19 during their lifetime is about 38%, which could double in the years to come. The possibility of another pandemic is “going to probably increase because of all of the environmental changes that are occurring,” William Pan, PhD, one of the study authors and an associate professor of global environmental health at Duke University, told ABC News…”

70% of Recent Home Buyers Considered Disaster Risk in Deciding Where to Live. Always a good idea to get a handle on natural disaster risk before you buy a place – if nothing more than to determine if you can afford insurance. Yale Climate Connections reports: “Prospective home buyers usually consider how many bedrooms and bathrooms a house has and its price per square foot. But that’s not all. “Seven out of 10 recent home buyers considered natural disaster risk when deciding where to live,” says Sara Brinton of Realtor.com. She says many buyers are growing particularly concerned about wildfires. So the real estate website now provides information on wildfire risk with a third-party tool called Fire Factor. It ranks properties on a scale from one to 10 based on their risk of being damaged by wildfire over the next 30 years…” 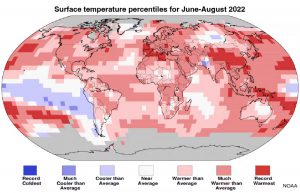 2022’s Supercharged Summer of Climate Extremes: How Global Warming and La Nina Fueled Disasters on Top of Disasters. The Conversation has a good summary of yet another crazy summer season; here’s an excerpt: “There’s an old joke about the fellow who has his left foot in a bucket of ice water and the right in a bucket of hot water, so that his overall temperature is average. That seemed to apply to the climate during 2022’s northern summer of extremes. Global warming is undoubtedly a factor, but just how the increasing extremes – heat waves, droughts and floods, sometimes one on top of the other – are related can be bewildering to the public and policymakers. As a climate scientist, I’ve been working on these issues for more than four decades, and my new book, “The changing flow of energy through the climate system,” details the causes, feedbacks and impacts. Let’s take a closer look at how climate change and natural weather patterns like La Niña influence what we’re seeing around the world today...”

Climate Change Likely Increased Extreme Monsoon Rainfall, Flooding Highly Vulnerable Communities in Pakistan. Once again a warmer, wetter atmosphere almost certainly increased monsoon rainfall amounts according to World Weather Attribution: “…Pakistan is reported to have received more than 3 times its usual rainfall in August, making it the wettest August since 1961. The two southern provinces, Sindh and Balochistan, each experienced their wettest August ever recorded, receiving 7 and 8 times their usual monthly totals. The Indus river, that runs the length of the country, burst its banks across thousands of square kilometres, while the intense rainfall also led to urban flash floods, landslides. The rains and resulting flooding affected over 33 million people, destroyed 1.7 million homes, and nearly 1500 people lost their lives (NDMA, 2022; VOA News, 2022). On August 25th, the government declared a national emergency. Damages likely exceed preliminary estimates of around US$30 billion...”