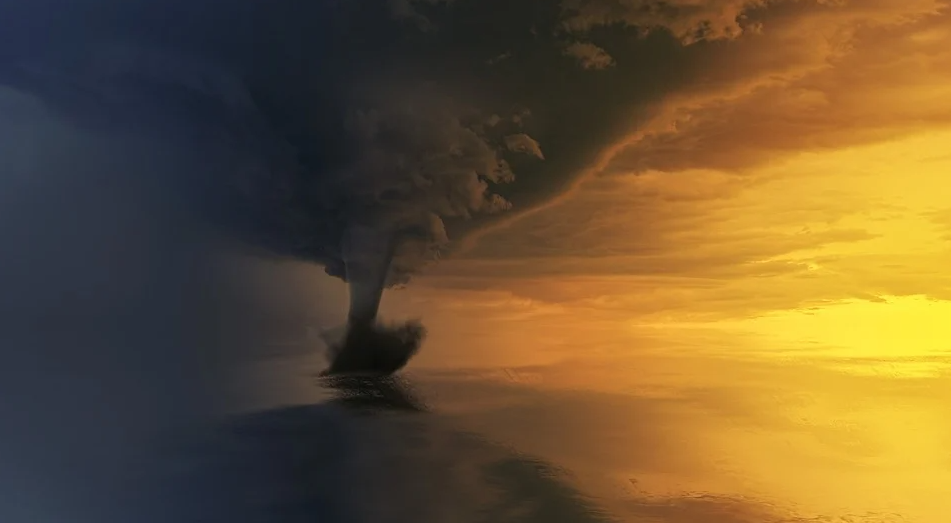 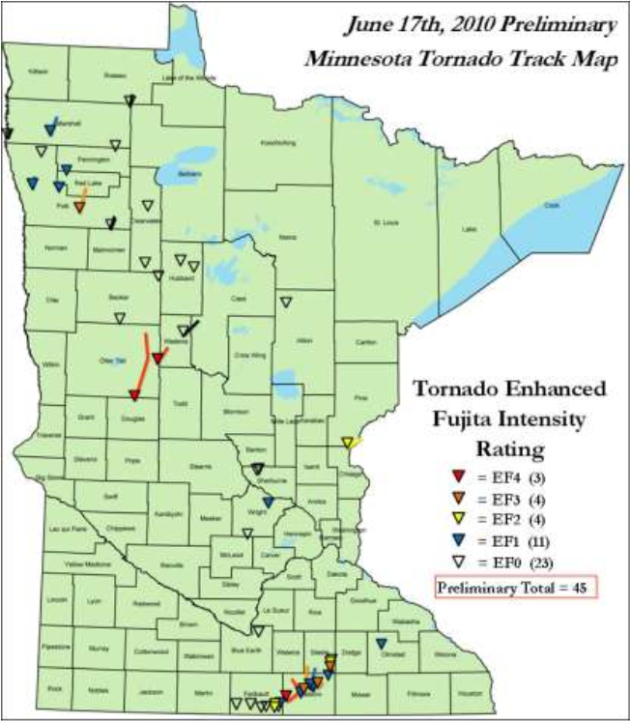 Monday marks the nine-year anniversary of the June 17th, 2010, tornado outbreak across Minnesota. On this date, 48 tornadoes touched down across the state, with the most concentrated reports of tornadoes occurring in southern and northwestern Minnesota. Three EF-4 tornadoes occurred in the state, with three fatalities reported. Read more from the Minnesota State Climatology Office: “On June 17, a powerful storm system plowing through Minnesota spawned numerous tornadoes, damaging thunderstorm winds, hail, and flooding rains. Three people were killed by the tornadoes, many injuries were reported, and property damage was extensive. The fatalities occurred at three widely dispersed locations; Mentor in Polk County, near Almora in Otter Tail County, and near Albert Lea in Freeborn County. A large number of homes in Wadena of Wadena County were damaged or destroyed.” 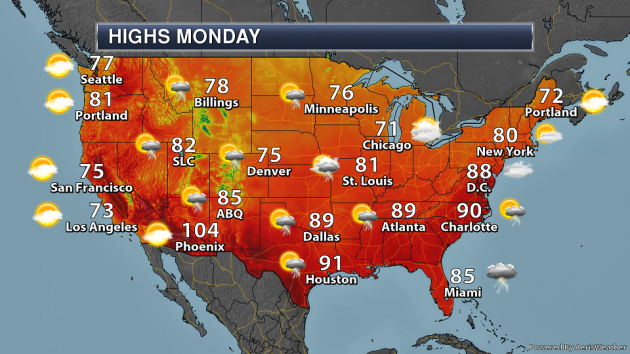 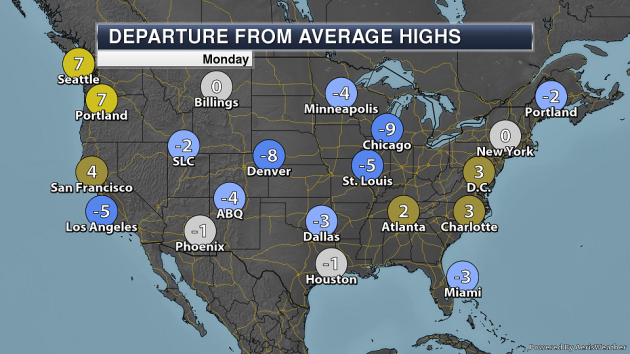 On Monday, many areas of the eastern two-thirds of the nation will see the potential of showers and storms due to moisture moving out of the Gulf of Mexico and a somewhat stationary boundary from the Ohio Valley to the Northern High Plains. Areas that remain dry through the day could include parts of New England, the Great Lakes, the West Coast, and parts of the Desert Southwest. 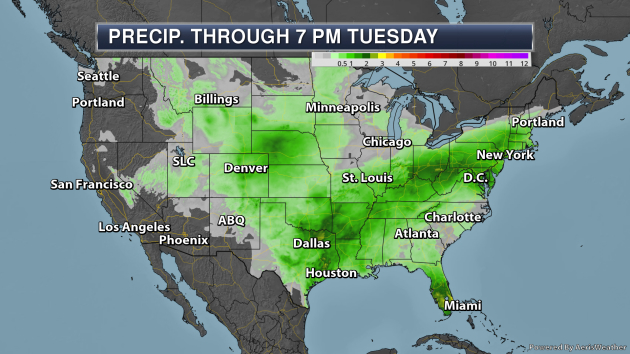 Through Tuesday evening, a few pockets of heavy rain will fall across the eastern third of the United States. The first is expected along the frontal boundaries positioned from the Northeast into the Southern Plains, where some areas of 1-2″ of rain are possible. A second is expected in parts of Nebraska with 1-2″ possible there as well. The third will be across the Florida peninsula, where rainfall tallies of up to 4″ will be possible just north of Miami.

More from Wired: “Camp Century was a perfect example of Cold War paranoia and eccentricity: an improbable outpost that was expensive to build, difficult to maintain, and unpleasant to live within. The irony was that Camp Century was also the site of an inspired and historic engineering experiment. It just happened to be an experiment that the US Army didn’t care that much about. In fact, the importance of the research project being conducted at Camp Century wouldn’t be truly understood for decades. It was there, in a cavern located dozens of feet below the surface of snow and ice, that scientists were perfecting a new method that would allow them to read Earth’s history. A small number of glaciologists had already come to understand that the ice sheet probably contained a frozen archive of long-ago events and temperatures—that it was encrypted, in some yet-to-be-deciphered way, with a code to the past.”

Astronomers discover rare, new type of galaxy on the brink of death

More from c|net: “Astrophysicists at the University of Kansas have spotted an incredibly rare type of galaxy for the first time, fundamentally changing our understanding of how galaxies die. At the 234th meeting of the American Astronomical Society on Thursday, Allison Kirkpatrick presented her discovery of “cold quasars”, incredibly bright, dying galaxies in the farthest reaches of the cosmos. Quasars are basically mammoth supermassive black holes surrounded by huge amounts of gas and dust, making them super bright — much brighter than a typical galaxy. They can be created when two galaxies merge and their black holes collide. For instance, our galaxy, the Milky Way, is on a collision course with the neighboring Andromeda galaxy. This event, which will occur billions of years from now, will signal the end of the two galaxies and the creation of a quasar.”

More from Marketplace: “Living an always-connected, app-driven life isn’t great for the environment. It’s an issue highlighted by several recent studies that look at the carbon emissions of artificial intelligence, cryptocurrency and even streaming music. They all require lots of power, and that power pours a lot of carbon dioxide into the atmosphere. Researchers have been surprised by what they’ve found: Bitcoin mining and maintenance has the same carbon footprint as Kansas City. Training one typical AI model emits as much CO2 as five cars over their entire lifetimes. And streaming music services dump between 25,000 and 40,000 tons of CO2 into the air every year in the U.S. alone.”