Areas Of Heavy Rain For Memorial Day – National Weather Forecast for Monday, May 25, 2020 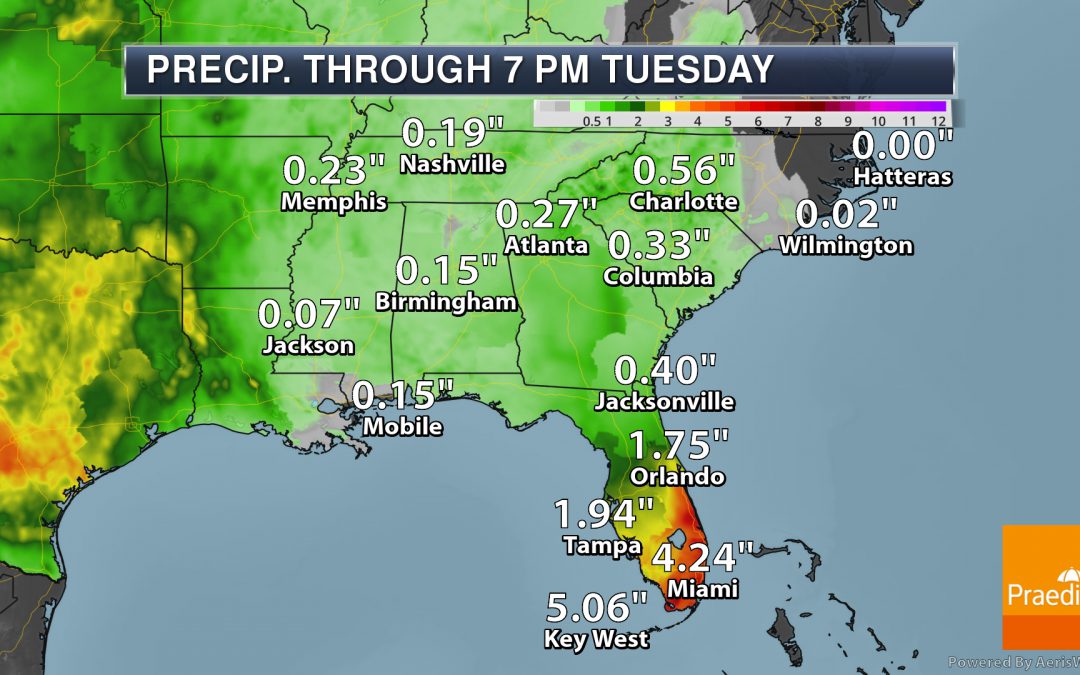 Heavy rain will impact southern Florida through the Memorial Day holiday, with the potential of up to 6″ of rain in some locations. Due to this, a Flood Watch has been issued, including Miami.

Heat Builds In The Southwest More from Business Insider: “Clouds and rain could thwart the historic first launch of NASA astronauts in a SpaceX spacecraft on Wednesday. The mission, called Demo-2, will fly seasoned NASA astronauts Bob Behnken and Doug Hurley in the company’s Crew Dragon spaceship. The flight’s success would effectively resurrect human spaceflight from America after nearly a decade of dormancy. But a forecast of cloudiness, rain, and isolated thunderstorms leaves only a 40% chance that the spacecraft will be able to safely launch on Wednesday, according to the space wing of the US Air Force. If the rain makes launch untenable, SpaceX and NASA will fall to their backup date: Saturday, May 30.”

More from Bloomberg: “First the virus lockdown shuttered the two dairies where farmer Gavrila Tuchilus sells the milk from his 1,500 cows. Then his fields dried up, forcing him to abandon his barley crop for the first time in 39 years. “A double war is taking place,” said Tuchilus, from Matca, a village in southeast Romania. “It’s a war against the invisible Covid-19 and a war with the drought.” The dry spell that’s scorching parts of the European Union’s eastern wing is devastating harvests and exacerbating what’s expected to be the region’s deepest economic downturn since at least the fall of communism.”

Weather Disasters Are Mounting Amid The Pandemic. Michigan Floods Are Just The Latest.

More from the Huffington Post: “Rivers swollen from days of record-breaking rain topped two dams in Michigan’s Midland County this week, flooding neighborhoods with enough brown, muddy water to fill an Olympic-size swimming pool every two seconds. The flooding sent 10,000 residents who had sheltered in place from the coronavirus pandemic scrambling for higher ground. Parts of the county 140 miles northwest of Detroit are facing 9 feet of flooding as nearly 5 inches of rain fell over 36 hours, the kind of deluge that takes place only once every 25 to 50 years, meteorologist Paul Gross said. The National Weather Service called the disaster “extremely dangerous” and urged drivers who encounter inundated roads to “turn around, don’t drown.””