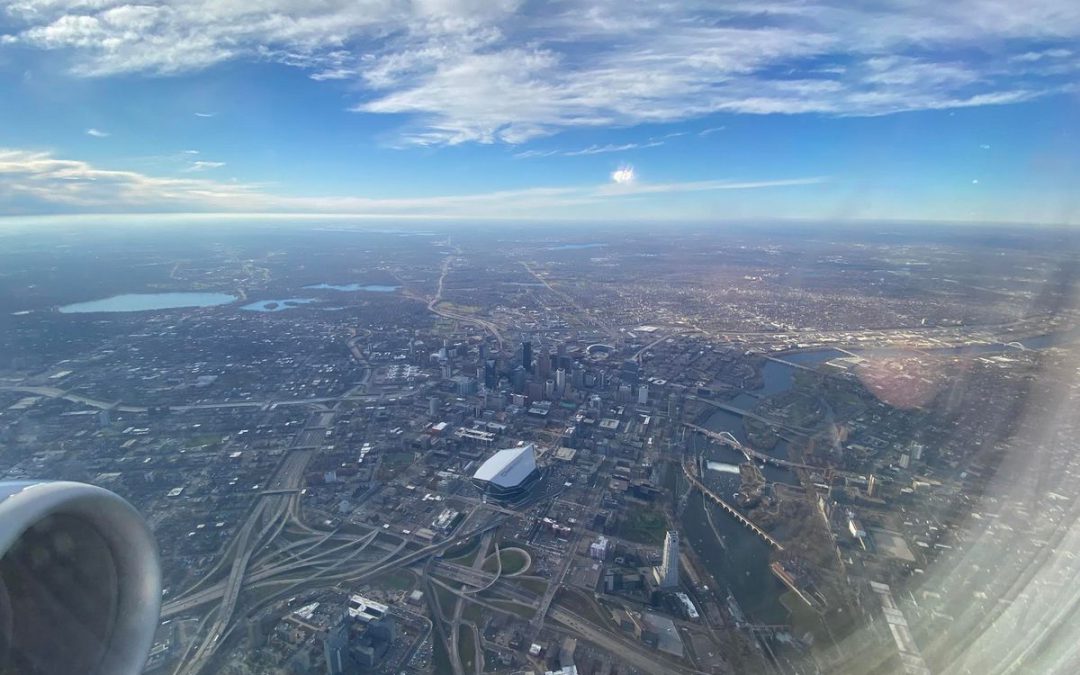 Over the years I’ve fielded more gripes about the darkness than the cold. Compounding our dark moods: November and December are the cloudiest months of the year.<p>According to NOAA, November brought only 10 cloudy days at MSP. Normal is 18. It’s not your imagination: the sun WAS more visible. A persistent west wind aloft howling from Seattle tends to be mild and dry of us; most of the moisture squeezed out west of the Rockies. Meaning few storms. Dribs and drabs of rain and snow. Insert yawn here.

A flow from the Pacific vs. the Arctic means a [cough- cough] “mild bias” continues into at least mid-December.

Close encounters of slush are possible; a few inches may fall over the northern third of Minnesota early next week, when metro temperatures may poke up into the 40s once more. Wow.

Clipped Again. Not very exciting from a meteorological standpoint (or from the vantage point of anyone who craves snow), but our weather is dominated by a series of clippers into next week – each fast-moving low pressure system putting down a little snow and rain, followed by relatively brief jabs of chilly air.

Trending Milder Than Average. A Pacific-flavored wind flow keeps us on the mild side of average (whatever “average weather” is in Minnesota) with more 30s and 40s, even another run at 50s on Wednesday. Any accumulating snow will be limited to the northern third of Minnesota and Wisconsin, with the best chance of a few inches Sunday into Tuesday.

Mid-December: Coldest Air Stays North. A (supernaturally) persistent west to east (zonal) flow across the USA keeps the most bitter Canadian/Siberian air bottled up north of Minnesota for the next 2 weeks – a few spasms of cold, but no prolonged polar punches in sight just yet.

Atmospheric Rivers Keep Flooding Pacific Northwest: Climate Nexus has headlines and links: “Two atmospheric rivers dumped even more rain on Washington and British Columbia over the (American) Thanksgiving weekend, and another is expected to pummel the already-widely-flooded region today. Some areas have been deluged by more than 2 feet of rain in the last 30 days. Less than two weeks ago as many as 18,000 people were cut off by flooding in southern British Columbia. Climate change is worsening extreme precipitation events and flooding. The warming, caused mainly by extracting and burning fossil fuels, also supercharges wildfires, which further exacerbates the flooding by denuding mountainsides of erosion protection.” (Axios, Washington Post $, AP, NPR, CNN, New York Times $; Climate Signals background: Extreme precipitation events, Flooding)

Cloud Seeding Gains Steam as West Faces Worsening Droughts. The Washington Post’s Capital Weather Gang has the story: “As the first winter storms rolled through this month, a King Air C90 turboprop aircraft contracted by the hydropower company Idaho Power took to the skies over southern Idaho to make it snow. Flying across the cloud tops, the aircraft dropped flares that burned as they descended, releasing plumes of silver iodide that caused ice crystals to form and snow to fall over the mountains. In the spring, that snow will melt and run downstream, replenishing reservoirs, irrigating fields and potentially generating hundreds of thousands of additional megawatt hours of carbon-free hydropower for the state. Idaho Power, a private utility serving more than half a million customers in southern Idaho and eastern Oregon, has used cloud seeding to pad its hydroelectric power production for nearly two decades…”

Top Storms of 2021 Hurricane Season. Scuttlebutt Sailing News (!) has a very good summary: “As the Atlantic Hurricane Season comes to a close on November 30, a look back shows 2021 was another above average year with the Atlantic Basin once again finishing off the full 21-name list. While the 2021 discussion will forever belong to Ida, there were a number of storms that affected the United States. The WBRZ Weather Team has listed some of the more significant systems based off of a criteria of meteorological significance, financial losses, and fatalities:

#1 – Hurricane Ida: Ida made landfall at Port Fourchon (Louisiana) on August 29 with 150 mph winds. Storm surge and extreme winds destroyed the city of Grand Isle. A staggering 172 mph wind gust was recorded on a ship in Port Fourchon. Hurricane Ida maintained major hurricane status as it tracked inland through LaPlace. From there, hurricane force winds continued along the I-55 corridor to the Louisiana/Mississippi state line...”

Double-Striking Hurricanes Expected to Increase. I found an interesting post at news4jax.com; here’s the intro: “Areas along the Gulf coast including Florida and our east coast are twice as likely to get two hurricane landfalls within just 10 days according to a study published in the AGU journal Geophysical Research Letters. Florida and Louisiana are most likely to experience “sequential landfall,” where one hurricane moves over land faster than infrastructure damaged in a previous storm can be repaired. The researchers estimate this timescale between hurricanes to be 10 days for those states. Being hit by two storms in quick succession gives communities and infrastructure less time to recover between disasters — a significant problem for a region with a swelling population that has struggled to recover following previous natural disasters…”

Norway is Running Out of Gas-Guzzling Cars to Tax. WIRED.com reports: “When it comes to sales of electric cars, Norway is in a league of its own. In September, battery-powered electric vehicles accounted for 77.5 percent of all new cars sold. That figure makes Norway a world leader by a long way—leapfrogging over the UK, where 15 percent of new car sales were electric as of October, and the US, where that number is just 2.6 percent. Norway’s electric dream has been credited to a series of tax breaks and other financial carrots that mean brands like Tesla can compete on price with combustion engines. But these incentives—and their success—have created a unique predicament: Norway is running out of dirty cars to tax. It’s quite a big problem…”

Rolls Royce Says Its Electric Airplane is World’s Fastest. Watch this space – if ever there was a moment for electrification of air travel it’s now. Here’s an excerpt from MSN.com: “Rolls-Royce announced Friday that its Spirit of Innovation electric aircraft topped 387 mph during a recent flight test and is now the fastest all-electric airplane in the world. The aerospace and technology company, which is separate from Rolls-Royce Motor Cars, said its electric plane shattered the previous speed record by 132 mph over nearly 2 miles on Tuesday, clocking a speed of 345.4 mph…”

NASA Wants to Defend Earth from Asteroids – So It’s Slamming a Spacecraft Into One. The Verge has details: “The mission is called DART, or the Double Asteroid Redirect Mission, and its purpose is in the name. The spacecraft is going to try to redirect an asteroid in space for the first time. The idea is pretty simple: DART is going to ram into the object moving at roughly 15,000 miles per hour, transferring its momentum to the asteroid. This body slam should be enough to deflect the asteroid off its original path by a fraction of 1 percent. The asteroid DART is targeting doesn’t pose any threat to Earth, and there’s nothing the mission can do to change that. NASA just wants to see if bumping a space rock well ahead of time could change its direction enough so that over the long-term, it would whiz by a planet safely instead of hitting it…”

Geopsychology: Your Personality Depends on Where You Live. Really? Big Think presents some compelling evidence: “Does where you live have any bearing on the kind of personality you have? Science says yes, and these maps show how. But which science is that, exactly? It sounds like something cooked up after hours in the back alley between the geography and psychology departments. When this rogue discipline becomes respectable enough to get its own lab, it will need its own name. “Psychogeography” is already taken — basically, it’s a fancy term for “walking while moody.” “Geopsychology,” however, is still available. And it sounds just about right to describe the systematic study of regional differences in the distribution of personality traits...”

November 30, 2006: Lake effect snow occurs downwind of the larger lakes in Minnesota. Northwest winds from 8 to 12 mph accompanied an air mass in the single digits. This moved over lakes with water temperatures near 40 degrees. A cloud plume from Mille Lacs stretched all the way to Siren Wisconsin. Snow from Ottertail Lake and Lake Lida reduced visibilities at Alexandria to a few miles. Even some low clouds formed from Lake Minnetonka and were observed at Flying Cloud Airport.

November 30, 2000: A surface low pressure system moves into extreme southwestern Minnesota from South Dakota. The heaviest snow reported was in the 6 to 8 inch range, and fell in a narrow band just southwest of the Minnesota River in and around the Canby (Yellow Medicine County) and Madison (Lac Qui Parle County) areas. Northeast winds rising out of the Minnesota river valley up the slopes of the Buffalo Ridge in southwest Minnesota helped enhance snowfall amounts. The northeasterly winds between 10 and 20 mph were responsible for producing visibilities in the one to two mile range.

November 30, 1896: Bitterly cold temperatures are reported across Minnesota. A low of 45 below zero occurs at the Pokegama Dam.

Minnesota, the Midwest are Central in Combating Climate Change. Star Tribune provides analysis: “Earth lovers, here’s today’s quiz: Which sector of the Minnesota economy is spewing the most planet-warming carbon into the atmosphere? Is it A) transportation; B) electricity generation; or C) agriculture, forestry and other land uses? If you picked A, you get an A — and you’ll likely agree that it was a good thing that the chair of the Minnesota House Transportation Finance and Policy Committee was in Glasgow, Scotland, for the recent United Nations climate change Conference of the Parties, known as COP26. Rep. Frank Hornstein, DFL-Minneapolis, was one of only two state legislators who joined more than 60 other Minnesotans at COP26…”

Exxon Lobbyist Questions Urgency of Climate’s Catastrophic Risks. The Washington Post (paywall) reports: “Just last month, ExxonMobil CEO Darren Woods assured lawmakers his company neither disputed the scientific consensus on climate change nor lobbied against efforts to cut carbon pollution. But a lobbyist for the oil giant struck a different tone less than two weeks later, according to a recording obtained by The Washington Post, suggesting global warming might not be so dire. Erik Oswald, a vice president and registered lobbyist for Exxon, during a Nov. 9 panel hosted by the Interstate Oil and Gas Compact Commission in Santa Fe, N.M., highlighted his firm’s financial interest in curbing carbon emissions rather than the dangers posed by climate change. “Is it catastrophic inevitable risk? Not in my mind. But there is risk,” he said, according to a recording that the watchdog group Documented shared with The Post…”

White House Launches New Climate Policy Division Within OSTP: More links and headlines from Climate Nexus: “The White House launched a new division within the Office of Science and Technology Policy to develop climate policy on Wednesday. Sally Benson will head the new effort to craft policy to move the U.S. towards achieving the goal of 100% clean electricity by 2035, including shifting away from fossil fuels to renewable energy and electrifying America’s building and transportation sectors.” (Washington Post $, Politico Pro $, CNN)