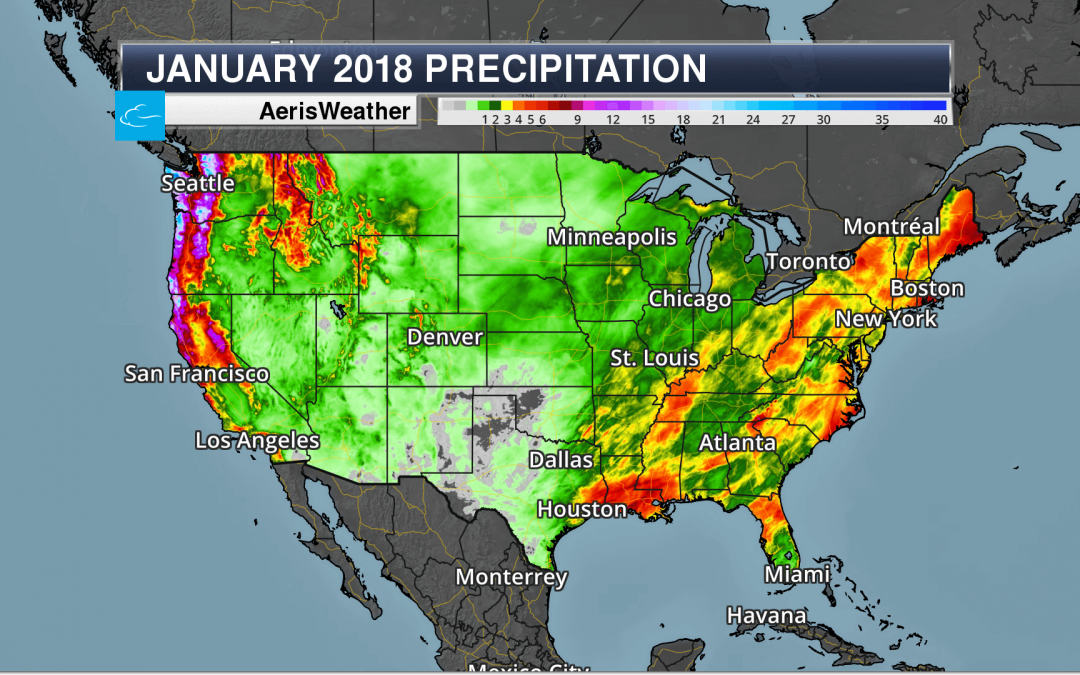 Warmth dominated out west during January 2018, with scattered areas of excessive rainfall across the country. We also saw quite dry areas of the nation, especially in parts of the South. In this edition of D.J.’s PraeDigits, we take a look back at January 2018 across the nation.

In Tucson, they saw 19 days with a high of 75+, marking the most on record for the month of January. Meanwhile, in Phoenix (which saw their third warmest January on record), they recorded 80+ degree highs on each of the last four days of the month. That is the earliest first four day stretch of 80+ temperatures (previous record: January 31-February 3, 1954).

San Juan also saw a top ten warmest January on record. Here’s a partial list of those that were in the top ten:

A Cold Eastern U.S. Led To Only A Couple Locations In The Top Ten

While the western United States was warm in January, many areas of the eastern U.S. saw cooler than average weather. Numerous cities even saw their coldest first week of January on record.

Even with the cooler than average air, only two long-term climate cities ended up recording a top ten coldest January on record. Those locations were:

Areas of the eastern United States saw heavy precipitation during the month of January, with over 4″ of liquid falling in areas. This was due to numerous storm systems bringing precipitation (some of it in a wintry form) across portions of the region throughout the month. The wet season continued as well in the Pacific Northwest, with heavy precipitation falling.

Ten long-term climate locations saw a top ten wettest January. These locations, which were scattered across the country, were:

Dry Weather In The Southern U.S.

Precipitation departures of at least 2″ were common across portions of California – especially across the Sierra, which had snow pack that was far below average for this time of year as of February 1st. We also saw drier than average weather across parts of the South and Southeast in January 2018, which is typical of a La Nina winter pattern.

What Could The Month Of February Hold?

Dry weather is expected to continue according to the Climate Prediction Center across the southern United States, including in California. Many of these areas are currently under drought conditions. Wetter than average weather is possible from the northern Plains and Rockies into New England.