Does Unprecedented Western Heat Wave Signal Record-Hot Summer for US? 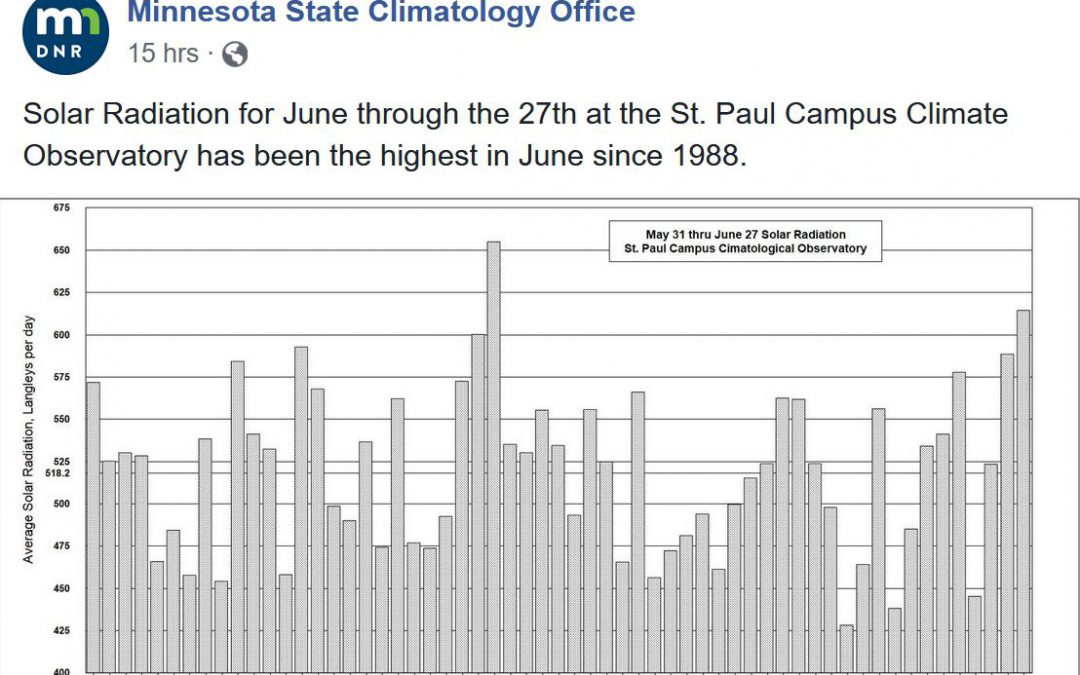 For the record I’m very pro-sunshine. I feel more energy and optimism when Earth’s nearest star is visible. Most of us do. Yet there is such a thing as too much sunshine. There’s a good reason why corn doesn’t grow in southern California. Minnesota has good soil, sunshine and consistent rains. Well, most years.

June rain was less than half of normal; according to the Minnesota State Climatology Office the metro area just experienced the sunniest June since 1988. A glut of sunshine dries the soil, evaporating water from our lakes and rivers, accelerating drought conditions across the state. A sunny warming trend is likely into Sunday with low to mid 90s this weekend – close to record territory up north. The definition of lake-worthy! Assuming you can get the pontoon off the lift.

A stray storm may pop Monday and models are consistently predicting a wetter pattern next week with several swarms of storms.

In the meantime, enjoy San Diego with lakes. And corn. And big rivers thrown in for good measure!

Smoke Gets In Your Eyes. You may have noticed the sky had a muddy, hazy look yesterday. That was smoke from western fires being swept over Minnesota – something we may see more of in the weeks and months to come.

Canada Sets New All-Time Heat Record of 121 Degrees Amid Unprecedented Heat Wave. Capital Weather Gang put the heat into perspective: “…Perhaps the most astonishing heat occurred Tuesday in British Columbia where the high temperature in the village of Lytton soared to 121 degrees, setting Canada’s national heat record for a third straight day. For perspective, this temperature is more extreme than the all-time high in Las Vegas, 117, and higher than most places in the Lower 48 states outside the Desert Southwest. “Words cannot describe this historic event,” tweeted Environment Canada’s British Columbia branch. According to world weather records expert Maximiliano Herrera, the 121-degree reading also set a new world record for the most extreme high temperature ever observed north of 45 degrees latitude…”

4th of July Warming Since 1970. Climate Central has more details: “Climate Central analyzed July temperature data since 1970 for 246 locations across the country. The results show a clear warming trend:

Heating Up Again. NOAA’s models are a bit more aggressive with holiday weekend warming than ECMWF, hinting at low to mid 90s by Sunday and Monday. There’s little doubt temperatures will flirt with 90F as early as Saturday. Sunday may be the toastiest day, with a little convection keeping temperatures a few degrees cooler on Monday.

A Smoking Hot GFS Outlook. A few days above 100F in mid-July? I’m skeptical, but after what we just witnessed in the Pacific Northwest and British Columbia very little would surprise me right now. Let’s see if there is model consistency from run to run.

Simmering Heat. GFS continues to keep the core of any blast-furnace heat just south of Minnesota, but if the latest run verifies much of America will be running the A/C full-blast into mid-July.

June Rainfall Was a Disappointment. The Twin Cities metro received roughly half as much rain as falls during a normal June, our wettest month of the year, on average. Statewide, Minnesota experienced a 2-4” rainfall deficit last month, which doesn’t bode well for the rest of the summer.

Warm Bias Continues – Dry Signal Weakens for Minnesota. NOAA NMME guidance from the Climate Prediction Center continues to show a strong and persistent warm signal into September, but it doesn’t look quite as dry for the Upper Midwest as it did a few weeks ago.

Pacific Northwest Bakes Under Once-In-A-Millennium Heat Dome. CBS News explores the probability of such an extreme heat event, with temperatures 40-50F above normal: “…In other words, statistically speaking, there is a 1 in 10,000 chance of experiencing this value. So, if you could possibly live in that spot for 10,000 years, you’d likely only experience that kind of heat dome once, if ever. It is worth noting that our historical record is limited and statistics like this are very sensitive to small changes. But if it seems like an overstatement to say there is a 1 in 10,000 chance of having a heat dome like this, it is certainly not an overstatement to say this is the kind of event you would expect to experience once in 1000 years…”

It’s 118F in the Arctic, Which Sure Seems Bad. No, I doubt this is a positive development. Here’s an excerpt from a post at mic.com: “A heat wave is sweeping across the southwestern United States at the moment, but it’s not the only place on the planet feeling some extremely hot temperatures. According to satellite images taken by the European Union, it appears that surface temperatures have reached 118 degrees in Siberia. Yes, that Siberia. The blistering 118-degree temperature occurred on the ground in Verkhojansk, a small town in Eastern Siberia. It wasn’t alone in experiencing astonishingly hot weather. According to the satellite data recorded by the European Space Agency’s Copernicus Sentinel satellites, Govorovo experienced ground temperatures of 109 degrees, while Saskylah reached 98.6 degrees during the heat wave. According to Earther, it’s the hottest the region has been since 1936...”

How Climate Change “Loads the Dice” for Heat Waves. NBC News helps to connect the dots: “Larry O’Neill knew a heat wave was coming, but he still couldn’t believe what the climate models were telling him. The projected temperatures for this week were so unusually high — between 115 and 120 degrees Fahrenheit across parts of the Pacific Northwest — that O’Neill, Oregon’s state climatologist, felt something must be off. “The predictions seemed completely outlandish,” said O’Neill, an associate professor at Oregon State University. “They were so crazy insane that professional forecasters and people like myself thought something must be wrong with the models…”

Nowhere is Ready for This Heat. With any luck new infrastructure will take a radicalized climate into consideration, reports The Atlantic: “…In 2018, he and his colleagues looked at whether any state department of transportation was planning for the precipitation thresholds of the future. Essentially none of them were, he said. Since then, a few states have integrated the new normals into their highway manuals. But even if you know that climate change will happen, bending civil engineering to that future isn’t easy—and, at least for now, it requires some art and argument. An engineer building a bridge can test and calculate how much weight it can bear, and another engineer can check the math, Samaras said. No such standard exists for the climate, and “engineering standards take a long time to propose, promulgate, and get adopted.” Even if an agency—the National Oceanic and Atmospheric Administration, perhaps—started this work now, another decade would pass without resilience standards…”

The Siege of Miami. Elizabeth Kolbert writes for The New Yorker, asking questions many in south Florida apparently don’t want to hear: “…To cope with its recurrent flooding, Miami Beach has already spent something like a hundred million dollars. It is planning on spending several hundred million more. Such efforts are, in Wanless’s view, so much money down the drain. Sooner or later—and probably sooner—the city will have too much water to deal with. Even before that happens, Wanless believes, insurers will stop selling policies on the luxury condos that line Biscayne Bay. Banks will stop writing mortgages. “If we don’t plan for this,” he told me, once we were in the car again, driving toward the Fontainebleau hotel, “these are the new Okies.” I tried to imagine Ma and Pa Joad heading north, their golf bags and espresso machine strapped to the Range Rover...”

A Space Laser Shows How Catastrophic Sea Level Rise Will Be. A post at WIRED.com (paywall) got my complete and undivided attention; here’s an excerpt: “…Today in the journal Nature Communications, scientists describe how they used ICESat-2’s new lidar data to map the planet’s land that’s less than 2 meters above sea level, which makes it vulnerable to the creep of sea level rise. Marrying this data with population figures, they calculated that 267 million people currently live in these at-risk areas. Assuming a sea level rise of 1 meter by the year 2100, they project that 410 million people will ultimately live in an affected zone. Asian countries like Bangladesh and Indonesia are particularly vulnerable, but the United States and Europe will also have no shortage of at-risk populations…”

Miami Condo Collapse Prompts Questions Over Role of Climate Change. Salt water and concrete don’t mix well, and rising seas may be one (of many) reasons that combined to create a tragedy in Surfside. Details via The Guardian: “The disaster has highlighted the precarious situation of building and maintaining high-rise apartments in an area under increasing pressure from sea-level rise. Experts say that while the role of the rising seas in this collapse is still unclear, the integrity of buildings will be threatened by the advance of salty water that pushes up from below to weaken foundations. “When this building was designed 40 years ago the materials used would not have been as strong against salt water intrusion, which has the potential to corrode the concrete and steel of the foundations,” said Zhong-Ren Peng, professor and director of the University of Florida’s International Center for Adaptation Planning and Design. “Cracks in the concrete allows more sea water to get in, which causes further reactions and the spreading of cracks. If you don’t take care of it, that can cause a structure failure...”

Unprecedented Heat Wave in Pacific Northwest Driven by Climate Change. And there’s an apparent link between extreme heat and tropical cyclones in the western Pacific. Here’s a clip from an explainer at Scientific American: “…The roasting of the Pacific Northwest follows other June heat waves in the West. Between June 10 and June 15, high temperatures set records in parts of California, Arizona, New Mexico, Utah, Colorado, Wyoming and Montana, Tom Di Liberto, in NOAA’s Climate Program Office, wrote in a post on NOAA’s website. “It’s always difficult to immediately quantify how much impact climate change has had on a climate extreme, but there is plenty of evidence to show that high temperatures and heat waves have become worse due to climate change,” he wrote. “Heatwaves across the contiguous United States have occurred more often and lasted longer since the 1960s, which is consistent with a warming climate due to climate change...”

Northwest “Heat Dome” Shows How Climate Change is Causing Unprecedented Events. Axios explains the implications of what we’re seeing with greater frequency: “The dangerous heat wave enveloping the Pacific Northwest is shattering weather records by such large margins that it is making even climate scientists uneasy.

Why it matters: Infrastructure, including heating and cooling, is built according to expectations of a “normal” climate. Human-caused climate change is quickly redefining that normal, while dramatically raising the likelihood of events that simply have no precedent.

Earth is Trapping “Unprecedented” Amount of Heat, NASA Says. Details via The Guardian: “The Earth is trapping nearly twice as much heat as it did in 2005, according to new research, described as an “unprecedented” increase amid the climate crisis. Scientists from NASA, the US space agency, and the National Oceanic and Atmospheric Administration (NOAA), reported in a new study that Earth’s “energy imbalance approximately doubled” from 2005 to 2019. The increase was described as “alarming”. “Energy imbalance” refers to the difference between how much of the Sun’s “radiative energy” is absorbed by Earth’s atmosphere and surface, compared to how much “thermal infrared radiation” bounces back into space…”