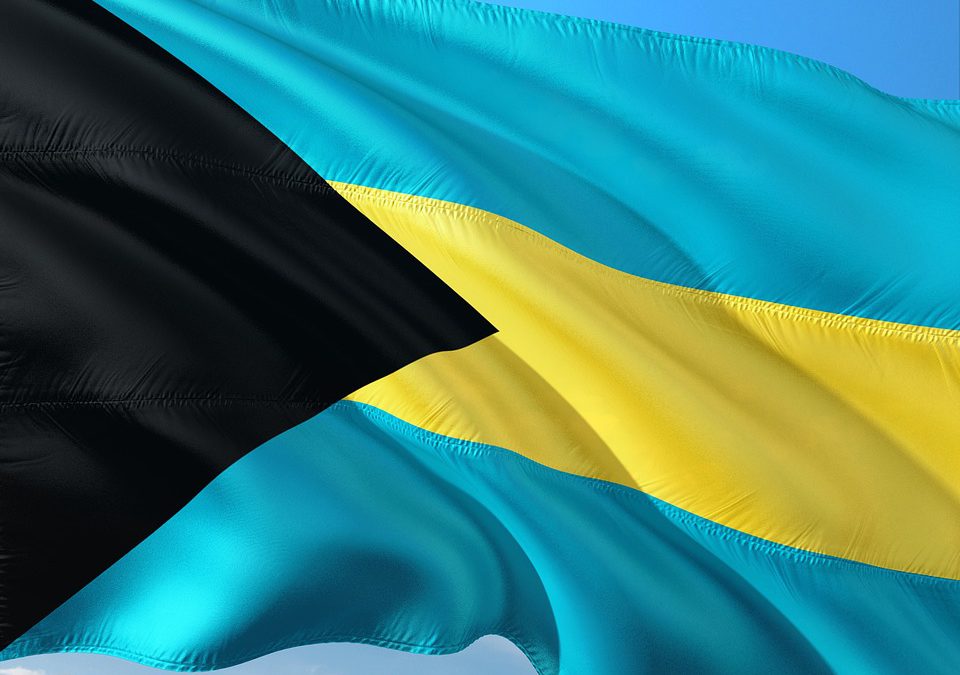 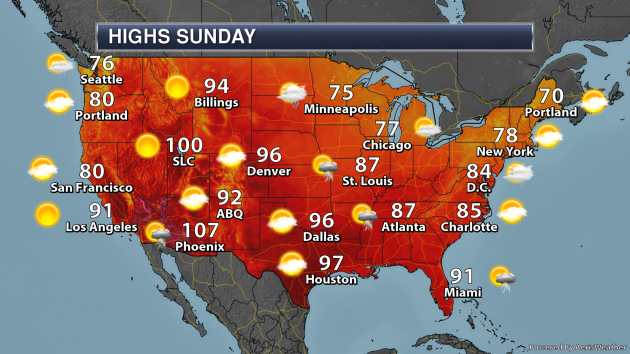 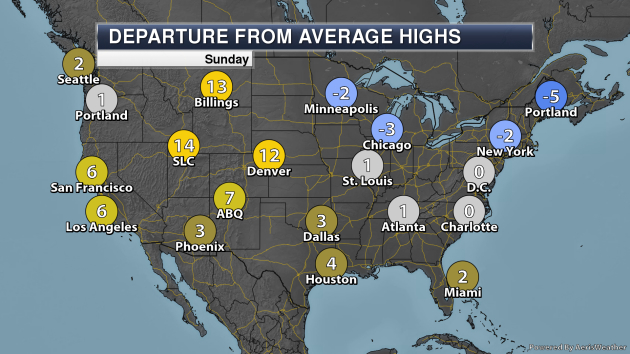 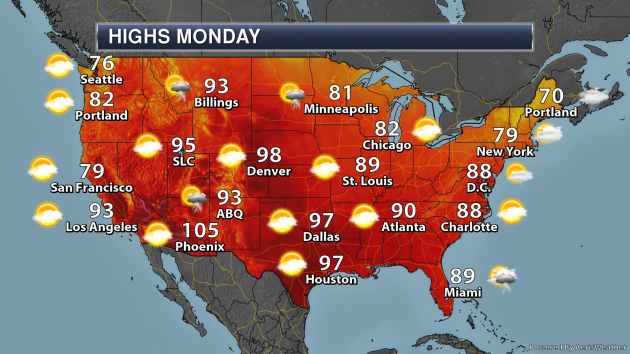 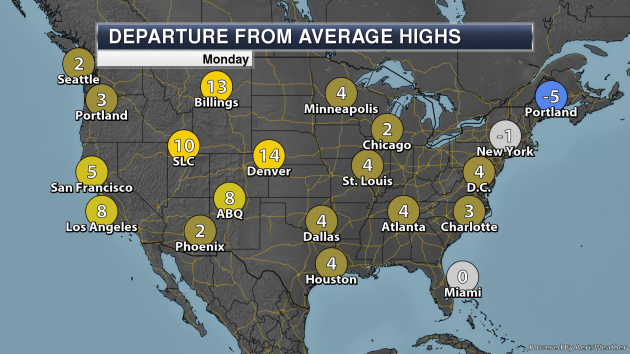 On Labor Day Monday, we’ll continue to watch Hurricane Dorian offshore of Florida, with showers and storms possible across portions of the Southeast. Showers and storms will also be possible in the Northeast and the upper Midwest. Another hot day will be in store across portions of the Rockies and the Great Basin, with highs again 10-15F above average. Record highs will be possible for areas like Denver and Cheyenne. 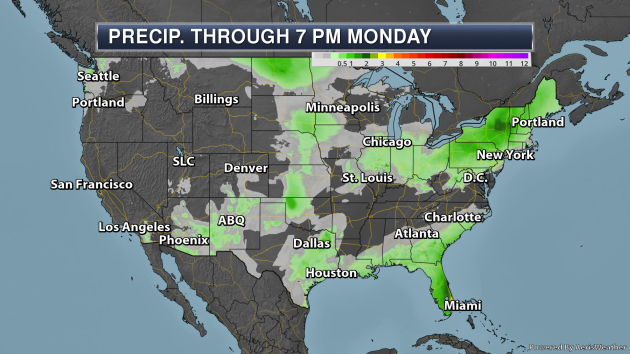 Some of the heaviest rain through 7 PM Monday will be across the Florida Peninsula, influenced by tropical moisture with Dorian nearby. Totals could top 3″ by this timeframe, especially around West Palm Beach. Rain amounts of at least 1-2″ will be possible across portions of New York and Vermont. 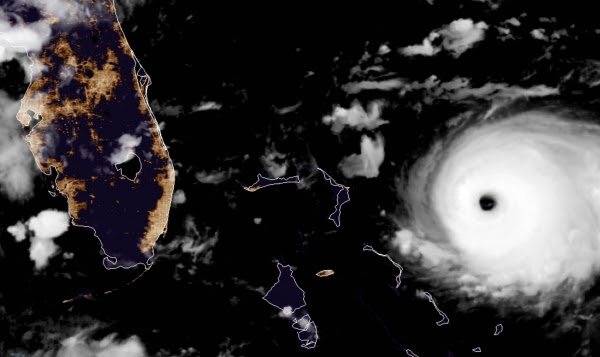 * Hurricane Dorian is a strong Category 4 storm with sustained winds of 150 mph, gusts to 185mph.

* The center of the storm is located 355 miles east of West Palm Beach, Florida – moving west at 8 mph.

* Nearly all models indicate that Dorian will stall off the east coast of Florida for the better part of 36 hours, before finally curving to the north and then northeast, on a track that is nearly parallel with the coastline of the southeastern USA.

* Potential for extreme destruction in the northern Bahamas, especially Freeport, where winds may exceed 120 mph for an extended period with 20-40″ of rain by Wednesday.

* Significant storm surge flooding is likely from the east coast of Florida to Georgia and South and North Carolina, especially around high tide. Tides are already running higher than normal due to astronomical forcings – sustained winds from Dorian will push water toward the coast, compounding flooding problems. In terms of severe impacts from winds, waves and flooding rains, coastal North Carolina is most threatened as of this hour, but the worst of storm won’t come until Thursday.

* Although a direct strike is unlikely in Florida (less than 1 in 5 chance) hurricane impacts will be significant, due to the slow forward motion and long duration of this storm. 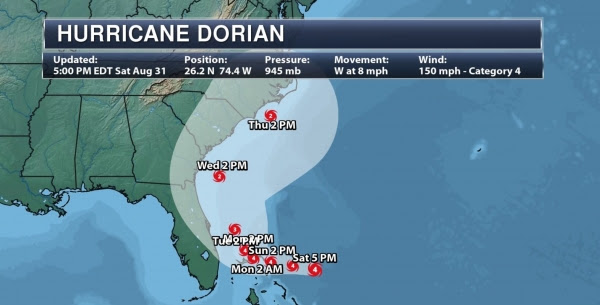 Dodging a Bullet? It would be wildly premature to lower our collective guard with Dorian. The storm is forecast to come perilously close to the Florida coast, which will experience tropical storm to Category 1 hurricane impacts (50-80 mph wind gusts Monday night into Tuesday). High tide flooding is likely in Jacksonville late Tuesday. Tuesday night into Wednesday will bring high tide surge flooding into Hilton Head and Charleston, South Carolina, with the worst impacts from surf, wind and rain reaching coastal North Carolina during the day Thursday. 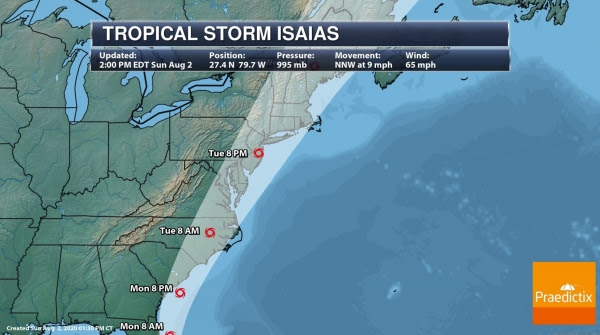 Spaghetti Plot. Nearly all weather models recurve Dorian to the north, and then northeast, avoiding a worst-case (direct strike) on the coastal USA. Confidence levels are moderate that Hurricane Dorian will stall, and then push north, avoiding a direct hit on Florida. There is still a potential for a direct strike on North Carolina – right now that is where the projected storm impacts appear to be the worst. 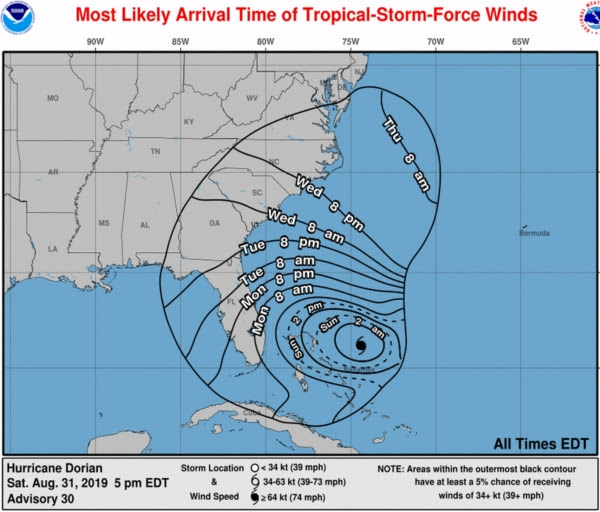 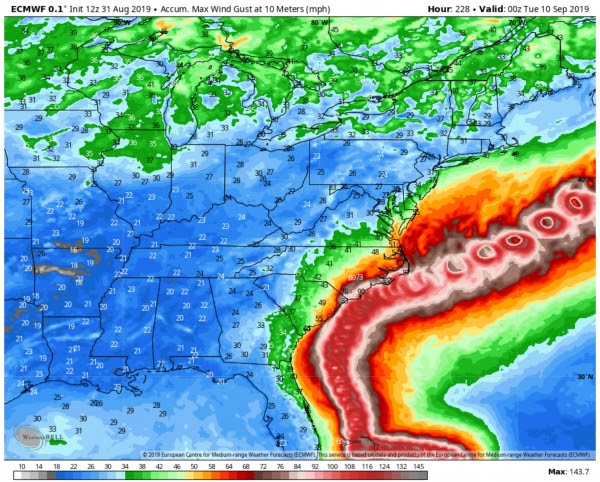 Strongest Winds Forecast to Remain Offshore. The map above is from ECMWF (European) guidance, showing the projected track of hurricane-force winds, remaining just off the coast, with the possible exception of coastal North Carolina – which may experience the most severe impacts from wind and surf by Wednesday. All models are in rough agreement that a turn to the north and then northeast will spare the southeastern coastline from a direct strike. 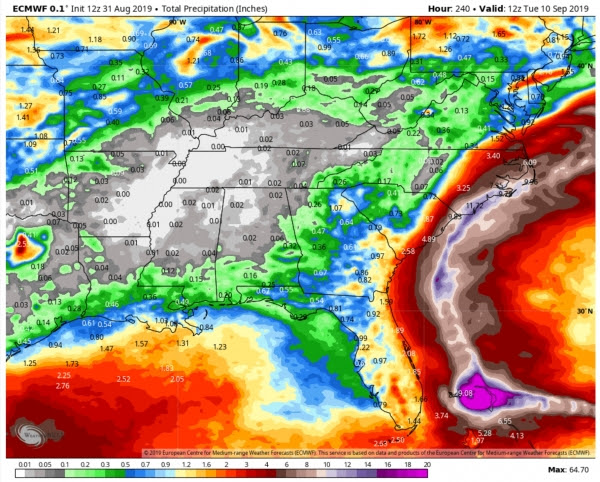 Projected Rainfall from Dorian. Models project over 10″ of rain for coastal North Carolina, from Wilmington to the Outer Banks, but the most extreme rainfall amounts will remain offshore.

Summary: Praedictix meteorologists are looking for model consensus and model trends when formulating these briefings. Our confidence level goes up when weather models agree (and most are in agreement that the worst impacts from Dorian will remain off the southeast coast). The trend is to stall the storm off the coast of Florida, then push it a little farther east over time, away from the USA.

That said, Dorian is an extremely dangerous storm, there will be coastal flooding from eastern Florida into the Carolinas, especially close to high tide. A 3-6 foot surge will inundate low-lying areas from Jupiter, Florida to Savannah, Charleston and Wilmington. We can’t let our collective guard down, but the good news is that the core of Dorian’s strongest winds will probably not track onto the U.S. mainland, with any luck avoiding a worst-case scenario.

That said, I want to emphasize that damage to the Bahamas will be extreme, possibly rivaling the kind of damage we witnessed in Puerto Rico and U.S. Virgin Islands from Maria.

More from the Washington Post: “The latest tools Marks and his team have been experimenting with include specialized drones that can fly around a hurricane’s eye and sophisticated plane-mounted radar units that can measure wind motion, all to better understand what happens inside the storm during intensification. Improving rapid intensification forecasts is important because of the danger it poses to coastal populations. “Forecasting rapid intensification is hard, and so many decisions on the emergency management side depend on that forecast,” said James Franklin, the former chief of forecast operations at the National Hurricane Center. “Emergency managers will evacuate different groups of people based on whether a hurricane is a Category 1 or a Category 3,” he said. The variables that create the conditions for rapid intensification have bedeviled scientists so far.”

More from phys.org: “Around 38,000 livestock depend on the waters of Lake Ngami in northern Botswana, but the animals—like the lake itself—have been stricken by a crippling drought. Grazers have to walk long distances in hopes of finding anything to eat. Some succumb to the heat and vultures can be seen feating on their corpses in the sludge of the lake bed. In May, President Mokgweetsi Masisi officially declared Botswana to be in drought after months of unevenly distributed rains, heat waves and dry spells. Rural households have been especially hit, and are looking to the government for help.”

‘A SIGNAL FROM CLIMATE CHANGE’: EUROPE HAS BECOME MUCH HOTTER THAN PREDICTED OVER THE LAST 70 YEARS

More from Newsweek: “Parts of Europe are warming faster than climate models have predicted, with the continent experiencing a spike in the number of days with extreme heat, scientists have said. According to a study published in the American Geophysical Union journal Geophysical Research Letters, the continent has experienced a series of “high-impact heat extremes,” over the past two decades as the world warms. A team of researchers led by Ruth Lorenz from the Swiss Federal Institute of Technology in Zurich, Switzerland, found that on average the number of days with extreme heat and heat stress—a measure combining temperature and humidity—in Europe more than tripled between 1950 and 2018, while extremely hot days have become warmer by 2.3 degrees Celsius (1.4 degrees Fahrenheit.)”