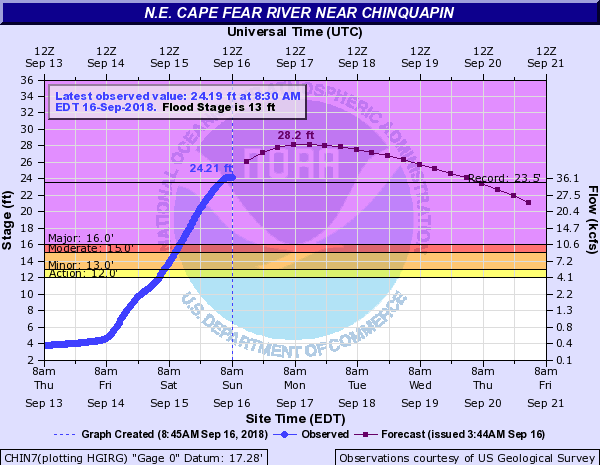 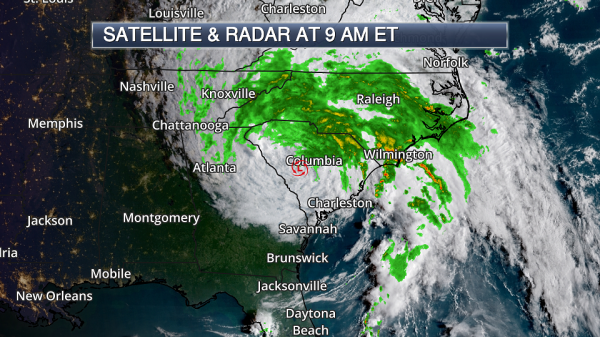 Florence As Of Sunday Morning. Florence has weakened into a Tropical Depression as of Sunday morning across South Carolina, but the system will remain a major flooding issue over the next several days. The good news is that it is gaining some forward speed this morning. As of the 5 AM ET update from the National Hurricane Center (NHC), Florence was moving to the west at 8 mph, sitting 20 miles southwest of Columbia, SC. Florence had sustained winds of 35 mph. 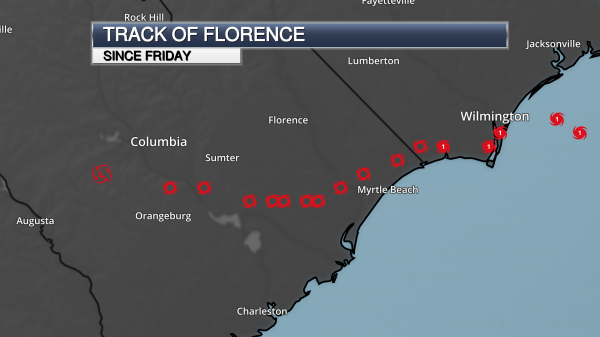 Slow Moving System. This graphic shows the position of Florence at each NHC update over the past several days. Florence has only moved approximately 230 miles from where it made landfall Friday morning to where it is this morning. This is why we have multiple rounds of heavy rain impacting the same areas, leading to extensive flooding across the region. 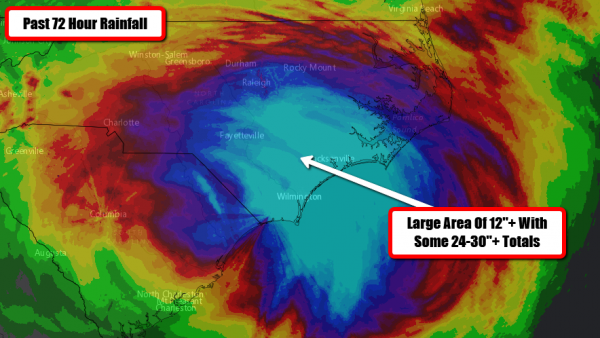 Over Two And A Half Feet Of Rain. Once of the most concerning aspects of Florence was the heavy rain threat. Florence has dumped over two feet of rain on parts of the Carolinas since Thursday, leading to the high impact event that is ongoing. Here’s a list of top rainfall totals so far from Florence:

If any of the top three rainfall reports from North Carolina verifies, Florence would hold the record for most rainfall from a tropical system for the state. That currently is held by Hurricane Floyd in 1999 which brought 24.06” near Southport. 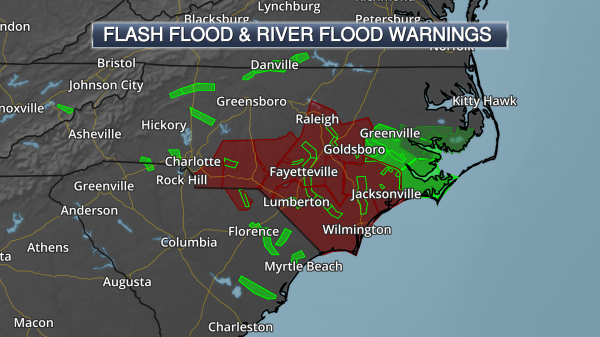 Ongoing Flash Flooding. Due to the extreme rain from Florence, numerous Flash Flood and River Flood Warnings continue to be in place across parts of the Carolinas this morning. A Flash Flood Emergency is also in effect for Sampson County in North Carolina until 9:45 AM. The statement from the National Weather Service said:

At 333 AM EDT, local law enforcement officials reported four high water rescues currently in Clinton and Turkey. Up to 20″ of rainfall has fallen since Hurricane Florence made landfall. Travel along Interstate 40 east of Interstate 95 all the way to the North Carolina coast is strongly discouraged. Flash flooding is occurring now!

Roads Closed Across The Region. Due to flooding (or even the potential of flooding) across the Carolinas, numerous roads have had to close. Authorities are asking people to stay off the roads and to avoid traveling through North Carolina. In North Carolina, I-95 from north of Fayetteville to U.S. 64 is closed as well as I-40 between Wilmington and I-95. Local DOT offices have the latest on road closures: 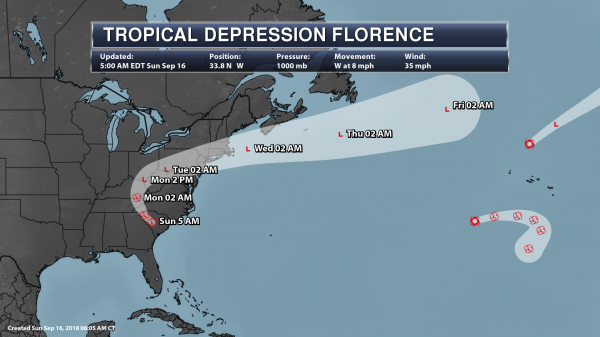 Florence Track. Florence is expected to gain forward speed today while turning to the northwest, eventually accelerating north and northeast early in the week. On this track, what is left of Florence will move across eastern Kentucky Monday and across parts of the Northeast Tuesday. The main threat with Florence through early in the week will be heavy rain. 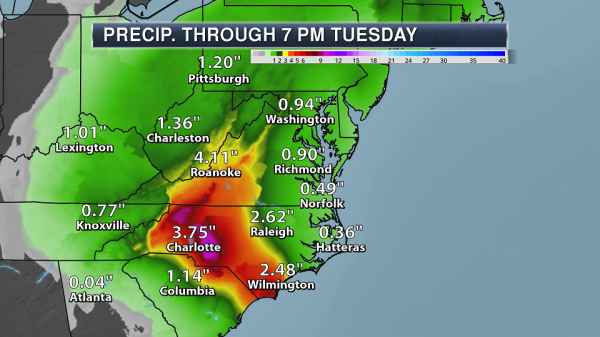 Additional Heavy Rain. Even though Florence continues to weaken, the heavy rain threat is not over. An additional 4-10” of rain is possible over the next couple days across parts of the Carolinas and Virginia, meaning some of the areas hardest hit in eastern North Carolina will see overall rain totals of 30-40”. This additional rain will cause new flash flooding and worsen ongoing flooding. Running down potential rainfall totals (via NHC):

West-central Virginia, north of Roanoke and west of Charlottesville… 2 to 4 inches, isolated 6 inches.  This rainfall will result in flash flooding and potentially lead to some river flooding. 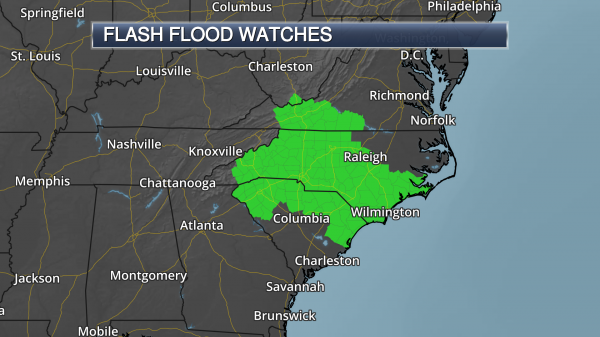 Flood Concerns. Numerous Flash Flood Watches remain in effect across parts of the Carolinas and Virginia due to the heavy rain potential associated with Florence. Devastating flooding will continue to be possible in these areas covered by Flash Flood Watches, including across western North Carolina into southern Virginia today and Monday. 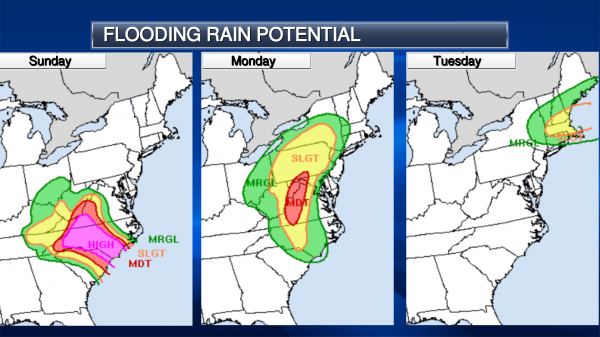 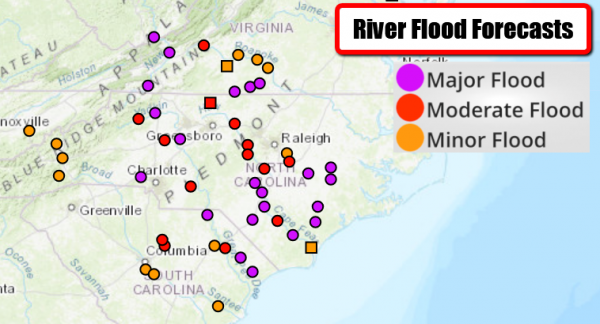 Record River Flooding Possible. Due to the extreme rainfall across the Carolinas and into parts of Virginia, major to extreme river flooding will continue be possible over the next several days. In some areas, this river flooding could rival Hurricane Matthew from 2016 or Hurricane Floyd from 1999. 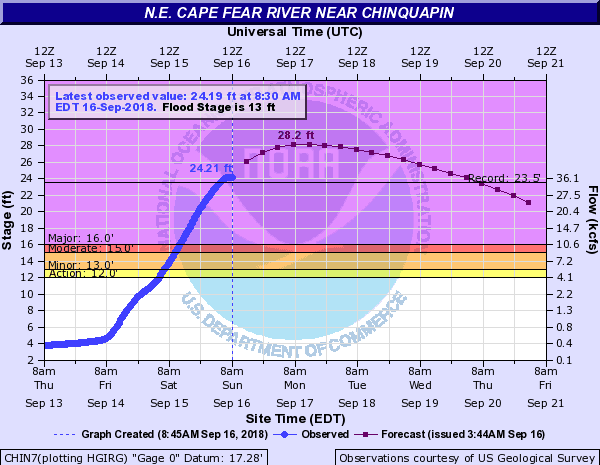 N.E. Cape Fear River near Chinquapin, NC. This is just one of the numerous rivers across the region that will see major flooding over the next several days. Earlier today the N.E. Cape Fear River near Chinquapin, NC, surpassed its all-time record set back in 1999 due to Hurricane Floyd. The river is expected to crest at 28.2 feet Monday, but it’ll take until Thursday to drop below the previous record level. That means that the river will remain in major flood stage through at least the end of the week. 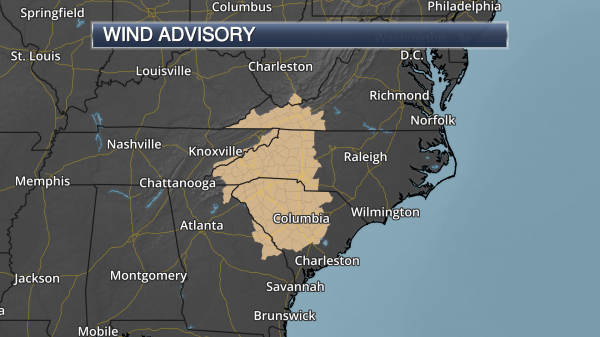 Wind Advisory. With what is left of Florence still situated over parts of the Mid-Atlantic, some gusty winds can still be expected from this system. At times winds could gust up to 50 mph. These strong winds, in combination with the wet soil, could help to bring trees down. Due to this, Wind Advisories are in effect through the evening hours. 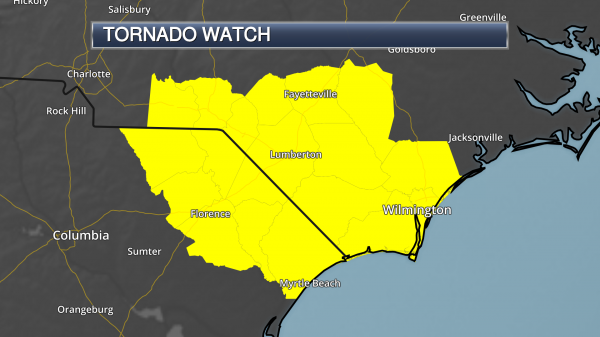 Tornado Watch. The potential of a few tornadoes will once again exist today across parts of North and South Carolina. A Tornado Watch has been issued until 5 PM for areas like Wilmington, Lumberton, and Fayetteville (NC) as well as Myrtle Beach and Florence (SC)