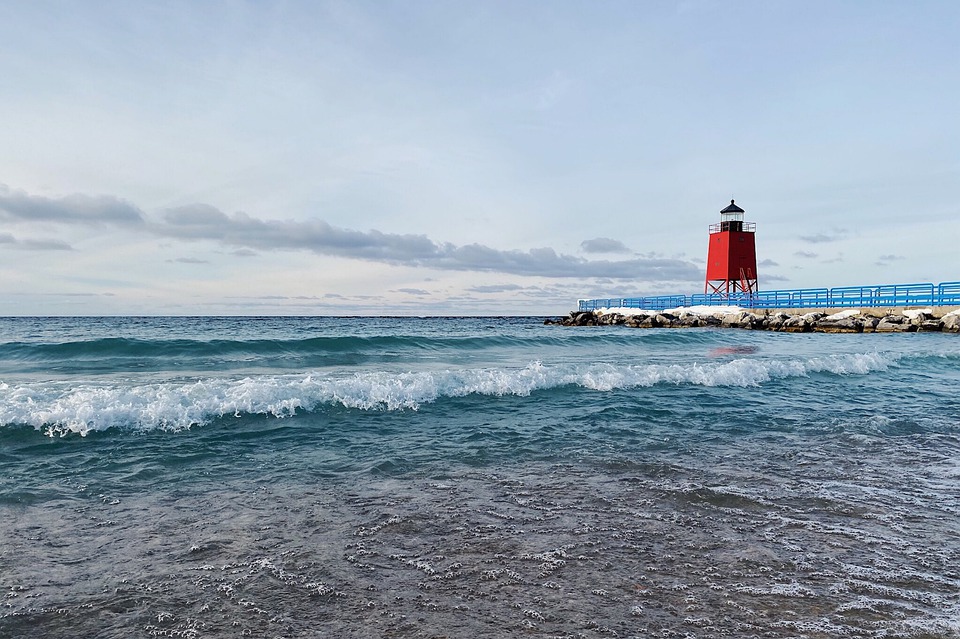 Great Lakes Climb Higher During The Month Of May 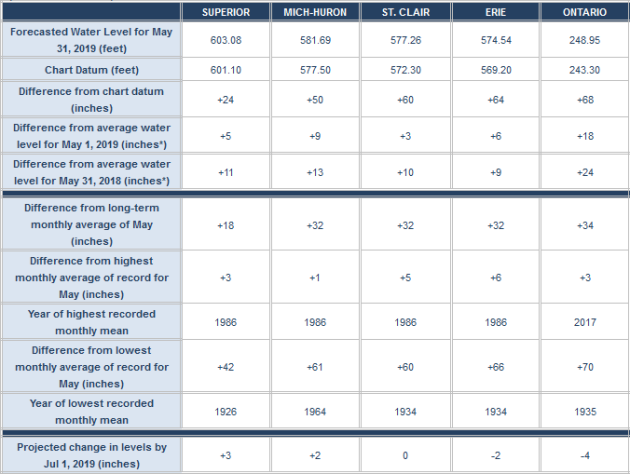 Data released on Friday from the U.S. Army Corps of Engineers Detroit District showed that all the Great Lakes climbed higher during the month of May due to heavy precipitation and snowmelt. More from the report: “Heavy precipitation and high flows have continued to contribute to rising lake levels. As compared to the beginning of the month, Lakes St. Clair, Superior, Erie, and Michigan-Huron have risen 3, 5, 6, and 9 inches, respectively. Lake Ontario has risen 18 inches since the beginning of May. All of the Great Lakes water levels are higher than one year ago at this time, ranging from 9 to 13 inches greater for Lakes Superior, Michigan-Huron, St. Clair, and Erie. Lake Ontario is highest above its level of last year at 24 inches above what it was one year ago today. Over the month of June, Lakes Superior and Michigan-Huron are expected to continue to rise, reaching 3 and 2 inches above their current levels, respectively. Lake St. Clair is predicted to be at the same level in once month, while Lake Erie and Ontario are expected to fall 2 inches and 4 inches, respectively. All lakes are currently above their record highs for the month of May, with Erie the highest above its record by 6 inches. Lakes St. Clair, Superior, Ontario, and Michigan-Huron are currently 5, 3, 3, and 1 inch above their record high May levels.” 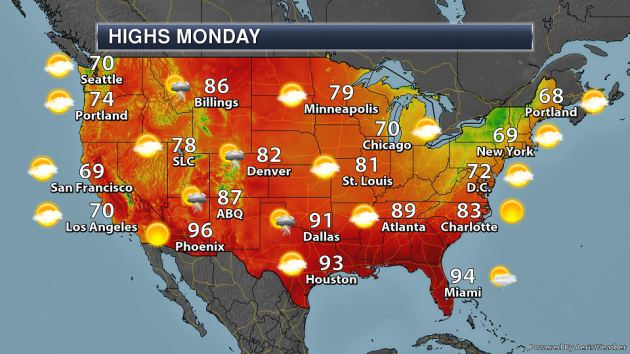 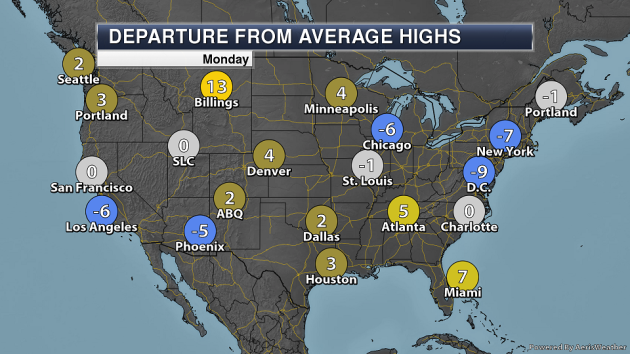 On Monday, an upper level low in the Southwest will continue to bring the threat of showers and storms across parts of the Central United States along with a frontal boundary draped across the region due to an area of low pressure in Canada. A few showers and storms will be possible in New England due a trough of low pressure, and rain will also be possible across parts of Florida. 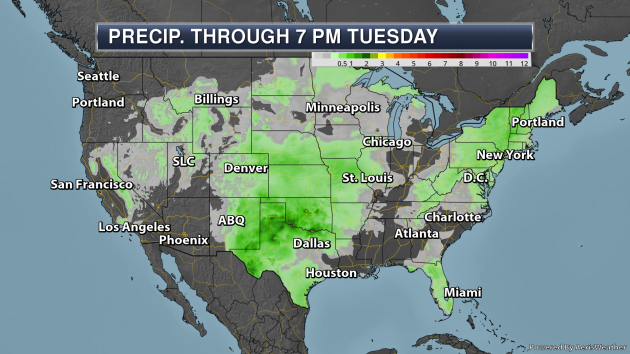 Through Tuesday evening, the heaviest rain across the lower 48 is expected to fall in parts of the Southern Plains, where up to 3″ will be possible in some locations. 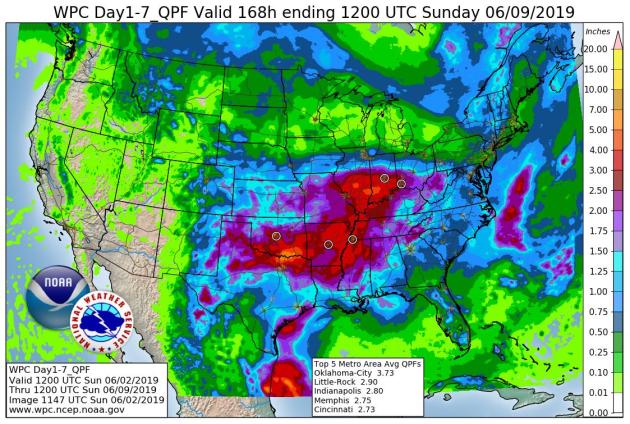 Unfortunately as we look over the next seven days, it appears more heavy rain will impact areas that have already seen heavy rain and river flooding recently. There’s the potential that parts of northern Texas and southern Oklahoma could see up to 8″ of rain by next Sunday. A lot of the rain in the central part of the nation will fall during the second half of the week, and these areas will need to be monitored closely for the potential of more flooding. 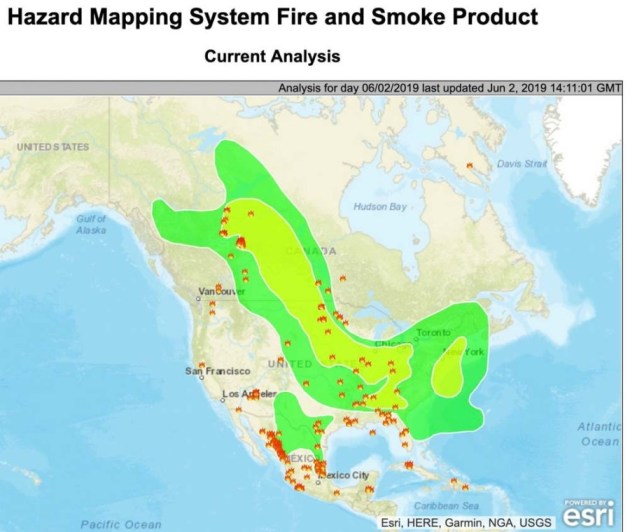 Caption from Wildfire Today: “The distribution of wildfire smoke at 8:11 a.m. MDT June 2, 2019. NOAA, Office of Satellite And Product Operations.”

More from Wildfire Today: “Smoke from wildfires in Alberta is still detectable across most of the Eastern United States today, but the Canadian government’s smoke forecast expects a significant decrease throughout the lower 48 states on Monday.  Cooler weather along with a slight chance of showers off and on in Alberta over the last several days has slowed the progress of the wildfires, including the 230,000-hectare (568,000-acre) Chuckegg Creek Fire at the town of High Level. Those conditions are expected to continue during this week, so it appears that U.S. residents will get a respite from polluted air that at times has been very unpleasant in the Northwest, especially along the Canadian border in Montana and Idaho.”

More from InsideClimate News: “The bodies started washing ashore on St. Paul Island, Alaska, in October 2016. One after another, the small carcasses of seabirds—mostly puffins—landed on the beach in extraordinary numbers.  The people of St. Paul Island, an Aleut community in the Bering Sea, are accustomed to seeing a lot of birds—millions stop there during their annual migrations. But they’re not used to seeing them like this. What was happening in October 2016 was the beginning of a mass die-off. Thousands of tufted puffins were dying for no apparent reason, except for maybe one: changes in the ecosystem due to climate change.  “There’s no way to avoid that something is going on here,” said Julia Parrish, a professor of ocean fishery sciences at the University of Washington and the executive director of the Coastal Observation and Seabird Survey Team (COASST). “The ocean is screaming.””

More from Climate News Network: “Almost a quarter of all the glaciers in West Antarctica have been pronounced “unstable”. This means, in the simplest terms, that they are losing ice to the ocean faster than they can gain it from falling snow.  In the last 25 years most of the largest flows have accelerated the loss of ice fivefold.  And in places some glaciers, including those known as Pine Island and Thwaites, have “thinned” by 122 metres. That means that the thickness of the ice between the surface and the bedrock over which glaciers flow has fallen by almost the height of the Great Pyramid of Cheops in Egypt, and far more than the Statue of Liberty in New York or the tower of Big Ben in London.”