HealthCast: Phenology at its Finest 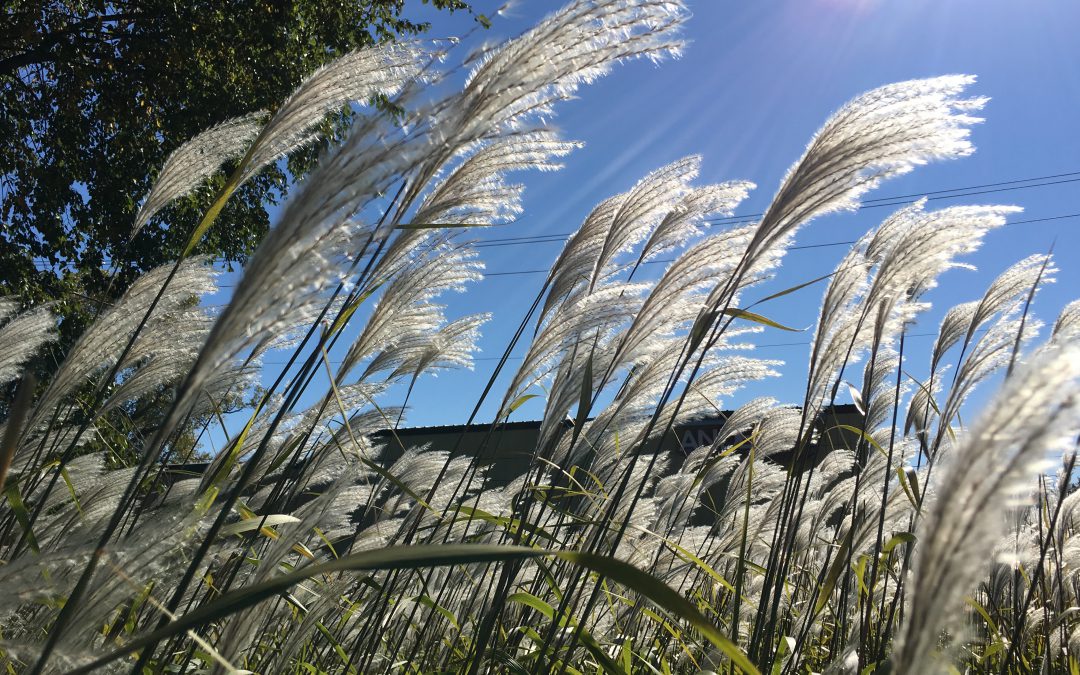 Ahh, spring. The season when everything comes alive. The birds chirp, the grass grows, and mammals (including humans!) come out of the woodwork after a long winter of hibernation.

Phenology is a fascinating field of study that tracks and documents the life cycle events of plants and animals. Think of the first time Canadian geese fly north in the spring in their distinctive flying V-formation. Those geese as well as other plants and animals are influenced by environmental changes, especially seasonal differences in temperature and precipitation steered by weather and climate.

The USA National Phenology Network collects phenological data all across the country. The network tracks the progress of various migrating birds as well as frost leaves on the ground, when the first Western Chorus Frogs are heard, and when the first dandelions, lilacs, and crabapples bloom along with a multitude of other natural observations that occur with the change of weather and climate.

A phenomenon known as “false spring” has become increasingly more common. A false spring occurs when unusually warm weather happens early in the season. Scientists largely agree that this false spring is occurring more often as a result of climate change.

The first sign of spring arrived on a cold, snowy morning in Minnesota in early March of 2018. Phenologists observed the first red-winged blackbirds of the season. This particular bird sighting came six days earlier than the median date.

Based on this and other similar observations of plants and animals the National Phenology Network concluded that spring 2018 was about a week ahead of normal. 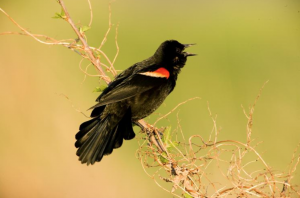 Climate data suggests that spring is getting warmer and arriving earlier than just a few decades ago. In the U.S. spring has warmed an average of 2F since 1970. The spring season is also coming an average of 3 days earlier. An earlier occurring and warmer spring has a ripple effect on the delicate life cycle events of plants, animals and also the economy. 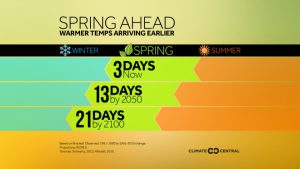 Spring leaf out (when the first green leaves start to appear on branches and bushes) will begin to appear an average of 21 days earlier by 2100 a recent study finds. As warmer springs cause plants to bloom earlier, migrating species tend to change their location. Hibernation may also be altered as they inherently depend on the seasonal increase in daylight and warmth that spring brings. 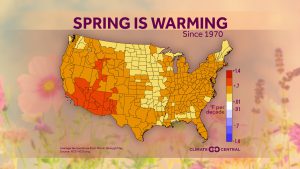 Warmer and an earlier onset of spring could also increase the seasonal insect populations. More insects may mean more damage to food crops.

The first blooms of spring may be pleasing to the eye but they are at a huge risk of damage from early spring freezes. Blooming flowers desperately dependant on pollination yet pollinators, like migrating birds and insects, may not arrive at the most opportune time for pollination.

These effects can threaten crop yields and impact food prices.

Sneezing a lot more in Spring than usual? The amount of pollen in the air has been increasing causing more allergy-induced asthma. In fact, by 2060 the pollen count could double! Earlier warming in spring combined with an overall warmer spring could help certain types of molds to thrive, thus making for a bad allergy season. 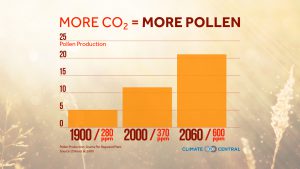 Phenology is and will continue to be an important aspect of understanding how weather and climate are changing. Computer models can only tell us so much, it takes eyes in the field and real-time observations to connect important evolutionary dots.