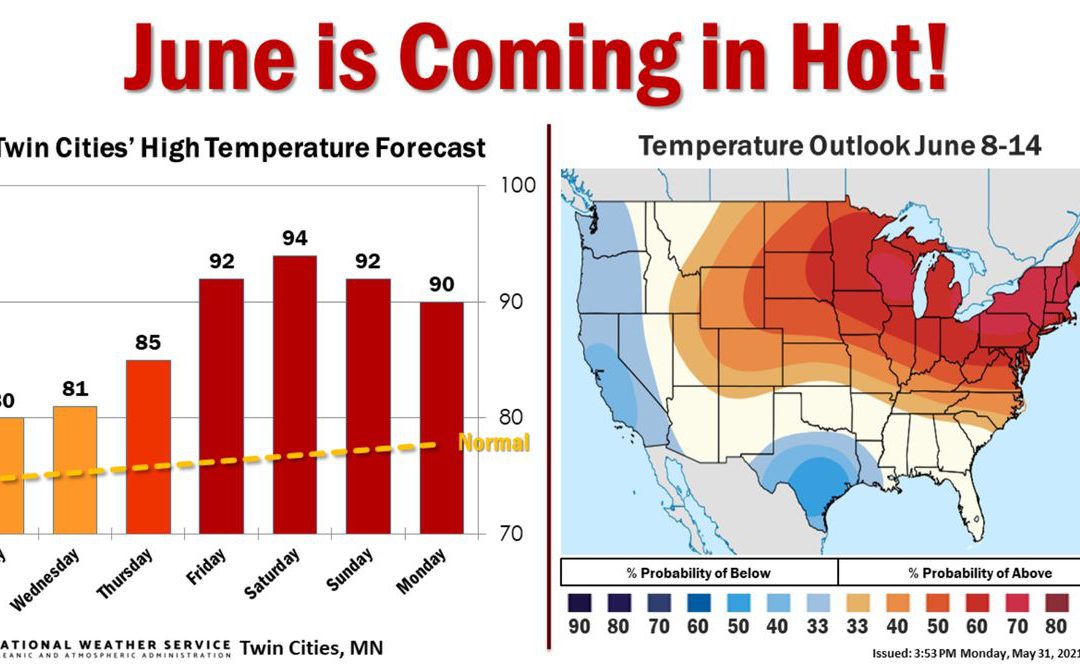 As holidays go this was a good one for meteorologists: two out of three days featured “thumbs-up weather”. I’m happy when people use their thumbs. No sad scowls from soggy toddlers or shunned indifference from weather-weary parents. Sunday was meh, but – in spite of a few lines of thunderstorms – the weather was better than average for a major holiday.

The big weather story is building heat this week with a good chance of 90 degrees by the weekend, possibly hotter. Summers are trending more humid with consistently higher dew points, and the heat index by Saturday may nearing 100F in some towns. Lovely.

May was 2-3 inches drier than normal over central and northern Minnesota, impacting water levels and soil moisture. A few T-storms may bubble up next week, but not the prolonged soaking much of the state needs right now. My spidey senses are still flashing hot and dry for the summer. We shall see.

130 cities from Arizona to Montana may set record highs this week. Sooner or later it’ll be our turn.

Heating Up. The strongest wave of southern heat we’ve seen yet this year will push northward as the week goes on, NOAA NDFD numbers (above) strongly hinting at 90 degree temperatures for much of Minnesota by the weekend.

Will The Canadian Model Verify? Something of an outlier, the GEM model from Environment Canada suggests mid to upper 90s over the weekend, which isn’t entirely out of the question. Not buying it (yet) but it’ll be interesting to see if GFS and ECMWF trend hotter as we get closer to peak heat.

Slow Simmer. June will be a hot month for most of the nation, a little relief predicted for the Pacific Northwest by mid-month, but most of the United States will be united in our need for air conditioning and large, cool bodies of water.

Hurricane Special: National Storm Surge Forecast Model Updated, Increases Time Needed in Case of Evacuation. CBS Miami has news of upgraded storm surge predictions coming for the 2021 hurricane season; here’s an excerpt: “…There are parts of southern Dade, a storm surge can push inland 10 to 15 miles. Certainly, penetrate Cutler Ridge, get into the areas and suburbs behind it,” said Rhome Such a threat like this calls for action by the NHC to have a more accurate forecasting tool. The storm surge unit has upgraded its forecast model in time for the 2021 hurricane season. This new upgrade will not only provide a more precise storm surge forecast but also increase evacuation times by 12 hours. “Which doesn’t seem like a lot but when it comes to evacuation decision making and the ability to pack your house and evacuate, 12 hours is an eternity,” said Rhome. The updated model will also help with eliminating unnecessary evacuations because as Rhome explains, “If you don’t have to evacuate you’re probably exposing yourself to greater risk by evacuating…”

How 5G May Improve Early Warnings of Severe Weather. The Wall Street Journal (paywall) has news of an interesting experiment, leveraging cellular technology: “In a small office across from a dry cleaner in Wake Forest, N.C., a team of engineers is exploring the possibility of using data found in 5G wireless signals to measure a key factor in the early detection of tornadoes. The group is part of a nonprofit test lab and engineering consulting firm called the Wireless Research Center, or WRC, which specializes in testing wireless technology and antennas. The team already has proved that humidity can be measured based on changes in signals that 4G and 5G cell towers emit. Now it wants to further test the technology to show that these same signals can help save lives by helping meteorologists forecast severe weather much sooner than current methods allow. Meteorologists typically use weather stations or satellites to measure humidity. Both methods have their limitations…”

June 1, 1993: St. Cloud records its latest ever freezing temperature, with a record low of 32.

Where Wind and Solar Power Need to Grow for America to Meet Its Goals. Here’s the intro to a timely post at The New York Times (paywall): “President Biden has promised to sharply reduce America’s planet-warming carbon emissions, which means changes to the country’s energy system may reshape landscapes and coastlines around the country. The United States is now aiming to bring emissions down to net-zero by 2050, meaning the country would eliminate as much greenhouse gas as it emits. To reach that goal, Americans will need to get a lot more of their energy from renewable sources like wind and solar farms. One of the most recent studies on the subject, Princeton University’s Net-Zero America Report, charted five pathways to net-zero, and all of them required the United States to exceed the current pace of building for solar panels and wind turbines…”