As another storm system moves into the central United States and Great Lakes during the middle of the week, we are anticipating another round of precipitation across the state. This one is coming with a warm surge of air, however, and it looks like most of the precipitation in the Twin Cities could be in the form of rain. The heaviest rain would be expected Wednesday into Wednesday Night across southern Minnesota. Meanwhile, some heavy snow will be possible with this system from Nebraska into the Dakotas, across the Red River Valley, into northwestern Minnesota. 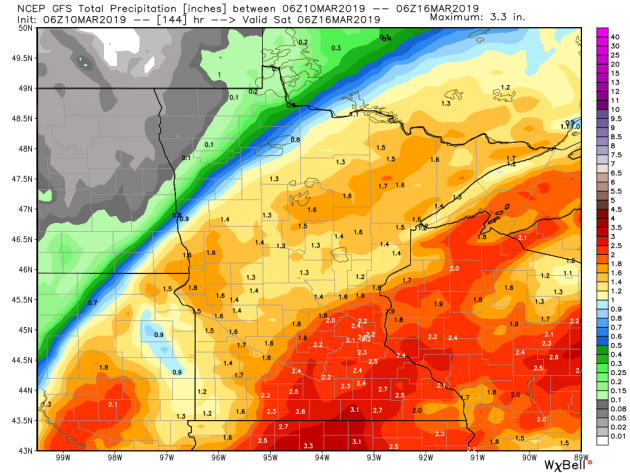 Looking at potential rainfall totals, at least 1-2″ of precipitation is possible in the mid-week time frame in the Twin Cities, with some of the heaviest falling Wednesday into Wednesday Night. Again enough warm air will be in place where this should mostly be in the form of rain, but some of the precipitation at the beginning and end of this storm could be in the form of a mix of rain and snow or just all snow. Maybe up to an inch or so of snow accumulation would be possible in the Twin Cities, mainly as precipitation ends Thursday Night into Friday.
One thing to note this week is the flood threat. Now is a good time to make sure any storm drains are cleared from snow and ice, otherwise with 1-2″ of rain possible this week along with additional melting snow some street and urban flooding would be possible. Small streams are also likely to see rises this week. 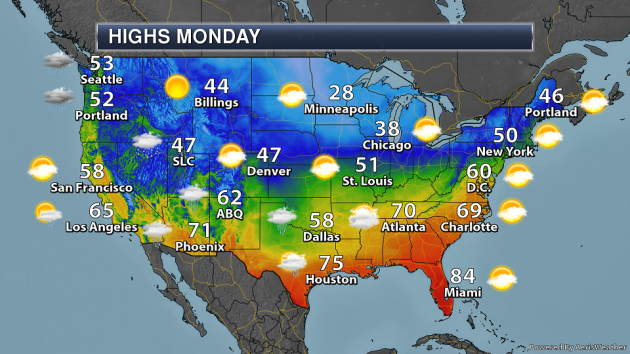 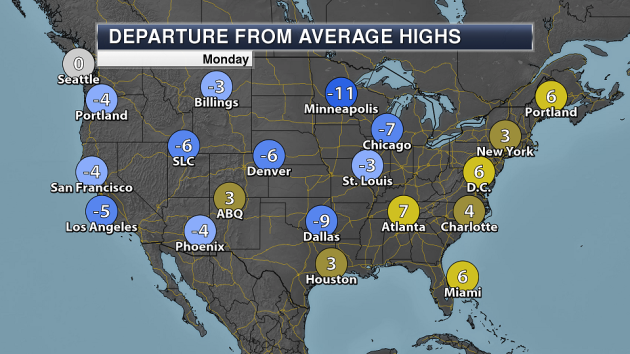 On Monday, a stalled out front will create showers and storms along the Gulf Coast to the South Central region. An area of low pressure will also allow some rain across the Desert Southwest. A few lake-enhanced snow showers will be possible in the Great Lakes. Meanwhile, a new front approaching the Pacific Northwest will cause rain and snow across the region. 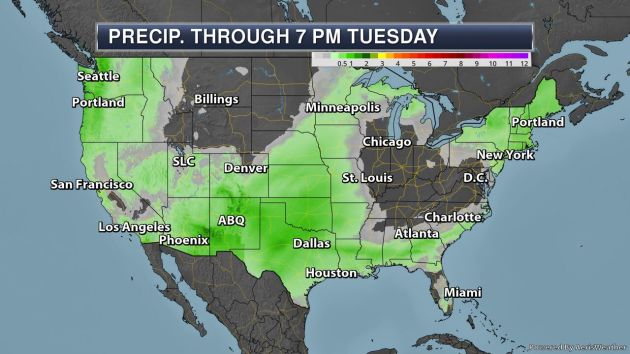 Through Tuesday evening, at least 1″ of precipitation will be possible in parts of the Pacific Northwest, the Southwest, and in the southern Plains.

Here’s a look at the expected seven-day precipitation across the lower 48 through next Sunday morning. A mid-week system will produce heavy rain from Texas into the upper Midwest as well as across parts of the Southeast, with the potential of at least 1.5-2″ of rain expected. 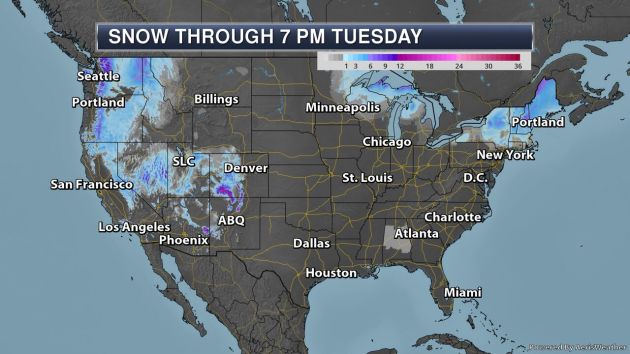 The heaviest snow through 7 PM Tuesday will be in some of the western mountain ranges, where at least a foot of snow will be possible in parts of the Cascades and Rockies.

California’s 2018 Was the Worst Ever Recorded for Wildfires

More from Earther: “California’s 2018 is officially the worst year for wildfires in recorded state history, the Los Angeles Times reported on Saturday, citing the National Interagency Coordination Center’s year-end statistical analysis. The 1.8 million acres of California land that burned last year was more than any other state in 2018, and it far surpassed 2017’s tally of 1.3 million acres in California. California Department of Forestry and Fire Protection spokesman Scott McLean confirmed to the Times that the wildfires were unprecedented.”

More from the Columbia Daily Tribune: “Hay and corn stunted by the harsh drought of 2018 are killing Missouri cattle.  A farmer in southwest Missouri laid out new forage for his herd of 70 cows and found 40 of them dead the next morning from nitrate poisoning, according to an MU Extension livestock specialist in Lawrence County.  University of Missouri scientists are aware of nearly 300 Missouri cows that have died from nitrate poisoning from drought-stunted forage this year. There haven’t been any cases in Cooper County that MU Extension livestock specialist Gene Schmitz is aware of, but that doesn’t mean it hasn’t happened or that it won’t in the future.”

‘A lot at stake’: indigenous and minorities sidelined on climate change fight

More from The Guardian: “Bernadette Demientieff, a representative for the indigenous Gwich’in nation, finds Washington DC anxiety-inducing, especially compared to the wide open spaces and tall mountains of Alaska.  She makes frequent trips to the US capital to fight oil drilling in what she considers sacred caribou calving grounds in the Arctic. But Demientieff is an outsider in the nation’s capital, where her concerns have fallen on deaf ears with the Trump administration. She’s also a bit of an outsider to the national environmental movement, too.”