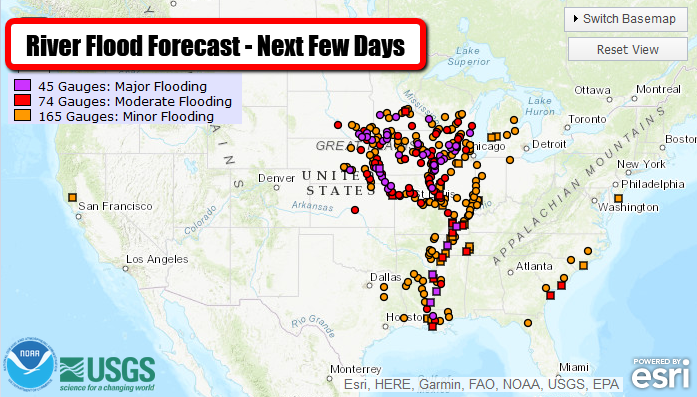 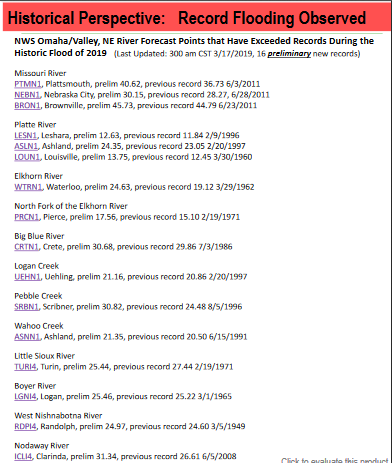 Thanks to the heavy rain and snowmelt over the past several days, major and historic flooding has occurred across parts of the central United States. According to NWS Omaha, at least 16 of their river forecast points have reached record levels over the past few days, including three locations along the Missouri River. 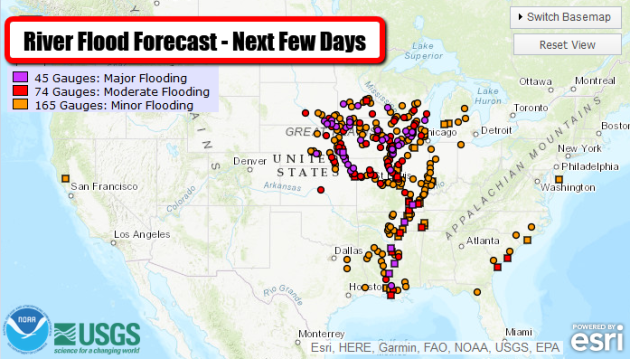 River flooding will continue to be an issue over the next several days across the central United States as water continues to flow downstream and more snowmelt occurs in the upper Midwest. 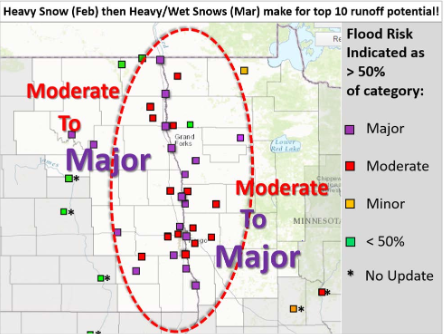 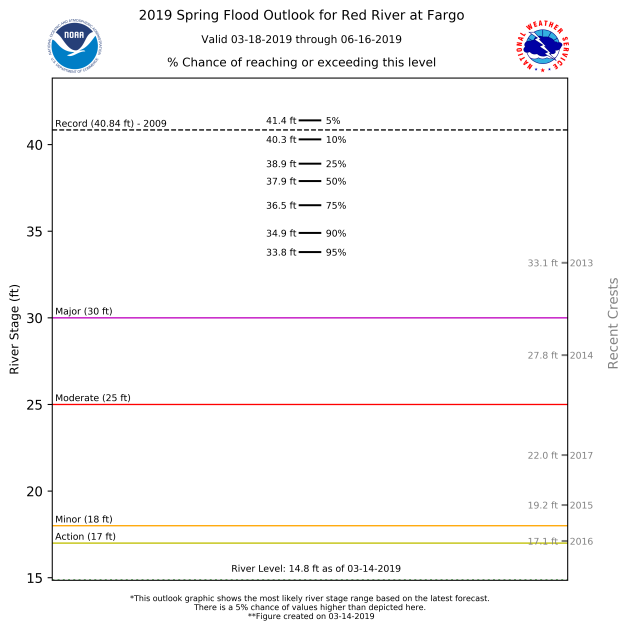 Here’s the current flood potential for the Red River in Fargo. There’s a 95% chance that the river reaches a level higher than it has been since 2013, but less than a 10% chance it reaches the record set in 2009. 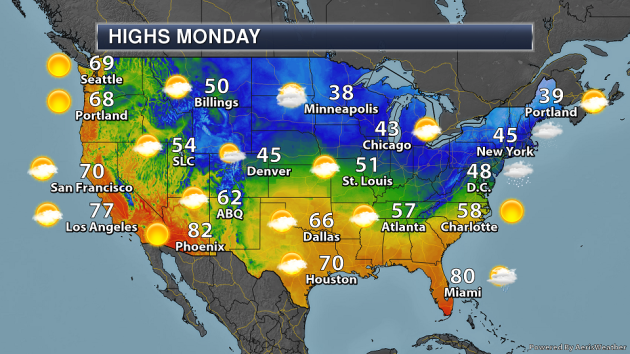 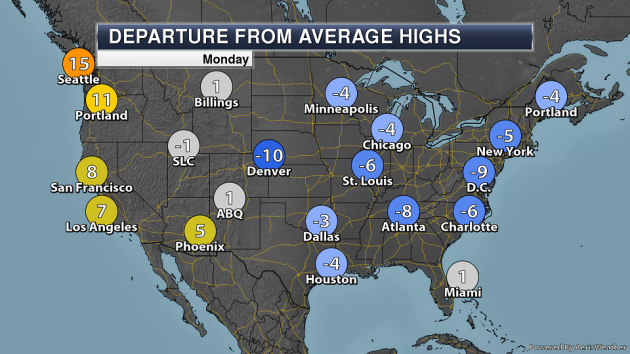 It’s going to be a fairly quiet Monday across much of the nation. An area of low pressure moving through the Mid-Atlantic will be enough for some rain and/or snow showers as far north as New York City. Some other scattered areas of snow will be possible in the Great Lakes region and around the Red River of the North. Showers and a few storms will occur across the Florida peninsula. Meanwhile, an area of low pressure will spark off a few rain/snow showers by the end of the day from Denver and Colorado Springs into Nebraska. Highs will be below average east of the Rockies, meanwhile highs will climb into the upper 60s in Seattle (WA) and Portland (OR). 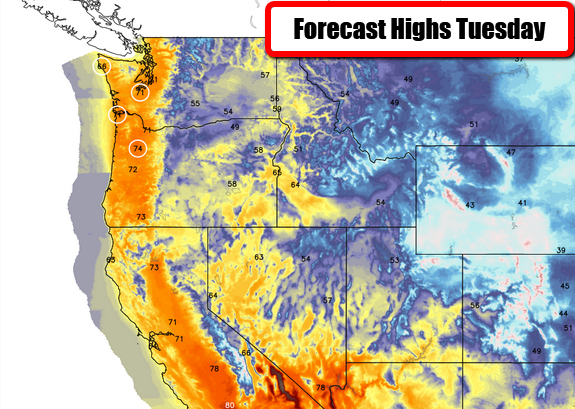 The warmth will continue in the Northwest Tuesday, with record highs possible in Olympia and Quillayute (WA), as well as Astoria and Salem (OR). 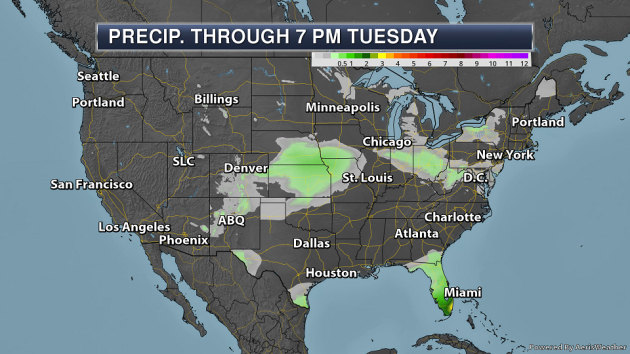 The heaviest rain through Tuesday evening will be across parts of southern Florida, where 1-3″ of rain could fall in the Miami and West Palm Beach areas. 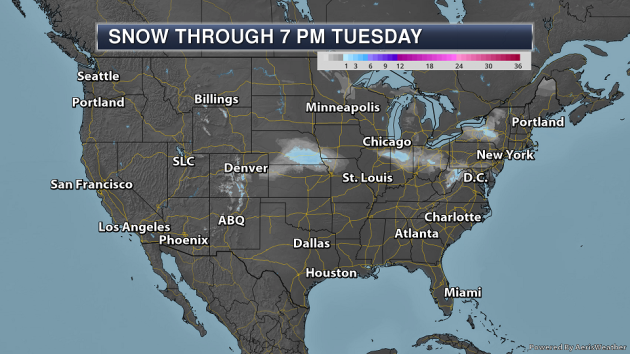 Through Tuesday evening, mainly light snow is expected in areas that will see the white stuff fall. In parts of southeastern Nebraska and parts of the Rockies it could add up to a couple inches.

More from Earther: “For the first time since 2011, the entire state of California is free of drought. The U.S. Drought Monitor released new information on the state’s drought levels Thursday. The entire state is drought free, although “abnormally dry” conditions persist in nearly 7 percent of the state, per the Drought Monitor. That’s quite a shift from even three months ago, when much of the state was in severe drought. Californians can thank all that record-breaking rain they’ve been getting. While multiple atmospheric rivers have led to some wild-ass floods and landslides, these rain events have also helped add water to the soil and built up the state’s snowpack. This winter was the wettest on record across the country—and the western U.S. definitely got more than its fair share.”

Tiny Costa Rica Has a Green New Deal, Too. It Matters for the Whole Planet.

More from the New York Times: “It’s a green big deal for a tiny sliver of a country. Costa Rica, population 5 million, wants to wean itself from fossil fuels by 2050, and the chief evangelist of the idea is a 38-year-old urban planner named Claudia Dobles who also happens to be the first lady. Every country will have to aspire to something similar, scientists say, if the world is to avert the most dire consequences of global warming. And while Costa Rica’s carbon footprint is tiny compared to other countries, Ms. Dobles has a higher goal in mind: Getting rid of fossil fuels would show the world that a small country can be a leader on an awesome problem and improve the health and well-being of its citizens in the bargain. It would, she said, combat a “sense of negativity and chaos” in the face of global warming. “We need to start providing answers.””

More from InsideClimate News: “For two years, the Trump administration has been planting seeds of change in the Environmental Protection Agency—installing allies of regulated industries onto its elite panels of science advisers. That effort now has borne fruit in dramatic fashion. The EPA’s new science advisers, sweeping aside decades of research on the grave health risks of fine particle air pollution, have launched a drive to force the agency to give greater weight to a handful of contrarian studies that dispute the harmful effects of soot. Particulate matter is the pollution caused by combustion, a mixture of solid and liquid droplets that forms in the burning of fossil fuels or wood. The health risks of particulate matter have been an underpinning of the EPA’s cost-benefit analysis of a number of air pollution regulations, including those meant to address climate change, like the Obama administration’s Clean Air Act.”