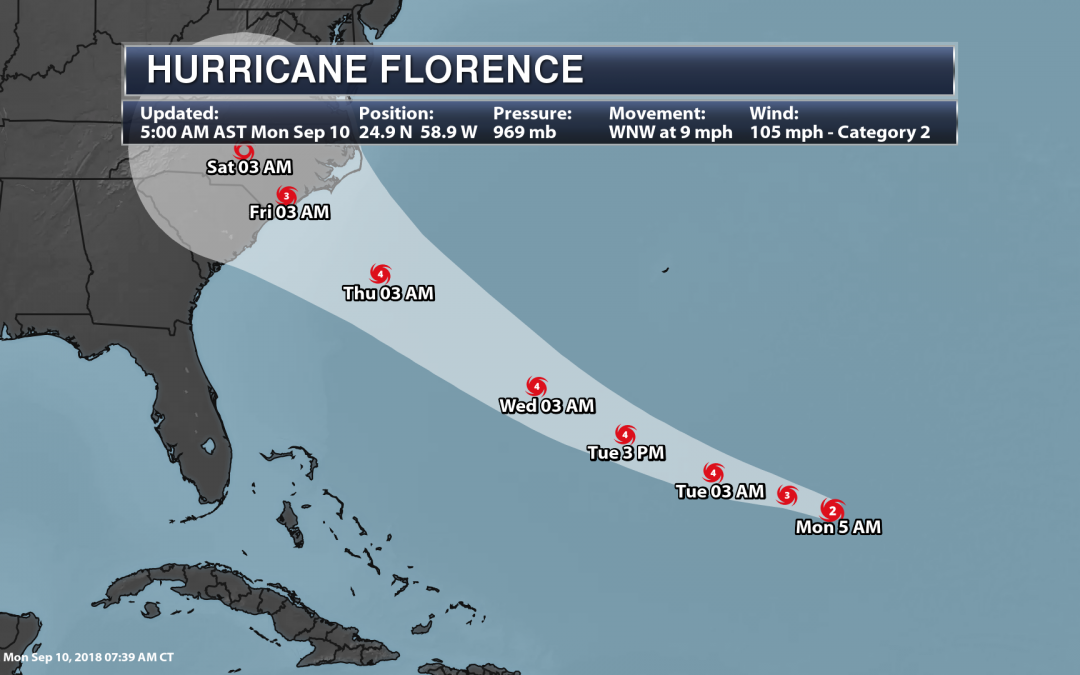 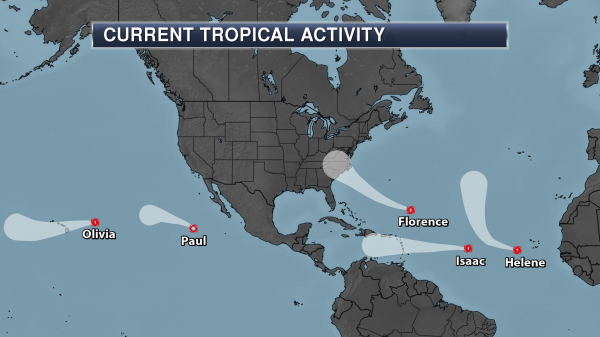 Busy In The Tropics. The average peak of the Atlantic hurricane season is September 10th (today), and the tropics are certainly active. In the Atlantic, we have Florence, Helene, and Isaac, with Olivia and Paul in the central/Eastern Pacific. Quickly looking at these systems: 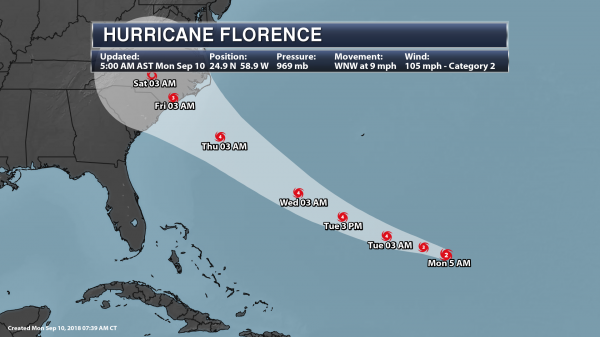 Tracking Florence. Florence is quickly strengthening across the west-central Atlantic this morning. As of the 5 AM AST update from the National Hurricane Center, Florence was a Category 2 hurricane with wind speeds of 105 mph. The storm was located 625 miles southeast of Bermuda and was moving to the west-northwest at 9 mph. Florence will continue to strengthen into a major hurricane (Category 3 or higher) later today, and then into a Category 4 hurricane tonight. This system will reach peak wind speeds of 150 mph Wednesday before some slow weakening occurs as it approaches the East Coast. However, Florence is expected to remain a major hurricane through landfall late Thursday, which at the moment is expected to occur around the North Carolina/South Carolina border. Florence is then expected to quickly lose forward speed across the Eastern United States late this week and into the weekend, potentially leading to a very heavy rain event in the Mid-Atlantic from this system

It is important to not focus directly on the exact location of landfall, though, as the exact path is still uncertain this far out. Anywhere within the cone of uncertainty – extending across North and South Carolina – can expect impacts from this system which will include storm surge at the coast, inland heavy rain and flooding, and damaging winds topping hurricane force. Facilities along the East Coast – especially across the Carolinas and Mid-Atlantic – should make sure their contingency/hurricane plans are in place. Conditions are likely to worsen across this region as we head into Wednesday night and Thursday. 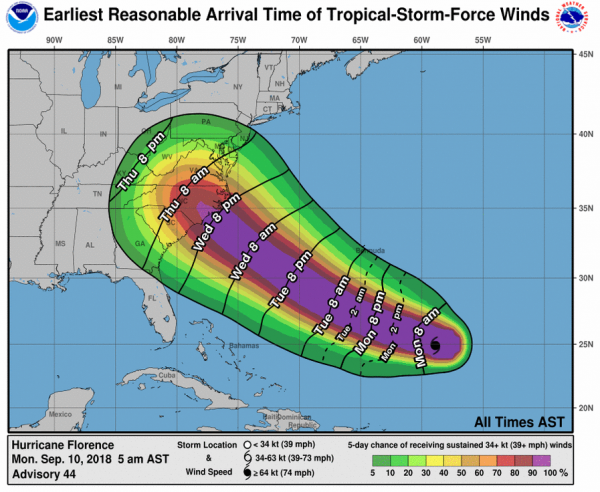 Potential Earliest Tropical Storm Force Winds. Tropical storm force winds will approach the East Coast by Wednesday evening, with stronger winds following Thursday into Thursday Night. By this time frame, most preparations should be completed, as these winds will impact any last minute preparations. As winds increase across the region where Florence approaches the coast, power outages and downed trees will be likely. 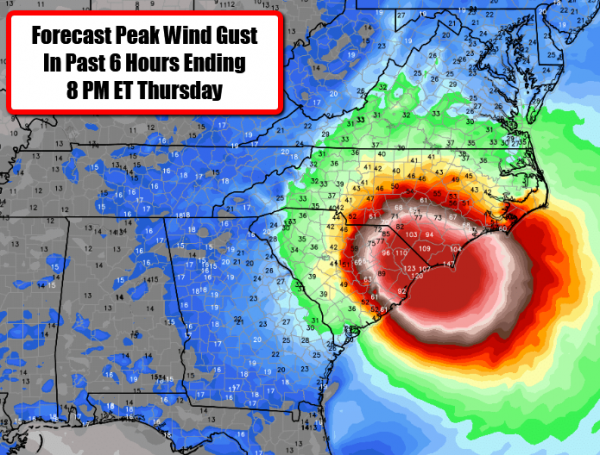 Category 3+ Wind Gusts Possible At Landfall. Major hurricane wind gusts can be expected in and around the area of landfall Thursday evening. According to this model, winds of over 100 mph may be possible for areas like Wilmington, Jacksonville, and Elizabethtown (NC) and Myrtle Beach (SC). These winds would be capable of knocking out power to the region, as well as downing trees and power lines. 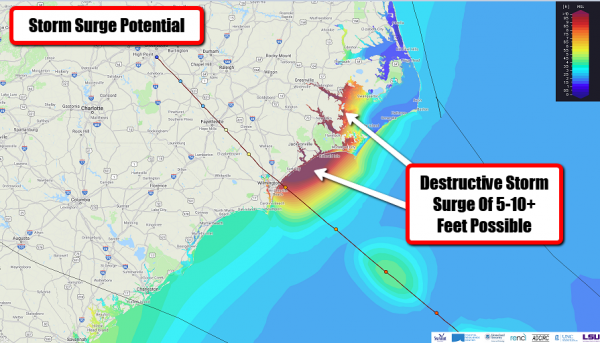 Storm Surge Potential. As Florence approaches the coast Thursday, a destructive storm surge will be possible. Storm surge flooding occurs when rising waters move inland, causing normally dry areas to be flooded. Models are indicating the potential of a 5-10+ foot storm surge along parts of the North Carolina coast, particularly in areas from Wilmington to Morehead City, New Bern, and Bath. 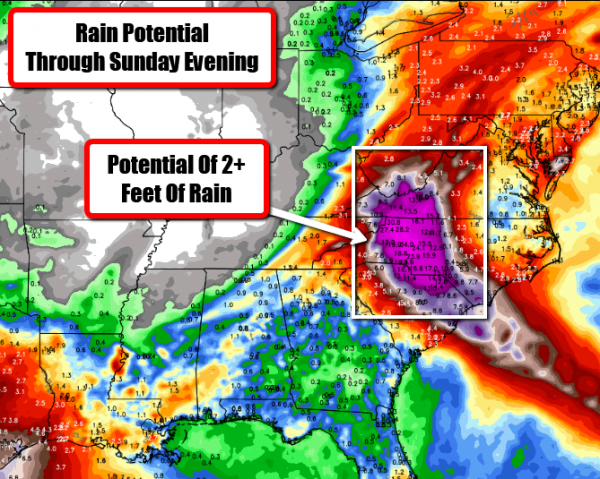 Heavy Rain Impact. Florence is expected to produce heavy rain along the coast as well as inland, especially as the system slows down toward the end of the week and the weekend. In some areas, this rain could last for days if this system does stall out as some models are showing. One other thing to note is that terrain may enhance the potential of heavy rainfall across this region into the weekend. Rainfall totals of one to two feet may be possible in the most concentrated areas of heavy rain inland, which could cause disastrous flooding. 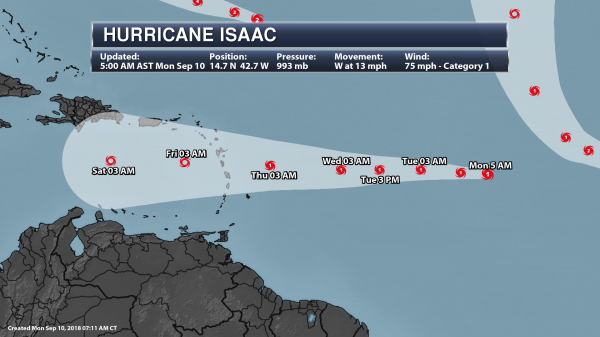 Tracking Isaac. Isaac is now a hurricane as of Monday morning in the central Atlantic, continuing to move westward. Some additional strengthening is possible over the next couple days, with the forecast showing a peak intensity of 90 mph winds about 36-48 hours from now. After that, slow weakening should start to occur. Isaac should move across the Lesser Antilles Thursday at or near hurricane intensity. However, with Isaac being a small hurricane, there is uncertainty in the overall forecast of the system. 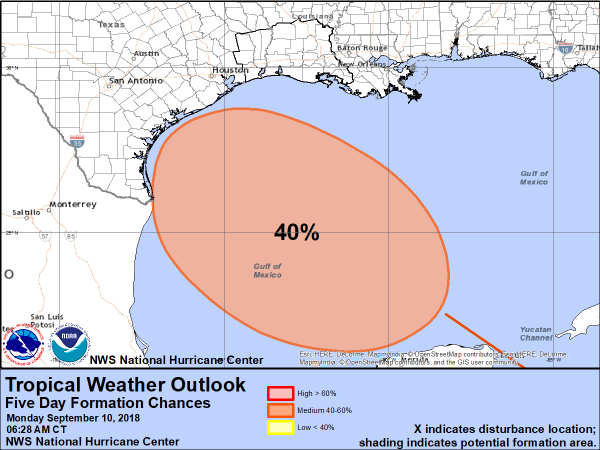 Potential Formation In The Gulf? There is also an area in the Caribbean that we will have to watch closely as it moves into the Gulf of Mexico later this week. There is about a 40% chance that a tropical depression could form in the Gulf of Mexico over the next five days. 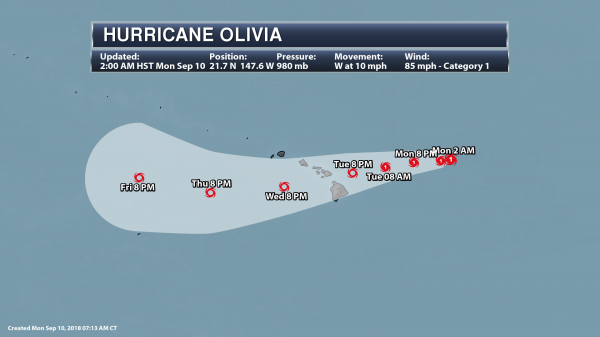 Tracking Olivia. Out in the Central Pacific, Olivia continues to move west this morning and has strengthened a little. As of the 2 AM HST update, Olivia had sustained winds of 85 mph and was moving to the west at 10 mph. The center of the storm was located 500 miles east-northeast of Hilo. This system will start to move more to the west-southwest later today, moving across the Hawaii Islands TuesdayNight or Wednesday. Little change in strength is expected today, but Olivia should start to weaken again Tuesday. It is currently expected that Olivia will still be a strong tropical storm as it moves over Hawaii, with forecast wind speeds of 70 mph Tuesday evening and 50 mph Wednesday evening. 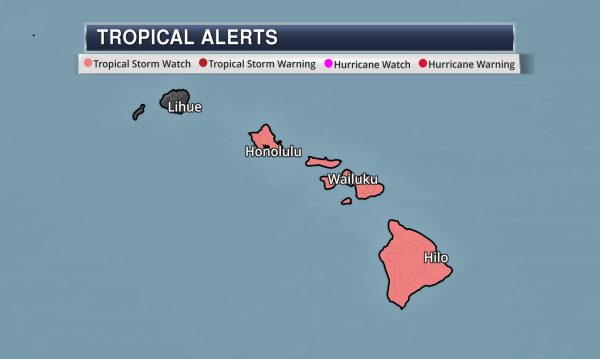 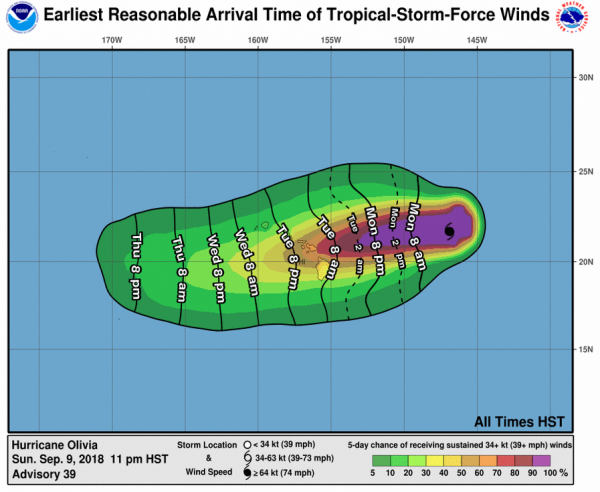 Potential Earliest Tropical Storm Force Winds. As Olivia tracks closer to Hawaii over the next couple days, tropical storm force winds could be felt as soon as Tuesday across the islands. These winds would start to disrupt preparations ahead of the storm.

Olivia Potential Wind Gusts. Some of the strongest wind gusts across the Hawaiian Islands are expected Tuesday night into Wednesday, with gusts topping 50 mph possible in Honolulu late TuesdayNight into the day Wednesday. Winds will start to decrease across the islands by Wednesday Night as Olivia continues to push to the southeast. 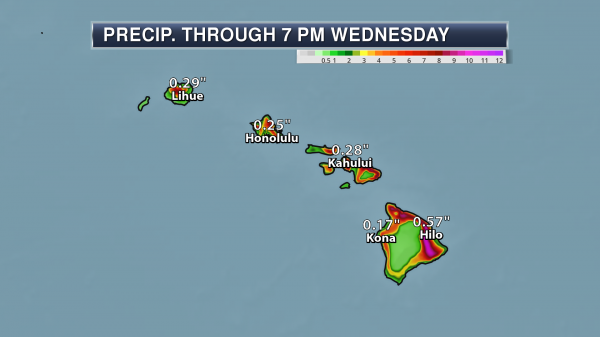 Rainfall Potential. The potential exists for 10-20” of rain, especially in windward sides of Maui and the Big Island. This heavy rain could cause flash flooding across this region. 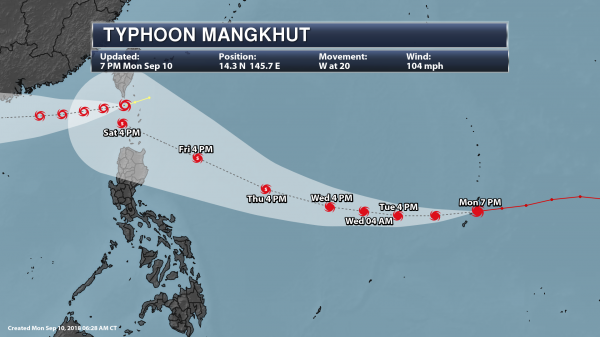 Tracking Mangkhut. Further out into the Pacific, Typhoon Mangkhut continues to intensify as it moves through the Mariana Islands and Guam. As of the 7 PM local time update, Mangkhut was located about 15 miles west of Rota or 50 miles north-northeast of Guam and was moving to the west at 20 mph with 105 mph winds. In Guam, a wind gust of 87 mph was observed at Andersen AFB with a 74 mph gust at the Guam International Airport. Typhoon to near-typhoon winds are expected to continue through Tuesday morning across Guam and the Mariana Islands as Mangkhut continues to move westward. Mangkhut is expected to become a Super Typhoon (winds of at least 150 mph) Thursday, and it could be a threat to Southeast Asia, including Taiwan, heading late in the week into the weekend.