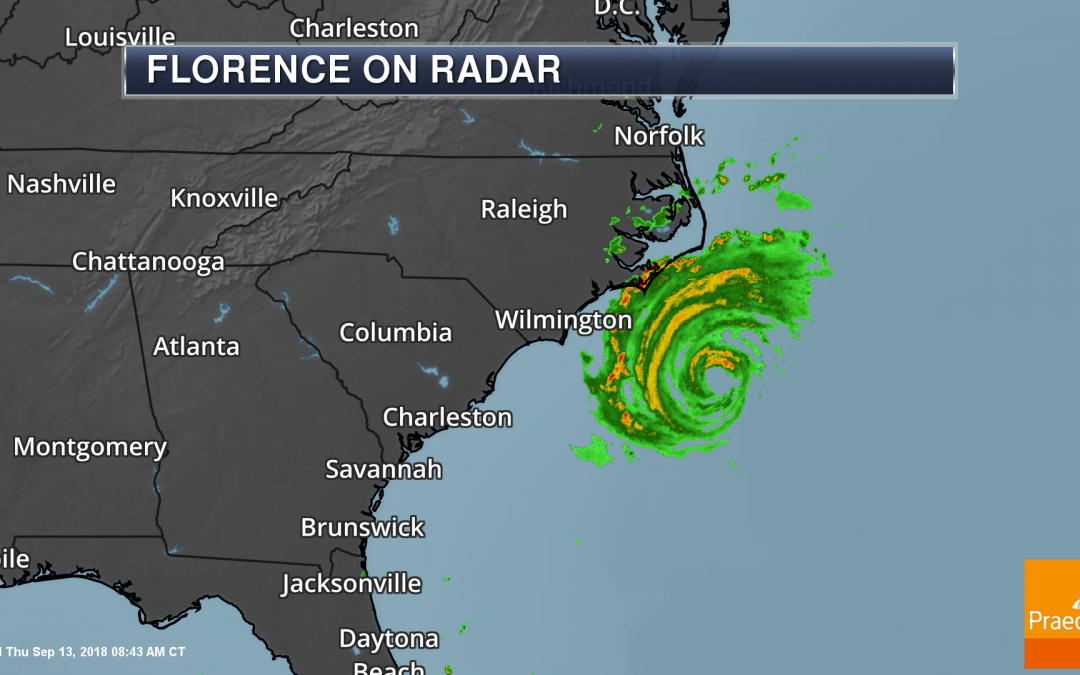 In light of the risk Florence poses to the U.S., we’re publicly releasing our morning briefings on our blog. Check back daily for more updates. We are also providing a small sampling of our tropical weather graphics as we continue to track Hurricane Florence in the Atlantic. 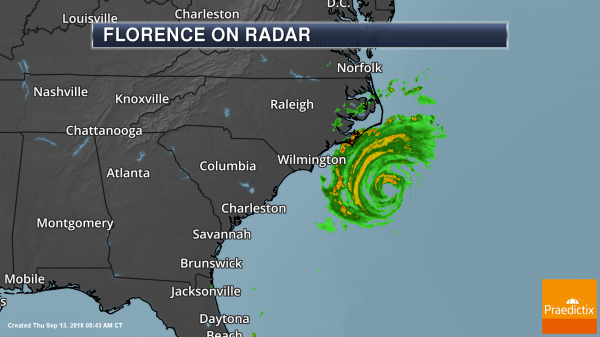 Hurricane Florence As Of Thursday Morning. Outer rain bands with tropical-storm-force wind gusts are starting to impact the North Carolina Outer Banks this morning as Florence nears the East Coast. As of a 9 AM EDT special update from the National Hurricane Center, Florence was located 170 miles east-southeast of Wilmington, NC, or 215 miles east of Myrtle Beach, SC, and moving to the northwest at 12 mph. Florence had winds of 110 mph. Even though Florence is slightly weaker this morning, dangerous impacts are still expected over the next several days across the Mid-Atlantic.

Numerous mandatory evacuations continue to be in effect across the Mid-Atlantic ahead of Florence, with almost two million told to leave the area. State emergency management offices have more on how states are preparing for the storm and what areas are under evacuations: 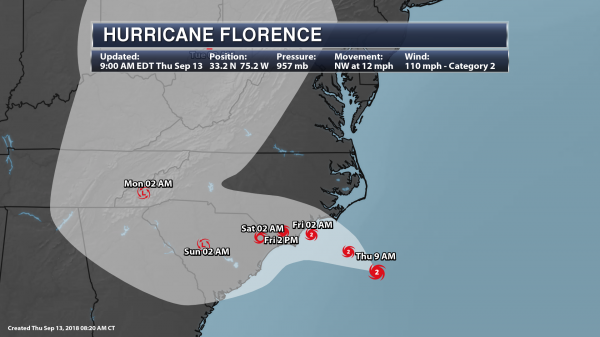 Forecast Track. Florence will continue to track in a northwest direction today with a decrease in forward speed. This system will then turn to the west-northwest tonight and Friday, and then west-southwest Friday night into Saturday with a fairly slow forward speed. Florence will approach the Mid-Atlantic coast today, then slowly move inland tonight or Friday. This system will continue to move across South Carolina this weekend, weakening while doing so. With Florence slowly approaching the coast and moving inland over the next couple days, a prolonged storm surge event is expected along the East Coast, with several high tide cycles potentially impacted. Several days of heavy rain will occur along and near the coast, with catastrophic flash flood possible as well.

Facilities along the East Coast – especially across the Carolinas and Mid-Atlantic – should make sure contingency/hurricane plans are rushed to completion as conditions will deteriorate throughout the day.

Local Weather Service Offices have issued statements on what to expect from Florence – you can find those here: https://www.nhc.noaa.gov/text/refresh/index_hls1+shtml/111230.shtml 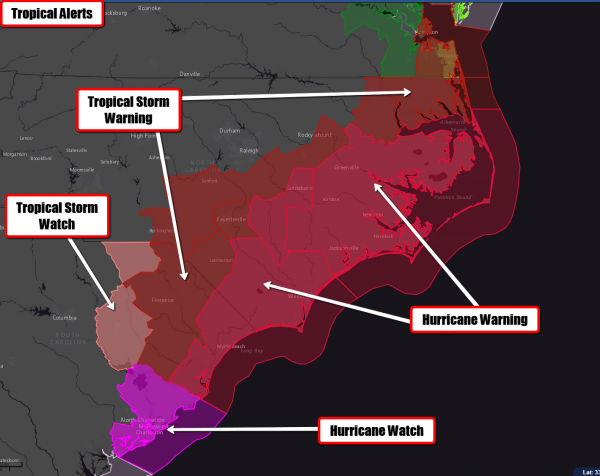 Tropical Alerts. Due to the expected wind impacts of Florence on the Mid-Atlantic, Tropical Storm and Hurricane Watches and Warnings have been issued.

Warnings indicate that either hurricane-force winds (74+ mph) or tropical-storm-force winds (39-73 mph) are expected within 36 hours. Watches means those conditions are possible within 48 hours. 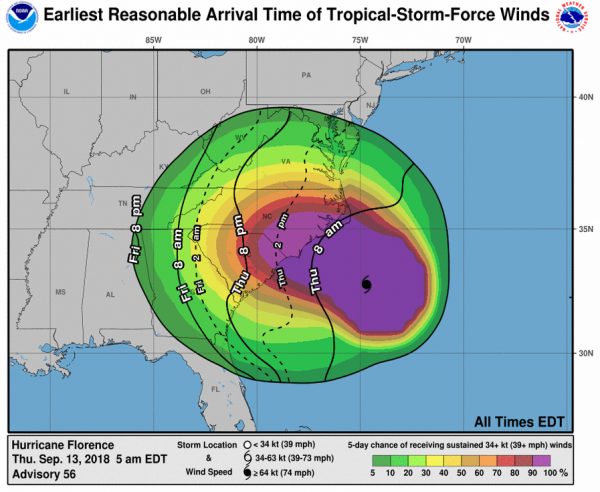 Potential Earliest Tropical Storm Force Wind. Tropical-storm-force winds will start to impact the eastern Mid-Atlantic throughout the day as Florence moves closer to the East Coast. The wide wind field associated with Florence means that stronger wind gusts could even be possible for areas like Washington D.C. this afternoon, and northern Florida into Friday. 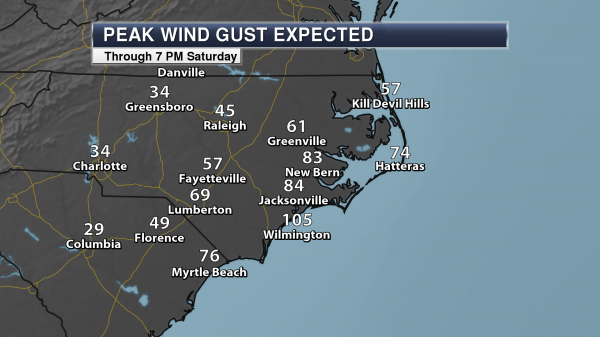 Peak Wind Gust Through 7 PM Saturday. As Florence approaches the coast and eventually makes landfall, very dangerous hurricane-force winds are expected, especially near and along the coast. Winds will start to increase today as Florence approaches the coast, reaching their peak across coastal North Carolina tonight and coastal South Carolina and some areas further inland across North and South Carolina Friday. Near the coast wind gusts over 100 mph will be possible for areas like Wilmington, NC tonight. These winds will easily knock out power and down trees across the region. 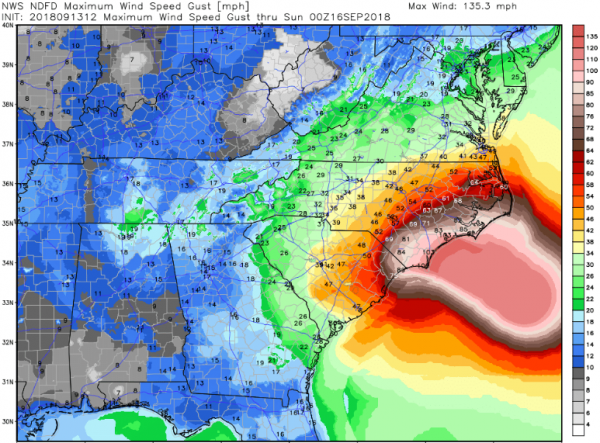 Strong Wind Gusts Reach Inland. You can see how far inland strong wind gusts of approximately 60+ mph (indicated by the browns and pinks) reach with this graphic. These strong winds should remain out of the Raleigh, Charlotte, and Columbia areas, but greatly impact areas of eastern North Carolina and northeastern South Carolina. 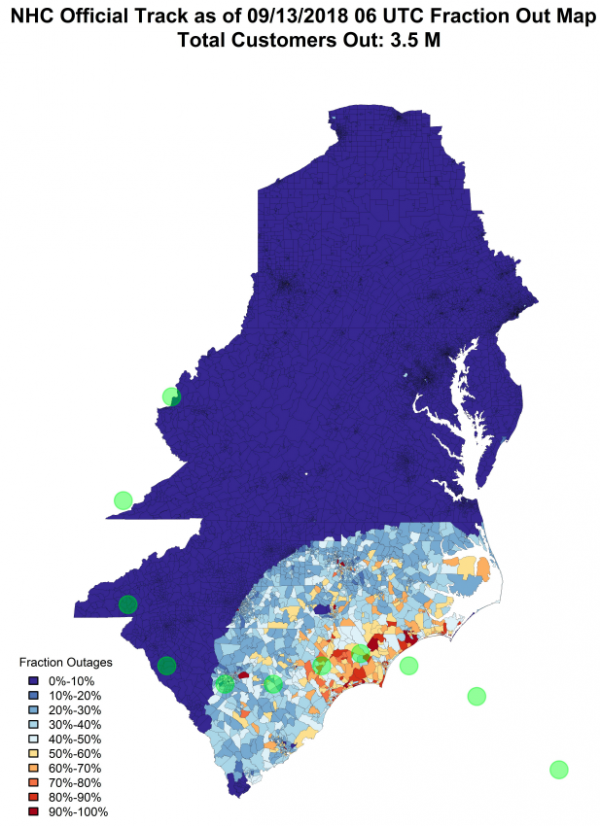 Power Outage Potential. The Guikema Research Group at the University of Michigan is forecasting the potential power outage numbers across the region based off the National Hurricane Center official track and intensity forecast. Their model is estimating 3.5 million without power due to this system across North and South Carolina, with the greatest concentration of outage in and around the area where Florence approaches the coast makes landfall. 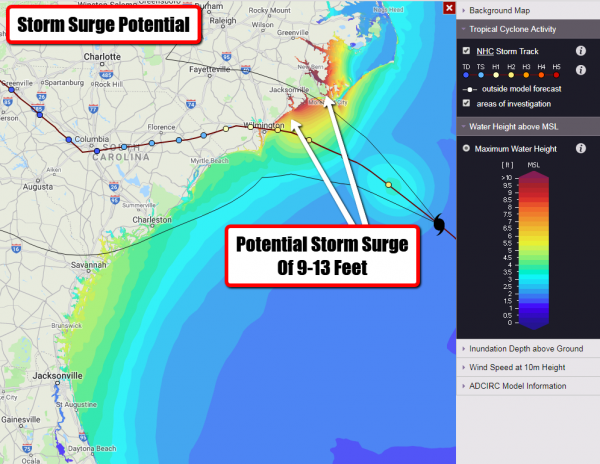 Storm Surge Potential. A destructive and life-threatening storm surge is expected as Florence approaches coastal areas of North and South Carolina. In some areas particularly along the North Carolina coast near Wilmington and up through inland rivers near Jacksonville, New Bern and Greenville the storm surge could reach 9-13 feet above normally dry land. With Florence slowing down and hovering around the coast, these high water levels could occur across several high tides. The deepest water will occur along the coast in areas of onshore winds, where large and destructive waves will accompany the surge. 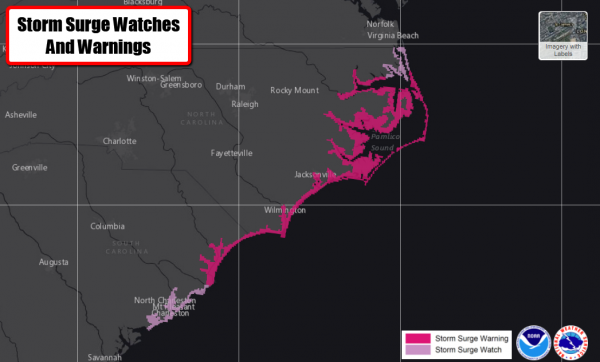 Storm Surge Concerns. Due to the life-threatening storm surge threat, Storm Surge Watches and Warnings are in effect across parts of coastal North and South Carolina: 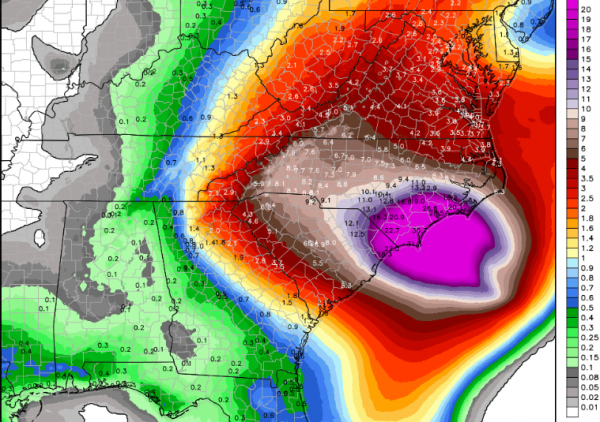 Catastrophic Flooding Possible. The other major concern we have to worry about with Florence is heavy rain. As Florence slows down and takes its time moving inland, rain will dump across portions on the Mid-Atlantic, especially coastal areas of North Carolina and northeastern South Carolina. By the time Florence pushes out of the region, 20-40” of rain could fall in areas like Wilmington, New Bern, and Myrtle Beach. This heavy rain will lead to catastrophic flooding across the region and significant river flooding. Running down potential rainfall totals (via NHC): 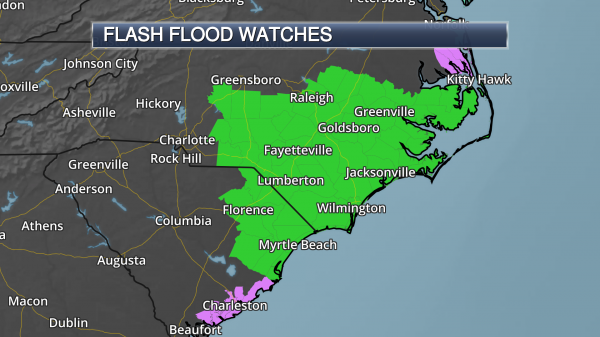 Flood Concerns. Numerous Flash Flood Watches have been issued across parts of North and South Carolina from through Saturday due to the heavy rain potential associated with Florence. 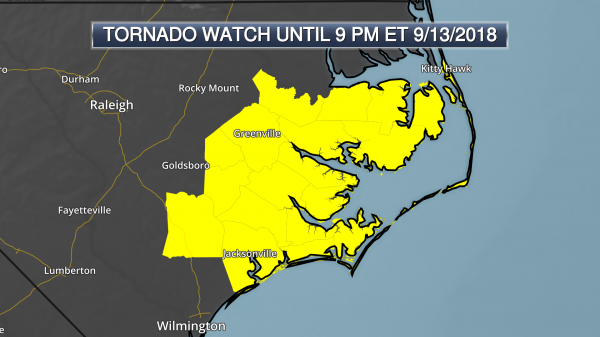 Tornado Watch Until 9 PM ET. Landfalling tropical systems also pose the potential of producing tornadoes. Due to the potential of a few tornadoes with the outer bands of Florence today, a Tornado Watch has been issued for parts of eastern North Carolina (including Jacksonville, Greenville, New Bern, and Hatteras) until 9 PM. 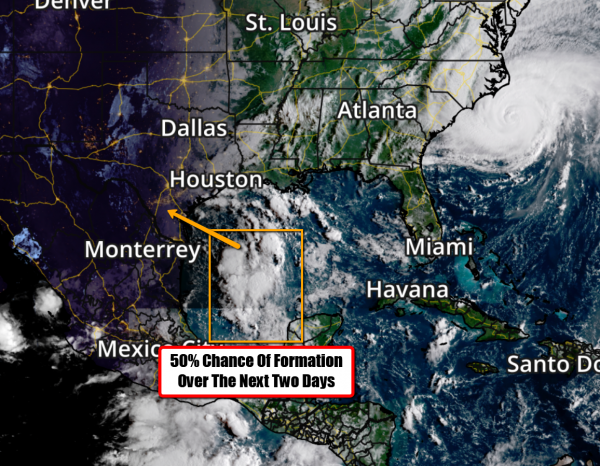 Watching The Gulf Of Mexico. We continue to watch an area of low pressure across the western Gulf of Mexico producing disorganized showers and storms. There is the potential it could still form into a tropical depression, but it does not have much time to do so as it will reach the western Gulf Coast tomorrow. Facilities across portions of northeastern Mexico, Texas, and Louisiana should continue to monitor this situation over the next few days. Whether or not this system forms into something tropical, heavy rain and gusty winds are possible. As of Thursday morning, this area has a 50% chance of forming into a tropical system in the next two days. 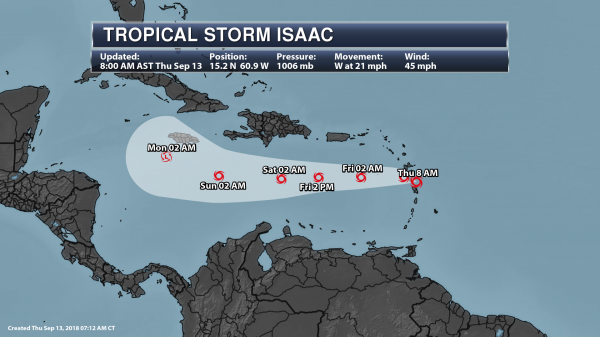 Tropical Storm Isaac. Isaac is approaching the Leeward Islands this morning with gusty tropical storm force winds. As of the 8 AM AST update from the National Hurricane Center, Isaac was situated 25 miles east of Dominica, or 80 miles south-southeast of Guadeloupe, moving west at 21 mph. Isaac had sustained winds of 45 mph. Isaac will continue west over the next several days, passing over the Lesser Antilles today and into the Caribbean. Isaac will continue to weaken, and potentially become a trough of low pressure this weekend. We will continue to monitor this system, though, as some models are indicating this could regenerate into a system in the western Caribbean next week. Due to the threat Isaac poses to the Lesser Antilles, the following watches and warnings have been issued:

A Tropical Storm Warning is in effect for…
* Martinique
* Dominica
* Guadeloupe 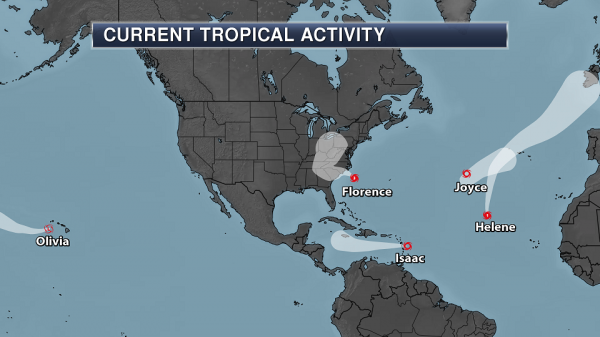 Other Tropical Activity. The tropics continue to be active as we are watching several other systems across the Atlantic and Pacific basins as well this morning: 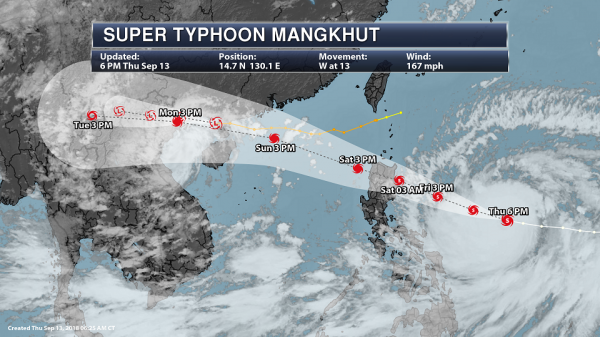 Tracking Mangkhut. Further out into the western Pacific, we continue to track Super Typhoon Mangkhut. As of the 6 PM local time update, Mangkhut was moving to the west at 12 mph with 165 mph winds. The system is expected to continue in a west to west-northwesterly direction over the next several days. This path would bring Mangkhut toward Southeast Asia into the weekend. Right now the system looks to pass south of Tawain, more impacting parts of the northern Philippines Friday and Saturday local time before the center passes south of Hong Kong Sunday.