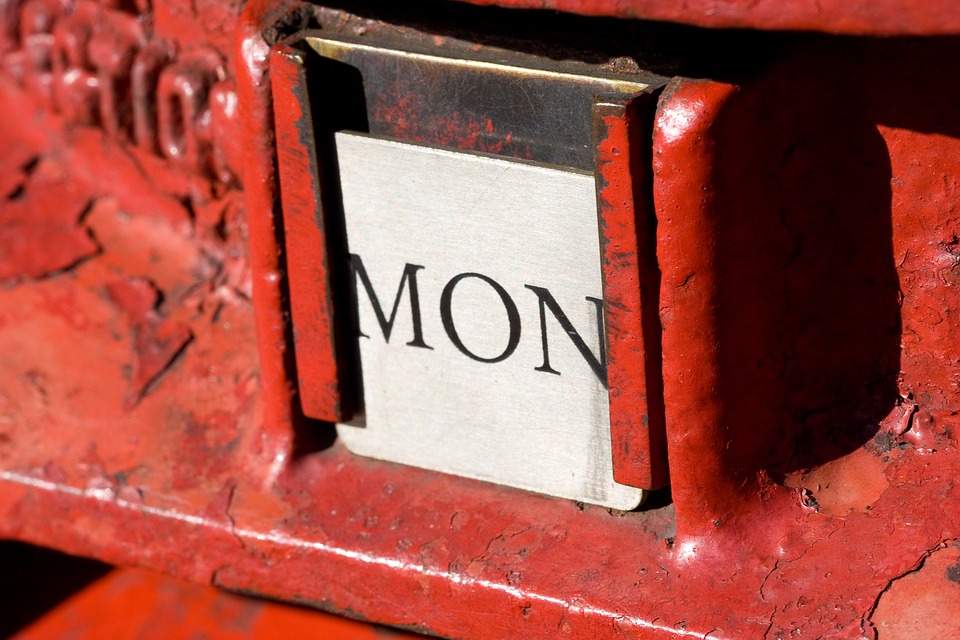 Anniversary Of The Latest 100 On Record For The Twin Cities 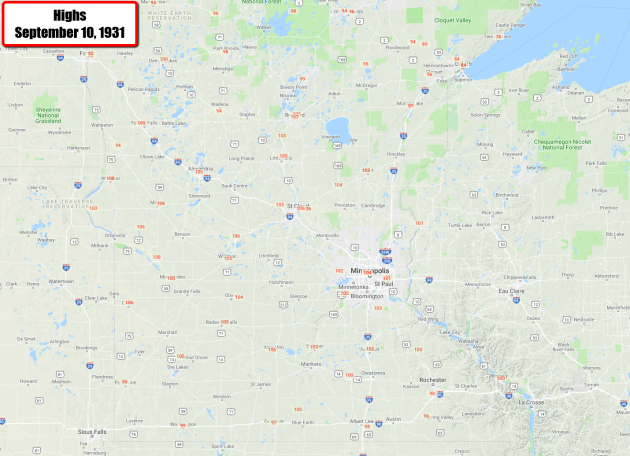 September 10th (Monday) marks the latest in the year we have ever observed a 100-degree high in the Twin Cities. The temperature reached 104F that afternoon in 1921, with St. Cloud reaching a high of 106F (which was also the latest last 100+ for St. Cloud). This is certainly a sign that summer is coming to an end across the region. However, the latest last 90 on record for the Twin Cities is still a month away (October 10th) even though the last average 90+ day is August 27th. Over the past few years, the last 90+ high on was recorded on: 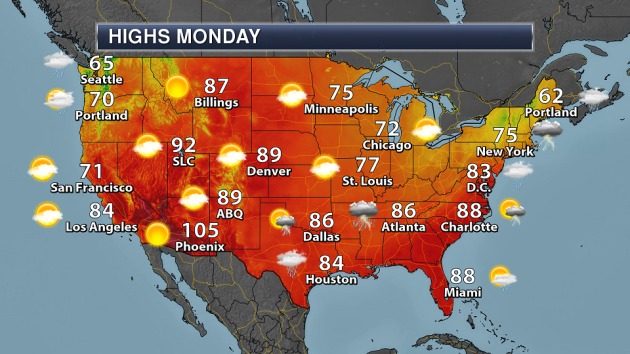 On Monday, a cold front will continue to work east across parts of the Northeast and Mid-Atlantic in association with an area of low pressure across Lake Erie. This contains moisture that is left over from Tropical Storm Gordon, and will produce heavy rain at times, especially across the Northeast. The front stalls out across parts of the Deep South, bringing showers and storms from the Southeast to coastal Texas. A weak system will produce a few showers in the upper Midwest, and a few showers will be possible across the Pacific Northwest.

A few areas of heavy rain will be possible through Friday morning across the nation. First, heavy rain in association with what is left of Gordon will bring parts of the Northeast 3-6” of rain. The stalled out boundary across parts of the Gulf Coast will bring the potential of 2-5” of rain. Meanwhile, we will be watching Florence approach the East Coast by the end of the week, bringing a heavy rain threat along with it. 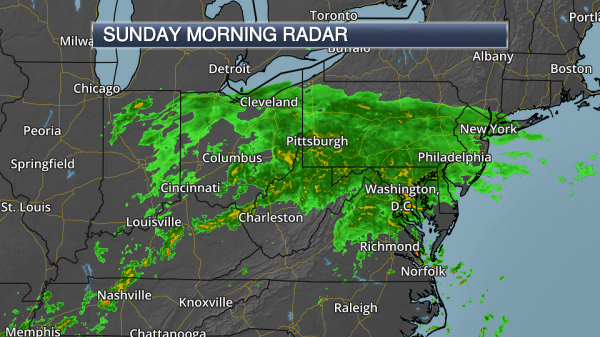 Morning Radar. Tropical moisture with what is left of Gordon continues to track across parts of the Ohio Valley into the Northeast as we head throughout Sunday. Over three and a half inches of rain has fallen over the past 24 hours across parts of southern Indiana, northern Kentucky, and southern Ohio. 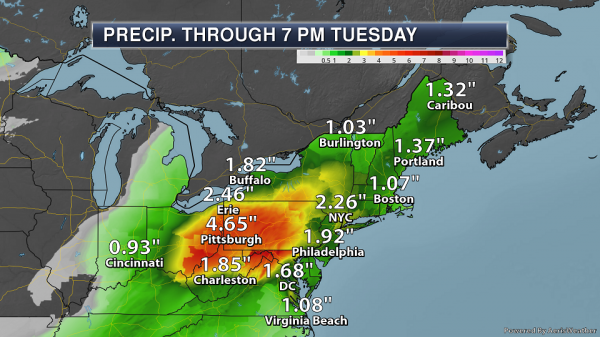 Rain Forecast. The heaviest rain – with the potential of an additional 3-5″ of rain – is expected to fall from eastern Ohio into Pennsylvania through 7 PMTuesday (with most of that falling over the next couple days). 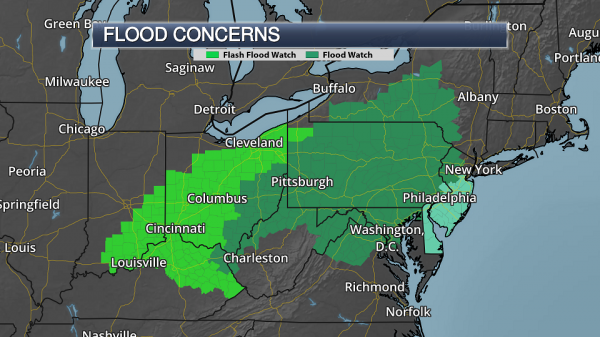 Flash Flood Watches. Numerous Flash Flood Watches remain in effect from the Ohio Valley into the Northeast. This is due to the potential of several inches of heavy rain in association with what is left of Gordon moving through the region. 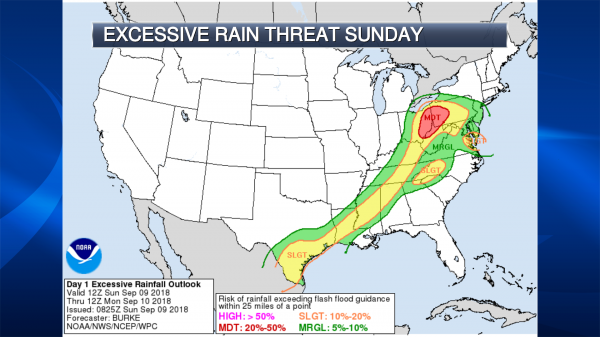 Heavy Rain Threat Today. The area of heaviest rain today into tonightwill be focused across eastern Ohio to western Pennsylvania where a MODERATE Risk of excessive rain that could lead to flash flooding is in place. Hourly rainfall rates of 1-2” per hour could lead to overall totals of 3”+ by tonight. 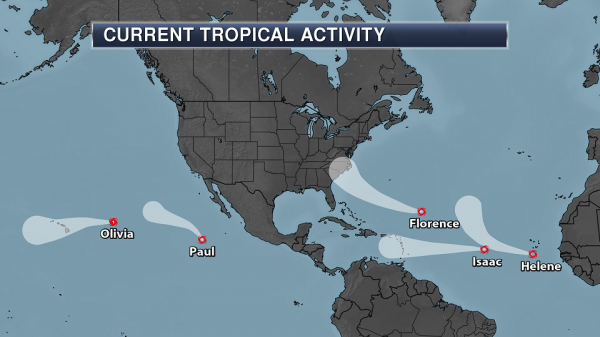 Busy In The Tropics. The average peak of the Atlantic hurricane season is September 10th, and the tropics are certainly busy as we are approaching that date. In the Atlantic, we have Florence, Helene, and Isaac, with Olivia and Paul in the central/Eastern Pacific. Quickly looking at these systems: 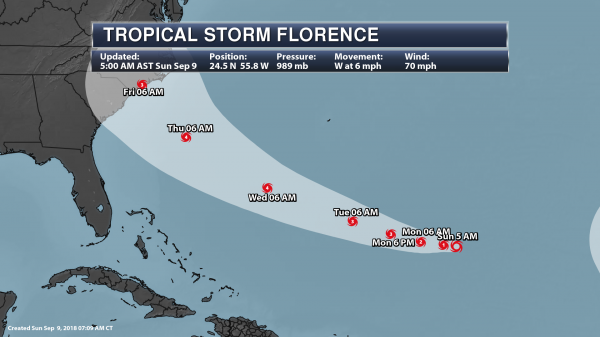 Tracking Florence. Florence continues to be a tropical storm as of Sundaymorning about 765 miles southeast of Bermuda, but it is expected to become a hurricane later today and undergo rapid intensification tonight into Monday. That will allow Florence to quickly become a major hurricane (with winds of at least 111 mph) Monday. Florence is expected to remain a major hurricane through the end of the forecast period. The forecast track of Florence over the next several days – to the west and west-northwest – would bring the center of Florence near the Southeast United States by Thursdayand early Friday. Facilities along the East Coast – especially from northern Florida across the Carolinas and southern Virginia – should make sure their contingency/hurricane plans are in place as the odds are increasing that they may be needed across parts of this region later this week.

Forecast Uncertainty. Odds are increasing that impacts will be felt across parts of the East Coast in the second half of the week from Florence – potentially from a system that makes landfall. There is still some uncertainty as to when the system starts to turn northward, as that will determine which areas will see the worst impacts from Florence. These impacts would include damaging winds, storm surge, and heavy rain/flooding. I am increasingly concerned about the heavy rain threat associated with Florence, as current guidance shows the potential that this system could greatly slow down or even stall out near/across the East Coast late in the week, meaning the heavy rain threat could last for several days. 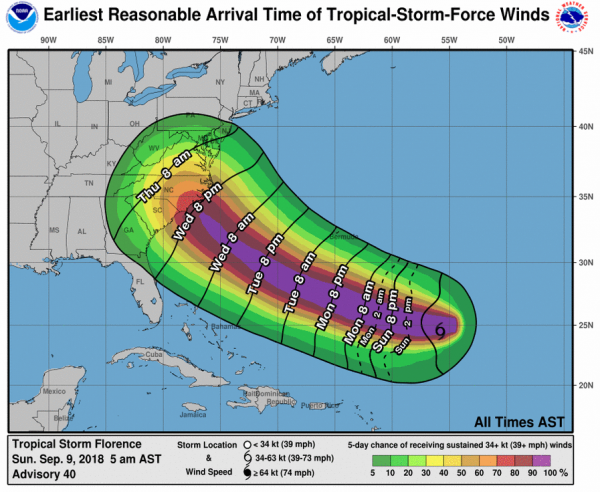 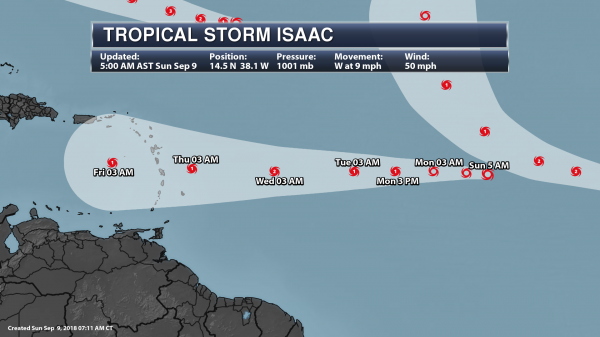 Tracking Isaac. Tropical Depression Nine became Tropical Storm Isaac yesterday, and additional strengthening is expected over the next few days as the storm continues west. By Wednesday morning, Isaac is forecast to have sustained winds of 100 mph, but the system will then start to run into stronger winds aloft which are expected to weaken Isaac. Between Thursdayand Friday, Isaac is expected to cross the Lesser Antilles and into the Caribbean. 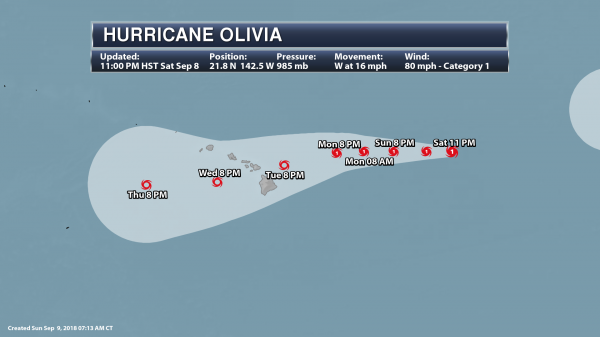 Tracking Olivia. Out in the Central Pacific, Olivia continues to quickly move west this morning. As of the 11 PM HST update, Olivia had sustained winds of 80 mph and was moving to the west at 16 mph. The center of the storm was located 825 miles east-northeast of Hilo. This system will continue moving west, potentially at a slightly slower speed, though Mondaybefore turning to the west-southwest. During this time Olivia will continue to slowly weaken. This track would bring Olivia over the Hawaiian Islands sometime between late Tuesday and late Wednesday. It is currently expected that Olivia will still be a strong tropical storm at this time, with forecast wind speeds of 65 mph Tuesday evening, which means some significant impacts will be possible across the Hawaiian Islands. 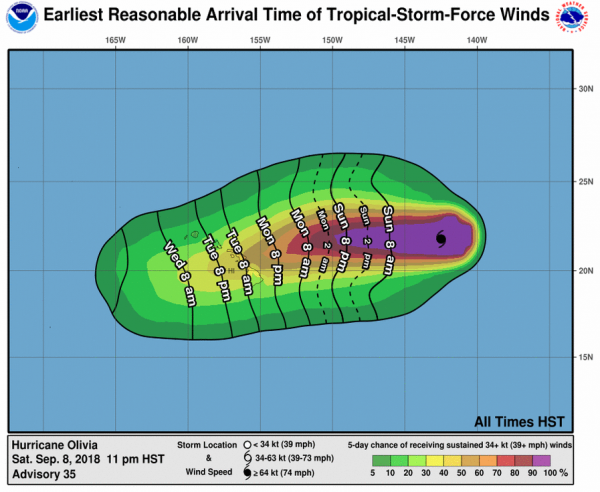 Potential Earliest Tropical Storm Force Winds. As Olivia tracks closer to Hawaii this week, tropical storm force winds could be felt as soon as Tuesday morning across the islands. These winds would start to disrupt preparations ahead of the storm. 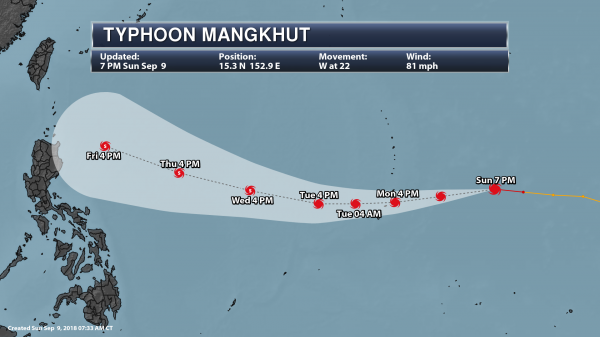 Tracking Mangkhut. Further out into the Pacific, Typhoon Mangkhut is intensifying and will impact Guam Monday. Even though the system only has 80 mph winds as of late Sunday local time (the equivalent of a Category 1 hurricane), this system is expected to quickly strengthen and could have winds of 115 mph (the equivalent of a major category 3 hurricane) by Monday afternoon. A typhoon warning for Guam, Rota, Tinian and Saipan in the Marianas has been issued as winds gusts are expected to reach at least 75 mph by Monday evening in Guam. Up to 5” of rain and inundation of up to 10 feet due to a storm surge of up to 5 feet will also be possible. This system will continue to strengthen next week, and it could be a threat to Southeast Asia, including Taiwan, late in the week.

More from the Durango Herald: “Fall color is coming on sooner this year. We almost said sooner than normal, but for all we know, this is the new normal. It’s sooner than in recent years past.  Most of Colorado is experiencing significant drought. When that happens, trees such as aspens become stressed and the color change comes faster and doesn’t last as long.  One good snowpack this winter and the foliage will get back to its old schedule, and the rivers and reservoirs will rise. We can all hope for that.  Yet we also know that, because of warming, we can expect more frequent periods of drought. What we don’t know is what, if anything, we can do now to stave off warming.”

We Just Sweated Through the Hottest Summer Nights on Record

More from Earther: “The three-month span from June to August is always the worst season. It’s a season of armpit sweat; a time of searching for shade or air conditioning. And if it felt like this summer sucked even more than usual, you’re not imagining it. The summer of 2018’s hellacious heat set a new record.  U.S. summer nights were the hottest ever recorded, according to data released on Thursday by the National Centers for Environmental Information. Factoring in daytime highs, summer 2018 came in as the fourth warmest on record for the U.S., with temperatures 2.5 degrees Fahrenheit above the 20th century average. Every summer in the top 10 has occurred since 2002.”