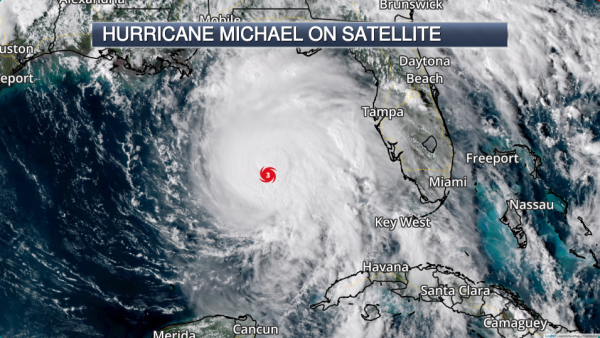 Michael on Satellite. The eye of the hurricane became very distinct earlier this afternoon and has assumed a very “classic” hurricane look. This has indicated strengthening and sure enough, the latest reconnaissance mission has confirmed this. Michael is now a Category 3 hurricane with maximum sustained winds of 120 mph. The outer bands of Michael have been already impacting the Florida peninsula with waves of heavy rain and even a minor storm surge reported in the Fort Myers area. Weather conditions will continue to rapidly deteriorate for north Florida as Michael approaches. 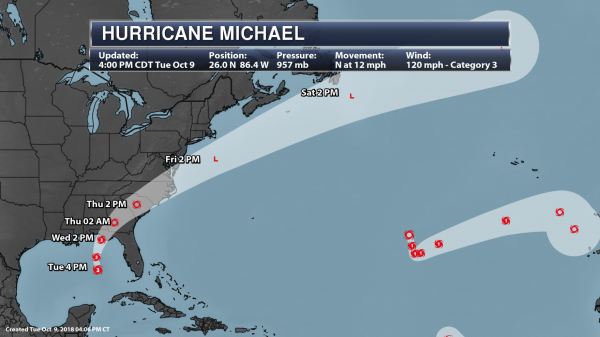 Latest Track Update. Michael continues to track through favorable conditions in the next 12 to 18 hours, which could lead to further strengthening before making landfall. After landfall, rapid weakening will occur. However, tropical-storm conditions are still likely for much of the Southeast, including the Carolinas. Michael continues to move generally north-northwestward with a slight turn northward expected tonight. Little change in the overall track occurred at the 4 PM update. The storm will see an increase in forward speed, which places the center of the storm in southwest Georgia by Thursday morning and then South Carolina by Thursday afternoon. 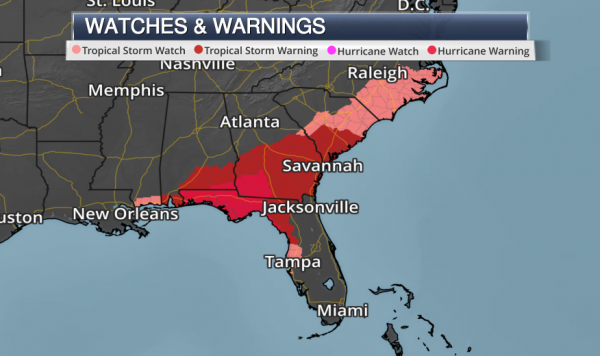 A Tropical Storm Watch is in effect for…
* Chassahowitzka to Anna Maria Island Florida, including Tampa Bay
* Mississippi/Alabama border to the Mouth of the Pearl River
* South Santee River South Carolina to Duck North Carolina
* Pamlico and Albemarle Sounds 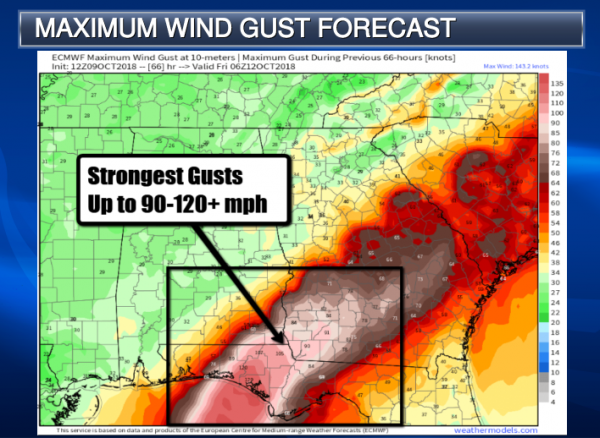 Hurricane-Force Winds Extend Well Inland. Hurricane-force winds currently extend out 45 miles from the center of Michael with tropical-storm-force winds extending out up to 175 mph from the center. With Michael’s current track, the strongest winds will occur in the Panama City Beach with hurricane-force winds possibly into the very southeastern tier of Alabama (including Dothan) and southwestern Georgia (including Albany). These areas are currently under hurricane warnings. As stated in our last briefing, these damaging winds will result in widespread power outages that could last for days if not a week or more in areas, along with major tree and structural damage. Strong wind gusts of at least 40 mph will continue along and mainly to the right of the center as Michael continues to move inland across parts of Georgia and the Carolinas through the end of the week, which would also have the potential to knock out power.

Life-threatening Storm Surge up to 13 ft. One of the most dangerous aspects of Michael is the storm surge flooding potential. The NHC continues to “up” the storm surge forecast, now calling for a max surge of up to 13 ft possible. Storm surge flooding will occur along the immediate coastline near and east of where the center makes landfall. Michael is expected to affect portions of the Florida Gulf coast that are especially vulnerable to storm surge, particularly Apalachee Bay south of Tallahassee. The combination of this dangerous storm surge and the high tide will result in the following peak surges at the time of high tide:

Here are the expected times of the high tide for several locations within the surge threat:

The following Storm Surge Watches and Warnings are in effect: 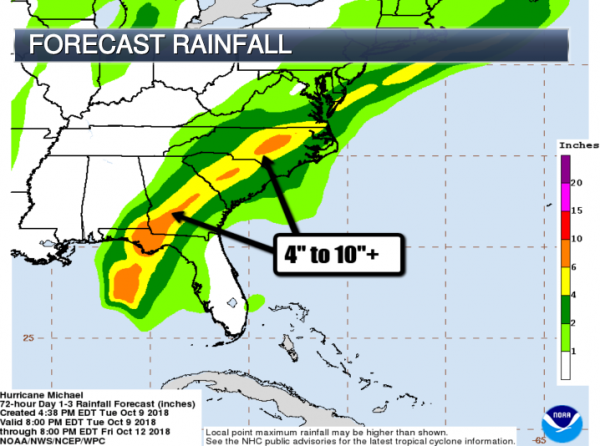 Widespread Torrential Rainfall. Heavy rain associated with Michael will have a widespread impact in the southeastern United States. We’re expecting the heaviest precipitation to accumulate in a line from the Florida Panhandle to the Carolinas, where a swath of generally 4″ to 10″+ will be possible. The highest totals will likely occur in the Panhandle and Big Bend area of Florida, southeast Alabama, and parts of southwest and central Georgia where 4″ to 8″ will be commonplace with isolated totals up to 12″. The remainder of Georgia, the Carolinas and southern Virginia will see 3″ to 6″ with isolated 8″ totals. Elsewhere, 1″ to 3″ will be expected. 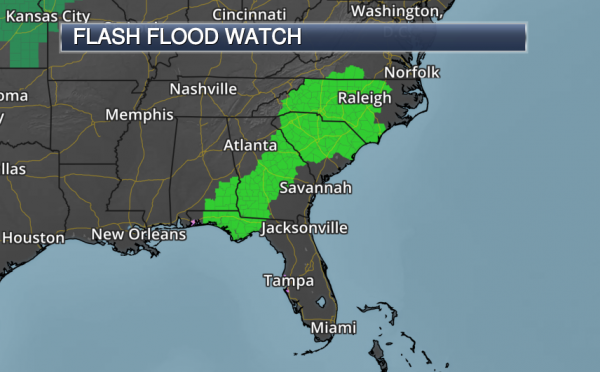