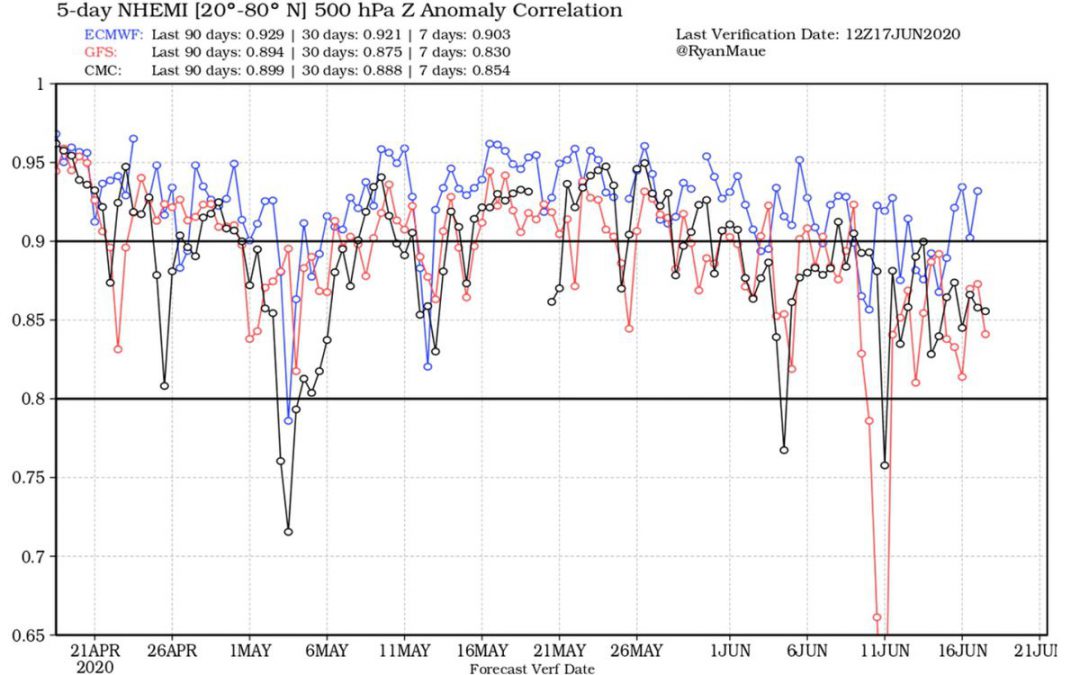 “Dad, check YouTube for a solution first. Chances are there’s a video that explains what to do.” My boys were right about that one. No matter what the task at hand is, it’s helpful to have the right tools.

Meteorologist rely on weather models, but the trick is finding the right blend of model solutions for the most accuracy and highest confidence. Personally, I look at as many models as possible, but when push comes to shove the weather tool I rely on the most is ECMWF (European model). It’s not perfect, but previous studies have shown it is consistently more accurate. NOAA’s GFS model has improved over time, but it’s still playing catch-up.

Enjoy today’s thaw, because 1-3” of snow tomorrow marks the leading edge of more subzero fun. The mercury stays below zero Thursday, with a wind chill of -25F in the metro. I see another quick subzero pop next Monday, then hints of moderation as waves of Pacific air push inland.

Only in Minnesota could an extended outlook of 20s and 30s (above zero) be greeted with breathless celebratory anticipation.

Couple of Inches Wednesday. ECMWF and NOAA models predict 1-3” Wednesday with more well north of MSP. Conditions may be ripe for blowing and drifting in open areas as winds gust to 30 mph, pulling in the next shot of subzero air.

Another Arctic Occupation. This one won’t last long either, but temperatures remain well below zero Thursday and the first half of Friday before some recovery by Saturday. All this bitter air is pushing the main storm track well south of Minnesota, at least through the first half of next week.

Very Cold GFS Solution. Let’s see if this is a fluke or a real trend, but if the guidance above verifies our subzero interludes may continue well into January. Not convinced just yet.

Climate Model Ensemble. Most (not all) models keep temperatures for much of USA, including Minnesota, milder than normal into March. Source: NOAA.

Historic US Weather Events in 2021, by the Numbers. Capital Weather Gang examines the biggest extreme-weather stories of last year: “From record-shattering heat to frigid waves of cold, torrential downpours to relentless drought, 2021 has been a year of extremes in the United States. As personal stories and images illuminate the devastation wrought by the events, the raw numbers also underline the widespread impacts and extraordinary nature of this year’s weather…The United States experienced 18 billion-dollar weather disasters in the first nine months of 2021, totaling more than $104 billion. Driven largely by severe thunderstorms and a relentless hurricane season, this year has so far seen the second-most billion-dollar disasters of any year since 1980, and it could surpass 2020 for the record when events from October, November and December are tallied…”

We Can Build Homes to Survive Tornadoes. We Just Haven’t. An Op-Ed at The Washington Post (paywall) caught my eye; here’s a clip: “…No one believes all tornado damage can be avoided. But most tornadoes — more than 95 percent — have ground-level wind speeds of 135 miles per hour or less. Researchers from Texas Tech University who conducted the post-tornado surveys in Lubbock stated that while best estimates suggested maximum wind speeds at ground level were 200 miles per hour, most of the damage was caused by winds in the range of 75 to 125 miles per hour. With better building construction, we can narrow the width of the most catastrophic destruction — the distance away from the tornado’s centerline — so that homes, while possibly experiencing damage, remain occupiable immediately after a tornado. For a house to withstand wind loads, which pull up against the building’s structure and away from the ground against gravity, they must have strong, continuous lines of mechanical connections that tie every component, from the roof through the walls, down to the foundation...”

The Causal Effect of Environmental Catastrophe on Long-Run Economic Growth from 6,700 Cyclones. A new paper at NBER highlights the “long-tail” effect of tropical cyclones on local economies; here’s an excerpt of the summary: “… Income losses arise from a small but persistent suppression of annual growth rates spread across the fifteen years following disaster, generating large and significant cumulative effects: a 90th percentile event reduces per capita incomes by 7.4% two decades later, effectively undoing 3.7 years of average development. The gradual nature of these losses render them inconspicuous to a casual observer, however simulations indicate that they have dramatic influence over the long-run development of countries that are endowed with regular or continuous exposure to disaster. Linking these results to projections of future cyclone activity, we estimate that under conservative discounting assumptions the present discounted cost of “business as usual” climate change is roughly $9.7 trillion larger than previously thought…”

How to Prepare for Power Outages. A post at WIRED.com (paywall) has some good advice; here’s a clip: “…The worst part of an outage is when night falls, and in the winter months that can come early in the evening. Without power your place is enveloped in darkness, and basic tasks like just walking to the kitchen can result in slips, bumps, and unnecessary injury in general. The first thing I keep on hand—in strategic places around the house—are LED lanterns. They’re low-cost, use very little power, and can go for months without having to replace the batteries. Keep one near a stairwell or on the kitchen counter so you can navigate your now-enshrouded home safely. And if you need to go somewhere else in the house? They’re portable. While being able to traverse your own place safely is important, the secondary effect is eliminating the need for the flashlight app on your phone, which is usually a battery vampire…”

Every Electric Vehicle With At Least 300 Miles of Range. Mashable has details on a growing list; here’s an excerpt: “...The jaw-dropping Lucid Air Dream edition electric vehicle has massive range — and a price tag to match. This Saturday, the very first Lucid cars will be delivered at the company’s headquarters in Northern California. The luxury sedan can travel 520 miles on a single charge, the most of any EV available anywhere. But that long range will cost you at least $169,000. Here are other electric vehicles that get at least 300 miles on a single charge. It’s not a long list now, but as more EVs arrive in 2022 and beyond (we’re looking at you, BMW iX, Ford F-150 Lightning, and Cadillac Lyriq), the range wars will be on…”

Air Travel Misery Map. Here’s a lovely way to start out the New Year. Between weather and staff shortages flying in the coming weeks may be a gong-show. Flight Aware has a map that summarizes real-time travel problems for airports across the US.

January 4, 1971: A snowstorm moves through the Upper Midwest. Winona gets over 14 inches.

More Hurricanes Could Hit New York, Boston and Other Northern Cities as Planet Warms. USA TODAY has a summary of new research: “A warming planet means hurricanes this century could spin farther north in the Atlantic than they used to, potentially affecting such cities as New York and Boston, a new study published Wednesday suggests. The study said systems such as 2021’s Hurricane Henri, which hit New England in August as a tropical storm, could be harbingers of such future storms. “This represents an important, under-estimated risk of climate change,” said study lead author Joshua Studholme of Yale University, in a statement. “This research predicts that the 21st-century’s tropical cyclones will likely occur over a wider range of latitudes than has been the case on Earth for the last 3 million years,” he added…”

The World Paid a Huge Financial Price for Climate-Driven Extreme Weather in 2021. TIME.com has a summary of what went wrong last year; here’s an excerpt: “Ten of this year’s most destructive weather events cost a combined $170 billion in damages, according to a new study. Hurricane Ida, a tropical storm that pummeled much of the eastern U.S. with lashing rain in August, killed at least 95 people and cost the economy $65 billion. A month earlier, floods in Europe caused 240 deaths and an economic loss of $43 billion, according to research published by U.K. charity Christian Aid. Floods in China’s Henan province in July killed more than 300 and cost in excess of $17 billion. “The costs of climate change have been grave this year,” said Kat Kramer, Christian Aid’s climate policy lead and author of the report. “It is clear that the world is not on track to ensure a safe and prosperous world…”

“Doomsday Glacier” in Antarctic Could Collapse Soon: New Research. Rolling Stone reports; here’s a clip: “…A few weeks ago, scientists participating in the International Thwaites Glacier Collaboration, a $25 million five-year-long joint research program between the National Science Foundation in the U.S. and the Natural Environment Research Council in the U.K., presented their latest research. They described the discovery of cracks and fissures in the Thwaites eastern ice shelf, predicting that the ice shelf could fracture like a shattered car window in as little as five years. “It won’t scatter out into sea as quickly as what you saw when you were down there,” Erin Pettit, a glaciologist at Oregon State University and one of the lead principal investigators in the ITGC, later told me. “But the basic process is the same. The ice shelf is breaking up and could be gone in less than a decade...”