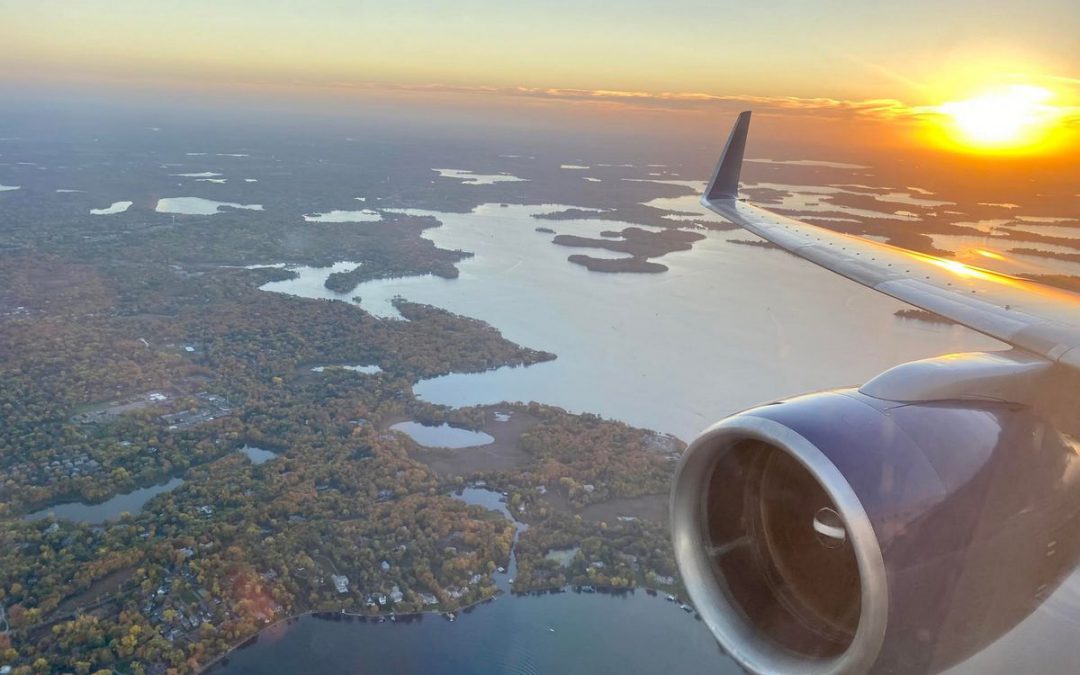 If anyone asks (doubtful) nearly 8 inches of snow fell on the MSP metro area one year ago today. Nothing like easing into winter. In stark contrast summer’s overheated afterglow has pushed deep into October this year, treating Minnesotans to a rare 6-month boating season. A small reality check is inevitable, but no volleys of arctic air or frozen water are imminent.

Models suggest up to half an inch of rain today, with more west of the Twin Cities. A Wet Leaves Advisory has been posted for the PM commute. Be careful out there. Skies begin to clear behind the storm Thursday, and outlying suburbs may experience the first frost of the season Friday morning – coming about 9 days later than the 30-year average. We salvage some cool sunshine Saturday, but more (rain) showers slosh into town Sunday.<p>Still not packing away the shorts yet: both ECMWF and GFS predict more 70s next week and the long-range (low confidence) Halloween outlook calls for mild 50s.

No blizzards [checks notes] this year, it seems.

Showery Rains Today. I’m not (yet) convinced we’ll see this much rain, but a quarter to half inch of rain will fall on many communities today, maybe more south and west of MSP. Today is the wettest day in sight into next week.

The Bugs are Nervous. Allergens too, because a fairly widespread frost/freeze is likely by Friday morning with 20s across much of greater Minnesota. The immediate Twin Cities may be spared a heavy frost, but outlying suburbs should dip below 32F Friday and possibly Saturday morning as well.

Cool-ish. The maps still don’t look like late October for much of the USA. Prevailing winds are whisking the coldest air well north of the USA; we are just experiencing glancing blows of chilly air east of the Rockies, a pattern which may remain largely intact through the end of October.

October Rainfall Departures. Rainfall this month is running above average for parts of central and northwestern Minnesota into the Red River Valley and Dakotas – while a deficit lingers for much of southern and eastern Minnesota and much of Wisconsin.

La Nina is Coming. Here’s What That Means for Winter Weather in the U.S. Keep in mind every La Nina is different, so adjust your expectations accordingly. NPR has an overview; here’s the intro: “La Niña will most likely be joining us for the winter again, according to federal forecasters. The National Oceanic and Atmospheric Administration’s (NOAA) Climate Prediction Center announced on Thursday that La Niña conditions have developed and are expected to continue, with an 87% chance that they will be in place from December to February. La Niña (translated from Spanish as “little girl”) is not a storm, but a climate pattern that occurs in the Pacific Ocean every few years and can impact weather around the world. The U.S. is expected to feel its effects on temperature and precipitation, which could in turn have consequences for things such as hurricanes, tornadoes and droughts…”

A Quarter of U.S. Infrastructure at Risk from Future Flooding. Here’s an excerpt from businessreport.com: “One-quarter of all critical infrastructure in the U.S.—36,000 facilities including airports, utilities, and hospitals—is at risk of becoming inoperable due to the risk from future flooding, according to a report from the First Street Foundation, a New York-based research group. In addition, 2 million miles of roads, nearly 1 million commercial buildings, and more than 12 million homes are also at risk of being shut down or severely damaged by flooding. “As we saw following the devastation of Hurricane Ida, our nation’s infrastructure is not built to a standard that protects against the level of flood risk we face today,” Matthew Eby, founder and executive director of First Street, says in a press release, “let alone how those risks will grow over the next 30 years as the climate changes.” The research looked at all types of flood risk in every city and county across the U.S. It is the most extensive analysis of its kind to date...”

New York City’s Subway System Isn’t Ready for a Storm-Filled Future. A post at Popular Science caught my eye; here’s a clip: “…Timon McPhearson, a professor and the director of the Urban Systems Lab at the New School, argues that there is not one perfect solution for climate proofing the city’s subway platforms. He says there needs to be a tiered approach that can work on addressing different causes of flooding during a storm. “We have to increase drainage, we’re going to have to have more pumps installed,” he says. “[Improvements] also includes green infrastructure-type ways of absorbing and draining water out of the most at-risk areas … we should also invest in increasing the porosity of our system because it’s highly paved–every single bit of payment should be absorbing water...”

Seville, Spain to Become World’s First City to Name Heat Waves. Jason Samenow at Capital Weather Gang has the details: “Can naming heat waves call more attention to them and save lives? Seville, Spain, will be the world’s first laboratory to test this concept in 2022, when the city launches a new initiative to name and rank heat waves, much like weather forecasters do for hurricanes. Public health officials have long sought to raise awareness of heat waves, which are the leading cause of weather-related deaths in many parts of the world. The problem is more pressing now as climate change increases the intensity, frequency and duration of extreme heat events. Seville’s new effort, in partnership with the Adrienne Arsht-Rockefeller Foundation Resilience Center, aims to raise the public recognition of heat waves and more urgently communicate their threat. Public health and climate experts have made the case that naming heat waves, which are invisible and abstract, makes them more concrete and thus easier to identify, act upon and share information about...”

A Secretive Hedge Fund is Gutting Newsrooms. The Atlantic tells the sad tale; here’s an excerpt: “The 21st century has seen many of these generational owners flee the industry, to devastating effect. In the past 15 years, more than a quarter of American newspapers have gone out of business. Those that have survived are smaller, weaker, and more vulnerable to acquisition. Today, half of all daily newspapers in the U.S. are controlled by financial firms, according to an analysis by the Financial Times, and the number is almost certain to grow. What threatens local newspapers now is not just digital disruption or abstract market forces. They’re being targeted by investors who have figured out how to get rich by strip-mining local-news outfits. The model is simple: Gut the staff, sell the real estate, jack up subscription prices, and wring as much cash as possible out of the enterprise until eventually enough readers cancel their subscriptions that the paper folds, or is reduced to a desiccated husk of its former self...”

October 20, 1916: Accumulating snow falls in south central Minnesota with 4.5 inches recorded in New Ulm, 4 inches in Farmington and Hutchinson, 3.5 inches in Montevideo, and 3 inches in Faribault.

The Costs of Climate Change are Getting Lost on Capitol Hill. The Washington Post (paywall) has an analysis: “Prominent economists say climate change will impose astronomical costs on the United States in the coming years through natural disasters, lost labor productivity, energy costs, migration and other impacts. And they argue that spending more money to address climate change today is a smart investment that will pay off later. “I think we have substantially under-invested in climate action for a very long time, but certainly since 1988, when Congress had its first hearings on climate change,” said Robert Kopp, a professor at Rutgers University and co-author of “Economic Risks of Climate Change: An American Prospectus.” “The longer we wait, the more damages we’ll have to deal with, and the more costly it will be to lower our emissions in a way that avoids future damages,” Kopp said…”

America’s Next Great Migrations are Driven by Climate Change. Here’s an excerpt of an Op-Ed at Scientific American: “The increasingly frequent and intense floods, heat waves, wildfires and other extreme climate events jolt us into realizing that we don’t have the comfortable distance of 2040 or 2050 by which to mitigate climate change. The future we were meant to evade is here already, decades ahead of schedule. As world leaders gather at the global climate negotiations in Glasgow in November, they—and we—need to focus on two imperatives simultaneously. First, we must avoid the unmanageable by rapidly reducing the emissions that are heating up the planet. And second, we must manage the unavoidable by making ourselves more resilient to the changes that are already here or soon will be. And for billions of people, to adapt will mean to move...”

As Africa’s Glaciers Melt, Millions Face Drought and Floods, U.N. Says. Here’s the intro to a story at Reuters: “Africa’s fabled eastern glaciers will vanish in two decades, 118 million poor people face drought, floods or extreme heat, and climate change could shrink the continent’s economy by 3% by mid-century, the U.N. climate agency warned on Tuesday. The latest report on the state of Africa’s climate by the World Meteorological Organization (WMO) and African Union agencies paints a dire picture of the continent’s ability to adapt to increasingly frequent weather disasters. The report says last year was Africa’s third warmest on record, according to one set of data, 0.86 degrees Celsius above the average in the three decades leading to 2010. It has mostly warmed slower than high-latitude temperate zones, but the impact is still devastating...”

Leading Experts Weight In on the Importance of Climate Disclosure to Reduce Emissions. Here’s an excerpt from Forbes: “According to the American Meteorological Society’s State of the Climate report in 2020, the past decade was the hottest ever recorded. Key findings from the report highlighted that climate change is no longer a problem for future generations but instead impacts today’s society with consequences being felt around the world. Given the changes to the physical environment brought by climate change and the regulatory efforts required to limit those changes and adapt to the environment, the Commonwealth Climate and Law Initiative’s report on risks and opportunities associated with global warming mentioned that climate-related disclosure could play an important role in mitigating risks, increasing transparency and supporting the transition to a lower-carbon economy...”