Latest On Gonzalo and Douglas – National Weather Outlook For July 23, 2020 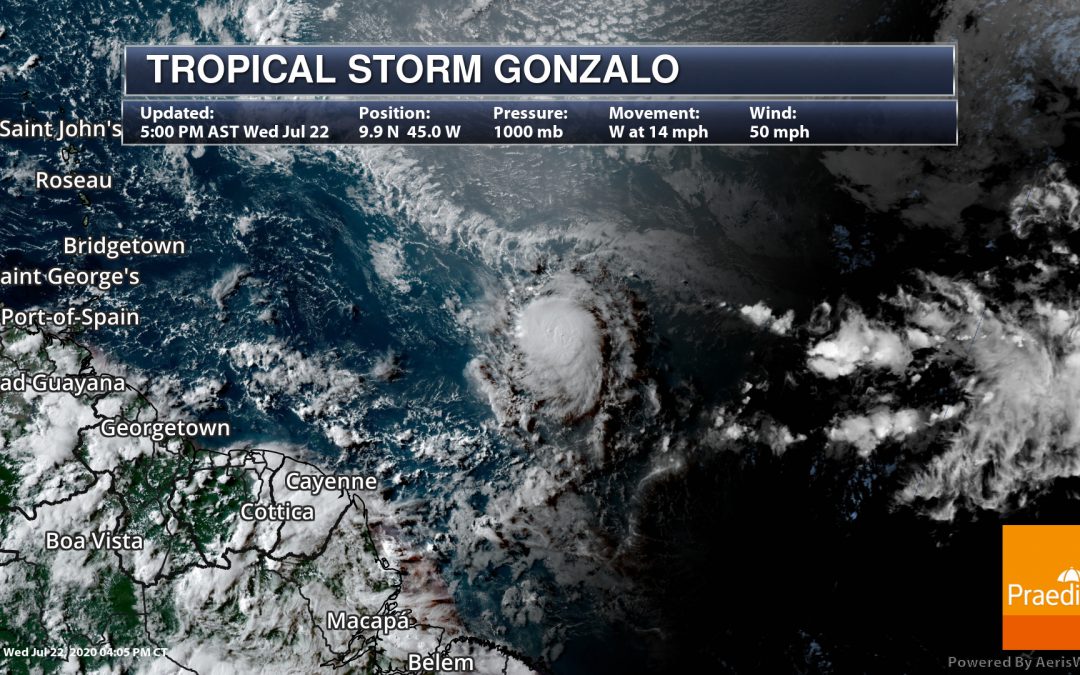 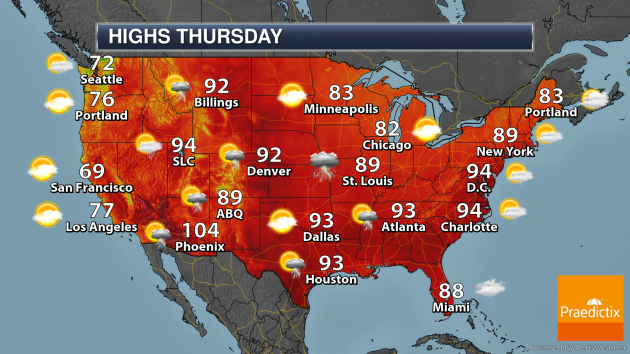 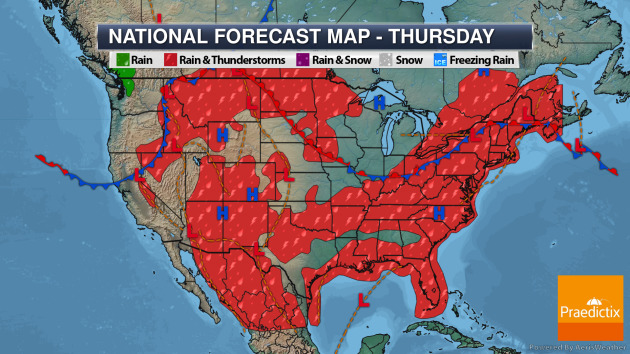 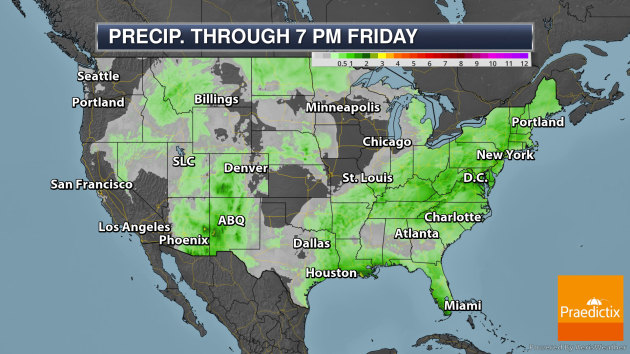 Some of the heaviest rain through Friday evening will be along the Gulf Coast due to a tropical wave moving through the Gulf of Mexico toward the mid-Texas coast. I’ll have more on this tropical wave below. 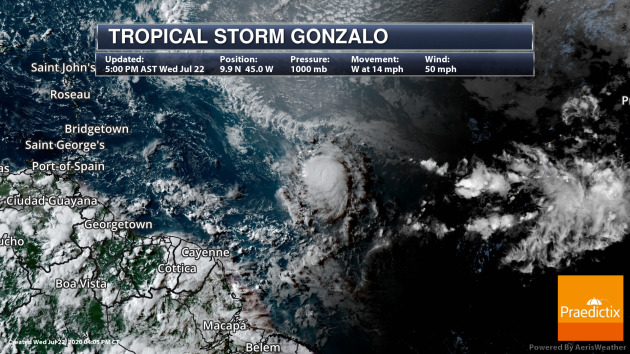 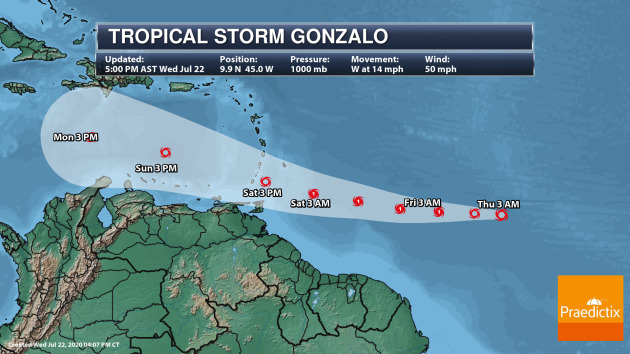 Tropical Depression Seven strengthened into Tropical Storm Gonzalo on Wednesday and is expected to become a hurricane Thursday as it continues to move west. As of 5 PM AST, Gonzalo had winds of 50 mph and was moving west at 14 mph. While it does look to become a hurricane, there are still questions as to the future of the storm about 48-60 hours out, which is when the National Hurricane Center starts to show the storm starting to weaken as it moves through the Windward Islands. 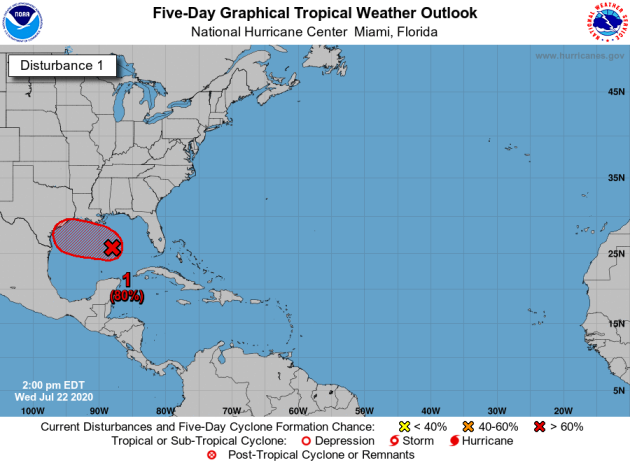 Meanwhile, we continue to track a tropical wave in the Gulf of Mexico that now has a high chance of becoming a tropical system through the end of the week before it makes landfall along the mid-Texas coast. 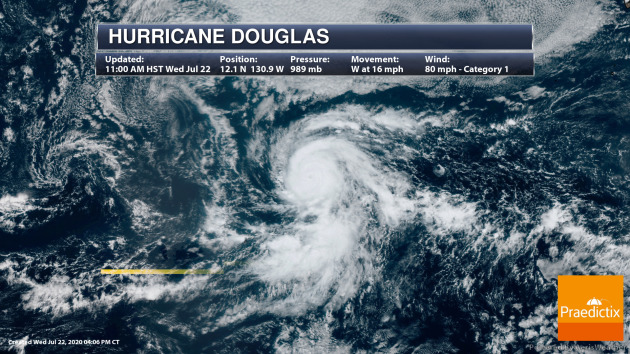 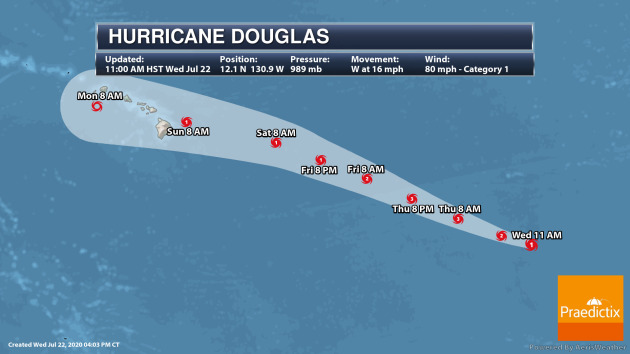 In the Eastern Pacific, Douglas became the first hurricane of the season and could become a major hurricane Thursday. Weakening is expected to occur, though, heading into the weekend as the system potentially approaches Hawaii.

More from Capital Weather Gang: “These scientists now say it is likely that if human activities, such as burning oil, gas and coal, push carbon dioxide to such levels, the Earth’s global average temperature will most likely increase between 4.1 to 8.1 degrees Fahrenheit (2.3 and 4.5 degrees Celsius). The previous and long-standing estimated range of climate sensitivity, as first laid out in a 1979 report, was 2.7 to 8.1 degrees Fahrenheit (1.5 to 4.5 Celsius).”

More from CNET: “About 300 light-years from Earth lies TYC 8998-760-1, a star that resembles our own sun, kind of like a twin, but born around four and a half billion years later. In May, a team of astronomers studying the sunlike star discovered it wasn’t alone — a giant gas planet was keeping it company on its voyage through the cosmos. They dubbed it TYC 8998-760-1, as convention dictates. Now, just two months later, the same team has discovered another planet, even farther away from the star, dubbed TYC 8998-760-1 c. The discovery, published in the Astrophysical Journal Letters on Wednesday, is a significant one for planet hunters: It’s the first time multiple planets have been directly imaged orbiting a star similar to our sun.”

More from The Guardian: “The first active leak of methane from the sea floor in Antarctica has been revealed by scientists. The researchers also found microbes that normally consume the potent greenhouse gas before it reaches the atmosphere had only arrived in small numbers after five years, allowing the gas to escape. Vast quantities of methane are thought to be stored under the sea floor around Antarctica. The gas could start to leak as the climate crisis warms the oceans, a prospect the researchers said was “incredibly concerning”.”