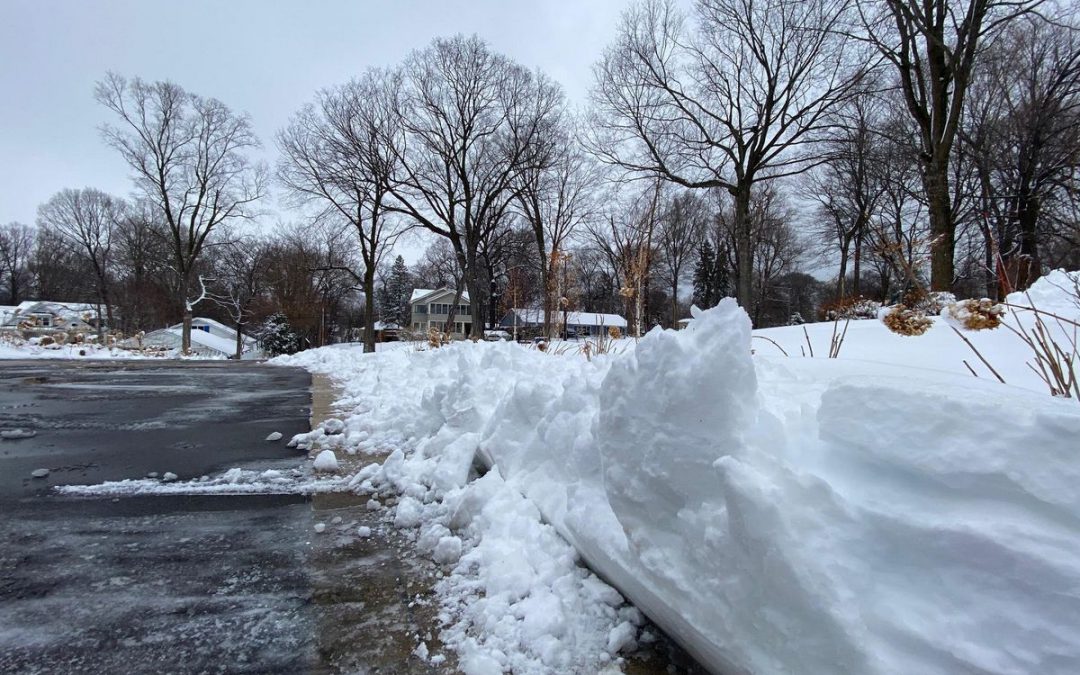 March Weather Has Something For Everyone

March is a month of wild extremes. Tell that to residents of Mankato, where a cool foot fell Monday. Cheyenne, Wyoming is digging out from a record 31 inches of snow, with 4 foot drifts downtown!

Meanwhile a September-like sun angle is heating up the southern USA, brewing up conditions ripe for a major tornado outbreak today from Little Rock to Birmingham.

Tornadoes in “Dixie Alley” are especially problematic for 3 reasons: many strike at night when people are sleeping. Hills make it harder for spotters to confirm touchdowns, and fewer people have underground shelters. A lingering La Nina cool phase in the Pacific has heightened the risk of an especially damaging tornado season.

Minnesota temperatures mellow into the weekend with daytime highs topping 50F Friday and Saturday. 60F Sunday may leave a little spring in your step. Snow on the ground will melt rapidly in coming days.

A southern storm pushes rain into town Monday and Tuesday, possibly plowable snow near Duluth. Ah, the joys of March.

Nuisance Precipitation. Most of the rain and snow tracks south of Minnesota today, but a weak trough of low pressure pushing north may spark flurries and sprinkles from time to time.

March Precipitation Tracking Above Average for Much of Minnesota. Northern Minnesota and the Red River Valley is still trending drier than average, but we are in a wetter pattern. The question is whether the rains will fall once frost leaves the ground in April?

A Mellowing Mother Nature. Temperatures trend upward into Sunday, when the mercury may brush 60F close to the Twin Cities. Temperatures should be mild enough for rain early next week, but another brush with (heavy) slush is possible north, from Duluth into the Arrowhead.

A Guy Can Dream. 60F on Sunday seems do-able, but a few 70s as we end March? That seems like a cruel and premature April Fool’s Joke, but we will see. Temperatures continue to run well above average for the next 1-2 weeks.

Don’t Rule Out a Few More Wintry Slaps. Nothing subzero, I think that ship has sailed, but more days in the 30s and 40s in April with a nagging potential for slush? Recent Aprils have brought significant snow. Last year was an exception, but we’re not really out of the woods until The Fishing Opener. OK, maybe Memorial Day?

Next System In The Central U.S. As another system moves out of the Southwest into the Central United States the next few days, we will be monitoring several weather impacts across the southern states. Today, strong storms will be possible, particularly from Kansas to Texas, with heavy snow moving in behind it from Colorado and southern Kansas into the Texas Panhandle. As the low continues to move eastward, a widespread severe threat is expected Wednesday into Wednesday Night from the mid-Mississippi Valley into the Southeast, with large hail, damaging winds, and some strong tornadoes. The severe threat will continue in the Carolinas and Georgia Thursday.

Winter Weather Concern. This system will bring some heavy snow for portions of Colorado, New Mexico, Kansas, Oklahoma, and Texas today into Wednesday. In some areas of southern Colorado, up to 10” of snow could fall. Very strong wind gusts of 60-65 mph will also produce reduced visibility and difficult travel conditions. Some locations under alerts include:

Wednesday Severe Threat. While there is the threat of severe weather today from Kansas to Texas, stretching east into the Deep South, the severe weather threat will greatly ramp up across the Deep South on Wednesday. A MODERATE Risk of severe weather (threat level 4 of 5) is in place from central Arkansas into southwestern Tennessee, northern/eastern Mississippi, and a good portion of Alabama. This threat includes Little Rock, Memphis, Birmingham, Montgomery, and Tuscaloosa. Large hail, damaging winds, and several strong tornadoes are possible, particularly from the afternoon to the overnight hours.

Tornado Threat. A good portion of both the Enhanced and Moderate Risks of severe weather will have a substantial tornado risk on Wednesday, with several strong tornadoes possible. The tornado threat will be on the increase through the afternoon hours, continuing overnight.

Hail Threat. Storms will also contain a hail risk, particularly across portions of southern Missouri, western Tennessee, northeastern Arkansas, and northern Mississippi, where the threat of 2”+ diameter hail will be greatest.

Wind Threat. Storms will also be capable of widespread damaging winds across the entire severe threat area on Wednesday.

Thursday Severe Threat. The severe threat will continue to move east for Thursday, with an Enhanced Risk of severe weather (threat level 3 of 5) in place across the Carolinas and Georgia. This could be another day with a widespread and potentially significant severe weather threat, with hail, damaging winds, and strong tornadoes possible. While some storms will be possible in the morning hours, the greatest threat will be later in the day.

10 Hazard Alerts You Might Not Know About. And not want to know about, I suspect. Capital Weather Gang runs down a few alerts that might fill you with dread, including Radiological Hazard Warnings: “…While neither a natural hazard nor issued by the Weather Service, the radiological hazard warning is transmitted by the Weather Service. Moreover, the Weather Service’s forecasts of wind conditions, which affect how such substances are dispersed through the air, may be instrumental in determining when and where to issue it. It’s exactly what it sounds like — “a warning of the loss, discovery, or release of a radiological hazard,” writes the Weather Service. The agency goes on to list examples of what could trigger its issuance, including “the theft of a radioactive isotope … the discovery of radioactive materials, a transportation accident which may involve nuclear weapons,” etc...”

From Remote Work to Hybrid Work: The Tech You’ll Need to Link Home and Office. Joanna Stern writes for The Wall Street Journal (paywall); here’s an excerpt: “…Welcome to the exciting new world of hybrid work. “Somewhere in the vicinity of 60% of the workforce are choosing the hybrid option,” said Gartner analyst Suzanne Adnams, “which means their ideal is working at home and coming into the office three days a week.” If I had a dollar for every time I heard “two to three days at the office” while reporting this column, a socially distanced steak dinner would be on me. What isn’t as clear? Where you’ll go once you get to the office. That depends on your employer. Here are three possible options…”

Walrus Spotted in Ireland for First Time After Falling Asleep on Iceberg. I mean, who among us hasn’t done something similar? Mental Floss has details: “Residents of the island nation of Ireland are familiar with marine life, but they’re not used to seeing anything like the creature that recently paid a visit to their home. As Independent.ie reports, locals recently spotted a walrus off Valentia Island, marking the first walrus sighting ever recorded in the country. Alan Houlihan and his 5-year-old daughter Muireann were the first people to notice something large swimming off Glanleam Beach in Kerry on the morning of March 14. When the animal hauled itself onto the rocks, they saw that it was a walrus…”

3” snow on the ground at MSP Tuesday morning.

March 17, 2012: The Twin Cities hits 80 degrees, a new record for St. Patrick’s Day and the warmest temperature during the warmest March on record. Amazingly, the high also reached 79 on March 16, 18, and 19 this year.

Tiny Town, Big Decision: What Are We Willing to Pay to Fight the Rising Sea? Here’s an excerpt from a story at The New York Times (paywall): “…The risk to tiny Avon from climate change is particularly dire — it is, after all, located on a mere sandbar of an island chain, in a relentlessly rising Atlantic. But people in the town are facing a question that is starting to echo along the American coastline as seas rise and storms intensify. What price can be put on saving a town, a neighborhood, a home where generations have built their lives? Communities large and small are reaching for different answers. Officials in Miami, Tampa, Houston, San Francisco and elsewhere have borrowed money, raised taxes or increased water bills to help pay for efforts to shield their homes, schools and roads...”

Pandemic Lockdowns Improved Air Quality in 84% of Countries Worldwide, Report Finds. CNN.com summarizes the finding: “Coronavirus lockdowns led to air quality improvements in most countries, but the level of pollutants will likely rise as governments lift restrictions and economies swing back into gear, according to a new report. IQAir’s 2020 World Air Quality Report said human-related emissions from industry and transport fell during lockdowns, and 65% of global cities analyzed experienced better air quality in 2020 compared to 2019. Some 84% of nations polled reported air quality improvements overall. “The connection between Covid-19 and air pollution has shone new light on the latter, especially as many locations have observed visibly cleaner air — revealing that air quality improvements are possible with urgent, collective action,” the report said...”

Satellite Images Show Air Pollution Returning to Pre-Pandemic Levels as Restrictions Loosen. I guess you could see that coming. CNN.com has an update.

Climate Change Causing Mental Health Crisis: Climate Nexus has headlines and links: “Climate change, and the lack of aggressive action to limit the heating of the planet, is causing mental health crises in the U.S. and around the world, the Arizona Republic reports. Stress related to climate change affects close to half (47%) of Americans 18 to 34, and 57% of teenagers. The detrimental mental health impacts can be related to acute events, such as a hurricane, as well as what mental health professionals call “anticipatory grief” for the damaged world children will inherit. Research has linked climate change to increased rates of suicide and depression in Inuit communities in the Arctic, and widespread existential anxiety in Maldivian children. “We can learn a bit from the literature on environmental disasters, where we see there are clear linkages with PTSD and other traumatic responses,” Sabrina Helm, who grew up “mortally afraid of nuclear disasters” as a child in Cold War Germany, told The Republic. “I was convinced when I was 15 that I would probably not reach adulthood. It was constantly in the news. It was so threatening. It’s exactly what we see now with climate change.” (Arizona Republic)

Wary US Farmers Weigh Up Joining Joe Biden’s Climate Fight. Thomson Reuters Foundation has a worthwhile post; here’s an excerpt: “…Agricultural production accounts for approximately 10% of climate-changing emissions in the United States – and those will need to fall if the nation is to meet its pledge of net-zero emissions by 2050. Vilsack plans to give farmers incentives to make the cuts using subsidies from the USDA’s Commodity Credit Corporation (CCC), a $30-billion-a-year fund that President Trump tapped into to support farmers hit by trade wars he launched. Reductions could come from changes like farming more efficiently, using more renewable energy and better protecting soils so they store more carbon. But Biden’s team will need to persuade farmers, most of whom do not support him politically, of the benefits of making the shifts…”