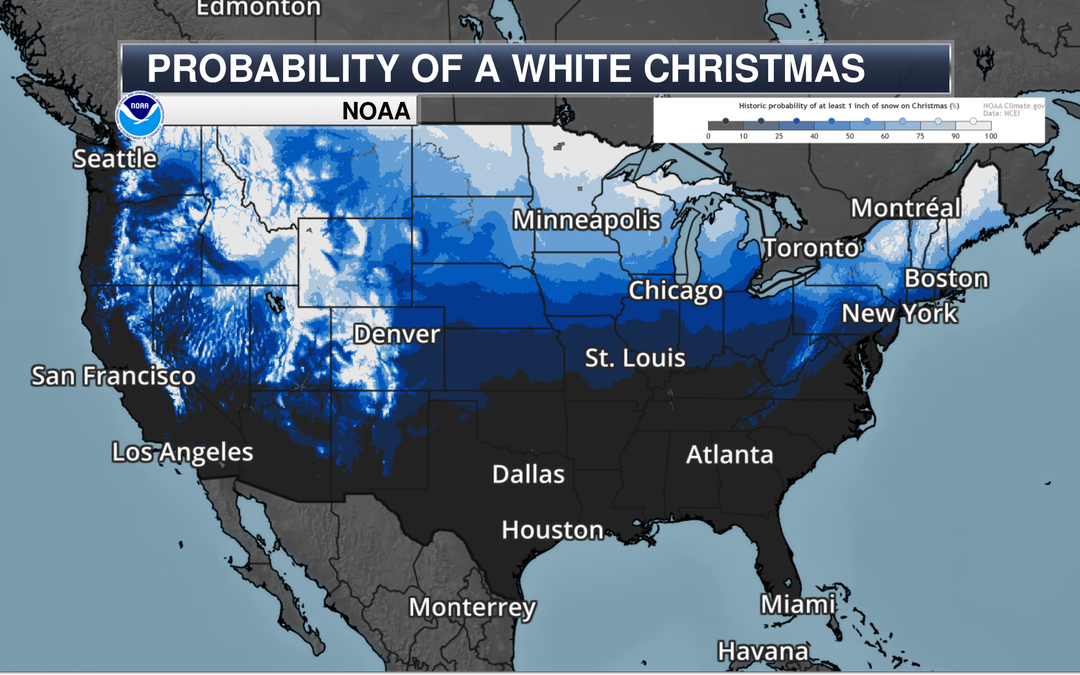 Historical Probability Of A White Christmas

With the new 1991-2020 climatological data in place, the probability of a white Christmas map has been updated! Here’s a look nationwide at that probability, and you can view an interactive map to see your local probability by clicking here. Remember a white Christmas is classified as there being at least 1” of snow on the ground.

A mess of weather will continue out in the western United States as we head through Thursday with rain and snow and even a few thunderstorms. We will also be tracking some snow and mixed precipitation from northern Minnesota to the Great Lakes and into portions of the Northeast.

Several feet of snow are expected to accumulate through Christmas Eve across the Cascades, Sierra, and into the northern Rockies. Meanwhile, over 3” of rain could fall along portions of the West Coast and in the Sierra at lower elevations that don’t change over to snow.

A record 20.73 inches of rain fell in a day during extreme Tennessee floods, report shows

More from the Nashville Tennessean: “A record-shattering 20.73 inches of rain fell in 24 hours in Humphreys County, triggering extreme floods that killed 20 people on Aug. 21, officials said. The National Weather Service Nashville confirmed the total on Monday. Early estimates topped out rainfall at 17.03 inches in Humphreys County that day, but further investigation into a measurement at a wastewater treatment plant in McEwen revealed the new record-high total, NWS meteorologist Krissy Hurley said. She also said it is the highest 24-hour rainfall record for any state not touching an ocean.”

More from NBC News: “A 66-million-year-old fossil of a complete baby dinosaur in its egg, apparently just a few days before it would have hatched, shows the remarkable similarities between theropod dinosaurs and the birds they would evolve into, according to a study published Tuesday. The fossilized bones of the embryo, named “Baby Yingliang” after the museum in southern China where it was discovered, can be seen curled up inside its 6-inch elongated eggshell and looking almost exactly like a modern bird at that stage, although it has tiny arms and claws rather than wings. Fion Waisum Ma, a paleontologist at the University of Birmingham in the United Kingdom, said the head is particularly striking in its similarity to the head of a newly hatched bird — a resemblance heightened by a beak that was a feature of the dinosaur species, called oviraptorosaur. Ma is one of the lead authors of the fossil study published in the journal iScience. Scientists from China, Canada and elsewhere in the U.K. were also involved.”

‘We really don’t have a plan’: Biden’s climate promises are sunk without Build Back Better, experts say

More from CNN: “Multiple independent analyses have found President Joe Biden simply can’t hit his goal of cutting greenhouse gases by 50% by the end of the decade without the clean energy provisions in Build Back Better, the President’s signature economic and climate legislation. After West Virginia Sen. Joe Manchin torpedoed the bill, experts say these goals are ever more out of reach — with devastating consequences. “Without this bill we really don’t have a plan to tackle the climate crisis in the US,” said Leah Stokes, a senior policy adviser at Evergreen Action and climate expert at the University of California, Santa Barbara. “Cutting carbon pollution 50-52% is a really big goal, it’s what’s necessary, but it’s not going to happen without significant federal investments.””