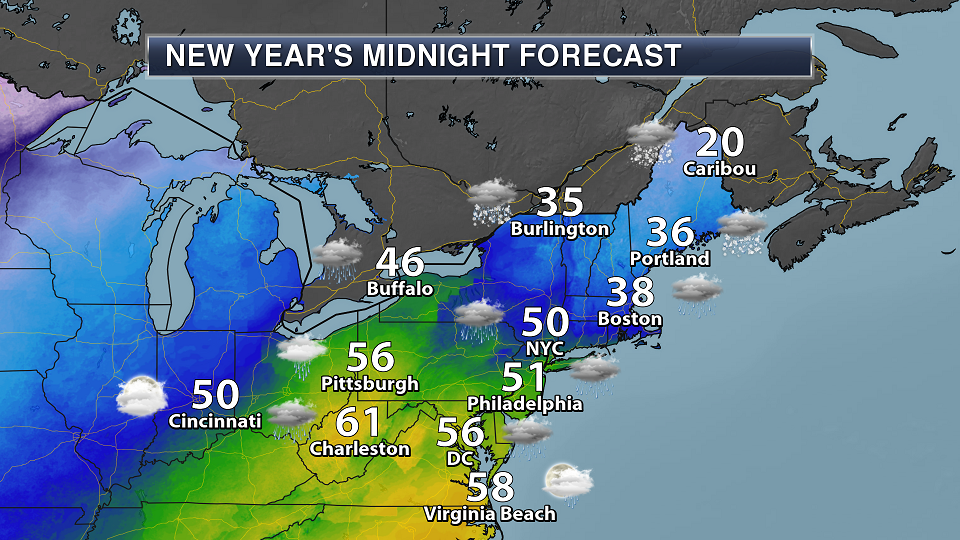 As we head through the last day of 2018 – New Year’s Eve – snow will be possible from the Four Corners region into the Upper Midwest and western Great Lakes, with an area of light freezing rain possible from Nebraska and Iowa into Minnesota and Wisconsin. An area of low pressure will bring widespread showers and storms from the central and southern Mississippi Valley eastward to the East Coast. Some snow will also be possible in parts of New England.

That area of low pressure moving through the central U.S. New Year’s Eve will bring the potential of 1-2″ of rain along with it. Over a half an inch of liquid precipitation is also possible in the Northeast through Tuesday evening.

Three areas of the lower 48 could see at least 6″ of snow through Tuesday evening: across the western U.S. mountains, along the south side of Lake Superior, and in parts of northern and western Maine.

Here’s a look at temperatures for the start of the New Year Monday Night across the Northeast. Temperatures in New York City are likely to be around 50F, but it looks like it will be rainy for those celebrating in Times Square.

If the midnight temperature is 50F in Central Park, it would tie for the the fourth warmest temperature for the Ball Drop on New Year’s Eve since 1907.

Who is vulnerable to the impacts of tropical cyclones and why?

More from AGU: “Tropical cyclones, and the torrential rains and strong winds these storms bring along with them, threaten coastal communities around the world and are expected to increase in intensity due to climate change. But not every tropical cyclone becomes a natural disaster and not every natural disaster results in human fatalities. Whether or not a natural hazard, such as a tropical cyclone, becomes a natural disaster depends on whether the hazard overwhelms existing human infrastructure in a particular country or region. But when does a natural disaster result in fatalities? New research presented at the 2018 American Geophysical Union Fall Meeting in Washington, D.C. suggests that at the country level, how effective the national government is, along with how much exposure to the natural hazard a particular region or community faced, are both important factors in answering this question.“

More from Climate Liability News: “The Ninth Circuit Court of Appeals has granted a petition by the Trump administration for a rare pre-trial appeal in the landmark constitutional climate lawsuit, Juliana v. United States. The appeals court agreed to the interlocutory appeal, which leaves the future progress of the case unclear. Generally, interlocutory appeals consider certain aspects of a case while allowing other issues to proceed. The young plaintiffs in the case, 21 young people from around the country, have asked District Court Judge Ann Aiken to clarify how the case will move forward while the Ninth Circuit considers its appeal. They argue that they should be allowed to continue the discovery process and other pre-trial proceedings. The Ninth Circuit’s decision came as somewhat of a surprise because it had denied repeated attempts by the government to short-circuit the case before trial. A three-judge panel voted 2-1 to grant this request, while denying other motions, including the government’s fourth writ of mandamus request. The writ of mandamus is even rarer than an interlocutory appeal because it requires the higher court to decide the lower court clearly abused its judicial power. But granting the interlocutory appeal still throws the case into uncertainty.“

More from ScienceDaily: “The climate is not only warming, it is also becoming more variable and extreme. Such unpredictable weather can weaken global food security if major crops such as wheat are not sufficiently resilient — and if we are not properly prepared. A group of European researchers, including Professor Jørgen E. Olesen from the Department of Agroecology at Aarhus University, has found that current breeding programmes and cultivar selection practices do not provide the needed resilience to climate change. – The current breeding programmes and cultivar selection practices do not sufficiently prepare for climatic uncertainty and variability, the authors state in a paper recently published in PNAS (Proceedings of the National Academy of Sciences). Not only that — the response diversity of wheat on farmers’ fields in most European countries has worsened in the past five to fifteen years, depending on country. Researchers predict that greater variability and extremeness of local weather conditions will lead to reduced yields in wheat and increased yield variability.“