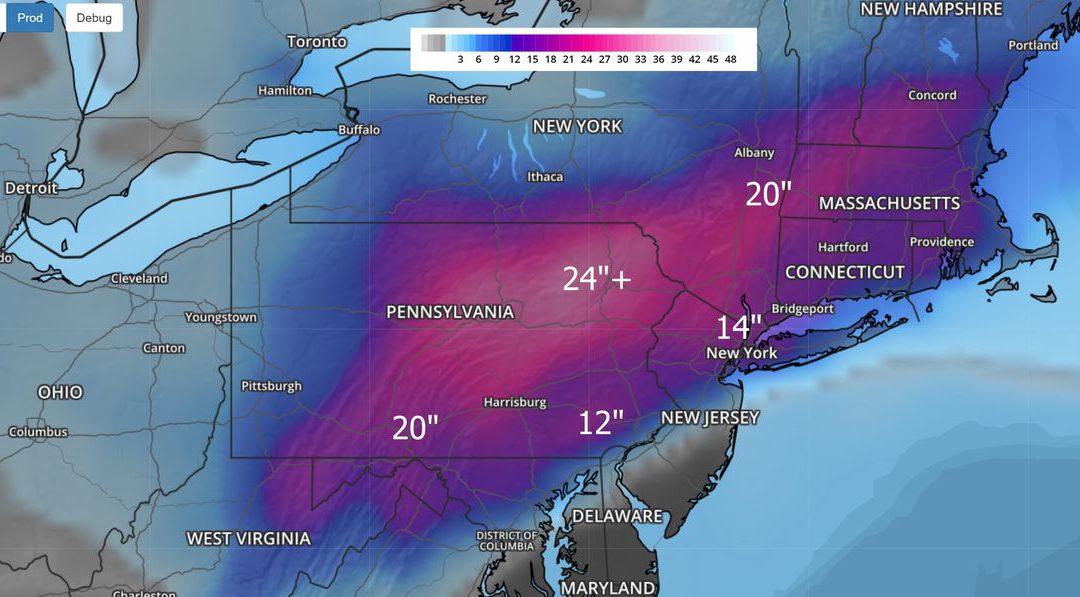 Minnesota won’t win the Snow Lotto anytime soon. That distinction goes to Pennsylvania, where up to 30 inches may pile up by Thursday. Over a foot of snow may plaster New York City, far more than the 4.8 inches that fell all last winter.

The European model is hinting a few inches north of MSP next Wednesday, ahead of much colder air which will leave us shivering on Christmas, but from the MSP metro on south a white Christmas is still a stretch. Not impossible, but unlikely.

Santa will have a tailwind.

Christmas highs may be stuck in single digits and teens in spite of a pleading sun. A Pacific breeze resumes with a post-Christmas thaw likely.

Why the extended snow drought? Blame a split flow; a stormy southern branch of jet stream winds spinning up big storms for the south and east coast, while a northern branch keeps numbing air bottled up to our north.

We’re in a meteorological no-fly zone. But…January is coming.

So Far: A Moderate Winter Season for the Twin Cities. But average at St. Cloud and severe in Duluth, according to The Midwest Regional Climate Centers Accumulated Winter Season Severity Index (AWSSI): “Winter seasons have significant societal impacts across all sectors ranging from direct human health and mortality to commerce, transportation, and education. The question “How severe was this winter?” does not have a simple answer. At the very least, the severity of a winter is related to the intensity and persistence of cold weather, the amount of snow, and the amount and persistence of snow on the ground. The Accumulated Winter Season Index (AWSSI) was developed to objectively quantify and describe the relative severity of the winter season…”

A Thorough Thrashing. 20-30”+ inches of snow for parts of Pennsylvania and northern New Jersey? That’s like an entire season of snow falling in 24 hours. I expect power outages and general disruption for this region through the end of the week.

Another Thaw Looming. Some are depressed, others thrilled about this extended state of meteorological limbo. Temperatures mellow a bit into early next week, when readings will be 10-20F above average again before falling off sharply the latter half of next week, just in time for Christmas.

Christmas Correction. Increasingly, both ECMWF and GFS show temperatures going over a small cliff just in time for Santa’s arrival. Daytime highs on December 25 may be in single digits or teens before yet another post-Christmas thaw.

Glancing Blows of Numbing Air. A building ridge of high pressure over western Canada may force colder air southward into Minnesota and the eastern two-thirds of the USA, but I see no sign (yet) of a prolonged period of polar chill, although it’s almost certain we’ll see periods of much colder weather in January.

Probability of Exceeding Winter Storm Warning Criteria. Pretty much a slam dunk for much of the Mid Atlantic and southern New England. Click here for the latest.

Lingering La Ninas May Help Forecasters Spot Costly Weather Patterns Two Years Away. Capital Weather Gang explains how longer-lasting cooling phases in the Pacific may give meteorologists some insight into the probability of events such as drought and hurricane intensity over the long term: “…La Niña is also inspiring a growing set of researchers to look beyond the traditional limits of seasonal prediction. That’s because La Niña tends to hang around longer than El Niño, often returning or restrengthening for a second or even a third northern winter. That asymmetry points to the potential for outlooks that may — at least in some years — extend well beyond the one-year limit of standard practice. Such forecasts could give more than a year’s notice of the likelihood of impacts such as a drought or enhanced hurricane activity...”

Wildfires Blast Smoke Corkscrews to the Top of the Atmosphere. A story at Scientific American caught my eye: “Record-breaking wildfires in Australia at the start of the year caused an extraordinary weather phenomenon. They spawned a spree of towering fire-induced thunderclouds, which catapulted smoke 20 miles into the atmosphere. Almost 12 months later, some of that smoke is still drifting around the planet. These “pyrocumulonimbus” events, or “pyroCbs,” are impressive but not uncommon. They form when the heat from a wildfire strengthens currents of rising air in the atmosphere, generating large storm clouds and sending smoke spiraling skyward…”

Should We Give Snowplows Names? I think Scotland has the right idea (grandpa: what’s a snow plow?) If you need a smile check out the Gritter Tracker 2020: “One of Scotland’s great winter traditions has returned with the country’s hilariously named gritters hitting the roads. Every year the combination of frigid temperatures, festive cheer and unique Scottish humour sees the country’s gritter drivers nickname their vehicles, from Yes Sir Ice Can Boogie to License to Chill.Best of all, Scots concerned about the road conditions, or simply keen to track their favourite gritter can do so at the Traffic Scotland website…”

How Scientists Installed the World’s Highest Weather Station on Mt. Everest. Wow. I wouldn’t want to have to service it. The Guardian has the post: “What is the weather like up on Mount Everest today? Last year a bunch of daredevil scientists and Sherpas laboured in the “death zone” and installed the world’s highest weather station, perched at 8,430 metres, just 400 metres short of Everest’s summit. But it nearly didn’t happen. Having been stuck behind a queue of climbers heading for the summit, the 2019 National Geographic and Rolex expedition team were dangerously cold when they reached the location where the station was to be installed…”

December 16, 2000: A surface low pressure system tracks east-northeast through Iowa on the 18th and then into western Illinois during the early evening hours. Extreme south central and southeast Minnesota received 6 to 10 inches of snow, including Albert Lea with 10.5 inches, Kiester and Bixby with 6.0 inches.

December 16, 1972: Fairmont has its fifteenth consecutive day with lows at or below zero degrees Fahrenheit.

December 16, 1940: A snowstorm hits much of Minnesota. Water equivalent of the snow was 1.27 inches at Winona.

2020 Likely to End Up Hottest Year on Record. I daresay I see a trend here. NBC News has a summary: “NOAA’s calculations show that the first 11 months of 2020 were .02 degrees cooler than record-hot 2016, but there’s a 55 percent chance that 2020 will end up the warmest on record. If December is as much above normal as November was, then 2020 will at least tie 2016 as the warmest on record, Sanchez-Lugo said. Florida, Virginia and Maryland so far have had their hottest year on record, while California had its hottest fall. For its part, NASA said 2020 so far is the warmest on record and it’s likely to stay that way…”

Exxon Mobile Pushes New Climate Change Plan as Investors Rebel. CNBC.com has the story: “A week after multiple activist investor groups targeted Exxon Mobil for recent financial underperformance as well as climate change concerns, the oil giant has released a new five-year plan to reduce greenhouse gas emissions. The company stressed that the plan has been in the works for months — its previous five-year plan through 2020 is drawing to a close — but it also noted in outlining new carbon goals that the plan ″includes input from shareholders.” Whether Exxon Mobil’s new attempt to address a lower-carbon future will satisfy shareholders likely depends on what a shareholder already expected of the company…:

Atlas Reveals Climate Change Is Pushing Birds Farther North. A study highlighted at WIRED.com (paywall) caught my eye: “Europe’s breeding bird populations have shifted on average 1 kilometer north every year for the past three decades, likely driven by the climate crisis, according to one of the world’s largest citizen science projects on biodiversity. The European Breeding Bird Atlas 2 (EBBA2) provides the most detailed picture yet of the distribution of the continent’s birds, after 120,000 volunteers and field-workers surveyed 11 million square kilometers, from the Azores in the west to the Russian Urals in the east. The book documents changes in the range of Europe’s 539 native bird species in the 30 years since the first EBBA, which was published in 1997 but was based on observations from the 1980s. It shows that since the first study, each population can be found around 28 kilometers further north…”