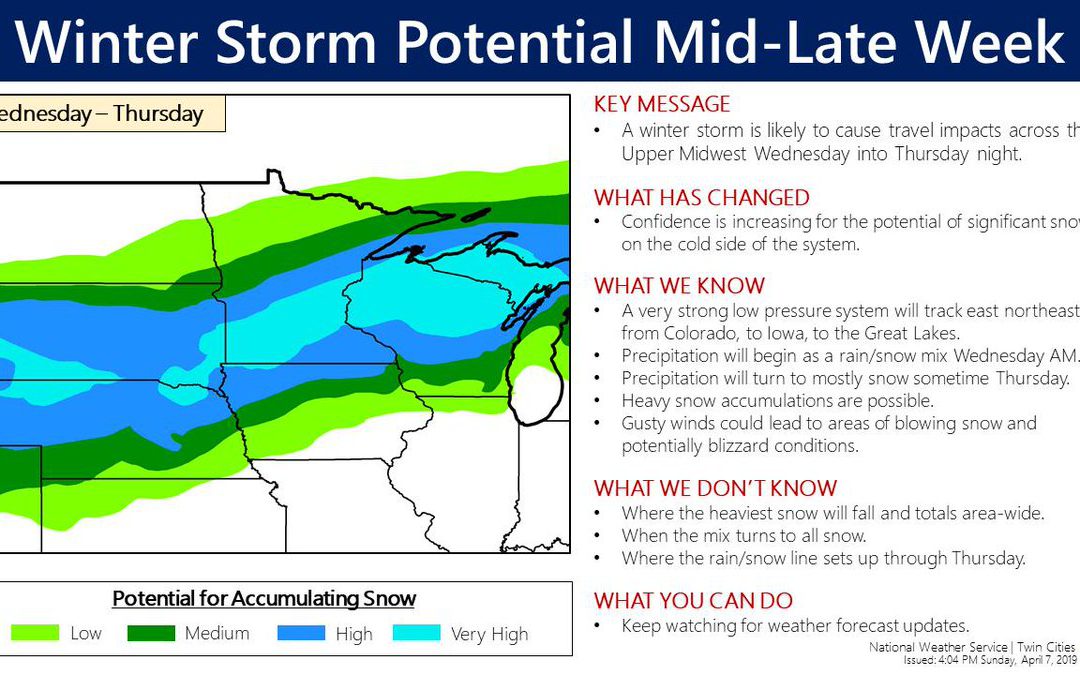 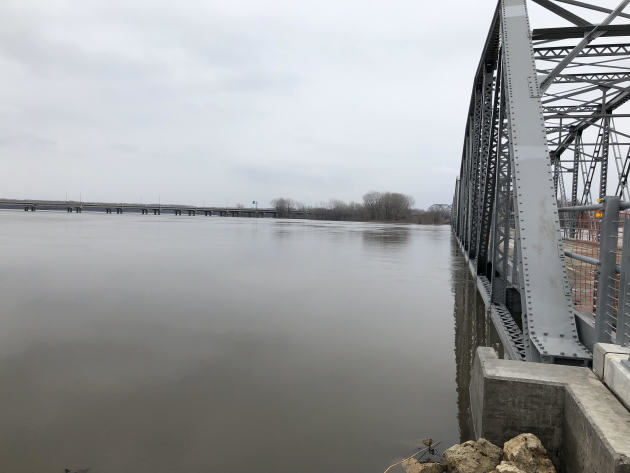 River flooding has continued to greatly impact parts of the upper Midwest over the past few days. Saturday I stopped by the Old Cedar Avenue trail head the for the Minnesota Valley National Wildlife Refuge in Bloomington, MN, and snapped a few pictures of the ongoing flooding. The water was still up to the bottom of the bridge, but had receded from the parking lot area, which had been closed earlier in the week according to the latest flooding information from the U.S. Fish and Wildlife Service. 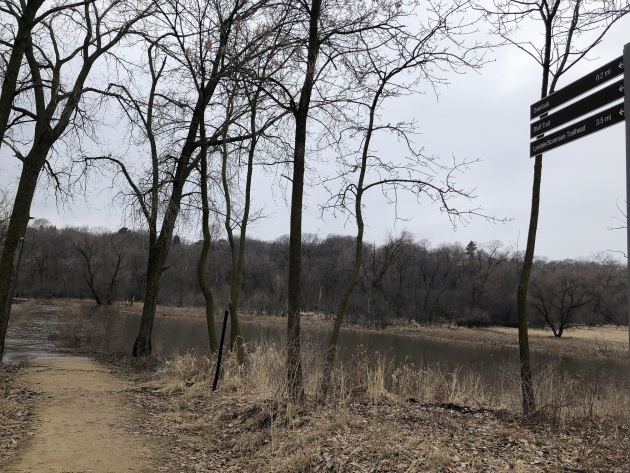 There was no way I was getting to that overlook, as the path was a little bit underwater! 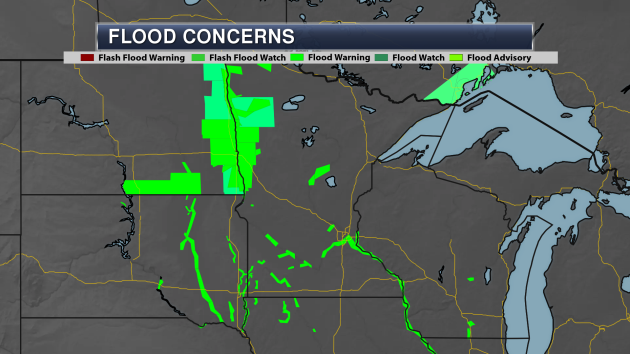 We continue to see numerous river flood warnings across parts of southern and northwestern Minnesota due to the ongoing river flooding across the region. 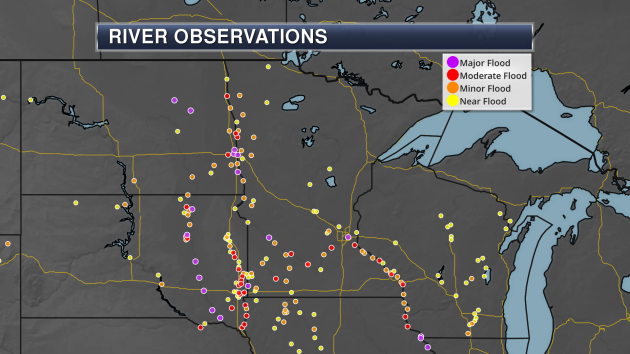 As we take a look at the river observations across the region, numerous river gauges along the Minnesota and Mississippi Rivers continue to be in flood stage. We are also seeing the same occurring along the Red River. 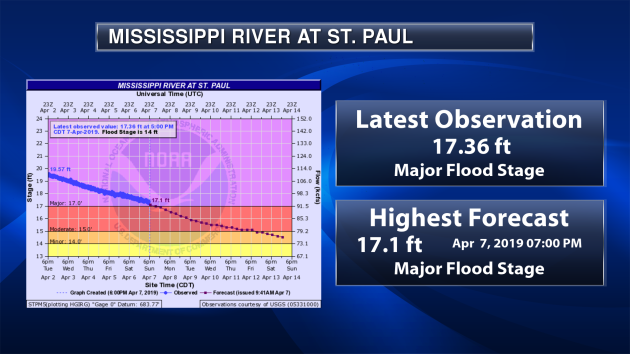 Taking a look at select river forecast points, the Mississippi River at St. Paul continues to recede from its crest and will fall into minor flood stage late this week. 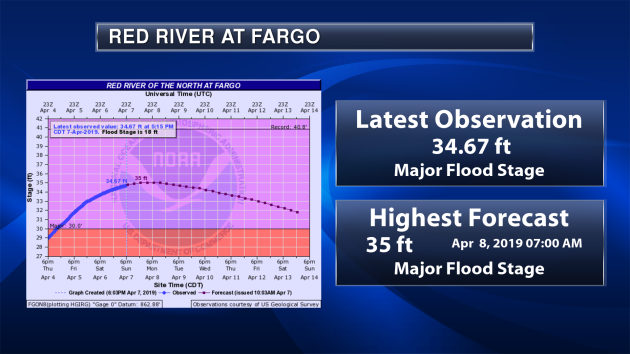 As we head north, the Red River at Fargo is expected to crest around 35 feet early Monday, marking what would be a top ten crest if it did reach that level. The river will slowly start to recede this week, but remain in major flood stage through at least next weekend. 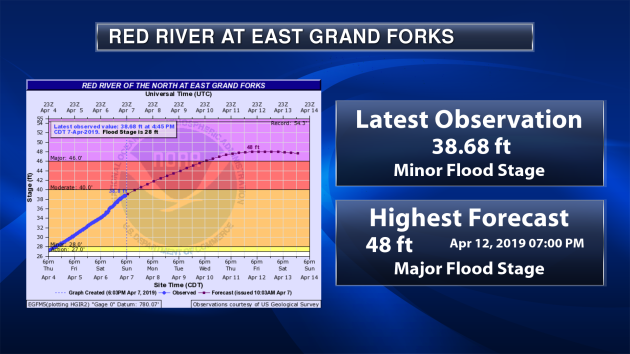 Further upstream the Red River at East Grand Forks the river is expected to cross into moderate flood stage Sunday night and then into major flood stage late Wednesday. A crest of 48 feet is expected midday Friday before the river slowly starts to go back down. If the river did reach 48 feet, it would be tied for the 6th highest crest on record. 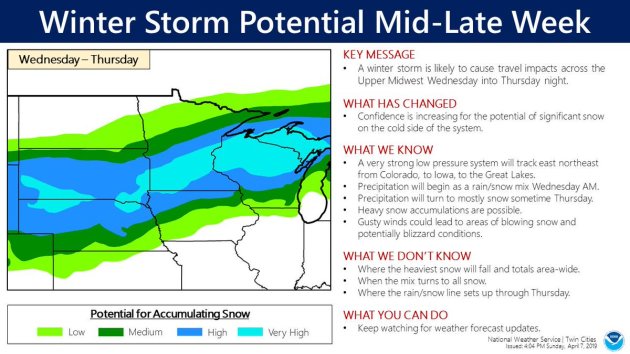 Old Man Winter just doesn’t want to give up the ghost on the 2018-19 season. A strong system is expected to move into the mid-section of the nation during the middle and end of the week, and a swath of heavy snow could fall on the north and northwest side of the system. Blizzard conditions could also be possible due to strong winds. While it is too early for many specifics, it does appear that this could impact the upper Midwest. This is a system to keep an eye on over the next several days, as it is likely that there could be major impacts somewhere in the upper Midwest. 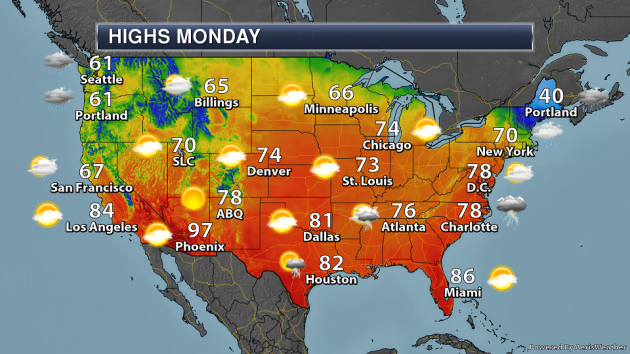 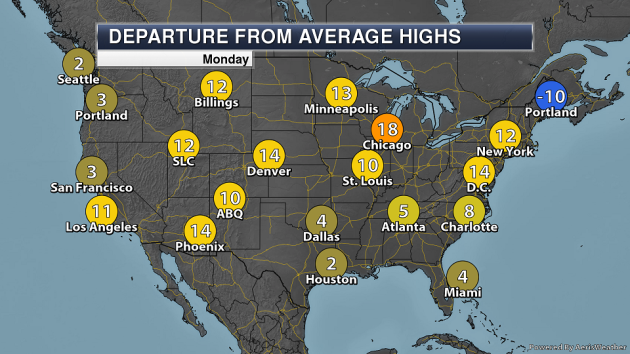 On Monday, a system working east across the country will bring rain and storms from the lower Mississippi Valley into the Northeast. Heavy snow will be possible in northern New England, especially across parts of Maine. A weak system will bring some light rain to parts of the Great Lakes. Meanwhile, moisture will continue to stream into the Northwest, producing rain and higher elevation snow. Highs across most of the nation will be above average. 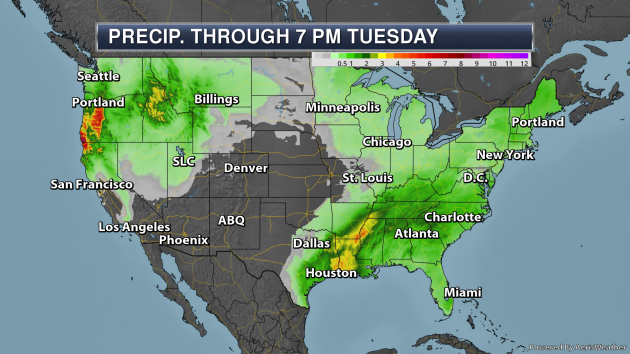 Through Tuesday evening, two areas of heavy rain is expected to fall across the nation. The first will be across parts of the lower Mississippi Valley into the Ohio Valley and Mid-Atlantic, where at least 1-3″ of rain is expected. The second is across the Northwest with that plume of moisture. Some locations in the Pacific Northwest could receive over 4″ of rain. 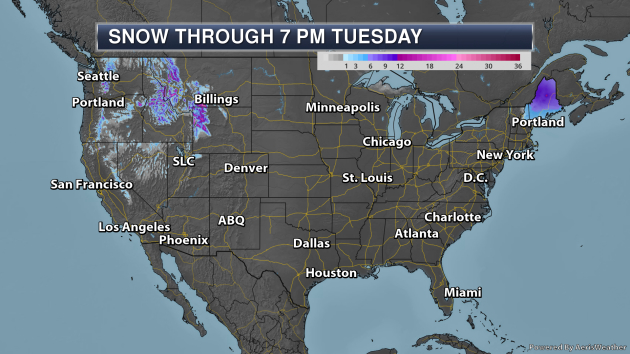 Through Tuesday evening, parts of Maine could see up to 10″ of snow. Meanwhile, feet of snow will be possible in some of the higher elevations in the Northwest.

More from Popular Mechanics: “Solar wind isn’t really wind. Wind is moving air, and there’s no air in space. In preparation for a NASA probe heading towards the sun to study the still-mysterious phenomena, an Italian space physics Ph.D. student has gone back and analyzed some of the Agency’s previous looks at solar wind and found himself on a historic research trail that dated back to the 1970s, studying giant radioactive blobs from the sun.  Some background: last year, NASA launched the Parker Space Probe, which in 2025 should become the closest man-made object to the sun in history. The previous record was set by Helios 2, one in a pair of probes NASA launched in 1974, which reached its point of study in 1976.”

More from the National Parks Traveler: “When your snowfall through early April is more than 150 percent of normal, you know you’ve got a long way to go before summer. At Sequoia and Kings Canyon national parks in the High Sierra of California, that snowpack, and a good number of hazardous trees, means there will be some delays in opening facilities.  Recent snow surveys show that the snowpack in Sequoia and Kings Canyon is 153 percent of normal. There are areas that still have 6-10 feet of snow in early April. Another result of the recent drought is the large number of hazard trees in the campgrounds and parking areas that usually open in April or early May.”

More from Earther: “Midwestern states better buckle up because a new bad guy’s in town. I’m not talking about any gun-toting cowboys, though. I’m talking about corn.  A study published Monday in Nature Sustainability shows how deadly this crop can be. And eating it isn’t the killer; growing it is. Turns out that the air pollution from growing corn is behind an estimated 4,300 premature deaths a year.  Growing corn results in emissions of particulate matter, a dangerous pollutant that is so small it winds up in your lungs when inhaled and can even affect your heart. This forms from the ammonia, sulfur oxides, nitrogen oxides, and volatile organic compounds released during fertilizer and manure application, the use of farm machinery (like tractors), and dust from ploughing and planting. The fertilizer and manure are the real culprits here, though: They account for 71 percent of the researchers’ corn-attributed deaths.”