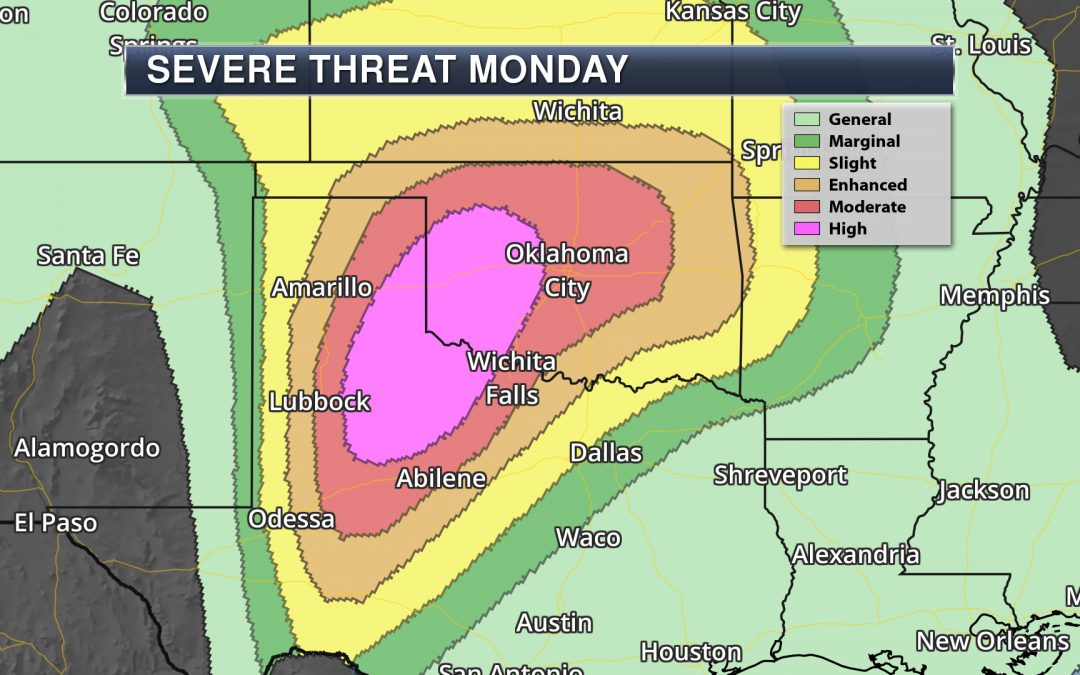 This is a sample of the briefing we sent to our clients on Monday, May 20th, 2019, on the high risk of severe weather and flash flooding across the Southern Plains.

Learn About Our Corporate Weather Briefings

Timing Storms. Two rounds of storms are expected across the Southern and Central Plains today. The first is already ongoing this morning (with those Severe Thunderstorm Watches in place) – those storms will continue to move across parts of the Texas Panhandle, with more storms developing near the warm front in Oklahoma. These storms will be initially capable of large hail/damaging winds and later this morning could bring the first tornado threat to the region. As these storms push into Kansas, large hail and damaging winds will become the main threat. The second round of storms is expected to develop late this afternoon across parts of Texas and Oklahoma, capable of tornadoes and very large hail. During this time period, there could certainly be some long-tracked, strong tornadoes across the region. These storms will eventually merge into a line as we head into the overnight hours, capable of widespread damaging winds of at least hurricane-force.

HIGH Severe Weather Risk Today. With a tornado outbreak expected across parts of Texas into western Oklahoma later today, a HIGH risk of severe weather has been issued for the first time in two years. This High Risk area includes Lawton, Altus, El Reno (OK) as well as Snyder and Vernon (TX) and is surrounded by a Moderate risk area including Oklahoma City and Tulsa (OK), as well as Lubbock and Amarillo (TX). Today is setting up to be a dangerous day across the Southern Plains, with not only tornadoes but very large hail and significant damaging winds possible.

Tornado Outbreak Expected. The High Risk of severe weather across parts of Texas and Oklahoma has been issued for the tornado threat that exists across the region today. The greatest risk of tornadoes will occur across parts of northwestern Texas and western Oklahoma, where a 30% probability of a tornado within 25 miles of a point is located – this includes cities like Lawton, Altus, El Reno (OK) as well as Snyder and Vernon (TX). A good portion of western/northern Texas into Oklahoma is also under a hatched/significant threat of tornadoes, indicating the potential of strong tornadoes (ones that could be at least EF-2 strength) and potentially long-tracked as well. That highlighted area includes Oklahoma City and Tulsa (OK), as well as Lubbock, Amarillo, and Abilene (TX).

Hurricane Force Winds Possible. Storms will be capable of damaging winds as well across parts of Texas and Oklahoma later today, especially during the evening and overnight hours. The hatched/significant area indicates at least a 10% probability of 74+ mph winds, and both the Norman, OK, National Weather Service office and the Storm Prediction Center have indicated that there will be the potential for 80+ mph winds in the strongest storms.

Very Large Hail As Well. We will also be watching the threat of very large hail later today, with the potential of baseball to softball sized hail reports. The Storm Prediction Center has the greatest likelihood of 2”+ diameter hail across parts of western Texas, the western half of Oklahoma, and far southern Kansas, indicated by the hatched/significant area. Some areas that are in this very large hail threat include Oklahoma City (OK), Lubbock, Amarillo, and Abilene (TX).

At Least 4-6” Of Rain. The rounds of storms over the next 24-36 hours will also produce lots of heavy rain across the Central and Southern Plains. Rainfall totals of at least 4-6” are currently expected, especially across parts of Kansas and Oklahoma, with isolated areas up to 10” possible.

HIGH Flash Flood Risk. This heavy rain – on top of recent heavy rains that have fallen in the region (the Weather Prediction Center notes past 14-day rainfall has been 200-300% of normal) – will lead to a potentially significant flash flood threat across this region. A HIGH risk of flash flooding is in place across parts of Oklahoma through tonight due to the rain potential. This indicates that widespread flash flooding is expected, with some significant flash flooding events possible. Between 2014-2017, Flash Flood High Risk Days accounted for 41% of flood-related fatalities and 92% of flood-related damages, so this flood threat should be just as concerning today as the severe weather outbreak is.

Flood Watches. Due to the heavy rain and flash flood potential, Flood and Flash Flood Watches are in place from northern Texas to southeastern Nebraska from today into Tuesday.

Potential Tropical Activity. While the Atlantic Hurricane Season doesn’t start until June 1st, we are already tracking an area several hundred miles southwest of Bermuda that could become a short-lived tropical or subtropical system in the next couple days. The National Hurricane Center is giving this area a 60% chance of formation in the next 48 hours as it drifts in the general direction of Bermuda. By Wednesday, the system will approach unfavorable conditions and eventually be absorbed by a cold front.