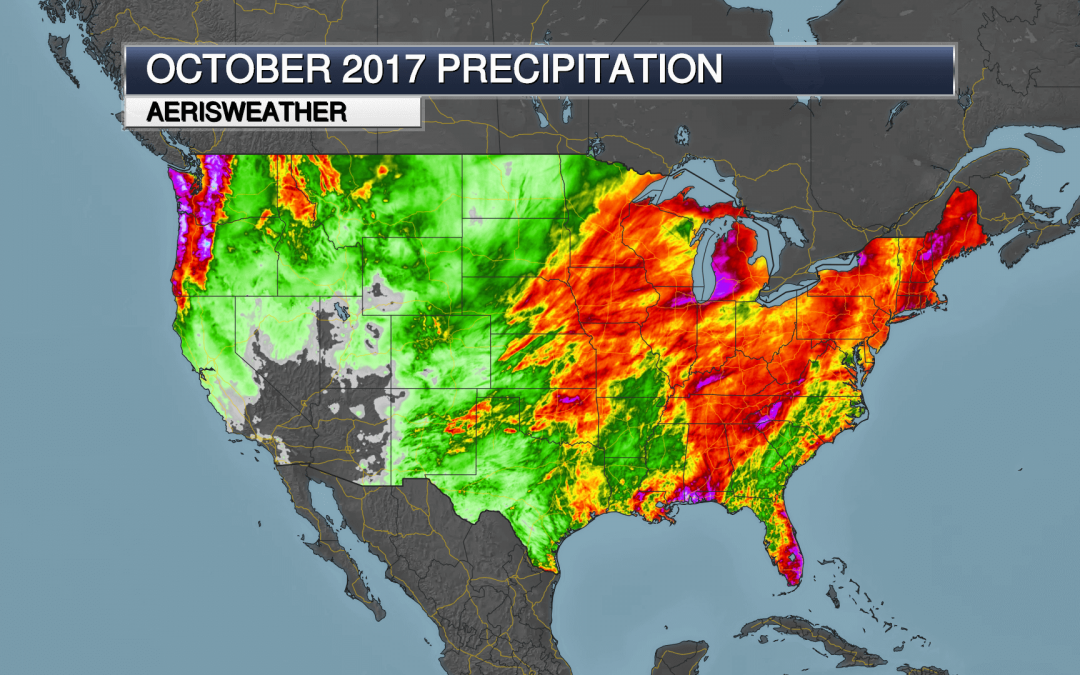 Over a dozen locations – mainly in the eastern United States – saw their warmest October on record during October 2017. Meanwhile, many areas of the eastern U.S. also saw soaking weather, while the Southwest was dry. In this edition of D.J.’s PraeDigits, we take a look back at October 2017 across the nation.

The pattern across the nation in October helped keep heat trapped over the eastern United States, leading to many locations seeing a top ten warmest October on record.

We also saw record heat in parts of the Southwest, where temperatures in Los Angeles soared into the 100s on both the 23rd (102) and 24th (104). This was the second latest on record they have ever had a high in the 100s. On the 24th, both San Louis Obispo and San Diego’s Miramar Naval Air Station hit a high of 108 – tying the warmest a station in the U.S. has ever been so late into the year.

Some of the heaviest precipitation in October 2017 fell across the eastern half of the United States. Hurricane Nate made landfall along the central Gulf Coast October 8th, bringing heavy rain along its path from the Gulf Coast to the Ohio Valley and the Northeast. Parts of the region ended up receiving over a half a foot of rain during the month, while Mobile, AL, received over a foot of rain.

The Northwest also saw a period of heavy rain between the 17th and 22nd, in which Seattle saw over an inch of rain on three separate days. Portland, OR saw their fourth wettest October day on record on the 21st when 2.13″ fell.

Overall, 42 long-term climate locations across the nation saw a top ten wettest October 2017. Here’s a partial list of some of those locations:

Record Dry Weather In Parts Of The Southwest U.S.

According to the Southeast Regional Climate Center, a total of 14 long-term climate locations across the lower 48 saw a top ten driest October on record. This partial list of locations below does not including the California locations shown on the map:

What Could The Month Of November Hold?

Areas from the western United States to the Great Lakes and Ohio Valley have a higher probability of seeing wetter than average conditions during November. Meanwhile, drier than average weather is expected across portions of the south, from eastern Arizona to the Mid-Atlantic and Southeast.