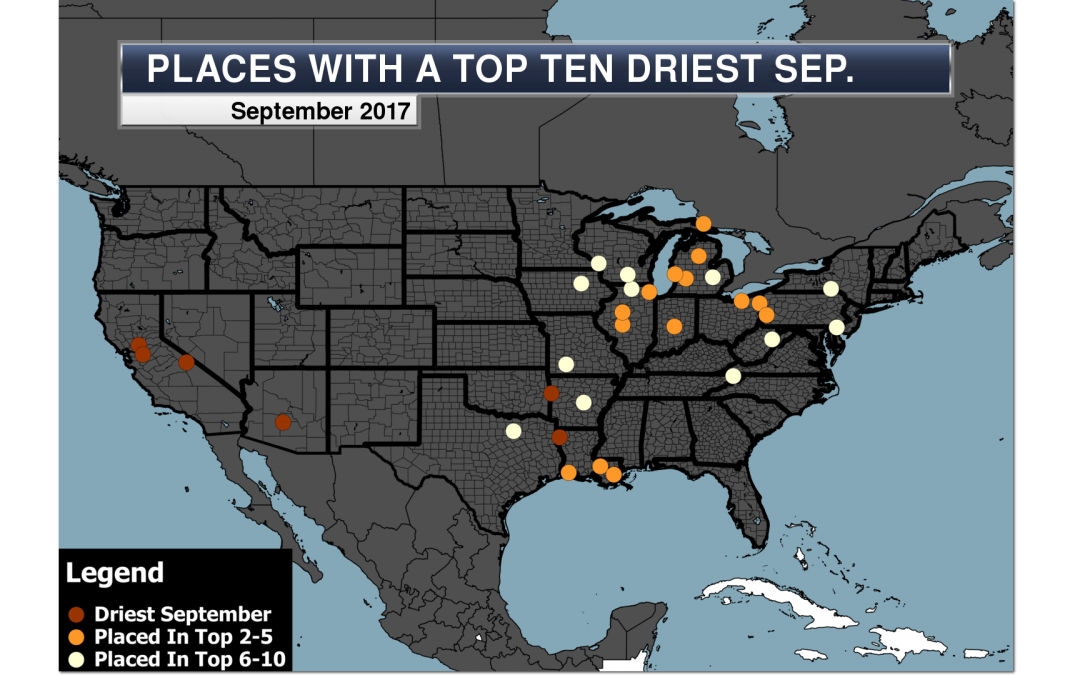 Some of the heaviest precipitation in September 2017 fell across parts of Florida, which was battered by Hurricane Irma during the second weekend of the month (and early into the next week). A COOP station in Ft. Pierce, FL, ended up with 25.71″ during the month, most of that falling within a three day stretch surrounding Irma. Because of this, Ft. Pierce saw their wettest (13.85″ on September 10th) and second wettest (7.80″ on September 11th) September days on record.

The Ohio Valley also ended up with some heavy rain amounts due to two different systems – what was left over of both Harvey (at the beginning of the month) and Irma. Heavy rain was also observed across portions of the Plains, including areas of Montana and the Dakotas under extreme/exceptional drought.

Dry From The Lower Mississippi To The Great Lakes

While the dry season continues across the western U.S., areas from the lower Mississippi Valley to the Great Lakes saw much drier than average weather. This included areas of Louisiana, where areas like Baton Rouge went from their wettest August on record to their second driest September. Both Fort Smith, AR, and Shreveport, LA, recorded no rain at all last month.

According to the Southeast Regional Climate Center, a total of 32 long-term climate locations across the lower 48 saw a top ten driest August on record. This partial list of locations below does not including the California locations shown on the map:

Many Pockets Of Heat In September

Overall, 40 long-term climate locations across the lower 48 saw a top ten warmest September on record. Here is a partial list of those that did:

What Could The Month Of October Hold?

Areas from the Northern Rockies to the Upper Midwest and south into the Central Plains have a higher probability of seeing wetter than average conditions during October, along with parts of southwestern Alaska. Meanwhile, drier than average weather is expected from northeastern Texas to southern New England, including the Ohio and Tennessee Valleys.