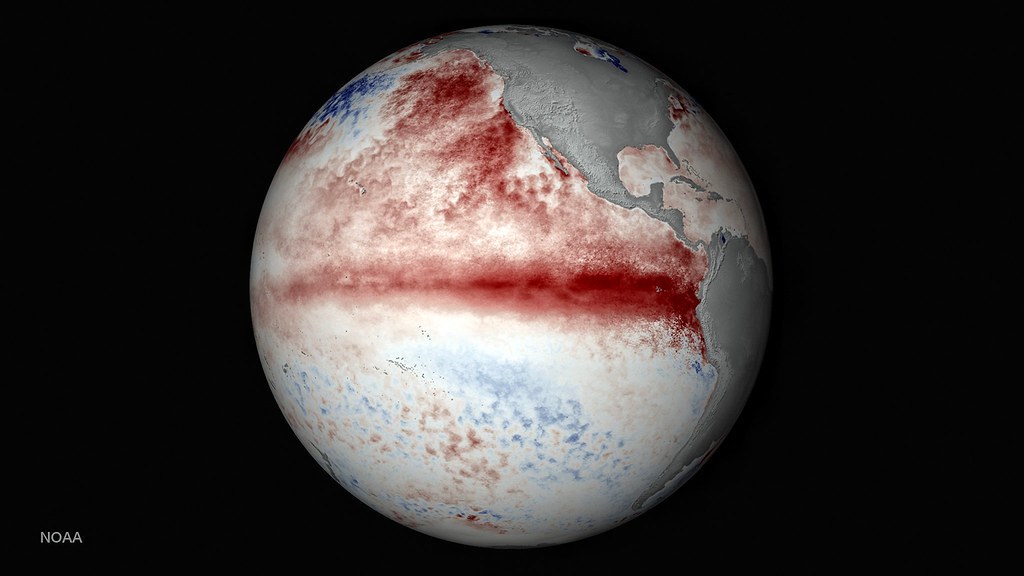 The El Niño conditions in the Pacific have been increasing for the past couple months and some scientists believe that this could be one of the strongest El Niño instances on record. So what exactly is El Niño and how does it affect the United States? Let’s dive in.

NOAA defines El Niño as “a phenomenon in the equatorial Pacific Ocean characterized by a positive sea surface temperature departure from normal (for the 1971-2000 base period) in the Niño 3.4 region greater than or equal in magnitude to 0.5 degrees C (0.9 degrees Fahrenheit), averaged over three consecutive months.” So basically, El Niño is a climatological phenomenon in which warmer than average Pacific ocean waters occur for a prolonged period of time. La Niña is the exact opposite scenario in which Pacific water temperatures are cooler than average. In the image below, the sea surface temperatures of El Niño and La Niña are compared. El Niño has more ‘warm’ (red and orange) tones, which represent ‘warmer’ waters, across the central Pacific where as La Niña has more ‘cool’ (purple and blue) tones, which represent ‘cooler’ waters. These two situations aren’t just interesting occurrences, they can also have some significant impacts to weather patterns across North America.

Generally speaking, the warmer ocean temperatures of El Niño tend to impact the weather in different ways across the separate regions of the country. The southern part of the U.S. is typically cooler and wetter than average, while the Pacific Northwest stays drier. Warmer weather, especially in the winter months, can be seen in western Canada, southern Alaska, and the extreme northern tier of the country. These changes in seasonal averages can be both good and bad. For instance, a warmer than average winter can help alleviate heating costs across the northern U.S., but businesses and local economies that depend on lots of snow for snow sports or thick ice for fishing and skating may feel the ill effects of the warm temperatures. Lots of precipitation in the South can lead to flooding and crop loss. However, long felt drought conditions can be erased in a matter of days.

An area that may be especially excited to hear of the possible record setting El Niño is California. Typically, southern California tends to see a wetter than average period thanks to the warmer sea temperatures. This is due to a split in the jet stream during the winter months. The southern stream of the jet, or river of air aloft, flows over the southern half of California, bringing higher than average chances for precipitation. Over ninety-nine percent of the state is in some type of drought. Forty-six percent of California still remains in an exceptional drought, so the situation is still dire. Historically, a few El Niño years have brought above average seasonal precipitation, but although there is a higher chance of more winter rain, nothing is certain.

Based on the latest guidance from computer models, NOAA forecasters believe that the peak strength of El Niño will be sometime between late fall and early winter. These warmer than average sea temperatures have an eighty-five percent chance of lasting into early Spring of next year. The signs point to a strengthening El Niño, but the exact impact on winter temperatures and precipitation is still uncertain.

For more information on this latest El Niño event, check in with NOAA.