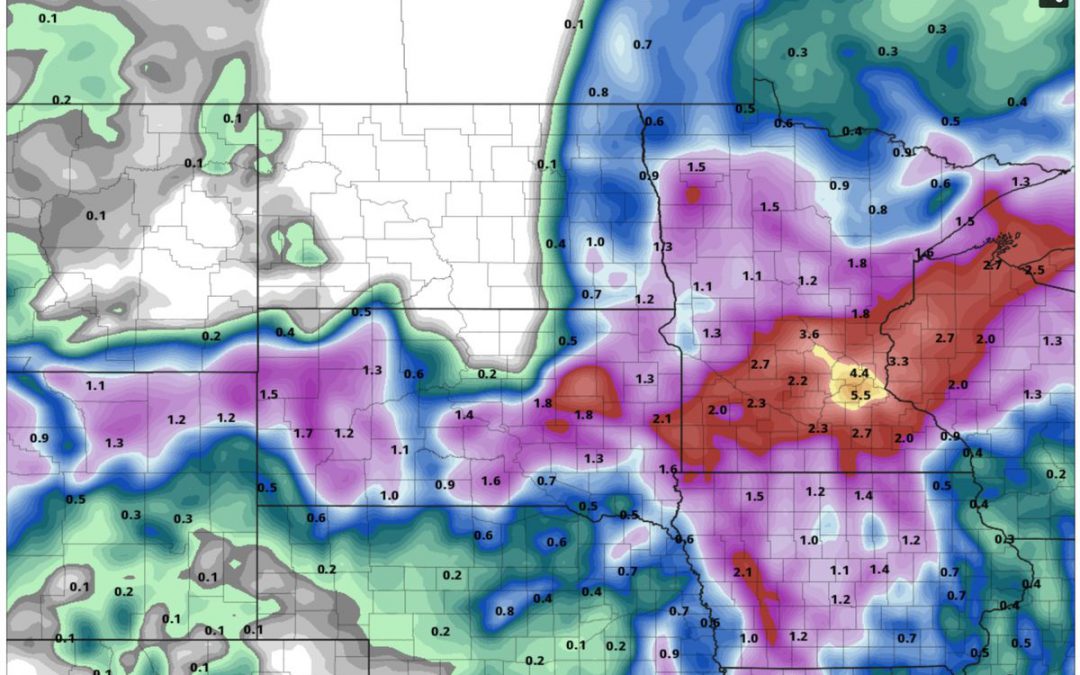 I was at a rare (and welcome) loss for words yesterday. Low to mid 80s on the 5th day of April? We broke the old Twin Cities record of 80F set in 1991. If anyone asks (I certainly hope not) yesterday’s temperatures are typical for late June.

An omen of a stinking hot summer to come? Perhaps. Flowers blooming in late March 2012 preceded a steamy summer. Then again a mild March/April may be atmospheric- payback for a bitter February. We just seem to ricochet from one extreme to the next. How I long for “average weather”.

Welcome to one of the wetter weeks of spring. Models print out 1-2 inches of rain by Friday (a few models suggest rainfall amounts as high as 3” in some areas by the end of the week); another well-timed soaking for lawns, gardens and fields. Showers stall over southern Minnesota today with the heaviest rain falling Wednesday into Thursday morning. A surge of drier air into the storm’s center MAY eek out a brighter sky Thursday afternoon, but all bets are off for the Twins Home Opener. It’ll be touch and go. No slush sightings, just 50s and a few 60s into next week. Whew.

ECMWF Rainfall Solution. 2-3” of rain by Friday morning? NOAA NAM is suggesting over 4” (top image) and there’s little doubt that a slow-moving storm will create a long-duration rainfall event from late tomorrow into Friday. From spotty wildfires to street flooding in the meteorological blink of an eye? At this point nothing surprises me anymore.

Record-Smashing. The Twin Cities saw 85F yesterday, breaking the old record of 80F in 1991. The normal high is 52F, if anyone asks.

A Booming End to a Hot April Day. Parts of Minnesota (including the MSP metro) were in a “slight risk” of severe storms from NOAA SPC yesterday and, sure enough, severe storms bubbled up by late evening, producing 1-2” diameter hail. Welcome to spring.

Slow Cooling Trend. No more 80s in sight; temperatures returning closer to average by the end of the week with rain holding on until Friday. We start to dry out Saturday with Sunday probably the sunnier, nicer day of the weekend.

Reality Check. No slushy surprises (here) although plowable amounts of snow are possible as close as the Black Hills of South Dakota. The extended outlook calls for mostly 50s with a few 60s.

Omega Block 2 Weeks Out? If NOAA GFS verifies (place your bets) weather systems will temporarily stall by the third week of April, favoring wet, stormy weather for the Northeast and western USA, with a ridge of high pressure stalled over the central U.S., where temperatures may continue to trend above average.

The U.S. Is Finally Trying to Unlock the Power of Wave Energy. WIRED.com (paywall) talks about a source of sustainable energy many of us haven’t given much thought to: “At first glance, waves have the makings of an ideal renewable energy source. They’re predictable, constant, and tremendously powerful. Their energy potential is astonishing—researchers estimate that waves off the coasts of the United States could generate as much as 2.64 trillion kilowatt-hours annually, equivalent to 64 percent of the country’s total electricity generation in 2019. But capturing the immense power radiating across our oceans’ surfaces is no easy feat—wave energy technology is challenging to engineer, startup costs are high, and testing in open ocean waters is a regulatory nightmare. That’s why wave energy’s trajectory has been a stop-and-go affair plagued by false starts for decades. But things may finally be starting to shift for the industry: The federal government recently approved the first full-scale, utility-grid-connected wave energy test site in the US…”

The Real Roots of Midlife Crisis. The dreaded U-shaped curve, it turns out. You’re not alone, according to new research summarized in a post at getpocket.com: “…In recent work, however, U-curve researchers have begun to find evidence that is harder to dismiss as mere statistical correlation. Oswald, Terence Cheng, and Nattavudh Powdthavee have found the U-curve in four longitudinal data sets from three countries: an important kind of evidence, because it traces the lived experiences of individuals over time, rather than comparing people of various ages in a statistical snapshot. Likewise, Blanchflower and Oswald, looking at samples from 27 European countries, have found a “strong hill-shaped pattern” in the use of antidepressants, peaking in people’s late 40s. Being middle-aged “nearly doubles” a person’s likelihood of using antidepressants. The same pattern appears, they’ve found, in the two U.S. states that collect the relevant data (New Hampshire and New Mexico)...”

Biden’s Infrastructure Plans are Popular, But Support is Partisan. Reuters has the results of new polling: “President Joe Biden’s $2 trillion infrastructure plan is loaded with road repairs, internet upgrades and other initiatives that are widely popular on their own, according to a Reuters/Ipsos poll, but U.S. public support declines when the initiatives are packed into a Democratic bill and sold as a Biden-backed plan. The March 31-April 1 national opinion poll highlights the challenges facing Biden and fellow Democrats in Congress as they roll out the American Jobs Plan in front of Republican opposition and a hyper-partisan American public. While most Americans, including many Republicans, like the ideas in the plan in general, they are less likely to support legislation written by Democrats to make those ideas a reality, the poll shows...”

Biden’s Green Energy Plans Clash With Pledge to Create Union Jobs. POLITICO reports; here’s an excerpt: “…The president’s push to decarbonize the economy will mean eliminating the kind of steady, fixed-location jobs that come with coal mines or fossil fuel power plants. The Biden plan would require the construction of vast numbers of solar, wind and battery projects, along with potentially new pipelines for carbon dioxide and hydrogen. But construction jobs are temporary and require mobility, and once those projects are complete, they’ll need few workers to maintain them and keep them operating. “The jobs that he talked about yesterday were construction jobs,” said Phil Smith, a spokesman for the United Mine Workers of America, a day after the Biden speech. “We’re not seeing anything concrete that our members can look at and say, ‘OK, that’s where I’m gonna fit in…’”

Big Meat and Dairy Companies Have Spent Millions Lobbying Against Climate Action, New Study Finds. Inside Climate News has details: “Top U.S. meat and dairy companies, along with livestock and agricultural lobbying groups, have spent millions campaigning against climate action and sowing doubt about the links between animal agriculture and climate change, according to new research from New York University. The study, published this week in the journal Climatic Change, also said the world’s biggest meat and dairy companies aren’t doing enough to curb their greenhouse gas emissions, with only a handful making pledges to reach net-zero emissions by 2050...”