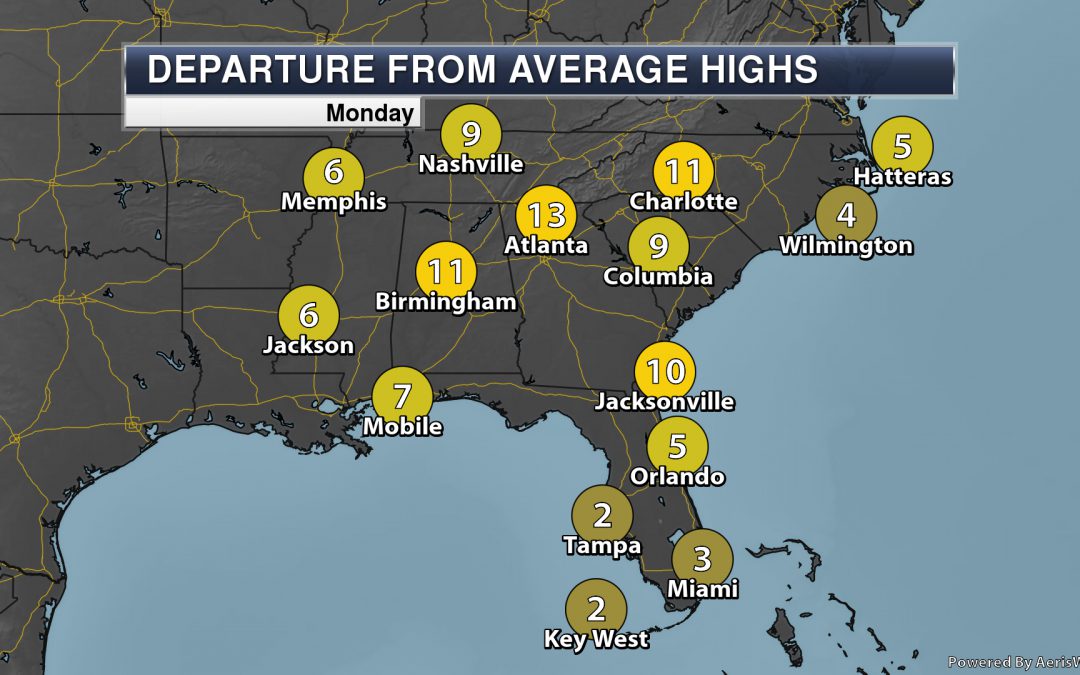 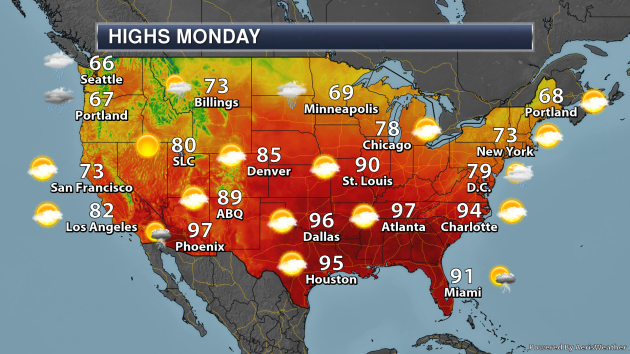 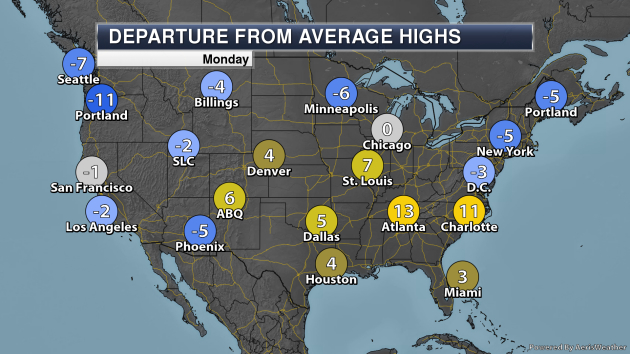 As an area of low pressure works across the Northern Plains, showers and thunderstorms are likely to spread east as we go throughout Monday. Another area of low pressure will bring some of the eastern Mid-Atlantic a few showers and storms, some of which will fall in areas that were hard hit by rain from Dorian last week. A trough of low pressure will help spark some storms across western Texas and the Panhandle of Oklahoma. Some storms will also be possible across the Desert Southwest, meanwhile, rain is likely in the Pacific Northwest. 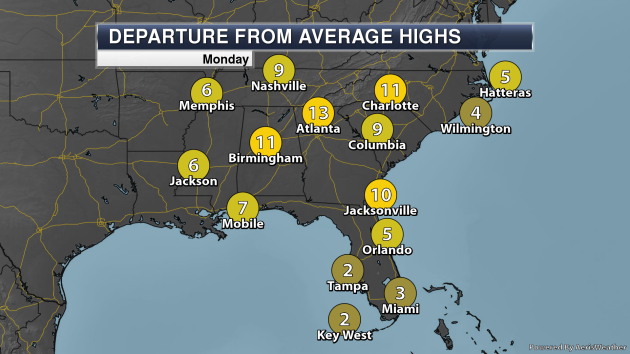 Monday will be a warm day in the Southeast, with some areas like Atlanta and Charlotte 10-15F degrees above average. 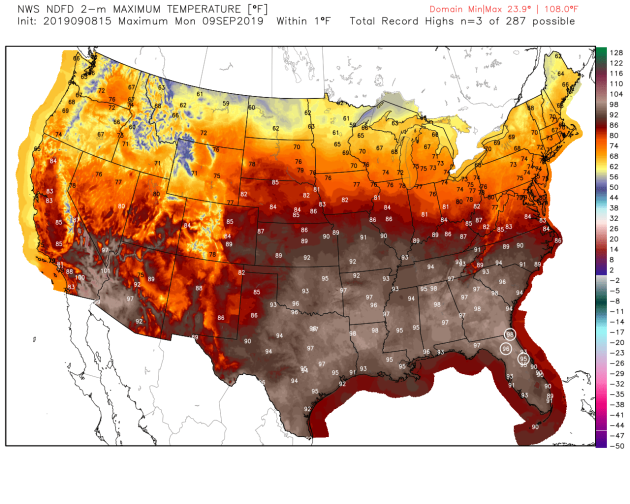 And a few of those highs across the Southeast could be in record territory Monday, including for Gainesville and Jacksonville. 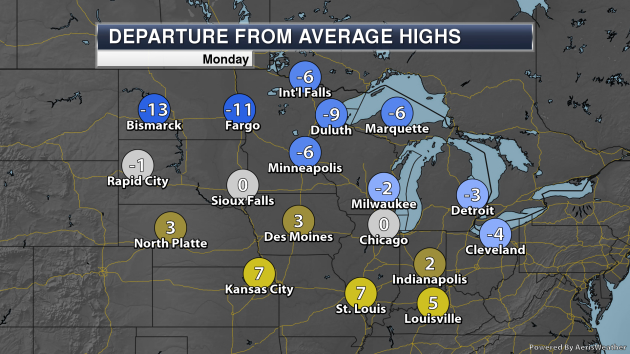 Meanwhile, highs will be 10-15F below average across portions of the Northern Plains on Monday. While we aren’t expected to see record cold highs, it will certainly feel a little bit like fall across the region. 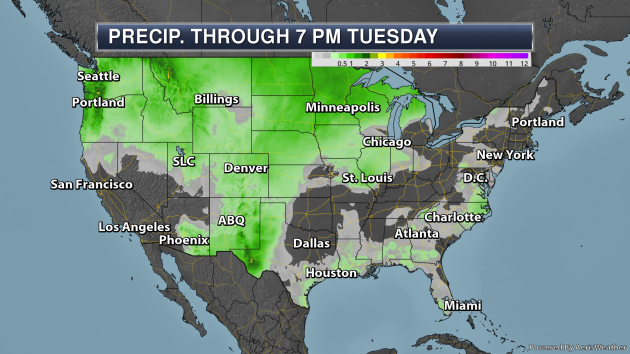 Some of the heaviest rain through Tuesday evening will occur in the Southern U.S. as well as the Northwest, where over 3” could be possible in spots. 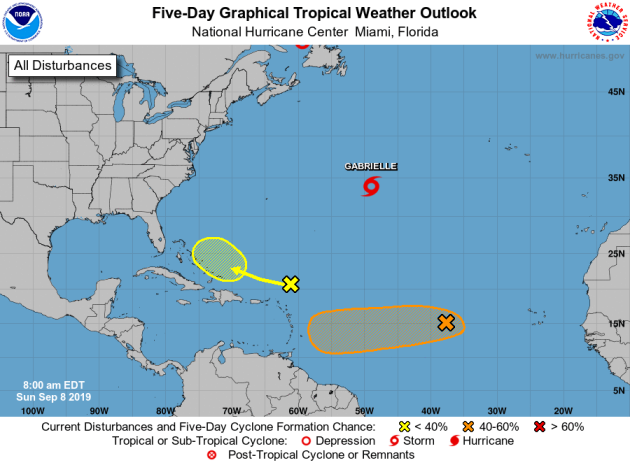 Taking a look at the Atlantic basin, Dorian is still alive as a Post-Tropical Cyclone, but it’s so far north on this map (over Atlantic Canada) you can’t even see it! Tropical Storm Gabrielle is also over the central Atlantic. There are also two areas of concern. The first is located west of the Cabo Verde Islands and has a 40% chance of forming into a tropical system in the next five days. Meanwhile, a disorganized area of storms located north/northeast of the Leeward Islands could have a chance of becoming a tropical system mid-week. Chance of formation for that system over the next five days is at 20%.

More from CNN: “On September 14, an asteroid will pass by Earth that’s larger than some of the tallest buildings on the planet. Asteroid 2000 QW7 is estimated to be between 290 meters and 650 meters in diameter, or between 951 and 2,132 feet, according to NASA. The world’s tallest building is the Burj Khalifa in Dubai, which reaches 2,717 feet tall. The second tallest building is the Shanghai Tower at 2,073 feet. The asteroid will be traveling at 14,361 miles per hour when it passes within 3,312,944 miles of Earth at 7:54 p.m. ET. Astronomers don’t believe the asteroid poses any danger, but NASA’s Center for Near Earth Object Studies is tracking it.”

More from Newsweek: “Heatwaves that plagued France this summer left some 1,500 people dead, according to the European nation’s health minister. Agnes Buzyn explained on France Inter radio on Sunday that there had been at about 1,000 more deaths than normal during the summer months, with half of the deceased being 75 or older, the French newspaper Le Monde reported. In total, she said there were 18 exceptionally hot days recorded in France during June and July. Although the number of deaths was high, Buzyn also pointed out that it was much lower than the 15,000 deaths that occurred during scorching summer heatwave back in 2003. The minister attributed the lower death toll in 2019 to a successful public awareness campaign.”

More from The Guardian: “The ocean off the western coast of North America is five degrees Fahrenheit hotter than usual after warming at an unusually rapid rate, according to the US National Oceanic and Atmospheric Administration (Noaa). It has been dubbed the “north-east Pacific marine heatwave of 2019”. Marine heatwaves are defined as oceanic events in which the surface temperature of the water is warmer than 90% of past measurements for at least five days in a row. The current heatwave is the second-largest since scientists started tracking the phenomenon in 1981, Noaa reported on Friday. If the abnormal patch does not dissipate soon, it could become as destructive as the so-called “blob” of warm water in the same area that, in 2014-2016, created toxic algae blooms, killed sea lions and endangered whales by forcing them to forage closer to shore.”