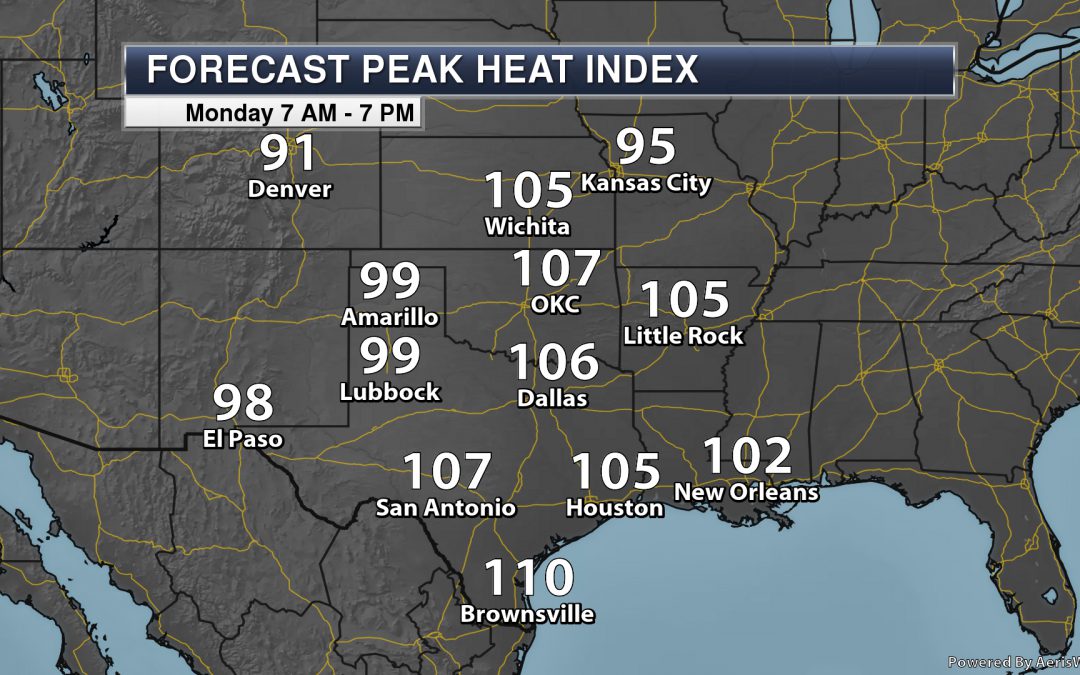 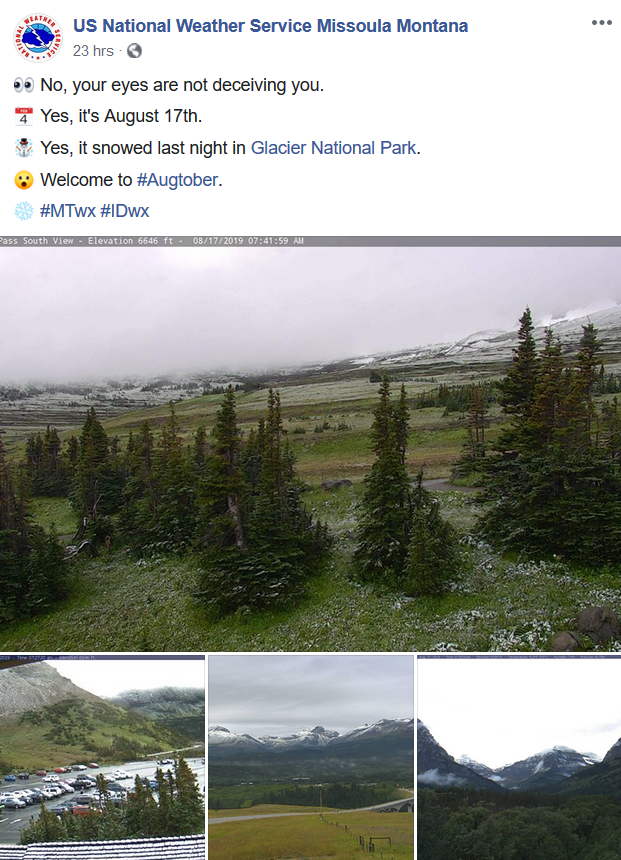 I’m just going to leave this here as a reminder that winter isn’t that far away. It snowed in Glacier National Park Friday Night. Of course, there wasn’t too much of the white stuff, but enough for some slight accumulation in some areas. Enjoy every last bit of summer and autumn that there is… 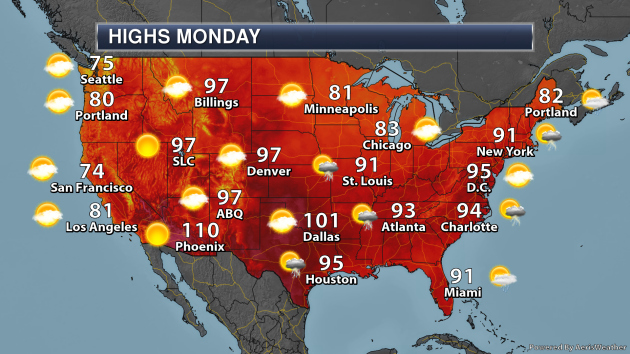 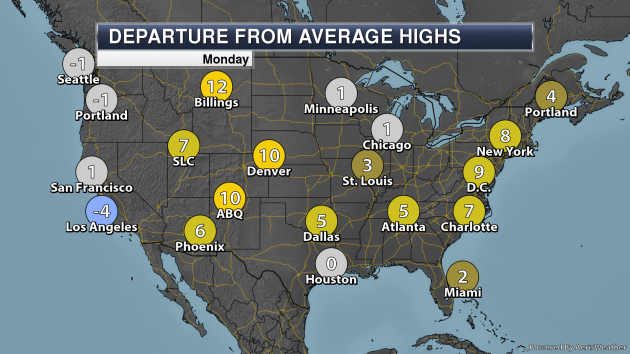 On Monday, a cold front moving toward the Northeast and Ohio Valley will help spark off some showers and storms. Heavy rain will continue to be possible along the Gulf Coast as Gulf moisture streams into the Southeast. A few showers and storms will be possible across portions of the Northern Plains by the evening hours with a new frontal system moving south. Highs are expected to be above average from the Rockies toward the East Coast, with some record highs possible. 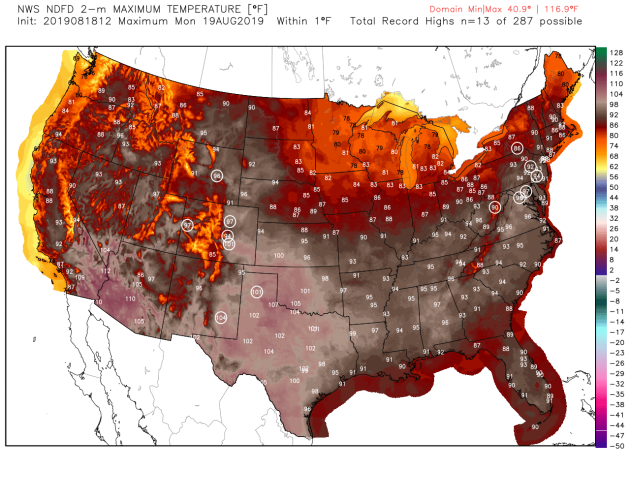 Several record highs could be broken Monday from the Front Range into the Texas Panhandle, and into portions of the Northeast as well. This includes locations like Denver, Amarillo, Washington D.C., and Philadelphia. 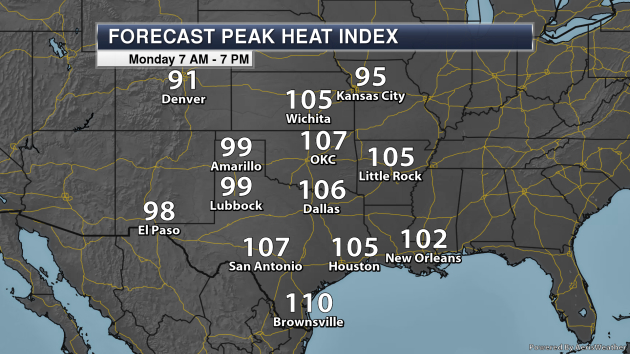 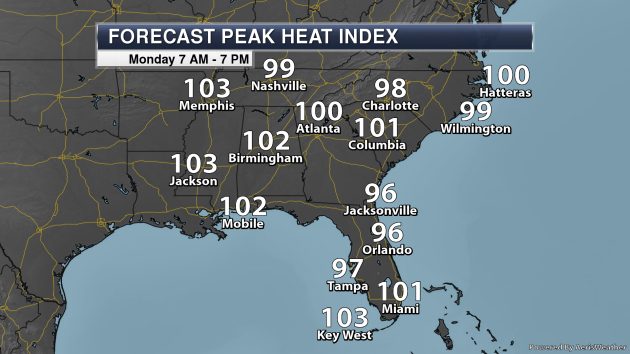 Across the southern United States Monday, when you factor in the humidity it will certainly be a hot day with afternoon heat index values climbing into the 100s. 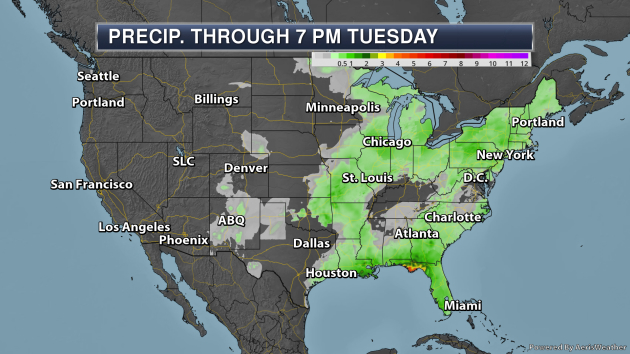 Turning to rainfall, the heaviest through Tuesday evening will be across portions of the Gulf Coast, where areas from southeast Louisana to the Florida Panhandle could see at least 2-4″ of rain. Most of the western United States will see dry weather.

Rising Great Lakes water levels benefit some, but cost others

More from Marketplace: “Lake Superior’s gales are legendary. But the high water levels, LeBeau said, have made these recent storms even more destructive. The city has estimated damage from the three storms, in less than two years’ time, at nearly $30 million. It’s a similar story elsewhere around the Great Lakes, where beaches have disappeared, docks are submerged, and lakeshore is eroding. But for the shipping industry the higher water levels have been a boon. That’s because deeper water allows ships to carry more cargo. “A great example of this is a vessel like the Edwin H. Gott, which can carry an additional 267 tons of iron ore per extra inch of draft,” said Jayson Hron, spokesperson for the Duluth Seaway Port Authority. “That’s something like $26,000 worth of extra ore per inch, so if you multiply that by 2 or 3 inches of water level, and then multiply it by more than 30 trips over the course of a shipping season, it adds up to some significant benefits,” he said.”

Scientists bid farewell to the first Icelandic glacier lost to climate change. If more melt, it can be disastrous

More from CNN: “Scientists say they are bidding farewell to Okjökull, the first Icelandic glacier lost to climate change, in a funeral of sorts. Researchers will gather Sunday in Borgarfjörður, Iceland, to memorialize Okjökull, known as Ok for short, after it lost its status as a glacier in 2014. The inscription, titled “A letter to the future,” on the monument paints a bleak picture. “Ok is the first Icelandic glacier to lose its status as a glacier. In the next 200 years, all our glaciers are expected to follow the same path. This monument is to acknowledge that we know what is happening and know what needs to be done. Only you know if we did it,” the plaque reads in English and Icelandic.”

More from MTPR: “More than 11,000 waterfowl and wetland birds were killed by hail Sunday at the Big Lake Wildlife Management Area west of Billings. Montana Fish, Wildlife and Parks biologists who visited the lake this week picked up dead ducks and shorebirds with broken wings, smashed skulls, internal damage and other injuries consistent with massive blunt-force trauma. They estimated that 11,000 to 13,000 birds were killed. A neighboring landowner reported baseball-sized hail that broke windows in the area. Local weather reports said Molt and Rapelje suffered two-inch hail propelled by a 70-mile-per-hour wind.”