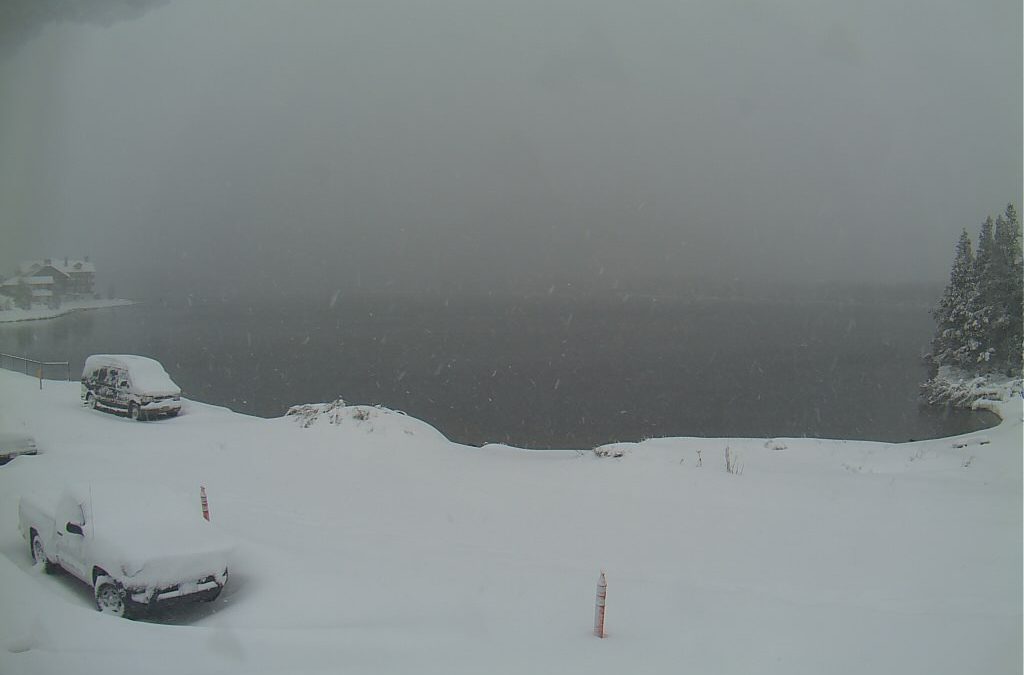 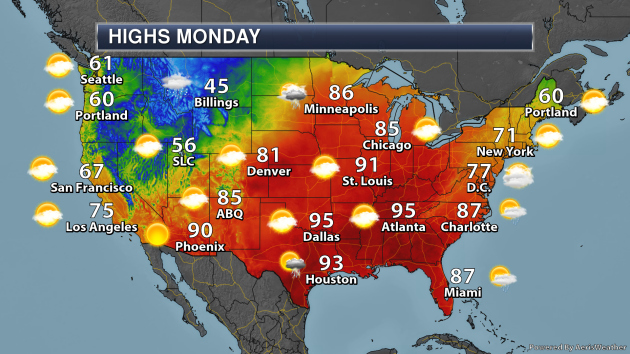 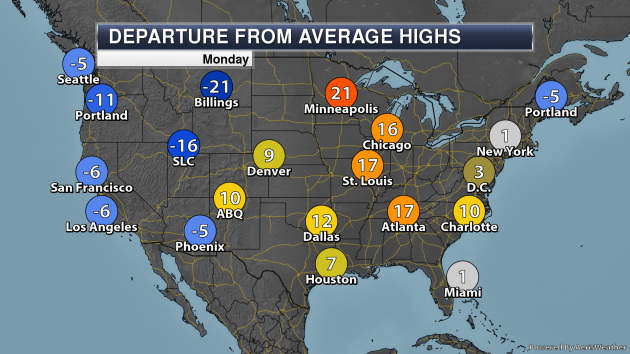 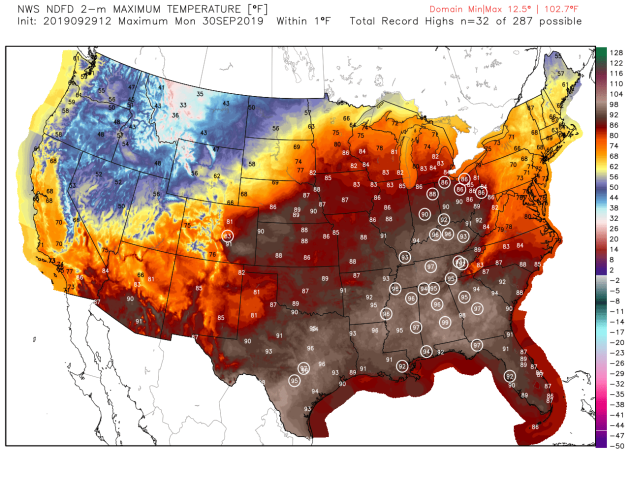 Numerous record highs are expected on Monday from the Ohio Valley stretching to the northern and eastern Gulf Coasts, and across central Texas as well. Some locations would include Cleveland, Indianapolis, Nashville, Atlanta, Tampa, New Orleans, and Austin. 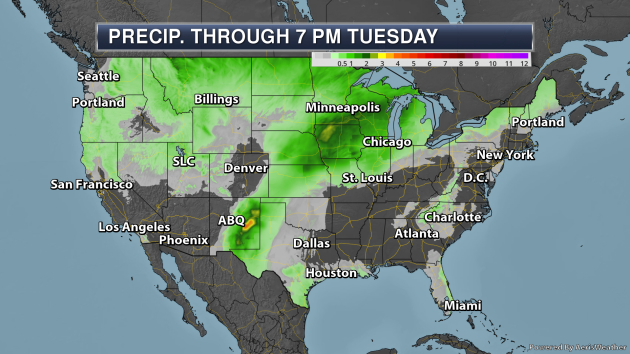 Some of the heaviest precipitation through 7 PM Tuesday will be from eastern New Mexico to the Great Lakes, where rainfall tallies of at least 1-3″ will be possible. 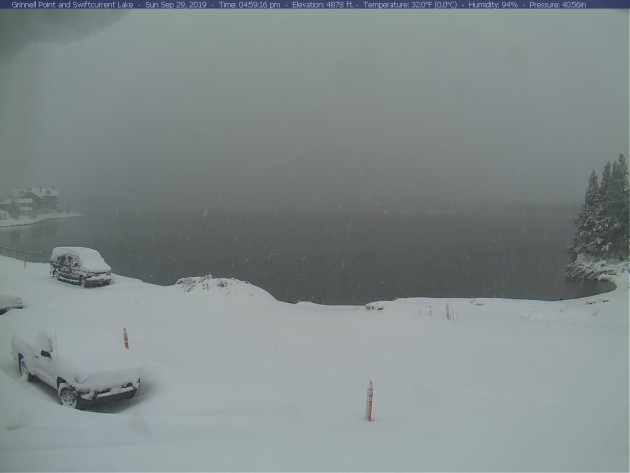 Winter arrived out west over the weekend, with feet of snow accumulating in portions of the Northern Rockies. The top snow total through early Sunday evening was 40″ in Browning, MT. Travel conditions were rough if not impossible, with multiple slideoffs and roads closed in the region. The above view was from Glacier National Park. 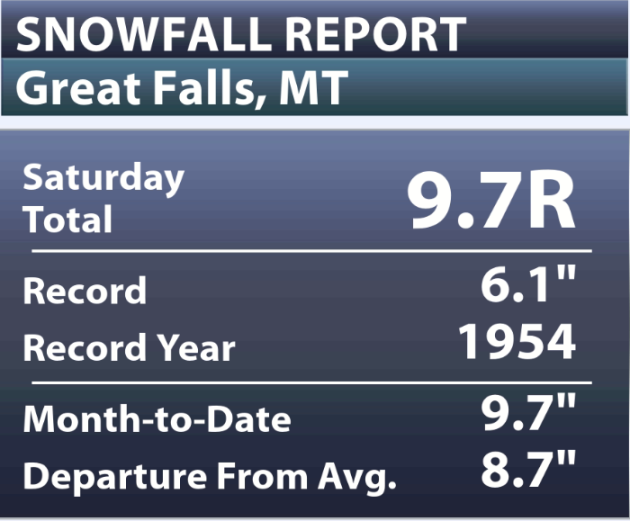 In Great Falls, MT, 9.7″ of snow fell Saturday, setting a new daily record. That is the most snow that Great Falls has received in a single September day on record, and already made this September the third snowiest September on record (most: 13.2″ in 1934). Of course, more snow was falling Sunday, so we’ll have to see if they’ve broken that record as we head into Monday. 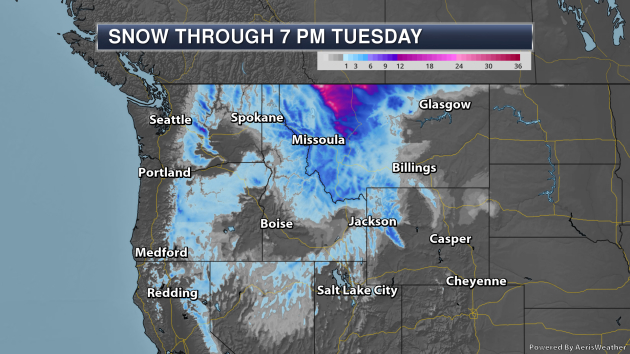 More snow will continue to fall mainly through Monday morning in the Northwest, with Sunday-Tuesday snow totals of 2-3 feet in the mountains and foothills of the Rocky Mountain Front. 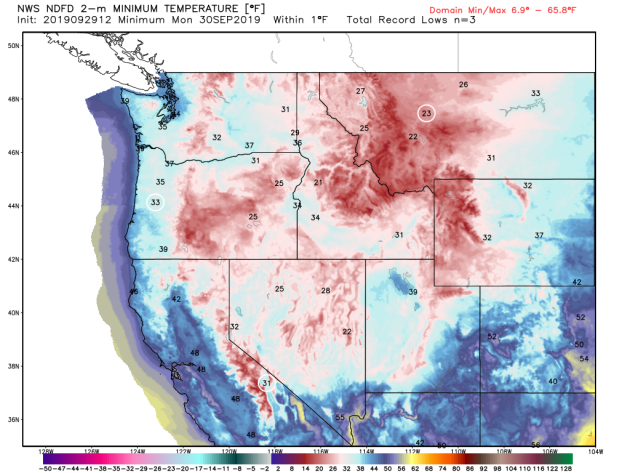 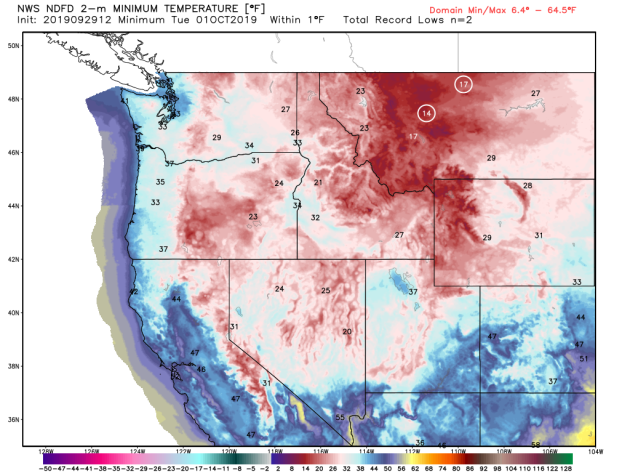 And behind the snow will come record lows across portions of Montana Monday (first graphic above) and Tuesday morning (second graphic). Some areas will see lows in the teens including Great Falls, where the Tuesday morning low of 14F would crush the previous record low for the day of 22F in 1959. 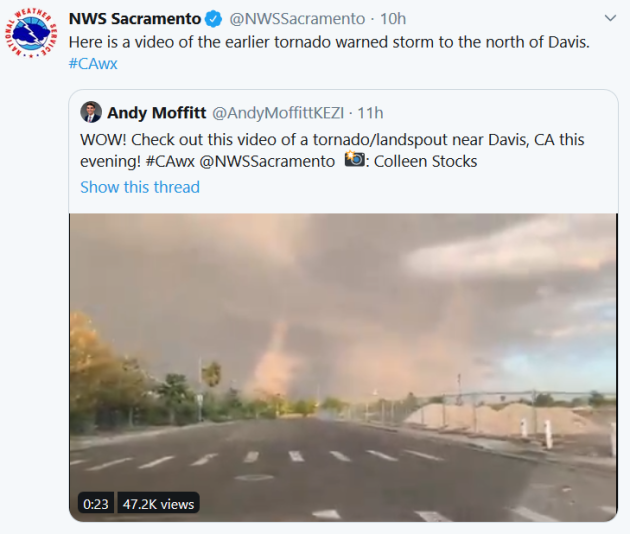 Here’s something you don’t see every day – a tornado touched down near Sacramento Saturday evening. There had only been 14 other tornado reports so far this year according to the Storm Prediction Center in the state. You can view a video of the tornado by clicking here. 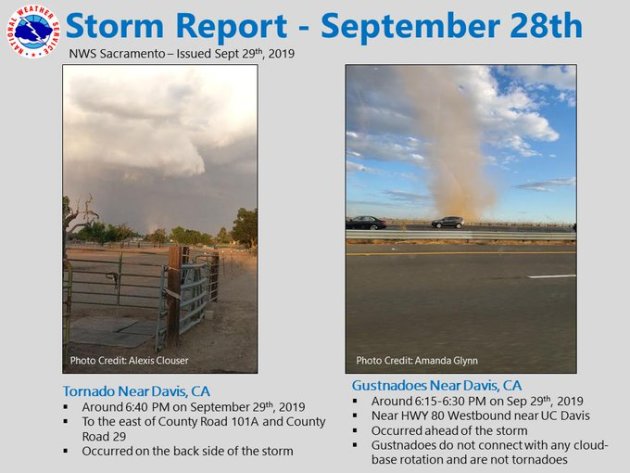 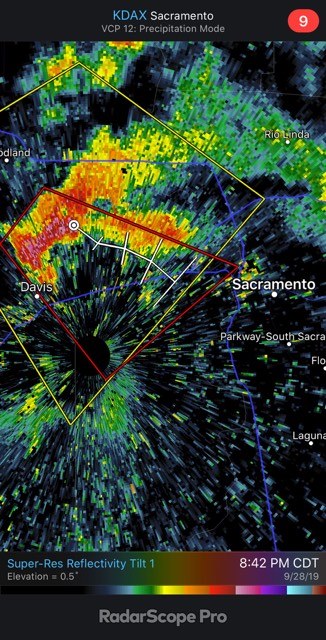 Here’s a look at the storm that caused that tornado west of Sacramento and north of Davis around the time it touched down.

More from Forbes: “Hurricane Lorenzo rapidly strengthened into a scale-topping category five hurricane on Saturday evening, with maximum sustained winds reaching an incredible 160 MPH. This breaks the record for both the easternmost and northernmost category five hurricane ever recorded in the Atlantic Ocean; before this sudden strengthening, Lorenzo was already the strongest storm ever recorded so far east in the Atlantic. The hurricane, which poses no threat to the United States, will approach the Azores Islands and possibly the British Isles next week as a much weaker storm. This is the second spike in Lorenzo’s strength in the past couple of days. The hurricane’s first peak on Thursday night saw maximum sustained winds climb up to 145 MPH. It’s incredibly rare to see such a strong storm so far east in the Atlantic Ocean; the last storm to grow so strong achieved its peak intensity hundreds of miles to Lorenzo’s west.”

‘It’s heartbreaking’: a coastal community watches its beach wash away

More from the Guardian: “Noel Burns started work on Stockton beach as a council lifeguard in 1971 and spent 37 years with his eyes fixed on the surf and the sand.“ Mate, I’m broken-hearted,” says the 70-year-old. “It’s terrible what it looks like now. They have been studying this [erosion] for 20 years but nothing is getting done. Everyone is getting angry now.” Stockton beach in New South Wales is being washed away by dramatic coastal erosion which has already claimed a childcare centre, and the community is now demanding emergency action from the state government. The childcare centre, supporting 72 children, was forced to permanently close on 3 September and the Stockton Surf Life Saving Club – once a 150-metre run for Noel Burns across the sand from the waves – now has water regularly crashing at its rock wall.”

More from Bloomberg: “President Vladimir Putin needs to go green quickly to stop the permafrost from melting, so that Russian oil and gas companies can keep pumping the hydrocarbons that are warming the planet and making the permafrost melt. Even I’m struggling with the warped logic of that one, but it’s the conclusion I’ve reached from Russia’s sudden ratification of the Paris climate accord and from reading the latest report of the Intergovernmental Panel on Climate Change.”