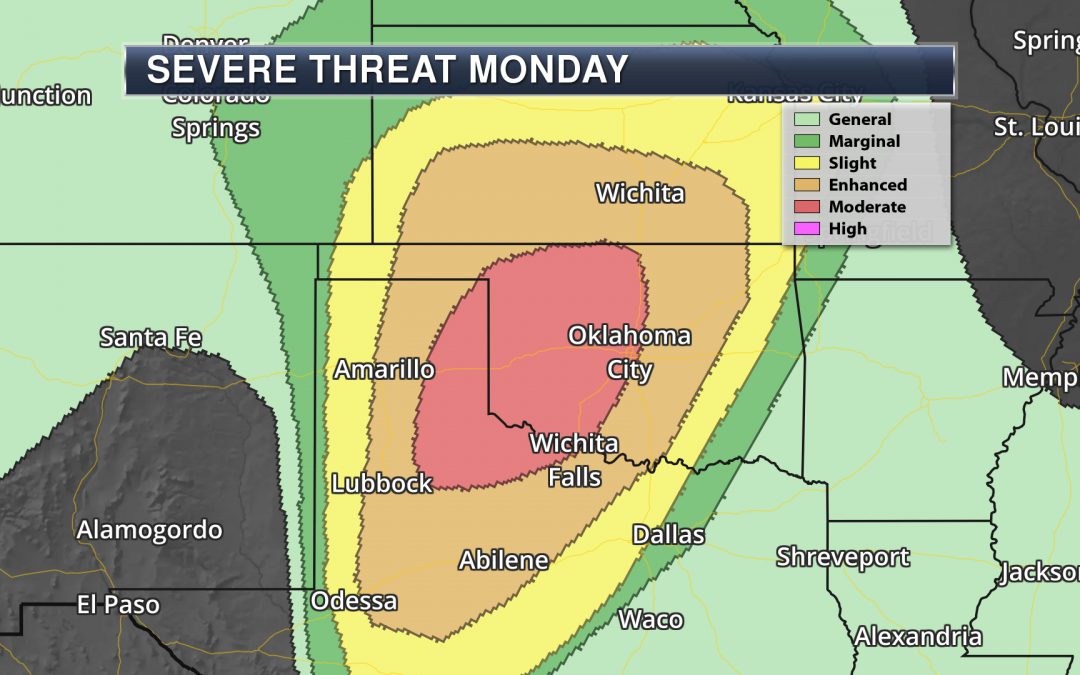 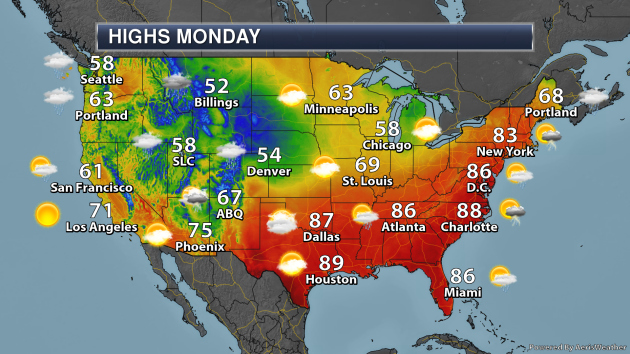 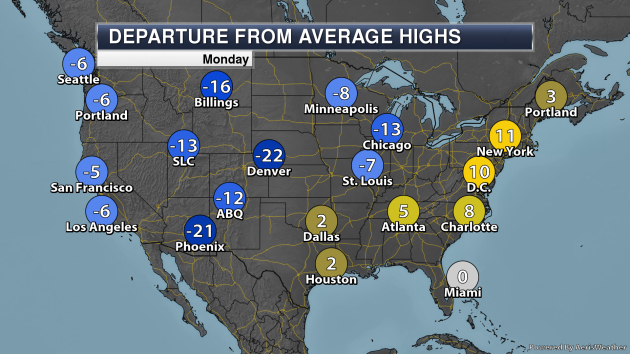 A new system pushing out into the central United States will help to produce rain and mountain snow from the Northern Rockies out into the Plains. Some of the storms across the central and southern Plains will be severe – more on that in a moment. A cold front pushing through the eastern United States will produce showers and storms from New England into the Mid-Atlantic. Meanwhile, a new system approaching the Pacific Northwest will bring the region rain and higher elevation snow. 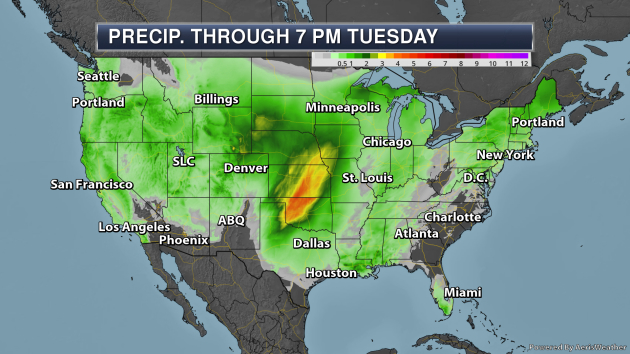 The heaviest rain through Tuesday evening will be across the central United States, where an area of 2-5″ of rain could fall. This will cause the potential of flooding across parts of the region.

Monday Weather Set Up. As a new system starts to push out into the central United States to begin the work week, a warm front will be lifting northward across parts of Texas and Oklahoma with storms expected to form across the warm sector during the afternoon and evening hours. These storms would be capable of all modes of severe weather, including large hail, damaging winds, and tornadoes – some of which could be strong. Another round of storms is expected Monday Night across the region, particularly capable of damaging winds.

Moderate Severe Weather Risk Monday. Due to the potential significant severe weather risk across parts of Texas and Oklahoma, a Moderate Risk of severe weather is already in place for Monday. This Moderate Risk includes locations like Oklahoma City and Lawton (OK) as well as Childress (TX). Once again, all modes of severe weather are possible with the first round of storms, and the atmosphere is set up for the potential of strong, significant tornadoes. The second round of storms – expected Monday Night – will contain mainly a damaging wind threat.

Heavy Rain Threat. The other threat to watch Monday into Tuesday will be another round of heavy rain across parts of the central United States, including areas that could see severe weather Monday. Right now the potential exists for another 2-5” of rain from the Texas panhandle northward toward the Omaha area. This will be on top of heavy rain that has already fallen across this region not only this month (through Saturday, Oklahoma City has already received 6.46” of rain this month, with 8.00” falling in Manhattan, KS) but over the past several days, and could lead to flooding issues.

Tropical Trouble In The Atlantic Early This Week? 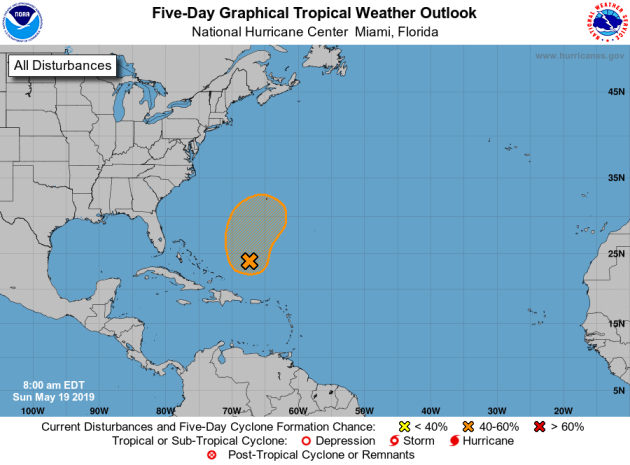 The calendar may say May, that doesn’t mean tropical season can’t start early in the Atlantic. The National Hurricane Center is watching an areas southwest of Bermuda where an area of low pressure should form Monday. That area would have a chance of becoming a tropical/subtropical system by Tuesday before conditions become unfavorable for development. As of Sunday afternoon there was a 40% chance of formation in the next 48 hours.

Moderate drought threatens to dry up profits for Lowcountry farmers

More from ABC 4 News: “A drought map of South Carolina shows that 15 South Carolina counties are dealing with a moderate drought. Several years of extreme weather, floods, frosts, and now, drought is drying up profits for our farmers. Leslie Tumbleston runs her family’s blueberry farm, Champney’s. Tumbleston doesn’t like what she sees, “I’m not seeing a lot here to start picking.” Picking that should start in about a week. But no rain means no blueberries. “We don’t have a huge quantity of water, there’s no way we can do what God puts down in one inch of rain,” said Tumbleston.”

The volcano that built Bermuda is unlike any other on Earth

More from National Geographic: “No two volcanoes are the same, but they all form in the same handful of ways. All, it seems, except for the ancient volcano forming the foundations of the island of Bermuda. After examining rocks from deep under the island, scientists discovered that this quiet volcano formed in a way that is, so far, completely unique. The work, reported this week in the journal Nature, not only solves a long-standing mystery about this beautiful isle in the Atlantic, it also describes a whole new way to make a volcano. To crack the case, the team examined a 2,600-foot-long pillar of rock that is the only core sample taken from Bermuda. Drilled from near an airport back in 1972, the core had been kept in storage at Dalhousie University in Nova Scotia and was gathering dust. While the team suspected something unusual must be going on, a comprehensive geochemical assessment of the rock took them completely by surprise.”

More from InsideClimate News: “When the storms keep coming, when the land below your feet erodes and the industry that has sustained you starts to disappear, how do you stay in the place you call home? How do you leave—where do you even go? Since Hurricane Katrina battered Louisiana in 2005, followed by a series of disasters linked to climate change and the Deepwater Horizon oil spill, these questions have plagued coastal parts of the state. In a sweeping plan released Wednesday, the state issued a blueprint for coping with the impacts of a warming planet, including a human migration that has already begun. “Louisiana is in the midst of an existential crisis,” the report says. “Its response to this crisis can either lead to a prosperous renaissance or to a continued and sustained cycle of disaster and recovery.””