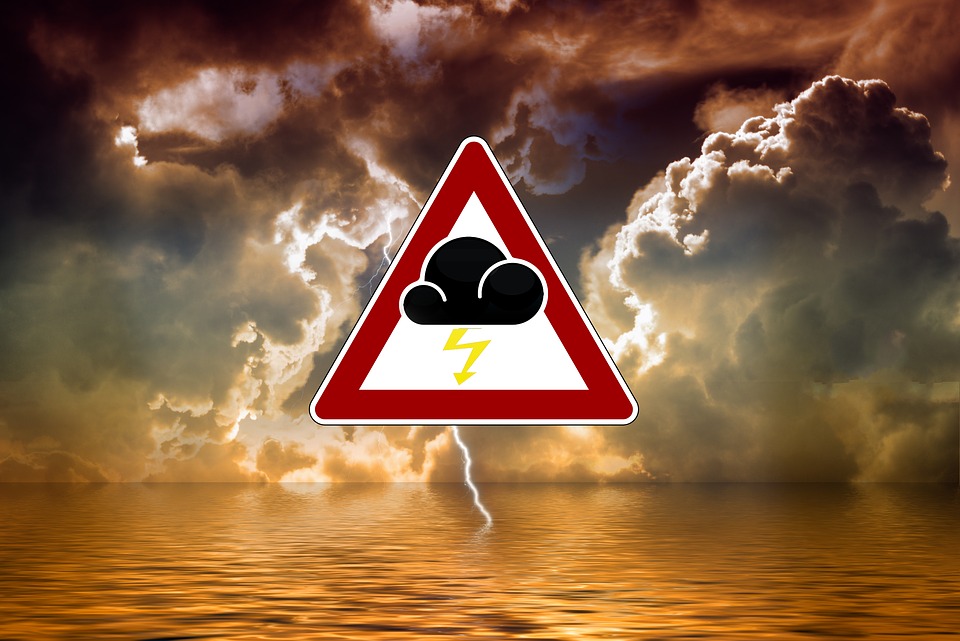 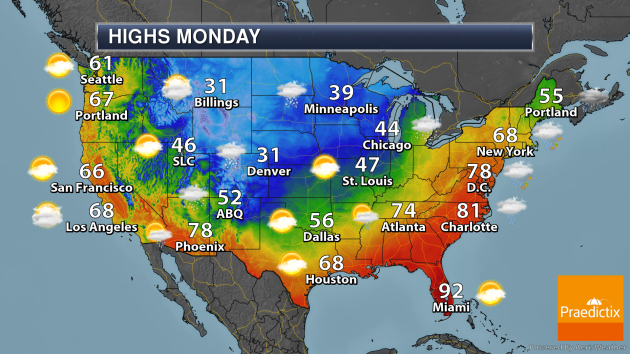 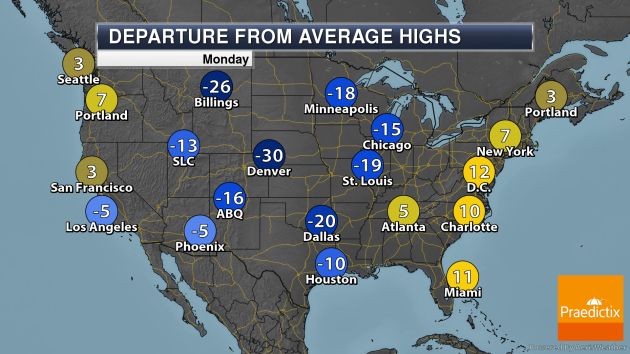 On Monday, the storm system responsible for snow in the upper Midwest and severe weather in the Deep South Sunday will continue to move to the northeast, positioned over the Great Lakes region in the morning hours and moving into Canada throughout the day. This will continue to bring showers and thunderstorms across the eastern United States, with snow expected in the northern Great Lakes. A few of the storms along the Eastern Seaboard are expected to be severe, and strong wind gusts outside of the storms will be possible. Elsewhere, a system will bring some rain and snow across the Four Corners region. 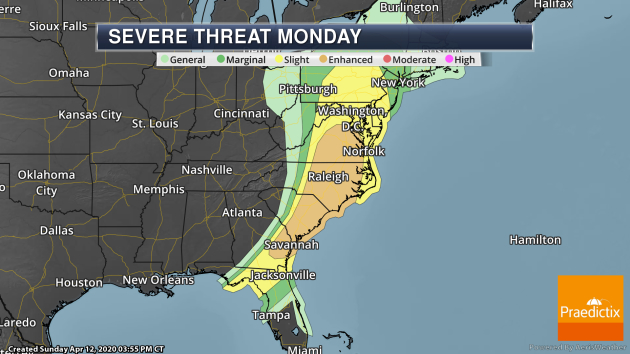 The greatest potential of strong to severe storms Monday will be from Virginia into southeastern Georgia, where an Enhanced Risk of severe weather is in place. Tornadoes, damaging winds, and hail will be possible. 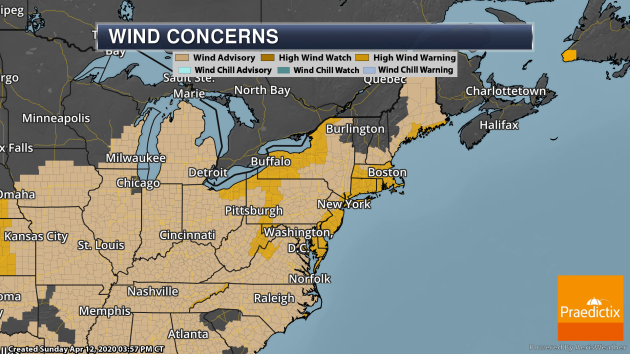 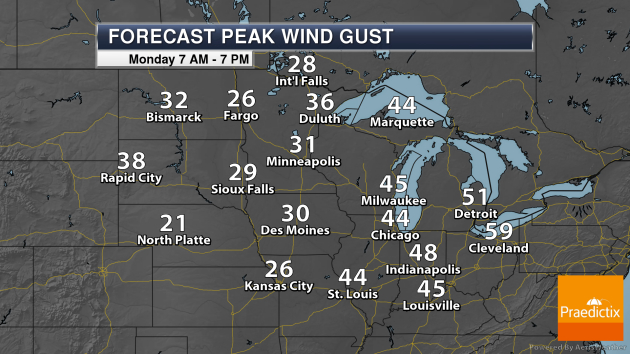 This system will also continue to produce strong winds in the eastern United States, especially in the Great Lakes and Northeast. In these areas, we have High Wind Warnings in place as we go into Monday. In these areas, wind gusts over 50-60 mph will be possible. 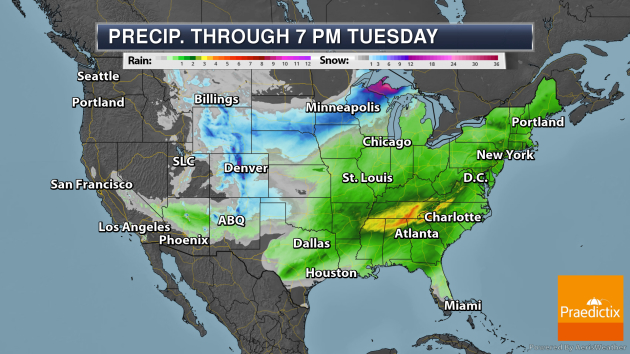 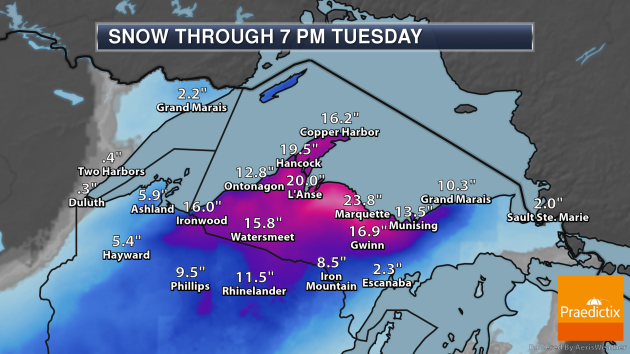 The heaviest rain from Sunday through Tuesday evening will fall in portions of the Deep South and Southeast, where rainfall tallies of 3-5″ are possible. Meanwhile, areas of the Northeast could see at least 1-2″ of rain on Monday. The heaviest snow will fall in the U.P. of Michigan, where some areas could see over two feet of snow. Out in Colorado, 1-1.5 feet of snow will be possible in portions of the Rockies.

More from USA Today: “Before group limits and social distancing due to coronavirus, the congregation of Ebenezer United Church of Christ in Levasy, Missouri, still gathered each Sunday, about 60 to 70 strong. They just weren’t meeting in tiny Levasy, just a few stone throws from the Missouri River. A levee breach last spring covered the community in floodwaters nearly a foot high. Now Jeanne Lischer, the church’s pastor, addresses her flock in nearby Buckner, at the Heart of God Fellowship’s former building after that church built a new facility north of town. The church’s move was one of the countless consequences of flooding last year that battered the river’s levee system, inundating towns and farmland and causing multiple closures to the region’s interstate highway system. And while the Ebenezer faithful pray they might be able to rebuild in their town, a more immediate concern is what could happen this year when the spring snowmelt and rains make their way to the river.”

More from the Omaha World-Herald: “Runoff into the upper Missouri River was almost double the average in March, and higher-than-average runoff is expected into the foreseeable future, according to the U.S. Army Corps of Engineers, which manages the dams on the upper river. The reason: Despite recent relatively warm, dry weather, soil moisture remains high and so do streams. That means heavy rains are less likely to be absorbed into the soil and will more easily overflow rivers.”

Can the world’s most influential climate report carry on?

More from Nature: “With science around the world grinding to a halt as a result of efforts to contain the spread of the COVID-19 coronavirus, the Intergovernmental Panel on Climate Change (IPCC) is struggling to keep the world’s next big global-warming report on track. Hundreds of scientists are working with the international panel to assess the science of climate change as well as the efforts to curb greenhouse-gas emissions and prepare for inevitable impacts. The next big report — the IPCC’s first in about seven years — is due out next year, and is intended to guide government actions. But that timeline is already under threat due to government lockdowns, travel bans and university closures.”