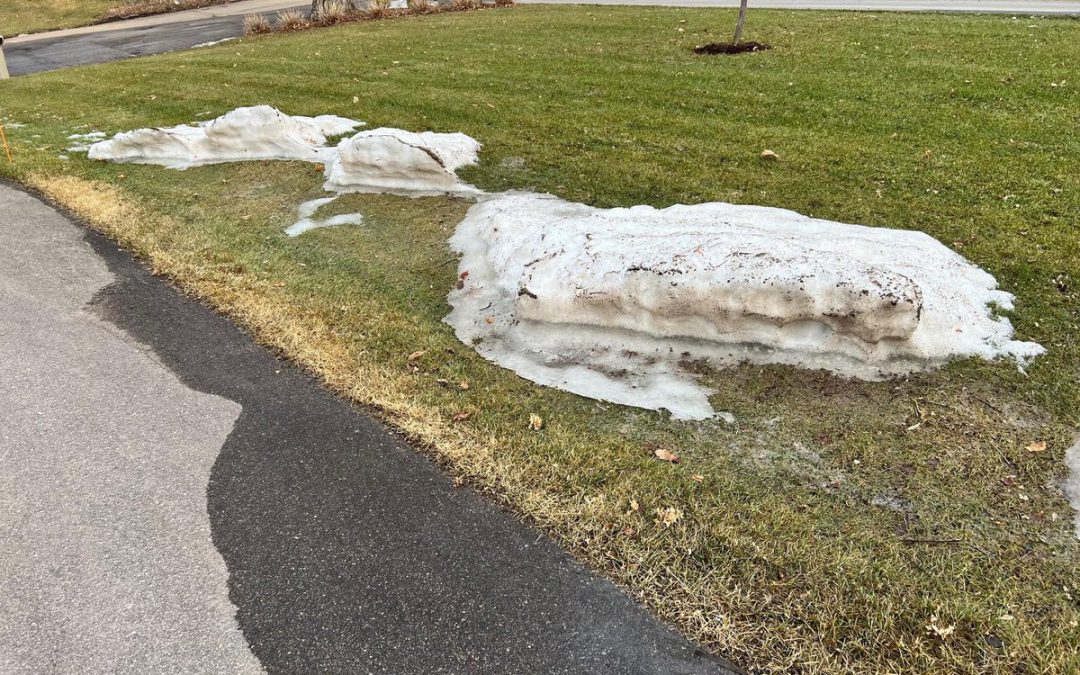 A withering drought continues for much of the western USA, long-track tornadoes may grind across Louisiana and Mississippi later today and massive wildfires are burning from Texas to the Florida Panhandle. So remind me not to whine about puddles, potholes, muddy shoes and a little Wednesday slush.

Mercifully, today’s storm will drop a cold rain on Minnesota. Rainfall amounts may exceed half an inch, with enough cold air wrapping into the storm’s circulation for a changeover to slushy snow tonight into Wednesday morning. I can’t get excited about snowfall amounts (maybe a coating to an inch in the metro area but 3-6” from Brainerd and Duluth north to the Arrowhead).

I see a run of 40s and a few 50s into late March; a few degrees above average.

Nothing polar – no subzero relapses or snowy punches.

Mostly Rain. Temperatures cool through the 40s today with mostly rain through the evening hours. Wet snow mixes in overnight with a slushy coating possible by Wednesday morning.

Severe Threat Ramps Up. Here is an excerpt of a Praedictix briefing issued yesterday:

Moderate Severe Threat Tuesday. As we head into Tuesday and Tuesday Night, the severe storm threat will ramp up with an outbreak of severe storm expected. Due to it, a Moderate Risk of severe weather (threat level 4 of 5) is in place across portions of Louisiana and Mississippi, including Baton Rouge (LA), Jackson and Hattiesburg (MS). The potential exists for significant and damaging tornadoes, along with large hail and damaging winds.

Greatest Tuesday Threat: Tornadoes. The greatest threat from this expected outbreak of severe storms on Tuesday across the Deep South will be tornadoes – some of which could cause significant damage. The threat of tornadoes will occur in both the line of storms moving across the region as well as individual storms that form in front of that band of storms.

Hail And Wind Also Possible. While tornadoes appear to be the highest threat from storms on Tuesday across the lower Mississippi Valley and Deep South, damaging winds and large hail will also be possible.

Flooding Risk The Next Couple Of Days. This system will also produce the potential of flooding rains across the southern United States over the next couple of days. Both days have a Moderate risk of excessive rainfall that could lead to flooding. Today and tonight the highest threat is across portions of eastern Texas, western and northwestern Louisiana, and southern Arkansas. Model guidance shows the potential of 3-6” of rain (with locally higher amounts) through early Tuesday morning across this region. This heavy rain could lead to an area of more numerous flash flooding events – some of which the Weather Prediction Center says, “could be locally significant.” The threat moves east over Louisiana, Mississippi, and Alabama as we head into Tuesday and Tuesday Night, with the potential of 2-4” with locally up to 7” in a 24-hour period. Recent heavy rain has left the soil quite saturated and streamflow conditions elevated. Therefore, this additional heavy rain could lead to additional flooding concerns.

Flood Watches And Rainfall Amounts. From tonight into Tuesday Flood Watches are in place across portions of the lower Mississippi Valley, including Houston (TX), Arkadelphia and Pine Bluff (AR), Monroe and Baton Rouge (LA), and Jackson, Hattiesburg, Meridian, and Columbus (MS). Again, at least 2-5” of rain can be expected from eastern Texas into the Deep South over the next couple of days.

Snow And Ice Amounts. Snow will be possible from the Rockies to the Great Lakes. In some areas of the North Shore of Minnesota, 7-11” of snow – with isolated 15” amounts – will be possible. Some areas of northern Minnesota could also see up to 0.25” of ice. Snow and ice could lead to travel concerns.

Severe Risk Extends Into Wednesday. The system that is causing our severe threat the next few days will continue to move east as we head into Wednesday with a cold front trailing into the Southeast United States. This will continue to spark the threat of severe weather for the middle of the week, with a Slight Risk (threat level 2 of 5) in place from southern Virginia to the central Gulf Coast. Damaging winds, hail, and tornadoes will continue to be possible.

It’s 70 Degrees Warmer Than Normal in Eastern Antarctica. Scientists are Flabbergasted. That’s probably not a good omen – here’s an excerpt from MSN.com: “The coldest location on the planet has experienced an episode of warm weather this week unlike any ever observed, with temperatures over the eastern Antarctic ice sheet soaring 50 to 90 degrees above normal. The warmth has smashed records and shocked scientists. “This event is completely unprecedented and upended our expectations about the Antarctic climate system,” said Jonathan Wille, a researcher studying polar meteorology at Université Grenoble Alpes in France, in an email. “Antarctic climatology has been rewritten,” tweeted Stefano Di Battista, a researcher who has published studies on Antarctic temperatures. He added that such temperature anomalies would have been considered “impossible” and “unthinkable” before they actually occurred...”

Science Says Keeping Shoes Outside May Improve Your Home’s Indoor Air Quality, According to Two Scientists. A post at Martha Stewart caught my eye; here’s a clip: “…According to their research, some of the microorganisms present on shoes and floors are drug-resistant pathogens that are difficult to treat. Additionally, when you wear your shoes inside you may also be tracking cancer-causing toxins from asphalt road residue and lawn chemicals into your home. A primary focus of their work involves assessing the levels of potentially toxic metals inside homes across 35 different countries. The contaminants are odorless and colorless, meaning there’s no way to determine if they’ve been brought into your home by your shoes…”

March 22, 1991: A historic ice storm begins during the afternoon and ends as heavy, wet snow on the 23rd. This event coated the city of Duluth with as much as 6 inches of ice. The 850-foot WIDO TV tower was toppled. 4 million pine trees were damaged or destroyed with the heaviest damage at G.C. Andrews State Forest near Moose Lake in Pine County.

Climate Change is Making Armed Conflict Worse. Here’s How. A post at The New York Times connects the dots: “…Climate change can intensify the risks. A hotter planet often makes dry places drier and hotter, supercharging competition over an already-scarce resource. How much of a role climate change plays in each conflict is hard to know, and, most certainly, poor management and rising demand for water play a role equally if not more important. But, said Peter Gleick, president emeritus of the Pacific Institute, who has studied water conflicts for decades, “climate change is unambiguously worsening the very conditions that contribute to water conflicts: drought, scarcity and inequities.” Water conflicts have gone up sharply in the last 20 years, the study found…”

Biden’s Chance to Tackle Climate Change is Fading Amid Global Energy Upheaval. The Washington Post has analysis: “As the war in Ukraine has raised oil prices and launched Western leaders on a global hunt for new sources of energy, environmentalists have tried to leverage the chaos in energy markets to move the United States off fossil fuels. But there’s a problem: Despite major advancements in wind and solar power — and renewed investor enthusiasm — Democrats, who narrowly control Congress, have yet to devise a legislative strategy that could accelerate this shift. And without major climate legislation soon, President Biden is likely to lose his opportunity to transform the nation’s energy mix during his first term. Experts say that for the United States to supercharge renewable power, lawmakers have to lower the upfront costs of building wind turbines, solar arrays and energy battery storage through federal tax breaks and other incentives...”

Climate Change: Wildfire Smoke Linked to Arctic Melting. BBC News explains: “The dense plumes of wildfire smoke seen in recent years are contributing to the warming of the Arctic, say scientists. Their study says that particles of “brown carbon” in the smoke are drifting north and attracting heat to the polar region. The authors believe the growing number of wildfires helps explain why the Arctic is warming faster than the rest of the planet.They’re concerned that this effect will likely increase. Over the past decade, smoke from raging wildfires in Australia, Portugal, Siberia and the US have changed the color of the skies. The smoke has impacted human health, and the amount of carbon released by the burning has helped push emissions to record levels. But now scientists say that all this burning has contributed to another serious issue – the loss of sea ice in the Arctic...”

Kuwait, Among World’s Hottest Places, Lags on Climate Action. AP News reports: “It was so hot in Kuwait last summer that birds dropped dead from the sky. Sea horses boiled to death in the bay. Dead clams coated the rocks, their shells popped open like they’d been steamed. Kuwait reached a scorching temperature of 53.2 degrees Celsius (127.7 degrees Fahrenheit), making it among the hottest places on earth. The extremes of climate change present existential perils all over the world. But the record heat waves that roast Kuwait each season have grown so severe that people increasingly find it unbearable. By the end of the century, scientists say being outside in Kuwait City could be life-threatening — not only to birds. A recent study also linked 67% of heat-related deaths in the capital to climate change…”