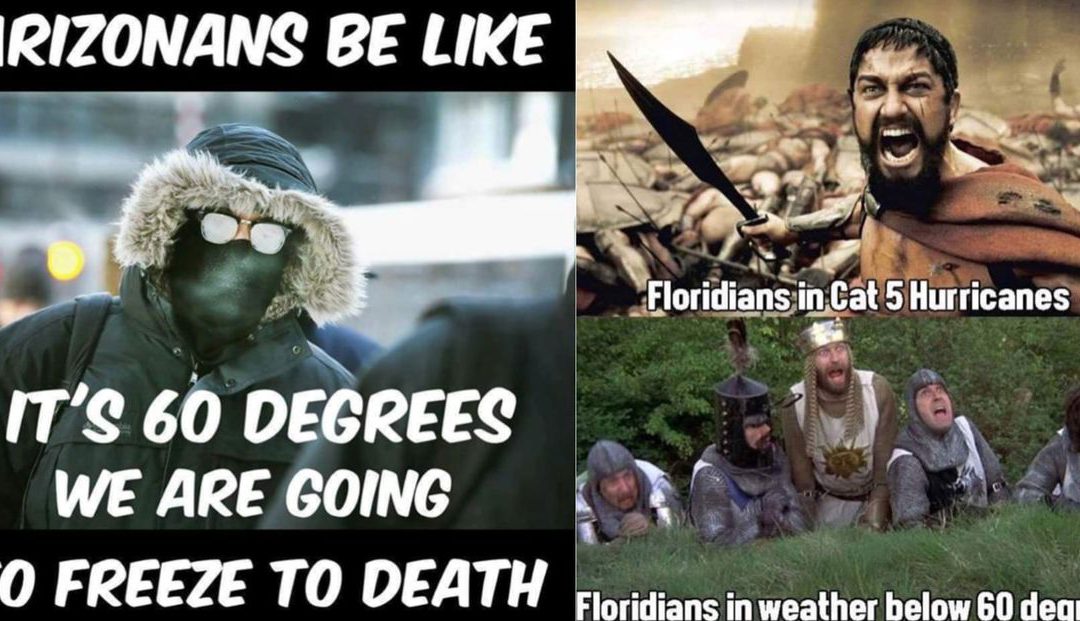 It’s not the heat, it’s the humidity. It’s not the cold, it’s smug snowbirds in Florida trolling me about our hearty Minnesota winters. Where are these people during hurricane season?

One important note to share when you’re trading weather insults: Minnesota is NOT the coldest state in the union. According to NOAA data highlighted at Minnpost, Alaska is coldest, followed by North Dakota. Minnesota is tied with Maine for 3rd coldest, based on year-round average temperatures.

Nights are long and snowy across Canada, which has been transformed into an unwilling incubator of arctic cold fronts. No record cold is brewing, but over the next 10 days I envision 7 or 8 subzero nights with subzero highs for much of Minnesota Thursday. Cool.

The pattern favors big snowstorms for the east coast (what a waste of cold air) with a coating here Friday night; maybe a couple inches late Sunday. No big weather drama.

Minnesota winters are not for the faint of heart. Even so, we still like it here.

Today: Last Thaw in Sight. Mid to upper 30s will feel pretty amazing today (only in Minnesota). Soak it up, because another cold correction is on the way for Wednesday, in fact temperatures trend colder than average through next week, with little chance of a real snowstorm anytime soon.

Limping Out of the Deep Freeze. Any moderation in late January and the first few days of February will be gradual, but I do see a grudging warm-up within about 2 weeks with fewer nights dipping below zero as we push into February.

How Cold is Minnesota? Pretty darned cold, thank you. But it’s not the coldest state in the lower 48 states, according to an illuminating post at Minnpost: “One measure of coldness is the mean temperature over time: an average of all the temperature readings across the state over time. By this metric, Minnesota is cold, but not the coldest state. The state’s average annual recorded temperature between 1901 and 2000, a time period that allows easy comparison with other states, was is 40.1 degrees Fahrenheit. That puts Minnesota tied for second in the lower 48, along with Maine. North Dakota is the coldest in the contiguous U.S., at 39.7 degrees on average. Alaska’s data only go back to 1925, but it undeniably ranks coldest among all U.S. states, at an annual average of 26 degrees between 1925 and 2000...”

Inside Clean Energy: Here Come the Battery Recyclers. Inside Climate News has the post; here’s an excerpt: “…It’s important because the growth of electric vehicles and battery storage systems will eventually lead to millions of tons of batteries that are unusable unless they are recycled. And it’s exciting because researchers and entrepreneurs are coming up with cost-effective ways to reuse most of that waste. The recycling industry is changing and growing to prepare for a projected five-fold increase in the amount of lithium-ion batteries available for recycling globally by 2030, according to figures from Li-Cycle and Benchmark Mineral Intelligence. Lithium-ion batteries are used to power electric vehicles, battery storage and consumer electronics. The batteries contain rare and expensive metals like cobalt and nickel…”

6” snow on the ground at MSP International Airport on Monday.

January 18, 1996: A blizzard begins across the upper midwest. The Twin Cities Airport was spared the heavy snow, but received nearly one inch of rain. Heavy ice coating in the northwest metro area caused thousands of power outages. Wind chills were as low as -88 (on the old windchill scale) at Crookston. Snow totals were 18 inches at Ely and 12 inches at St. Cloud. Mail delivery was stopped for the day in Duluth and I-94 was closed all day from Rothsay and Moorhead. Flooding problems were caused in the Twin Cities due to backed up water.

January 18, 1994: Governor Arne Carlson orders all Minnesota public schools closed due to the extreme cold and severe winter weather. Morning readings were in the 30-below-zero range. The biggest problem was from high winds that came with the cold.

NASA’s data on rising temperatures over the decades.Illustration: NASA/NOAA

The World Was Cooler in 2021 Than 2022. That’s Not Good News. WIRED.com explains why; here’s a clip: “…Today’s findings are all the more alarming precisely because 2021 managed to overcome these cooling effects and still tally the sixth-highest temperature. And while global temperatures were cooler in 2021 than the year before, last year 1.8 billion people lived in places that experienced their hottest temperatures ever recorded, according to a report released today by Berkeley Earth. This includes Asian countries like China and North and South Korea, African nations like Nigeria and Liberia, and in the Middle East places like Saudi Arabia and Qatar. “We talk a lot about global average temperatures, but no one lives in the global average,” says Zeke Hausfather, a research scientist at Berkeley Earth. “In fact most of the globe, two-thirds of it, is ocean, and no one lives in the ocean—or very few people at least. And land areas, on average, are warming much faster than the rest of the world…”

The Climate Conversation No One Wants. Here’s an excerpt from an Op Ed at Foreign Policy: “…Even if all Glasgow pledges are fulfilled, we are still facing a temperature overshoot of approximately 2 degrees Celsius. In the more likely scenario of not all pledges being fulfilled, warming will be more: perhaps 3 degrees Celsius. This would be catastrophic in nearly every sense for large parts of humanity, especially the poorest and most vulnerable who are suffering first and worst from escalating climate impacts. Extreme weather events are becoming much more frequent, and no one will be totally immune, as we saw with Europe’s 2021 floods and Colorado’s recent fires. Remember this word: overshoot. It will gain increasing importance as the herculean difficulty of reducing emissions to net zero and removing vast stores of carbon from the atmosphere become clearer. On top of this, there is a still greater challenge: moving to net-negative emissions thereafter, which the Intergovernmental Panel on Climate Change (IPCC) says will also be needed…”

Be Ready to Change: Climate Change and Farming. Another Op Ed at Lancaster Farming caught my eye; here’s a clip: “…Farms have to be ready to change. What exactly this means for your farm I’m not sure, in part because scientists are still trying to work all that out. Cover crops will probably be in the mix somehow. But recent reporting has indicated that two of agriculture’s most-heralded climate strategies — carbon sequestration and cell-culture meat — may be far less practical than their proponents have claimed. Still, the United States is hoping to innovate its way out of a climate crisis. If predictions are to be believed, that might be our only option besides annihilating our standard of living. It’s worth remembering, though, that a given industry is only responsible for its sliver of the solution. It’s not on farmers to cut the emissions of airplanes or power plants, and it’s not vegetable growers’ job to deal with cow belches. My point is not so much to promote specific solutions as to encourage a state of mind that will make adjustments possible...”