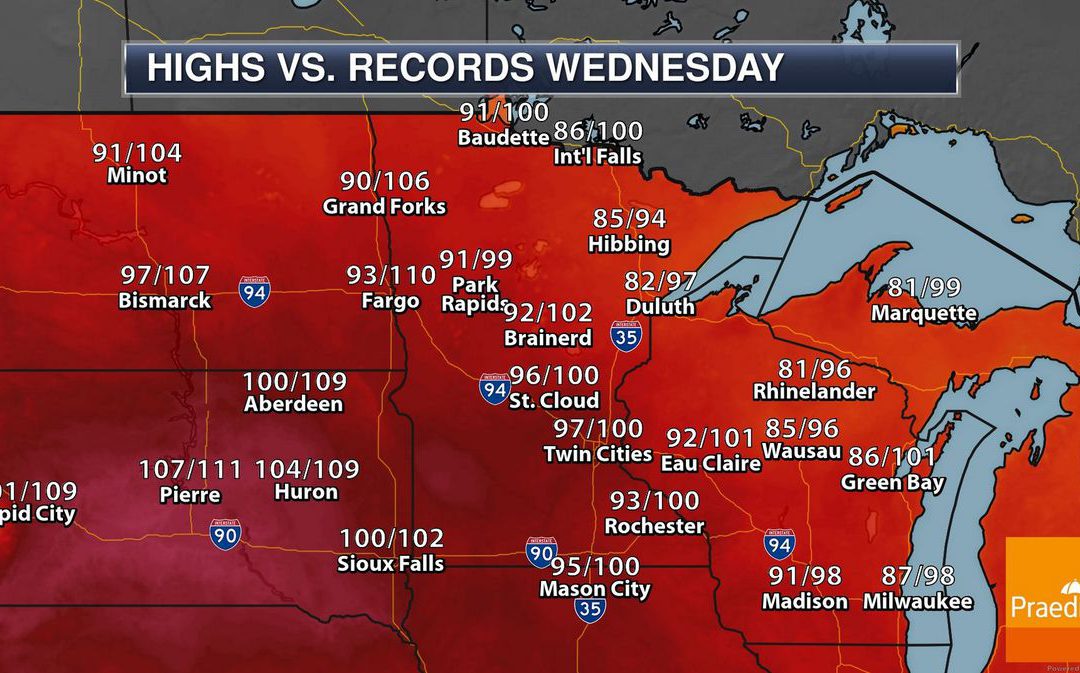 Based on predicted heat indices today will, in all probability, feel like the hottest day of the year. Unlike June, when we saw 90s (99F on June 5) with dry air, today’s upper 90s will be accompanied by a dew point in the 70s, making it feel as hot as 105-110F by late afternoon. Check on neighbors to make sure they are keeping cool. Don’t even consider leaving a child in a vehicle. In a matter of minutes on a day like today temperatures rise to 115-120F inside a car or truck. An estimated 900 US children have died in hot vehicles since 1990.

Temperatures peak today, with a good chance of strong to severe thunderstorms bubbling up by afternoon. A transfusion of fresh, Canadian air drops temperatures to tolerable levels and lowers dew points and humidity levels starting tomorrow – relatively comfortable weather lingers into the weekend. I’ve never been happier to see a streak of 80s coming up.

Odds favor more smoke and lingering drought into early autumn. Hoping for a string of soakers in October.

Dangerous Heat Indices Today. The bad news: it may feel like 105F by late afternoon, factoring temperature and dew point. The good news: dangerously hot weather will not stick around for long – just one very uncomfortable day (today) before relief arrives.

Back to the 80s. Any other summer the predicted (NDFD) temperatures above would be considered a respectable warm front. But this year 80s represent relief, especially factoring in lower dew points in the 50s by late week. More comfortable days ahead…

Relatively Comfortable First Week of August. The core of the westerlies sag southward over the next 2 weeks, meaning more frequent intrusions of cooler, less humid air over northern tier states. I’m fairly sure the heat will return later in August, although hopefully not with the frequency and intensity we’ve witnessed in June and July.

MSP: 5”+ Rainfall Deficit Since June 1. Although there are regional variations, I’m struck by how much real estate from Wisconsin to the Dakotas is suffering from a 3-5” rainfall deficit. To put that into perspective, that’s a month’s worth of rain we just went without since June.

Big Hail Up North Late Monday. Here’s a clip from Bring Me The News: “…The Beltrami County Sheriff’s Office also posted a photo of a hailstone the size of a baseball, with the Facebook post drawing in further comments from people in the area who were also slammed by huge hail. Grand Rapids may have been hit the hardest, with reports of numerous trees down, bleachers flipped, a flag pole snapped in half and a stoplight knocked to the ground…”

Hot Start to Olympics Raises Health Concerns: Climate Nexus has headlines and links: “The 2020 Summer Olympics kicked off in Tokyo on Friday and there are already signs the toughest part of the competition may just be the extreme heat and humidity in what is expected to be the hottest Olympics on record. Temperatures in Tokyo this time of year are usually in the high 80’s, but a heat wave is pushing temperatures into the 90s. The heat index on Saturday made it feel like 100°F and humidity levels were above 80% on Sunday. Temperatures in July and August are 5.15°F/2.7°C warmer than they were last time Tokyo hosted the games in 1964, and on average, there are eight more days of 95-plus-degree weather. Athletes are feeling the heat already: ahead of the Opening Ceremony on Friday, Russian Archer Svetlana Gomboeva collapsed during a qualifying event due to the heat. The Tennis tournament, which began Saturday, was also affected by the heat, as Russian player Anastasia Pavlyuchenkova required a medical timeout after feeling dizzy due to the heat. Then, several athletes participating in the triathlon, which finished Monday morning, had to be helped off the track due to overheating. Extreme heat is now the deadliest weather event, and it is only getting worse as the planet continues warming. Despite this, currently, the International Olympic Committee doesn’t take climate change into consideration when selecting host cities. Japan’s proposal to host the 2020 games, for example, claimed “this period provides an ideal climate for athletes to perform their best” because of its “many days of mild and sunny weather.” (Overview: Wall Street Journal $, Popular Science; Weather: NBC News, Axios, Washington Post $; Gomboeva: Yahoo, Reuters $, AP; Tennis: Reuters $, AP, Insider; Health: Vox; Commentary: Dan Wetzel, Yahoo).

Using Satellites and AI, Space-Based Technology is Shaping the Future of Firefighting. NBC News reports: “…New programs are being developed by startups and research institutions to predict fire behavior, monitor drought and even detect fires when they first start. As climate change continues to increase the intensity and frequency of wildfires, these breakthroughs offer at least one tool in the growing arsenal of prevention and suppression strategies. “This is not to replace firefighting on the ground,” said Ilkay Altintas, a computer scientist with the University of California, San Diego, who developed a fire map for the region. “The more science and data we can give firefighters and the public, the quicker we’ll have solutions to combat and mitigate wildfires...”

New Study Debunks One of the Biggest Criticisms of Electric Vehicles. Here’s the intro to an explainer at Fast Company: “In the past, some studies claimed that electric vehicles (EVs) weren’t actually better for the environment: The energy used to make the battery plus the emissions from making electricity could make the total footprint worse than a gas-powered car. Or so the argument went. A detailed new report shows that isn’t true. No matter where an EV is used, even if it charges on an electric grid that uses coal power, it has a smaller carbon footprint than a fossil fuel-powered car. One factor is that it’s less polluting to make batteries than previously thought…”

Researchers Identify Battery Alternative to Slow Climate Change. WSKG.org has an interesting story – here’s an excerpt: “…The salt in most traditional batteries are lithium-ions. Takeuchi said the trouble starts with cost. Building enough lithium-ion batteries for renewable energy storage can be expensive. “There’s like one or two places on Earth where you can actually mine these elements. And one of the elements, cobalt, that’s used in lithium-ion, the biggest mines are all located in Congo, in Africa,” she said. The salt Takeuchi uses is made of manganese and zinc, instead of lithium. “If these batteries are really big, can we use elements, can we use materials that are not very dangerous, that are Earth abundant, that are readily available?” she said…”

93 F. high in the Twin Cities on Tuesday.

Heat, Floods, Fires: Jet Stream is Key Link in Climate Change Disasters. Bloomberg Green delves into rapid warming in far northern latitudes and the possible impact on jet stream wind speeds and configurations and the tendency for upper air blocking patterns: “…But the link between these far-flung extremes goes beyond warming global temperatures. All of these events are touched by jet streams, strong and narrow bands of westerly winds blowing above the Earth’s surface. The currents are generated when cold air from the poles clashes against hot air from the tropics, creating storms and other phenomena such as rain and drought. “Jet streams are the weather—they create it and they steer it,” said Jennifer Francis, a senior scientist at the Woodwell Climate Research Center. “Sometimes the jet stream takes on a very convoluted pattern. When we see it taking big swings north and big dips southward we know we’re going to see some unusual weather conditions…”

Climate Change to Bring More Intense Storms Across Europe. ScienceDaily reports: “Climate change is driving a large increase in intense, slow-moving storms, a new study by Newcastle University and the Met Office has found. Investigating how climate affects intense rainstorms across Europe, climate experts have shown there will be a significant future increase in the occurrence of slow-moving intense rainstorms. The scientists estimate that these slow-moving storms may be 14 times more frequent across land by the end of the century. It is these slow-moving storms that have the potential for very high precipitation accumulations, with devastating impacts, as we saw in Germany and Belgium...”

How to Win Big for the Climate: Rein in the “Super Polluters”. Here’s an excerpt of a post and summary at Nature.com: “A crackdown on a limited number of ‘hyper-emitting’ power plants could yield outsize cuts in the carbon emissions resulting from global electricity generation. Don Grant and his colleagues at the University of Colorado Boulder, combed an inventory of more than 29,000 fossil-fuel power plants across 221 countries to identify the world’s largest polluters as of 2018. They then calculated the potential emissions reductions that could be attained if the worst offenders boosted their efficiency, switched to lower-carbon fuels or implemented carbon-capture technologies. The team found that extreme emitters — power plants that ranked in the top 5% in terms of climate pollution — were responsible for 73% of global emissions from electricity generation…”