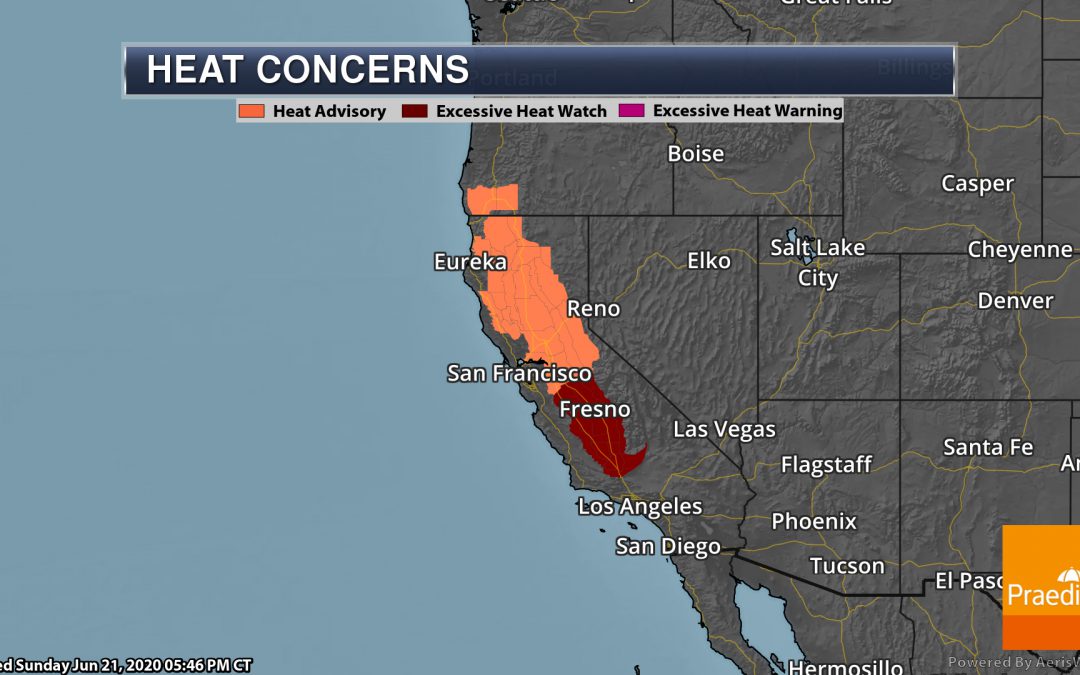 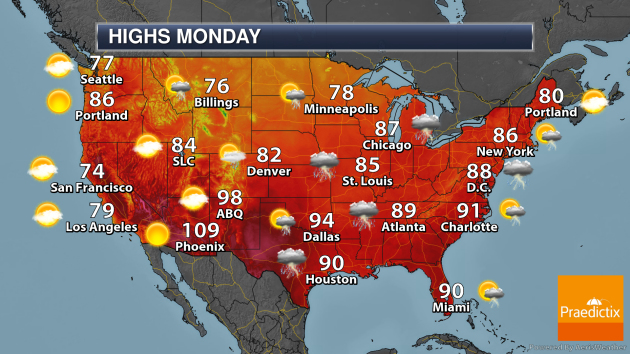 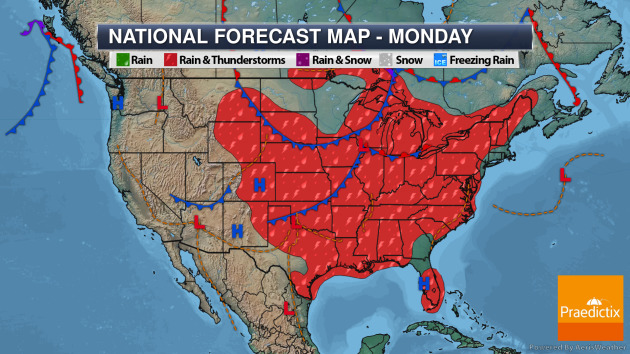 For Monday, we’ll watch the chance of some showers and storms mainly from the Rockies eastward as we go throughout the day. A few of the storms across the Central and Southern Plains could be on the strong side. Conditions look dry across the western United States. 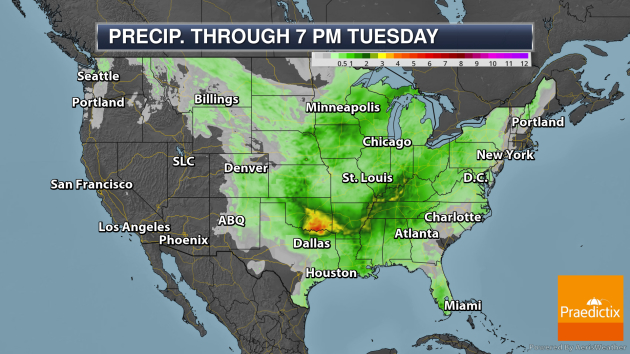 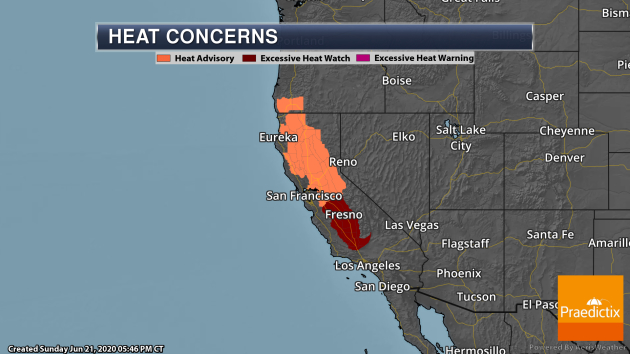 The heat is building out west as we head into the workweek, with many areas expected to reach the 90s to 100s at times from southwestern Oregon through central California. Numerous Heat Advisories and Excessive Heat Watches are in place across the region. Here’s a look at highs for the first half of the week: 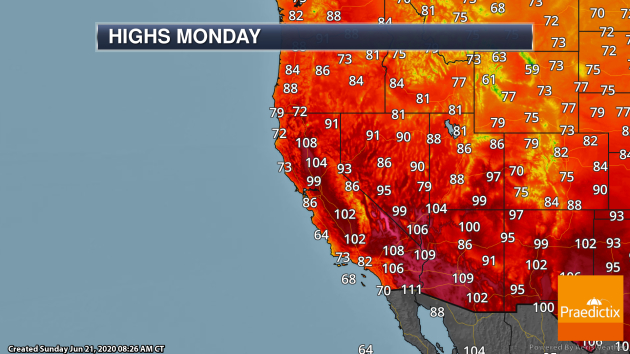 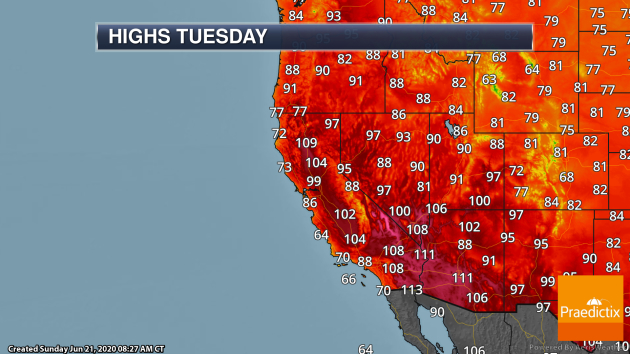 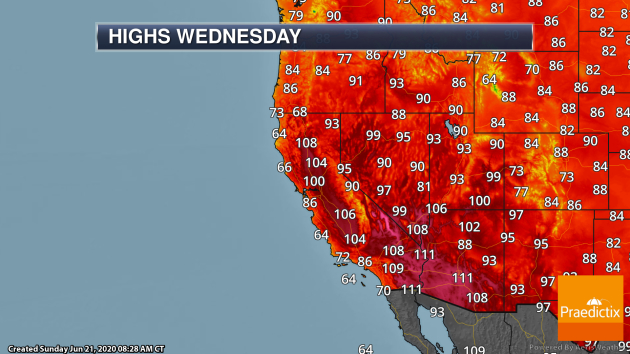 Is The Eastern Pacific Heating Up? 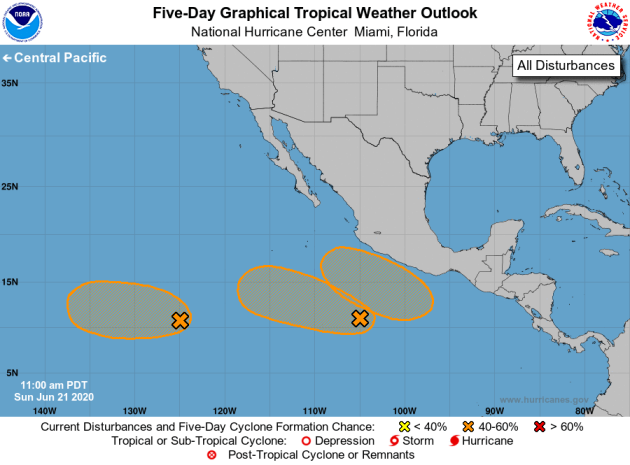 Is this the Eastern Pacific starting to wake up? The National Hurricane Center is tracking three areas that have the potential to become tropical systems over the next five days. Each of these systems has a medium chance of formation – the farthest west one has a 40% chance, with the two eastern ones having a 50% chance.

Quick System In The Atlantic? 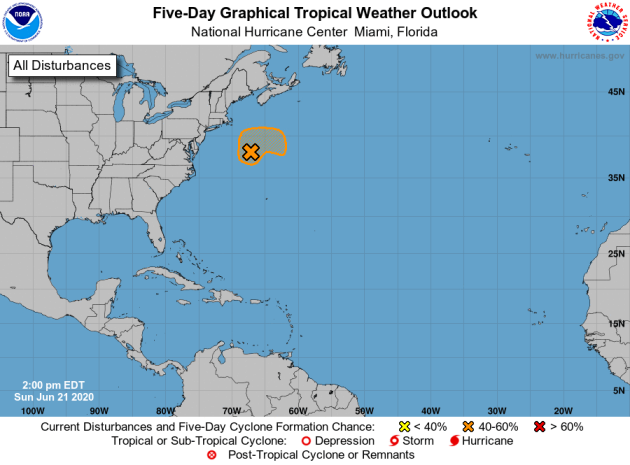 Meanwhile, the NHC is also tracking an area of low pressure that could quickly obtain subtropical characteristics Sunday Night into Monday morning before moving over cooler waters. There is a medium (40%) chance this low pressure area becomes a system.

It Was 100 Degrees in Siberia Saturday. Yes, That Siberia

More from Earther: “A freak heatwave has been scorching most of the Arctic for weeks now, but it broke records Saturday when the temperature hit 100.4 degrees Fahrenheit in a town in Siberia, one of Russia’s northernmost regions. It’s likely the hottest temperature ever recorded north of the Arctic Circle, CBS meteorologist Jeff Berardelli wrote on Twitter, though the recording is still pending verification. If you’re having trouble parsing why this is such a big deal, here’s a dose of perspective that’ll make your eyes bulge out: Verkhoyansk, a town that’s even farther north than Fairbanks, Alaska, has had the same number of 100-degree days on record as Miami, Florida. (Sure, it’s only one, but tell me that’s not insane.)”

More from the Portland Press Herald: “Add to the list of extraordinary events this spring a record lack of rainfall. According to data from the National Weather Service in Gray, the middle of May to the middle of June hasn’t been this dry in the Portland region in the nearly 150 years that such records have been kept. From May 15-16, when we had our last significant rainfall, through Thursday, this year has been “the driest by far” since at least 1871, according to meteorologist Chris Kimble of the weather service office in Gray. Most of the state is now classified as “abnormally dry,” a stage that immediately precedes the designation “drought.””

More from The Guardian: “More than a decade of overwhelming evidence links air pollution and heat exposure with negative pregnancy outcomes in the US, according to a new review of dozens of studies. The investigation, published in the Journal of the American Medical Association, identified 57 studies since 2007 showing a significant association between the two factors and the risk of pre-term birth, low birth weight and stillbirth. Black mothers were particularly at risk, as were people with asthma. The review analyzed 32m births tracked across 68 studies. Of those, 84% found air pollution and heat to be risk factors.”