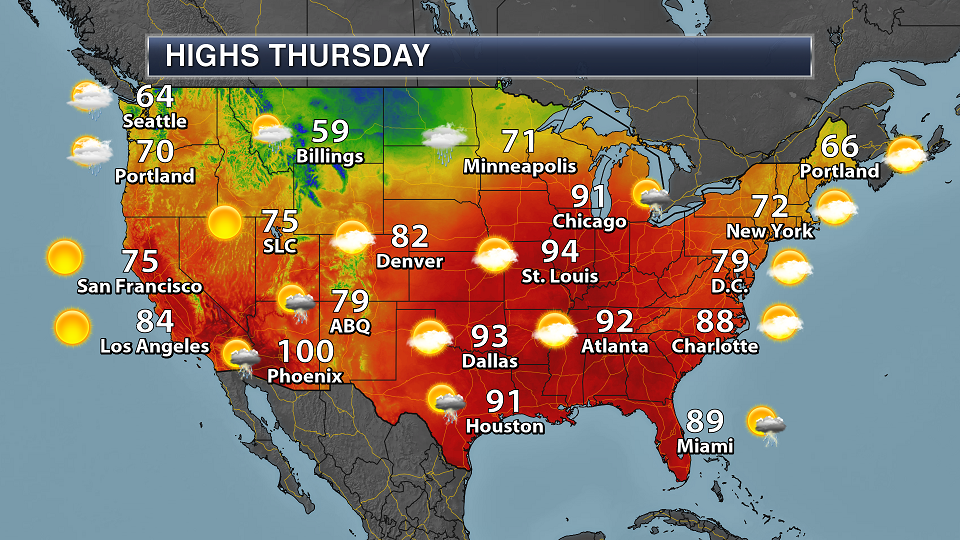 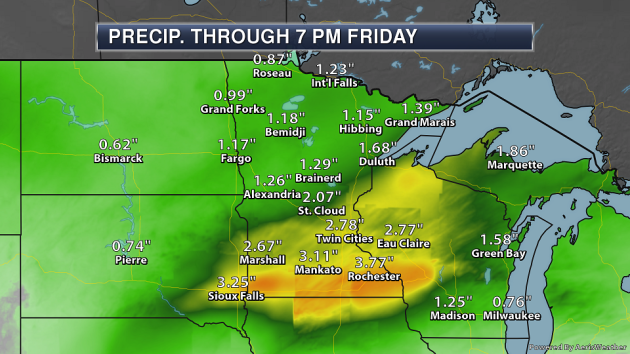 A storm system moving through the upper Midwest over the next couple of days is expected to bring heavy rain along with it, especially during the day Thursday. Rainfall totals from Wednesday to Friday evening could top 2-4″ from South Dakota into Wisconsin. This will have the potential to lead to some flash flooding. 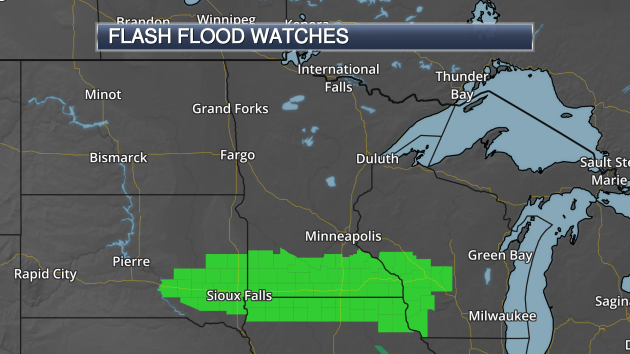 Due to the heavy rain potential, Flash Flood Watches are in effect from this evening into Thursday from South Dakota into Wisconsin. 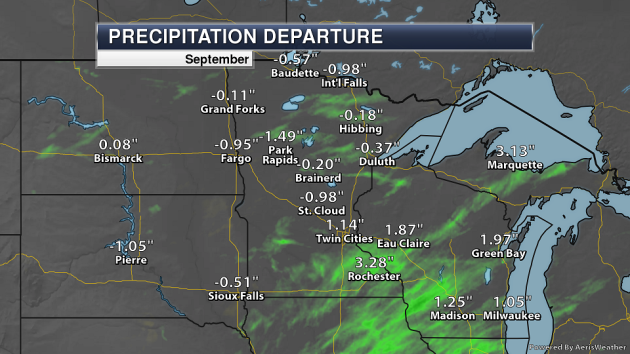 Some of this rain will impact parts of the state that have already received heavy rain this month. Through Tuesday, Rochester was already running over 3″ above average rainfall-wise so far this month, with the Twin Cities 1.14″ above average. With 5.42″ of rain in Rochester through Tuesday, it was the 6th wettest start to September on record, and if no additional rain fell it would be the 20th wettest September. Rochester only needs 1.05″ of additional rain to observe a top ten wettest September on record (the wettest was 1986 when 10.50″ fell). 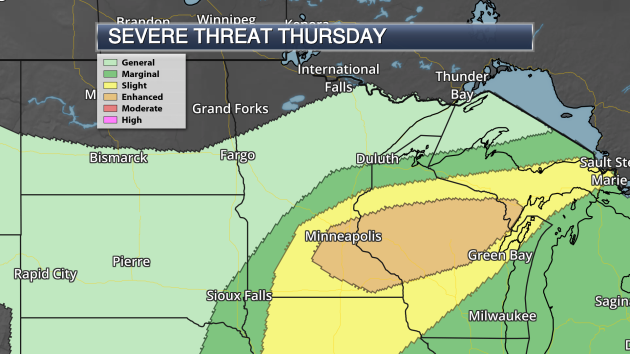 This system moving through Thursday will also bring the potential of strong to severe storms along with it. There is an Enhanced Risk of severe weather in place across parts of southern and eastern Minnesota into Wisconsin. Damaging winds and a few tornadoes would be the main threats, along with the potential of large hail especially early on. 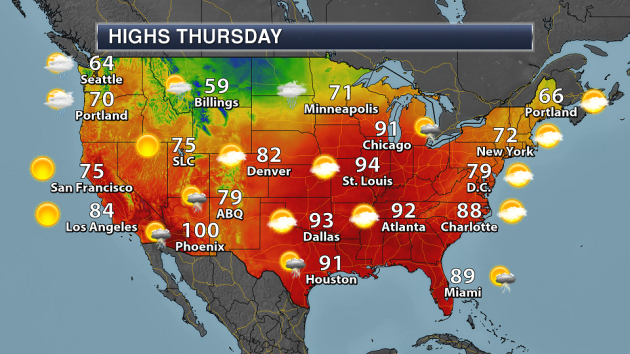 An area of low pressure will move through the upper Midwest Thursday, bringing showers and storms along with it. Parts of this region could see 1-2″+ of rain during the day. Showers and storms will be possible along the Gulf Coast and with a trough of low pressure extending along the Front Range. Some higher elevation areas of Washington, Montana and Wyoming could see some snow.

Two areas of heavy rain area expected through Monday morning. One of those areas is across the upper Midwest with a storm system moving through the region through the end of the week. Another area of low pressure moving across parts of the southern Plains Friday into the weekend will bring the potential of heavy rain as well from northern Texas to southern Missouri.

More from CNN: “Aerial images captured the destruction Hurricane Florence inflicted on the North Carolina coastline, from lines of houses shorn of their shingles to sand-covered streets. The pictures were shot by planes outfitted with cameras taking “high-definition aerial photos” and collected by the National Oceanic and Atmospheric Administration. The photos are vital to assessing damage and organizing the assistance that’s needed. The latest post-Hurricane Florence photos were taken Tuesday; NOAA told CNN that the pre-Florence photos were taken in 2014. In one image, the southernmost portions of Topsail Beach’s main thoroughfare, Anderson Boulevard, are still covered with dark standing water. Ocean Boulevard, one of the side streets, is completely covered with sand. ”

More from CNBC: “Florence, the storm that swept into the American Southeast as a hurricane last week, inundated wide swaths of the Carolinas, leaving more than 30 people dead.  The storm, which is now broken into remnants, moved out of the area, leaving behind massive destruction, including in the region’s agricultural industry.  North Carolina’s poultry sector suffered the loss of at least 3.4 million birds, including chickens and turkeys, as a result of Florence, the North Carolina Department of Agriculture and Consumer Services announced late Tuesday. The swine industry losses are now estimated at about 5,500 hogs, the department added.  Previously, one of the state’s major poultry producers had estimated the loss of about 1.7 million chickens.”

More from Grist: “As Hurricane Florence approached the Carolinas last week, up to 1 million residents boarded up their windows, emptied grocery shelves and gas pumps, and evacuated with their families to escape the storm’s impending wrath. Simultaneously, scientists in other parts of the country were scrambling to produce a landmark study: one that would put numbers to just how much worse climate change had made this dangerous storm.  They found that the slow-moving hurricane would bring 50 percent more rain to the Carolinas due to climate change. The researchers from Stony Brook University in New York and the Lawrence Berkeley National Laboratory in California released their findings on Wednesday — two days before the storm even made landfall.”

More from Utility Drive: “The New Jersey Board of Public Utilities (BPU) opened on Monday the largest single-state solicitation of offshore wind in the U.S., for 1,100 MW of capacity. The BPU aims to act on applications by July 1, 2019. Federal investment tax credits for offshore wind developers are currently set to expire at the end of next year and the BPU press release estimates tax credits could cover 12% of the total project’s price tag. Dem. Gov. Phil Murphy asked the BPU last week to open two additional 1,200 MW solicitations in 2020 and in 2022. The state is working toward a 3,500 MW goal of offshore wind capacity by 2030 and a 100% clean energy goal by 2050.”