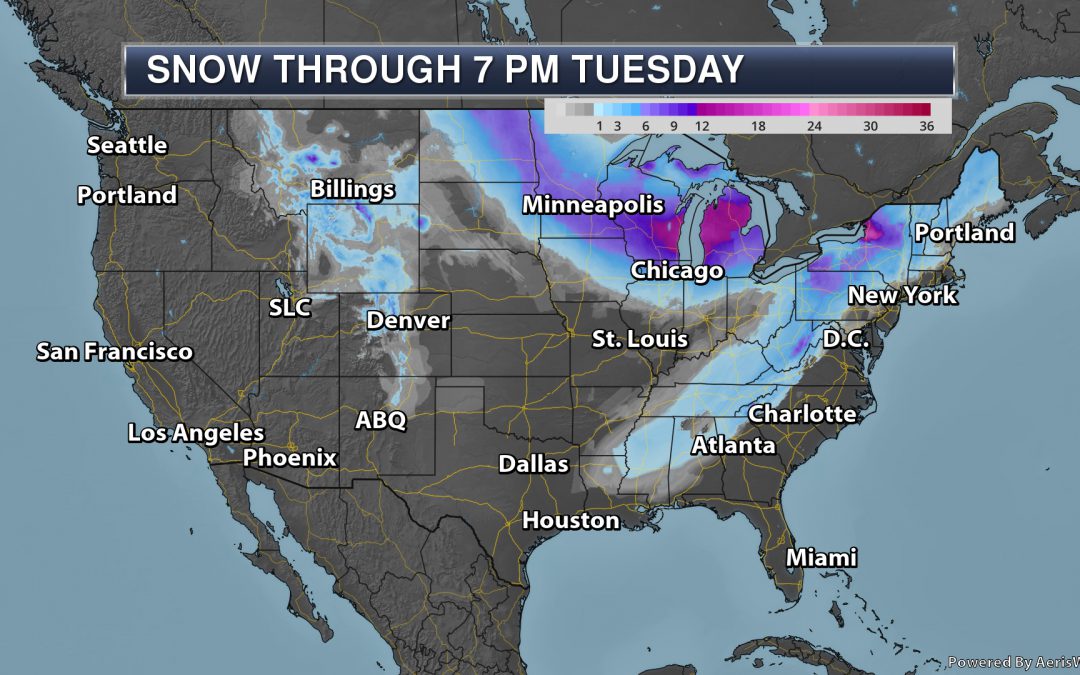 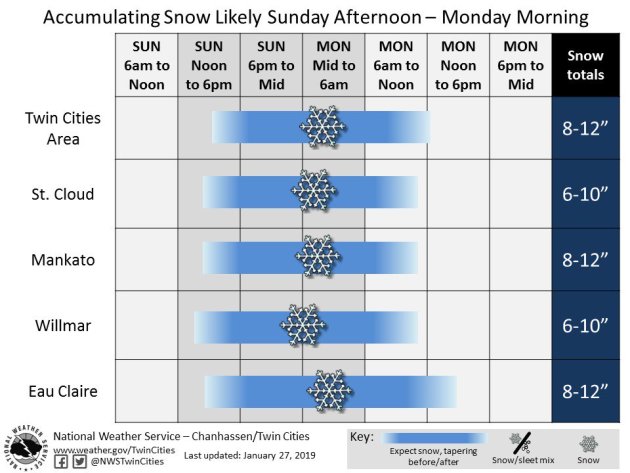 Snow is working its way toward the Twin Cities through the late afternoon hours on Sunday, and once it gets here it will continue through the mornings hours Monday. Here’s a look at timing for select cities across southern and central Minnesota and western Wisconsin, courtesy of NWS Twin Cities. This snow will impact the morning commute on Monday, so if you have to hit the roads please allow extra time to make it to your destination! 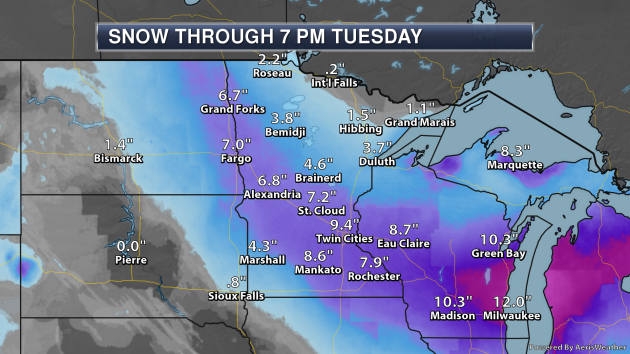 Here’s expected snow totals across the state. A swath of at least 6″ of snow is expected from the Grand Forks and Fargo areas southeastward along I-94 into the Twin Cities, and then southward including south-central and southeastern Minnesota. 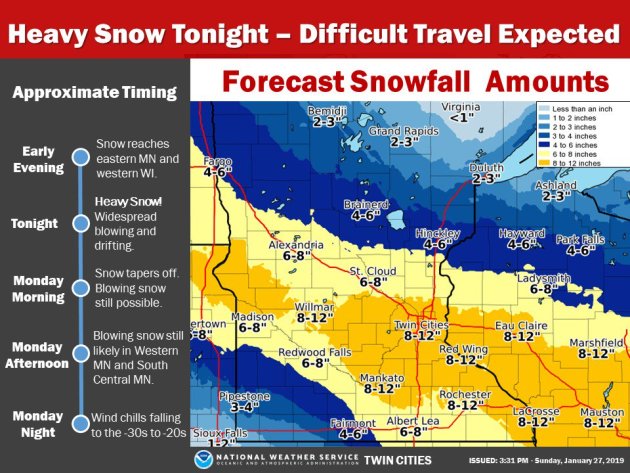 Here’s another way of looking at the expected snow totals, better divided up by amount ranges. You can see from out toward Wheaton through Willmar, the Twin Cities, and into southern Wisconsin a band of 8-12″ of snow is expected to fall. 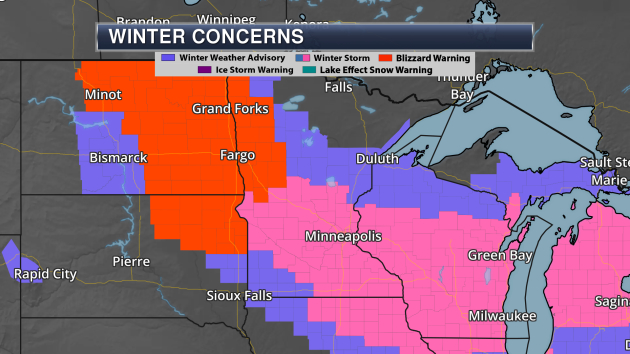 * WHAT…Heavy snow. Dangerously cold wind chills possible.  Additional snow accumulations of 7 to 11 inches with isolated  locations close to a foot of snow. Wind chills  as low as 50 below zero likely.

* WHEN…For the Winter Storm Warning, until noon CST Monday.  For the Wind Chill Watch, from Tuesday afternoon through  Thursday morning.

* ADDITIONAL DETAILS…Travel could be very difficult. Patchy  blowing snow could significantly reduce visibility. The  hazardous conditions could impact the morning or evening  commute. The dangerously cold wind chills could cause  frostbite on exposed skin in as little as 5 minutes.

The cold stretch of weather that has been advertised the past few days is almost here – I’ll start you off by looking at the bitterly cold highs and lows expected Tuesday through Thursday across the state. 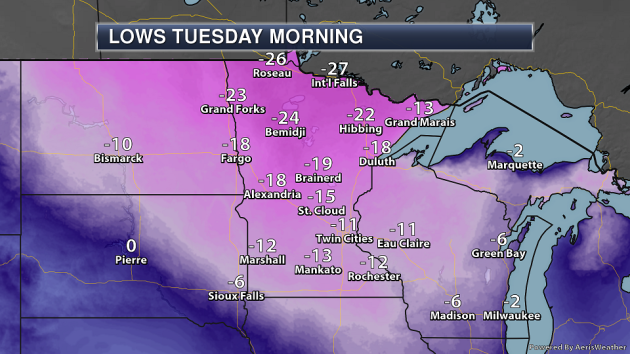 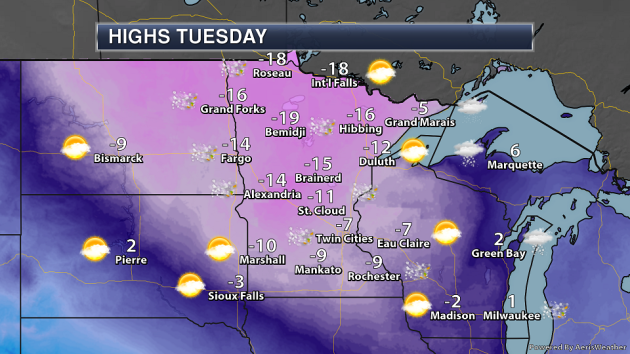 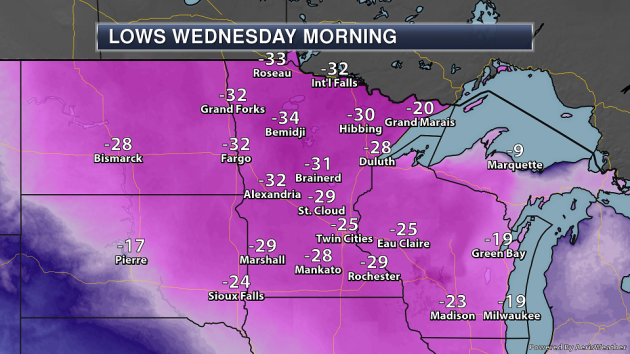 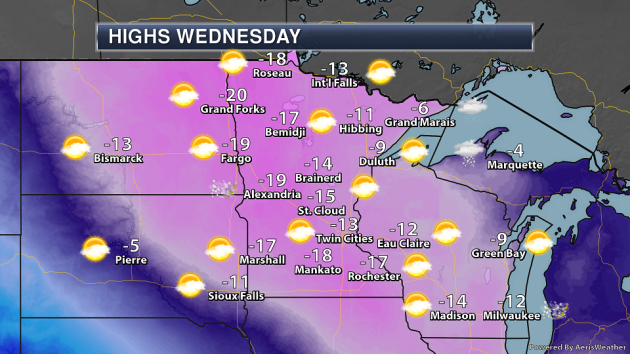 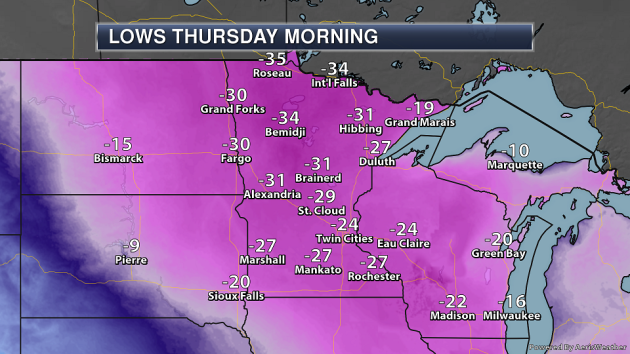 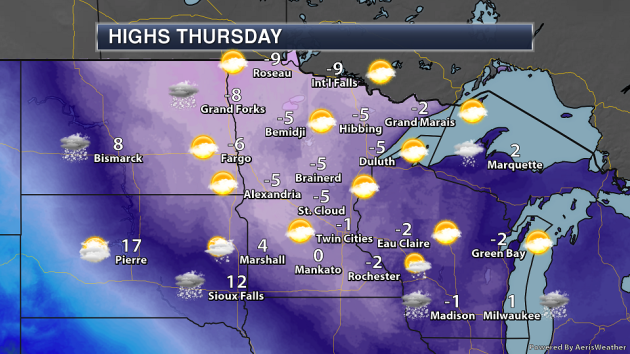 While the cold air starts to settle in Tuesday, the coldest day across most of the state will be Wednesday when highs won’t make it out of the double digits below zero in most locations. Right now it looks like we’ll have three days of below zero highs in the Twin Cities. Meanwhile, if International Falls can stay below zero Monday (forecast high is -1F), they’ll end up with seven days in a row with below zero temperatures before climbing back into the positive range with a high of 4F on Friday. That would be tied for the 10th longest below stretch on record in terms of number of days. The longest streak on record for International Falls is 14 days (January 2-15, 1912). 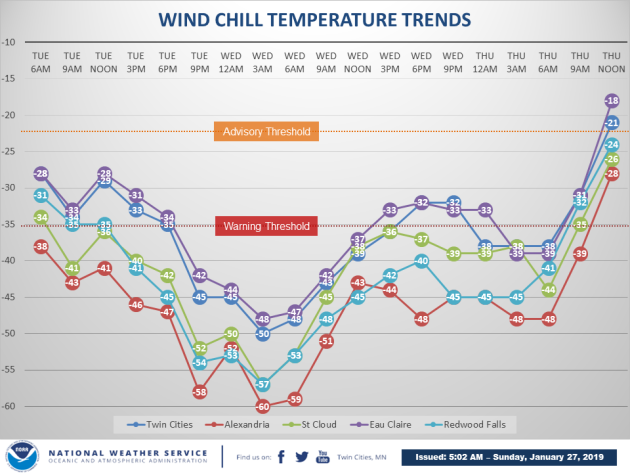 It won’t only be the actual temperature that will be dangerous – once you factor in the wind it’ll feel even worse. The coldest wind chills are expected Wednesday morning when even here in the Twin Cities we could see a wind chill value near -50F. Other parts of the state could see wind chill values approach -60F. 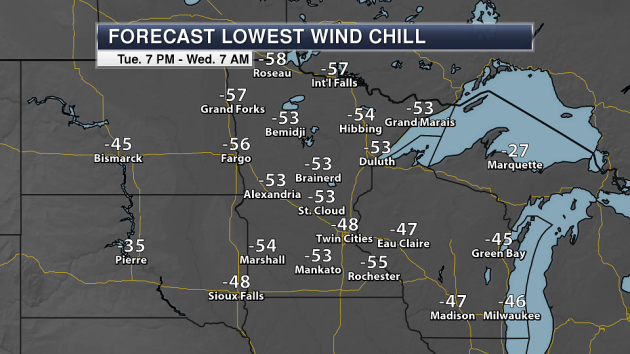 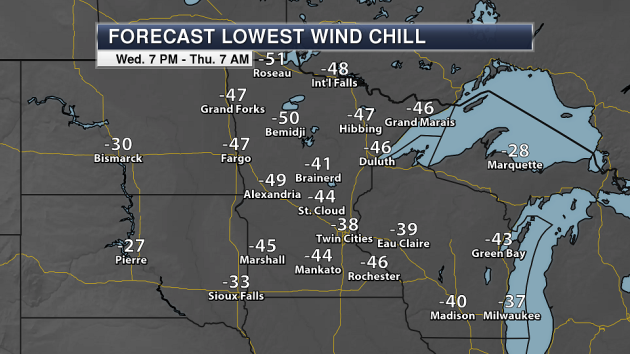 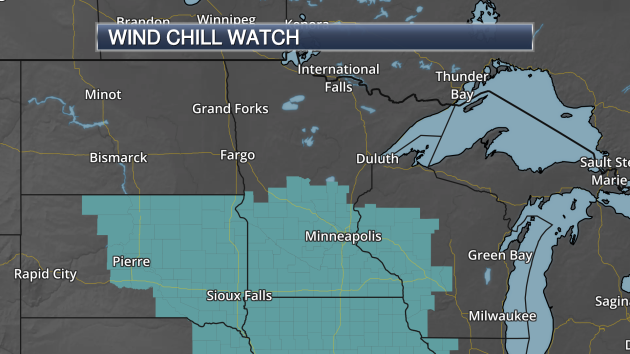 Due to these dangerous forecasted wind chills, Wind Chill Watches have already been posted for Tuesday through Thursday morning across parts of central and southern Minnesota. 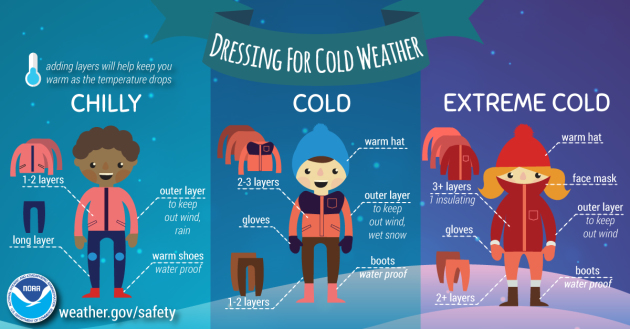 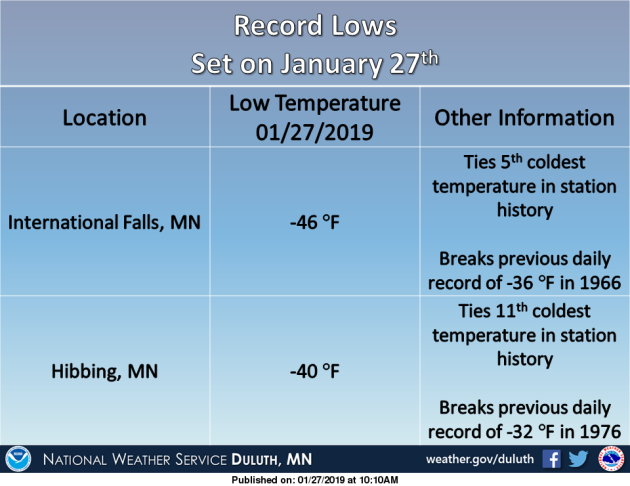 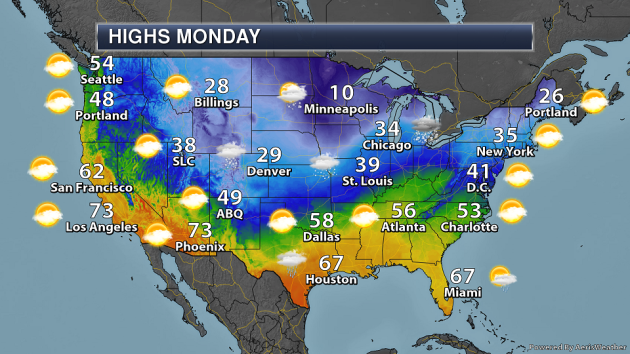 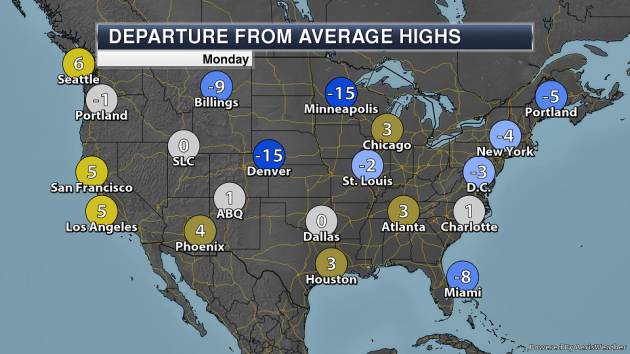 The clipper system responsible for heavy snow in the upper Midwest will continue to move east, bringing snow to the Great Lakes and parts of the Northeast with rain likely in the Ohio Valley to the Deep South. After the frontal passage, however, this rain could change over to snow in these areas, especially into Monday Night. Some snow will be possible across the Rockies. 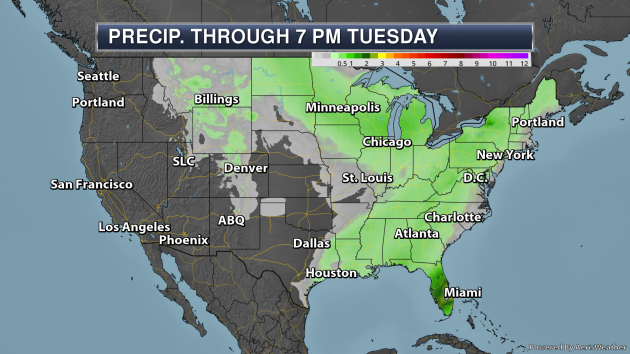 The area getting soaked the most with precipitation through Tuesday will be central and southern Florida, with rainfall tallies approaching three inches in spots. 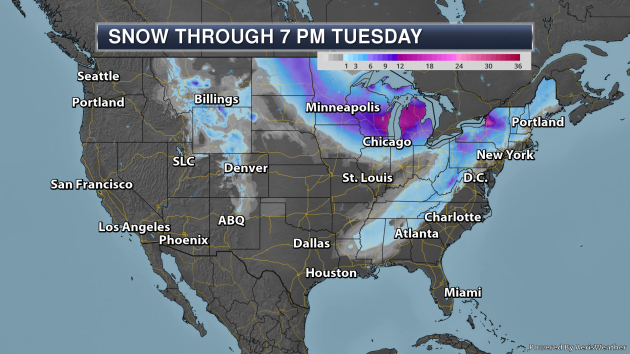 Meanwhile, the heaviest snow will fall north of the low pressure center associated with the clipper, with the potential of over a foot of snow in parts of Wisconsin and Michigan. Heavy lake effect snow will also be possible, especially downwind of Lake Ontario through Sunday Night. You may also notice snow sneaking into the Southeast. As mentioned above, after the cold front passes Monday Night into Tuesday, some snow could fall. Right now totals of 1-2″ will be possible into parts of Louisiana, Mississippi, Alabama, and northern Georgia. I’ll have more on both the clipper and Southeast snow below.

Sunday Morning Radar. Snow associated with a clipper system is already dropping south out of Canada into parts of the Dakotas this morning. Snow has already been reported in Bismarck, Minot, and Yankton.

Tracking Upper Midwest Snow. Snow will continue to quickly spread south and east throughout the day, reaching the Twin Cities during the mid-afternoon hours and into Michigan overnight. This system will likely bring snowfall rates of at least 1 inch per hour in the heaviest bands as it moves across the upper Midwest and Great Lakes. Gusty winds will also cause blowing snow and behind the system could cause blizzard conditions in parts of the Dakotas.

Winter Weather Alerts. Due to the potential of heavy snow over the next couple days, Winter Storm Warnings have been issued from eastern North Dakota into Michigan. Meanwhile, Blizzard Warnings have been issued from central North Dakota to northeastern South Dakota for the potential of snow and/or mixed precipitation as well as blizzard conditions (nearly constant sustained winds of at least 35 mph with visibility being reduced to a quarter mile or less due to blowing snow for at least three consecutive hours). Some of the locations under winter weather alerts this morning include:

Expected Snow Through Tuesday Evening. A band of at least 6” of snow will fall from the Dakotas eastward into the Great Lakes as this system moves through the region over the next couple days. The heaviest snow will fall from east-central Wisconsin into west-central and northern Michigan, where snow totals over a foot will be possible. This snow will have travel impacts to end the weekend and begin the new work week.

Potential Wind Gusts. Strong winds are expected to filter into the region as an arctic front moves through later today into tonight, creating the potential of blizzard conditions across parts of the Dakotas. Strong winds won’t be limited to areas that receive heavy snow, however, as wind gusts could approach 70 mph in parts of western and central North Dakota, western South Dakota, and northeastern Montana that see only up to a couple inches of snow.

Dangerously Cold Air Follows Behind The Snow. A blast of dangerously cold air is still expected to follow this snowstorm across parts of the upper Midwest. Above are expected highs and lows for Tuesday through Thursday across the North Central United States. Areas like the Twin Cities will have the potential to see at least a three day stretch of below zero weather, and even Chicago won’t make it above zero on what is expected to be the coldest day of this arctic outbreak Wednesday. This will be some of the coldest air in several years for many locations. For example, the Twin Cities hasn’t seen a high of -15F or colder since February 2nd, 1996.

Wind Chill Values. Extremely cold and dangerous wind chill values are also expected with this stretch of bitterly cold weather. The worst morning will be Wednesday, as winds of 10-20 mph will make it feel more like -40F to -60F across parts of the upper Midwest. It won’t feel much better during the day either, with wind chill values of at least -30F to -45F expected in some areas, which will last into Thursday morning as well. These wind chills would cause frostbite in less than 5-10 minutes.

Wind Chill Watches. Due to this extended dangerous stretch of cold weather, Wind Chill Watches have already been issued for parts of Minnesota, South Dakota, Nebraska, Iowa, and Wisconsin starting Tuesday and lasting through Thursday morning. I would expect additional Wind Chill Watches to be issued across parts of the upper Midwest, with these eventually being upgraded into Wind Chill Warnings (that would be likely to occur sometime Monday).

Snow In The Southeast. This same system will bring the potential of snow to parts of the Southeast Monday Night into Tuesday as the front swings south and temperatures fall to near or below freezing behind it. The current forecast has the potential of 1-2″ of snow stretching from parts of Louisiana back into Tennessee. This snow could cause travel issues in the region.

Drought turns part of Iran into a new dust bowl

More From National Geographic: “In southeastern Iran, summers have never been for the faint-hearted. The temperature routinely tops 110 F (43.3 C). There isn’t a hint of rain. When, every May, a vicious, hair dryer-like wind, known as the Wind of 120 Days, begins to whip in across the semi-arid flatlands, the entire area wanes under a months-long barrage of sand, cloying dust, and noise.  American soldiers across the border in neighboring Afghanistan are warned to be particularly wary when these gusts pick up. “High winds can turn tent pegs and loose objects into flying missiles (which may not be visible in blowing sand),” cautions “A Soldier’s Guide to Staying Healthy in Afghanistan and Pakistan,” a U.S. army medical manual. Locals are sometimes forced to shout at one another just to make themselves heard amid the breathless whistling.”

Australia’s Heat Wave Is Taking A Toll On People, Animals, Infrastructure And Land

More from NPR: “It’s summertime in Australia, and the country is in the throes of a record-breaking heat wave that has brought suffering to humans, animals and land.Temperatures in the south have soared past 118 degrees Fahrenheit.Australia’s State Emergency Service declared the heat wave a threat to public safety, as an increasing number of Australians have called ambulances and gone to hospitals in Adelaide for heat-associated illnesses.The Australian Energy Market Operator cut power to 200,000 people in the southern state of Victoria after demand increased for air-conditioning.”

How Australia’s Deadliest Fires Made Thousands of Students Fall Behind

More from Earther: “Natural disasters come in all many forms, from hurricanes to wildfires. They all have something in common, though: They ruin people’s lives. And the effects can linger years after the event has passed, especially for elementary school children whose education has only just started, according to a new study.  Published in the Child Development journal Thursday, the study tracked 24,642 Australian children who attended primary schools in the state of Victoria and felt the impacts from the Black Saturday wildfires in 2009. These fires were among the worst the country has seen: 173 people died, thousands of structures burned, and more than 988,000 acres were torched, according to the Country Fire Authority. This new study found that kids’ academic progression suffered roughly a 5 to 6 percent loss as a result of the traumatic event.”